Jun 22, 2020 Dr Michael Dent
In recent years, plastic production has accelerated, with global plastic set production to reach 600 million tonnes by 2030 if production continues at its current rate of growth. Most of this plastic is not biodegradable, with 30-50% of it being produced for single-use applications. This creates a serious environmental problem when the plastics reach the end of their life cycle and plastic waste has become an increasingly pressing issue in recent years. New, biodegradable plastics and better recycling strategies are two promising approaches to help the world cut down on plastic waste. Both techniques are discussed in the recent IDTechEx reports "Bioplastics 2020-2025" and "Green Technology and Polymer Recycling: Market Analysis 2020-2030", respectively. 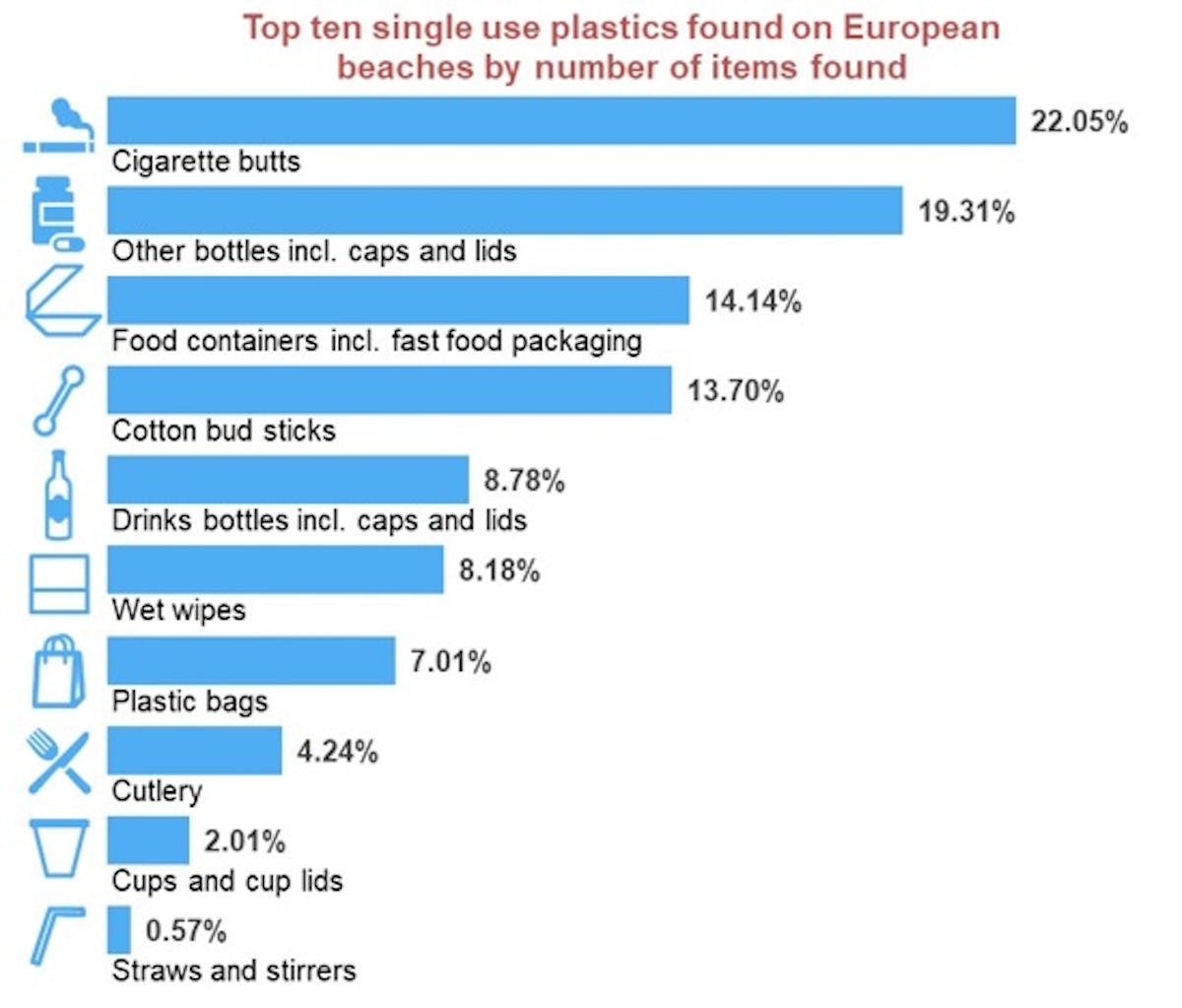 Plastic pollution has a severe environmental impact, particularly for marine environments. Source: IDTechEx Research
An increased focus on biodegradable plastics is a potential solution to the problem of plastic waste. Bioplastics, polymers produced from biological feedstocks, dominate the landscape of biodegradable plastics and there has been a lot of excitement over the last decade around the potential of biodegradable bioplastics, such as polylactic acid (PLA) and polyhydroxyalkanoates (PHAs). Biodegradable bioplastics would break down naturally in the environment, meaning the world could continue to produce large amounts of plastics without having to worry about what happens to them at the end of their lives.
However, the reality is much less straightforward. Firstly, only about half of bioplastics are plastics are even biodegradable in the first place. Just because a material is sourced biologically does not necessarily mean it will break down in the natural environmental and many well-publicised bioplastics, such as the biosourced PET used in Coca-Cola's PlantBottle, are not biodegradable.
The second issue is around what is meant by a "biodegradable" plastic. Most consumers would generally interpret the term to mean that the plastic will be broken down in the natural environment in weeks to months, however many "biodegradable" bioplastics do not fit this definition. PLA for example, is commonly labelled as biodegradable, but will only break down in an industrial composting facility where it can be heated to a high enough temperature where microbes can break it down at an appreciable rate. If a PLA bottle were dumped into the ocean, it would take hundreds of years to break down. Unfortunately, many regions around the world do not have access to these industrial composting facilities, meaning that widespread uptake of PLA plastics probably would not lead to any environmental benefits. This is not the case for all bioplastics - PHAs will break down in the natural environment over months, as will the starch blends and nanocelluloses that have been gaining in popularity in recent years. An overview of the biodegradability of all the common bioplastics is given in the recent IDTechEx report "Bioplastics 2020-2025", as well as a discussion around the nuances of the term "biodegradability" and the end of life options for bioplastics. 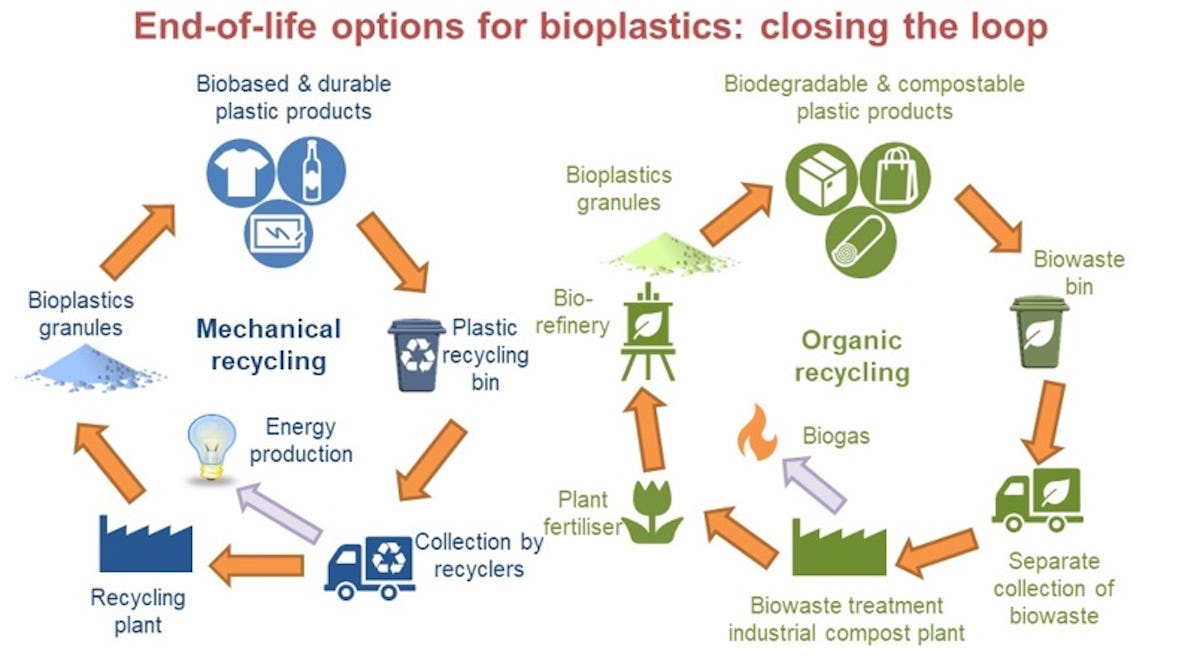 End-of-life options for bioplastics: separate options for biodegradable and non-biodegradable bioplastics. Source: European Bioplastics
Plastic recycling is another potential avenue for overcoming the world's plastic waste problem. Although global recycling efforts have increased in recent years, only a small amount of plastic waste is actually recycled - National Geographic recently described how only 9% of the world's plastic waste is recycled. There is clearly a lot of room for improvement here.
Existing recycling technologies have relied on mechanically sorting and melting plastic waste, which frequently leads to "down-cycling" of materials due to high levels of contamination. However, there is a range of emerging alternative recycling technologies that could lead to further opportunities in the polymer value chain. For example, solvent extraction is a recycling method that can yield a pure polymer with mechanical properties similar or potentially identical to the virgin material. Techniques such as pyrolysis and other forms of depolymerisation can be used to create fuels and chemical feedstocks from waste plastics that can go back into the wider value chain, contributing towards a more circular economy. Each of these techniques, alongside the wider market for polymer recycling, are discussed in more detail in the recent IDTechEx report "Green Technology and Polymer Recycling: Market Analysis 2020-2030".

Opportunities for recycling in the polymer value chain. Source: IDTechEx Research
Both an increased focus on biodegradable plastics and polymer recycling could help the world overcome its problems with plastic waste, with attractive business opportunities in both regions. Both areas also struggle to compete with historically low oil prices that make conventional production and disposal of single use plastics by far the cheapest option, although emerging technologies are helping to end this narrative. Aspects of the systems are in competition with each other - for example, an increased focus on recycling will lead to a smaller potential market for bioplastics, compounding the economic issues that the field faces. However, despite this, both technologies will likely need to grow in order for the world to take meaningful action against its problem with plastic waste.
For further information about end-of-life options in plastics and bioplastics, see the recent IDTechEx reports "Bioplastics 2020-2025" and "Green Technology and Polymer Recycling: Market Analysis 2020-2030" or for the full portfolio research available from IDTechEx please visit www.IDTechEx.com/Research.
PrintForwardTweetLikePinredditShare
Previous
Next