Jul 28, 2021
While they may have struggled to find their place in the market over the past few years, there will be significant adoption of redox flow batteries towards the end of the next decade according to a new IDTechEx market report, "Redox Flow Batteries 2021-2031".

To understand the progress of redox flow batteries in the next decade, IDTechEx considered the following:
"Where will the redox flow battery be postioned in the stationary storage market in the coming years"
"Will the technology be able to compete with Li-ion battery? If yes, for which applications?"
To begin to answer these questions, IDTechEx interviewed the major flow battery manufacturing companies, including Invinity and UniEnergy Technology (UET) and found the outcome of the interviews was clear; the stationary market is heading toward longer storage capacity, generally above four hours of storage. The same response has been given to IDTechEx by major stationary Li-ion battery manufacturers.
Starting from this point, IDTechEx calculated the most-often-stressed by RFB manufacturers Levelized Cost of Storage (LCOS), for Li-ion battery and Redox Flow systems.
As expected, the outcome of the calculation showed a reduced LCOS for RFB. The reason for this comes from the longer lifetime of the RFB systems, due to a reduced capacity fade degradation.

Source: IDTechEx report "Redox Flow Batteries 2021-2031"
After calculating the LCOS for the two systems, highlighting the RFB advantage to provide higher storage capacity, in comparison to LiB, IDTechEx analyzed when and for which application the longer energy storage duration would have been beneficial for the power grid or end-users.
While for end-users the higher RFB CapEx might still play a significant role in the pace of adoption of this technology, for the power grid and particularly front-of-meter applications (FTM), the benefit which these systems can provide is much bigger.
As explained in "Redox Flow Batteries 2021-2031", the main driver for RFB adoption will be the fast adoption of variable renewable energy, due to the advantage the RFBs can provide for stabilizing the power grid. The report also shows that redox flow batteries will possibly take a large share of the stationary storage market, particularly for front-of-meter applications.

Evolution of the Stationary Storage Market

Although the stationary storage market is still in the early stage, IDTechEx has a clear view about how it will evolve, and the growing adoption of variable renewable energy will lead the grid operators to increase the resiliency of the power grid by increasing the amount of energy storage available.
As estimated by IDTechEx, the adoption of variable renewable energy will be strongly dependent on the country, and with it the adoption of energy storage. Although the VRE penetration is one of the key factors for the adoption of stationary energy, it is not the only one.
As previously mentioned, the stationary storage systems will be the way for grid operators to stabilize the power grid from the variability of renewable energy systems, but each country offers a specific scenario regarding the power grid stability, therefore the penetration of stationary energy will depend on the current situation of individual countries. 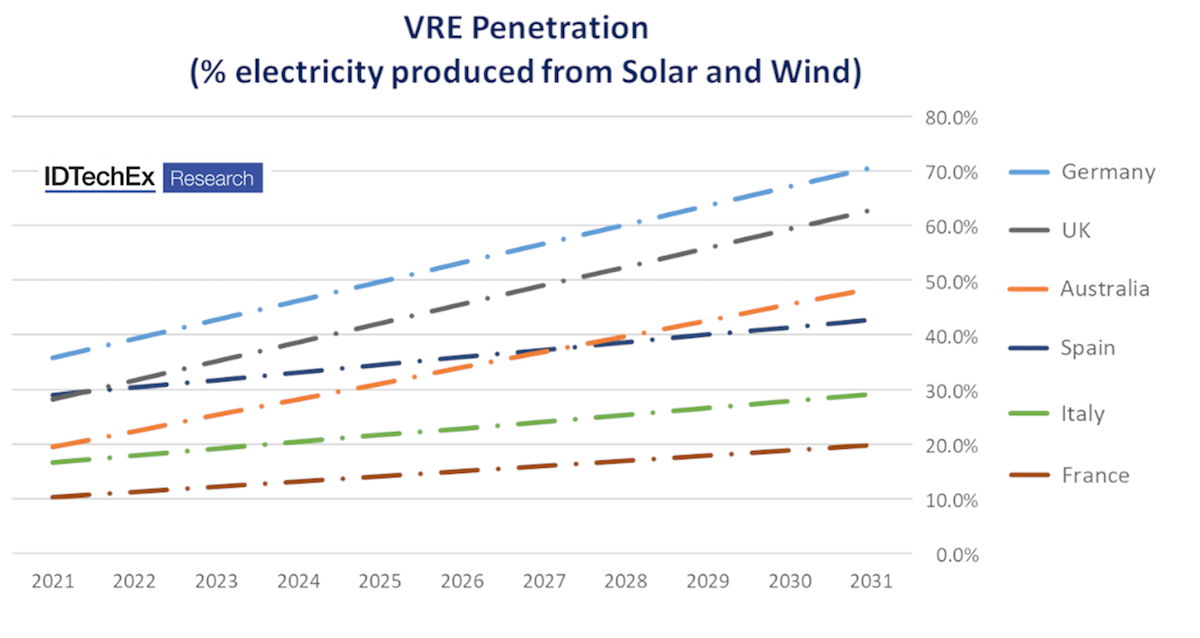 Source: IDTechEx report "Redox Flow Batteries 2021-2031"
These and other considerations have been included in the IDTechEx forecast for the flow battery market, which is at the gateway of the large stationary market.
For more information on this report, please visit www.IDTechEx.com/Redox, or for the full portfolio of Energy Storage research available from IDTechEx please visit www.IDTechEx.com/Research/ES.