Solar fuels: an industry in infancy

Solar fuels: an industry in infancy

Apr 12, 2017 Dr Laura Baers
Solar fuel could be the key to meeting future demands for sustainable energy, with emerging technologies enabling us to harness and convert sunshine into an array of useable fuels. The market for solar fuels is approaching a critical time as technology matures and reaches economic viability.
Solar fuels are seeing significant amounts of research, and investments from high profile advocates such as Bill Gates, who recently commented: "Making solar fuel would be one of those (energy) miracles. It would solve the energy storage problem for when the sun isn't shining. And it would provide an easy-to-use power source for our existing transportation infrastructure."
There are multiple benefits to using solar fuel, such as fuelling the next generation of transport whilst reducing carbon dioxide (CO2) emissions. Solar fuels have distinct advantages over the competition as they can create a sustainable, storable fuel that produces no harmful by-products, and requires no mining, growing or drilling to obtain and does not compete for arable land.
Solar-derived hydrogen (H2) as a fuel has seen significant investment, however, it is not necessarily practical and easily implemented, as existing infrastructure is designed for chemical fuels. An overlooked market in solar fuels is using solar-derived H2 as a feedstock to produce more energy-dense hydrocarbon fuels, such as synthetic natural gas (e.g. methane) or for the sustainable production of other chemicals, such as fertilizer, plastics and pharmaceuticals.
Thus, in the short to intermediate term, a more valuable and immediate use for H2 is to produce chemical fuels capable of using existing infrastructure, and as a replacement for H2 derived from fossil fuels used in the production of various chemicals. 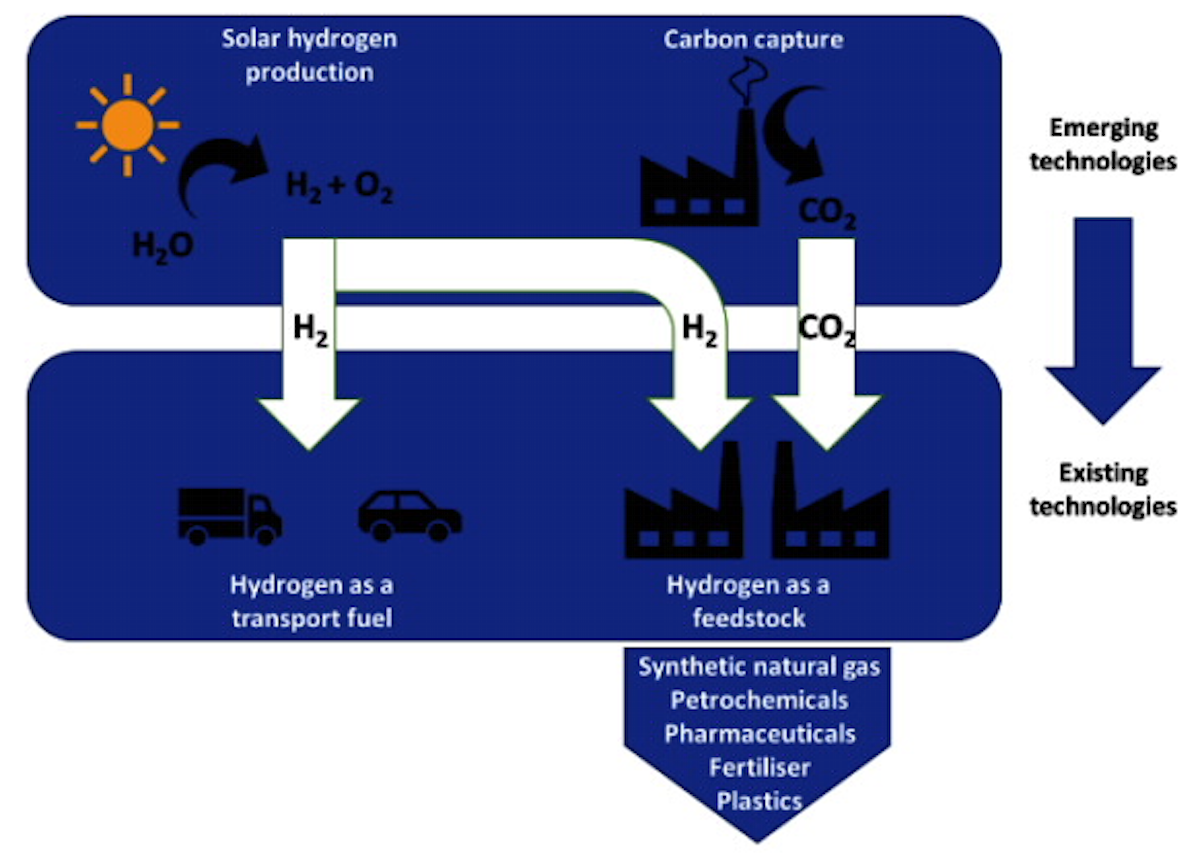 Converting the sun's energy into electricity (photovoltaics) or heat (solar thermal) is well established and carried out on a global scale; last year, the amount of solar power produced worldwide increased by 50%, led primarily by China and the US (SolarPower Europe). However, significant challenges still need to be overcome before solar power is deemed a viable long-term solution that can meet the planet's energy requirements. There is a pressing need to find both a large-scale energy storage system to overcome the intermittent nature of sunlight, and a mechanism to convert the energy captured from light into transportation fuel.
In February this year, HyperSolar demonstrated H2 production using commercially available silicon solar cells, and are currently in the process of developing a demonstration unit of this self-contained and scalable system. Nikola Motors, a company developing a range of electric trucks, have announced they will be building their own solar farms, producing 100 megawatts of electricity to generate H2 via the splitting of water (electrolysis) directly on these sites. This H2 will be used to service their 50 fuelling stations by 2020. 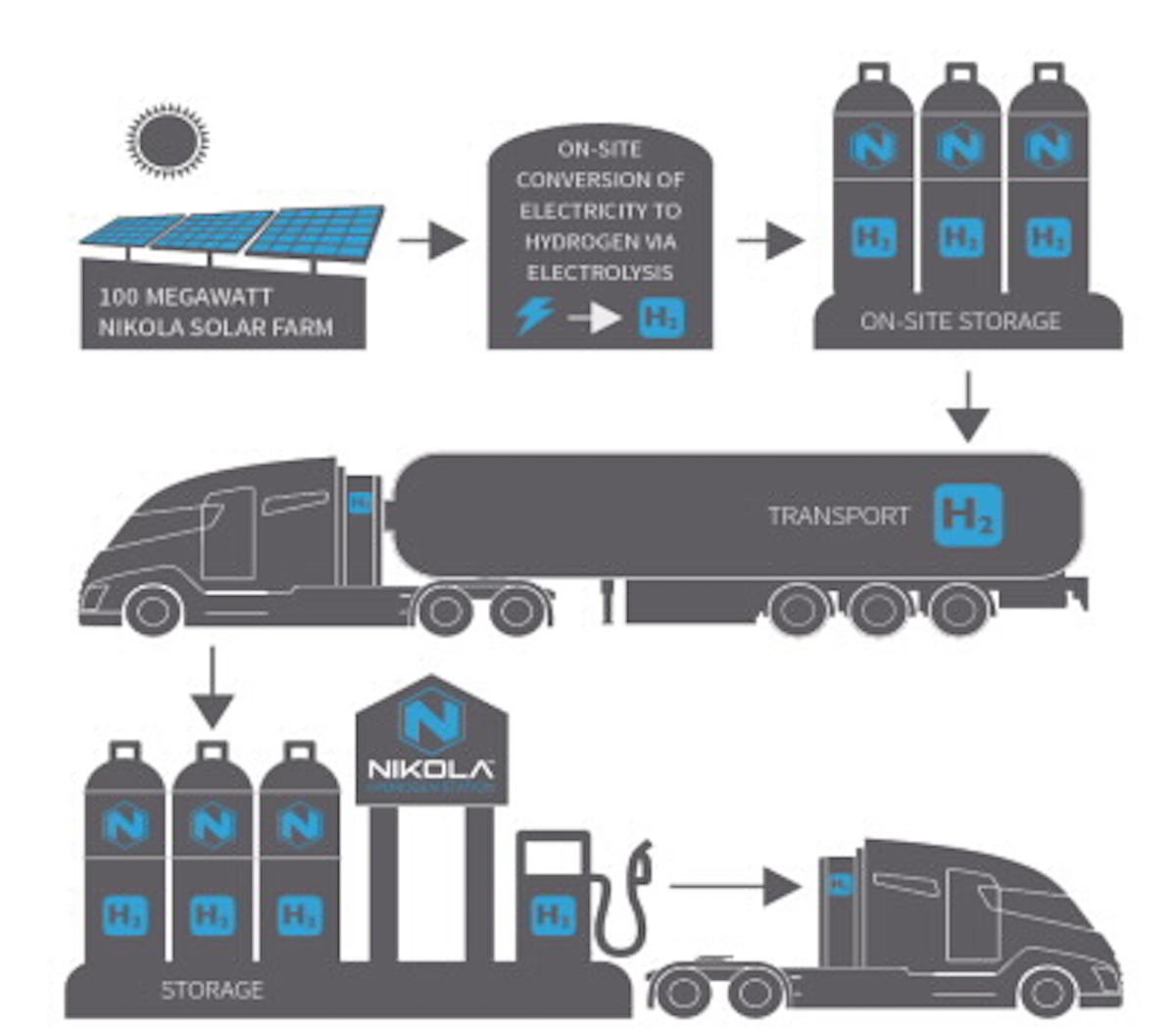 Source: Nikola Motor
Other companies, such as Mitsubishi Chemical Corporation are looking beyond H2 as the end product, focusing instead on mimicking natural photosynthesis (artificial photosynthesis) to drive the production of petrochemical products.
The natural process of photosynthesis in which plants harness sunlight to create food for themselves can be split into three stages: 1. The capturing of sunlight; 2. Using this sunlight to split water into oxygen O2, protons and electrons; 3. Using these electrons to reduce CO2 into chemical energy to fuel the organism's growth.
Efforts to replicate each of the stages of natural photosynthesis have had varying levels of success. We can already harvest sunlight efficiently using photovoltaics (PVs). However, a more difficult task is to cheaply and efficiently split water to produce H2. This has been the focus of much research because it presents a renewable way of producing H2 fuel, which is used as transport fuel and as a raw material in many industries.
Mimicking the last step in the process - performing light-driven CO2 reduction to fuels - is even more challenging and is still in its infancy.

At present H2 is used as a feedstock for a large number of industrial processes. This H2 is produced by steam reforming of natural gas, which is relatively inexpensive, but energy-intensive and consumes fossil fuels. An alternative approach uses only water to gain H2, splitting the water into its components (O2 and H2) by passing current between two electrodes immersed in an electrolysis cell. O2 evolves at the anode (positive electrode), and H2 at the cathode (negative electrode).

Electrolysis of water. Source: HyperSolar
Electrolysis can be driven by a photovoltaic (PV) to make it light-driven (PV-electrolyzer systems), which can achieve conversion efficiencies of about 12%. An advantage of this system is that both components are commercially available, although currently the system is high in price. Perhaps unexpectedly, the cost comes mainly from the PV component rather than the electrolyzer; this is due to the PV array needing to be substantially larger in area than the electrolysis cell. However, using solar concentrators may bring down the cost of these systems considerably, nearing on the U.S. Department of Energy's goal of reducing the cost of H2 production to $2-4/gallon of gasoline equivalent by 2020.
A less developed strategy is to combine the two systems. These photoelectrochemical (PEC) devices carry out both light collection and electrolysis. To do this, one or both of the electrodes are replaced with semiconductors. Therefore, because multiple platforms are not required, the cost of material structures is minimized, and energy loss is reduced as there are less cell connections.
However, it is hard to achieve simultaneous high conversion efficiency and long-term stability due to corrosion in PEC devices. Suitable materials for the photoelectrodes are hard to come by as they have complex requirements (efficient light absorption and charge transfer, chemical stability, and low cost). Researchers at Caltech and Berkeley recently reported using a high-throughput method of computation and fabrication to identify 12 new potential photoanodes over the course of two years. In the long-term, the desire is for a system that uses printable materials to make cheap, large-scale and flexible reactors.
The problem with producing H2 by light-induced water splitting is not one of efficiency, with conversion rates of 22% solar energy to H2 being reached, but one of cost. Fossil fuels are not expensive, and nor is the current way of producing H2 (steam reforming of natural gas), which costs around $2/kg. By contrast, making H2 by electrolysis is thought to cost around $5-7/kg, and increases substantially more when you want to achieve the best efficiencies possible.
H2 can be used itself; however, it isn't ideal as a fuel because the infrastructure to support it doesn't exist. Whilst numerous companies are diverting funds away from fuel cells, which are powered by H2, it pays to remember that this is not it's only use. Instead, a more valuable and immediate use for H2 is for making more energy-dense hydrocarbon fuels, such as methane and ethanol, or for the sustainable production of other chemicals, such as ammonia for fertilizer, plastics and pharmaceuticals.

Bacteria to the rescue?

In an ideal world, we would produce energy-dense fuels such as ethanol and methanol directly from light. Not only would this be far more efficient than using H2 as a drop-in fuel, but it could utilize waste CO2 from factories and power plants.
This presents two challenges, the first is developing methods to efficiently capture waste CO2. The second is making fuels from CO2; something that occurs with ease inside a living photosynthetic cell, is not such a trivial task outside of it. Unlike the splitting of water, this process involves multiple steps. Furthermore, the natural catalysts are self-healing and specific to each step of the process. So synthetic catalysts need to be incredibly durable and have high specificity; currently, there are no realistic candidates. An alternative to finding synthetic catalysts for fixing carbon is to get bacteria to do the job instead, so-called 'living catalysts'. Researchers at Harvard have used bacteria as living catalysts to produce renewable chemicals such as ammonia, which can be used to fertilize crops, consuming CO2 from the atmosphere in the process.
In the short to intermediate term significant investment is needed in infrastructure to support solar H2 for it to become a viable option as a direct fuel source. However, as research and investment continues to bring the cost of solar H2 closer to that of fossil fuel derived H2, an increasing uptake of H2 as a feedstock for liquid transportation fuels and chemical industries is likely. Methods which utilize both solar H2 and waste or environmental CO2 will also become more desirable as technologies to capture CO2 advance.
Further research is needed to determine the best methods to artificially recreate photosynthesis both efficiently and cheaply. Whether this will take the form of a chemical/materials approach, or utilize living organisms is a question that still needs to be answered.
Top image: Wikipedia
PrintForwardTweetLikePinredditShare
Previous
Next