Nov 19, 2015 Dr Xiaoxi He
Oakridge Global Energy Solutions, Inc., a publicly traded company (OGES) with a market capitalization of over USD $400,000,000 recently announced its plan to fully utilize the many patents developed & owned by the company on solid-state batteries. Oakridge Global Energy Solutions will complete the last phase of pre-production prototyping in early 2016 and will be ready for full commercial product and manufacturing in late 2016 to early 2017. Commercialization of solid-state battery indicates a new era for the US $135bn addressable battery market in a decade. IDTechEx Research forecasts that the market for solid-state batteries will exceed $4bn in 2026 - see Advanced and Post Lithium-ion batteries: Technologies and Markets 2016-2026 for further information. 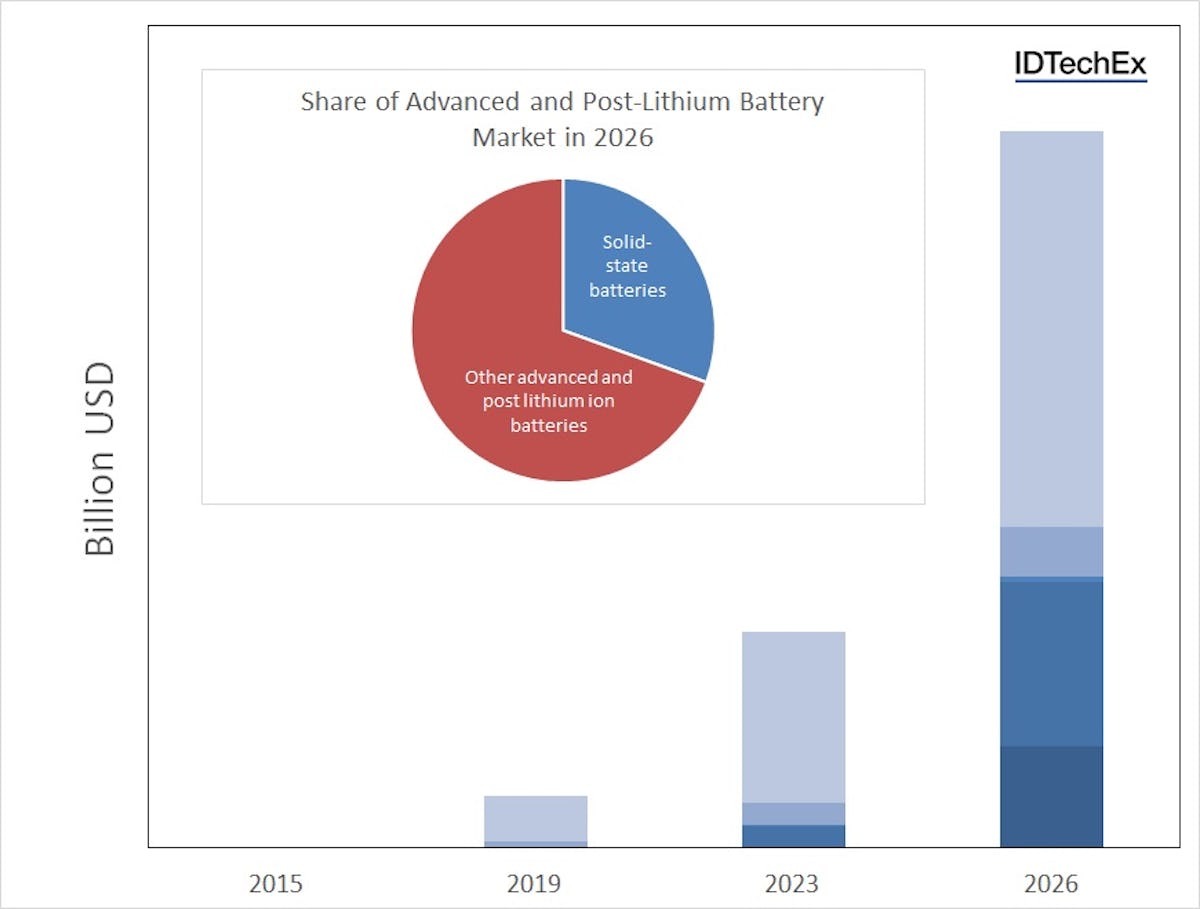 A typical battery cell consists of cathode, anode, separator and electrolyte. One of the most successful commercial batteries is the lithium-ion technology, which has been commercialized since 1991. Most current lithium-ion technologies employ liquid electrolyte, with lithium salts such as LiPF6, LiBF4 or LiClO4 in an organic solvent (e.g. alkyl carbonates). However, the solid-electrolyte interface (SEI), which is caused as a result of the de-composition of the electrolyte at the negative electrode, limits the effective conductance. Furthermore, liquid electrolyte needs expensive membranes to separate the cathode and anode, as well as an impermeable casing to avoid leakage. Therefore, the size and design freedom for these batteries are limited. Furthermore, liquid electrolyte has safety and health issues as it uses flammable and corrosive liquids.
In solid-state lithium ion batteries, both the electrodes and the electrolyte are solid-state. Solid-state electrolyte normally behaves as the separator as well. It is safer, although all of the organic electrolytes used are flammable. Solid-state electrolytes allow scaling due to the elimination of certain components (e.g. separator and casing). Therefore, they can potentially be made with a higher energy density and power density. In addition, they are more resistant to changes in temperature and physical damages occurred during usage. Therefore they can handle more charge/discharge cycles before degradation, promising a longer life time.

Solid state batteries can be a game changer

Solid-state batteries can be a game-changer in electronics, robotics, electric vehicles, medical devices and military where better safety, longer cycle life and potentially higher energy density are required. Toyota has started to develop all-solid-state batteries since 2010. As the batteries used for electric vehicles usually require longer development time, positive results are not expected to be seen in less than 8 years. An easier entry is consumer electronics. The batteries going to be commercialized by Oakridge Global Energy Solutions are targeting Internet of Things (IoT) markets and those batteries are thin, tiny, easily to be used in small electronic gadgets.

Difficulty is the material selection