Will Huawei Survive? A Comprehensive Analysis from IDTechEx

Will Huawei Survive? A Comprehensive Analysis from IDTechEx

Oct 20, 2021 Dr Yu-Han Chang
Under US sanctions, Huawei's revenue in the first half of 2021 was RMB 320.4 billion, which despite COVID-19 is a 38% decrease from RMB 454 billion in the same period last year; Xu Zhijun, Huawei's rotating chairman, pointed out that Huawei's goal is to survive.
IDTechEx has recently launched the new version of their market research report on 5G - "5G Technology, Market and Forecasts 2022-2032". Some of the findings from the new report are presented in this article.
The smartphone business was once one of Huawei's largest sources of revenue. However, under the influence of the U.S. ban, Huawei's smartphone revenue has fallen sharply. Huawei said that in the first half of 2021, the total revenue of consumer products including smartphones was 47% lower than that of 2020. Huawei was forced to shift its strategic focus away from its once most profitable sector.
Huawei first stocked up on nearly a year's worth of chipsets and electronic components to mitigate the impact of the U.S. sanctions on its 5G supply chain, which catalyzed the global semiconductor shortage. Afterwards, Huawei sold its smartphone subsidiary "HONOR" to Shenzhen Zhixin New Information Technology Company in 2020, so that HONOR could get chipset supply from US vendors such as Qualcomm and survive. So far, Huawei's smartphones introduced this year have all been 4G-only, indicating that the company has officially run out of the 5G chipsets it had stocked up before and is struggling to find another. Rumors are saying that Huawei may sell the rest of its smartphone business this year, however, Huawei has denied this. Nonetheless, it is no doubt that Huawei's smartphone business is unlikely to return to its former glory anytime soon. 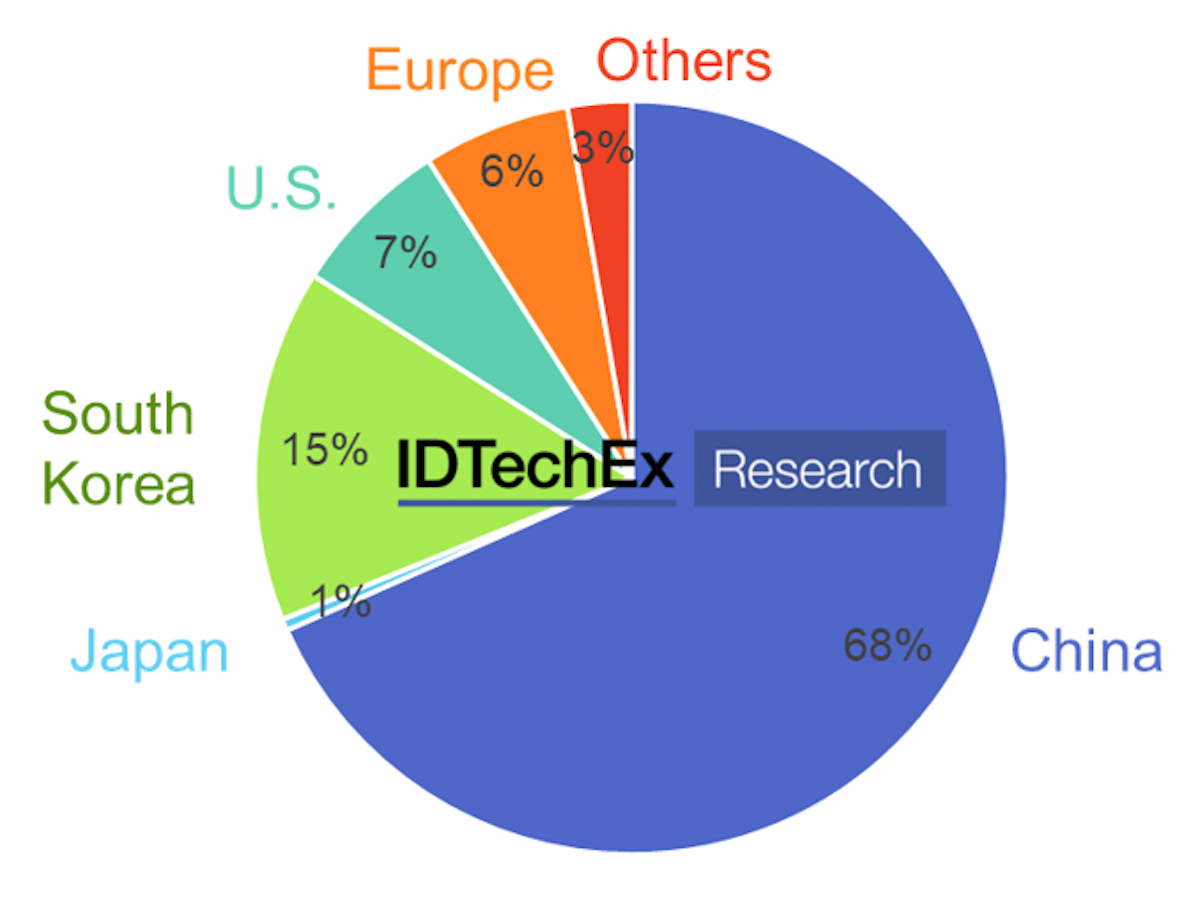 5G mid-band micro base stations market by region (2020). Source: IDTechEx - "5G Technology, Market and Forecasts 2022-2032"
Because of the huge 5G expansion in the Chinese market, Huawei's infrastructure sector appears to be more solid. China accounts for over 60% of the total 5G infrastructure industry, according to IDTechEx's recently released market research report "5G Technology, Market and Forecasts 2022-2032". Huawei is China's leading 5G system vendor. According to the results of 2021 5G infrastructure bidding auctions published by China Mobile and China Telecom, Huawei secures around 60% of the share. Looking ahead, the 5G infrastructure market will continue to grow in China. It is also important to recognize the Chinese government's impact on emerging countries such as Africa and Southeast Asia. Though 5G growth in those emerging countries is slower than in developed nations, it will happen, and Huawei will play a key part in that since Huawei is able to deliver 5G systems at the lowest market price, as well as thanks to the Chinese government's efforts.
After the breakdown of its smartphone business, Huawei began to significantly invest in two important areas: digital transformation and the automotive sector. The growing need for digital transitions in China, along with the Chinese government's strong push, will allow Huawei to expand in this area. This is proven by the fact that revenue in Huawei's enterprise sector in the first half of 2021 is 18% higher than in the same period in 2020. Furthermore, Huawei is currently investing heavily in software development, which was previously not their primary emphasis. Technologies such as big data analysis and artificial intelligence that will define the future of telecommunications and associated applications are now a significant research priority for them. Autonomous vehicles will require 5G connection to reach their full potential, and China's autonomous vehicle industry is massive. Huawei stated this year that it will invest RMB 28.3 billion in autonomous driving and electric car technologies, and it has already begun to collaborate with local automakers on several projects.
So, will Huawei survive? They are suffering, but there is no indication of Huawei giving up. Given the enormous size of the Chinese domestic market, their role in the booming 5G infrastructure rollout, major technology investments in key future trends, and the Chinese government's financial and political support, Huawei's odds of changing the tide in the future are not bleak.
For further information on 5G including regional development, player analysis, market forecasts, application case studies, and technology benchmarking studies see "5G Technology, Market and Forecasts 2022-2032". Sample pages are available for all IDTechEx reports, please contact Research@IDTechEx.com to find out more.
For more information on this report, please visit www.IDTechEx.com/5G or for the full portfolio of 5G research available from IDTechEx please visit www.IDTechEx.com/Research/5G.
IDTechEx guides your strategic business decisions through its Research, Subscription and Consultancy products, helping you profit from emerging technologies. For more information, contact research@IDTechEx.com or visit www.IDTechEx.com.
PrintForwardTweetLikePinredditShare
Previous
Next