20191119 Dr Michael Dent
2019 has been a big year for plant-based meat substitutes. Spurred on by consumer perceptions of healthiness and a global megatrend towards conscious consumptions, sales of plant-based meat grew by almost 40%, compared with 2017. In the three months after going public, plant-based burger maker Beyond Meat's share price surged by 500% and rival Impossible Foods secured an additional $300 million in funding.
The recent IDTechEx report, Plant-based and Cultured Meat 2020-2030, projects this growth to continue, with the global plant-based meat market reaching $27 billion by 2030. But what does the immediate future look like for plant-based meat? This article looks at what happened in the plant-based meat industry in 2019 and explores what's in store for 2020. 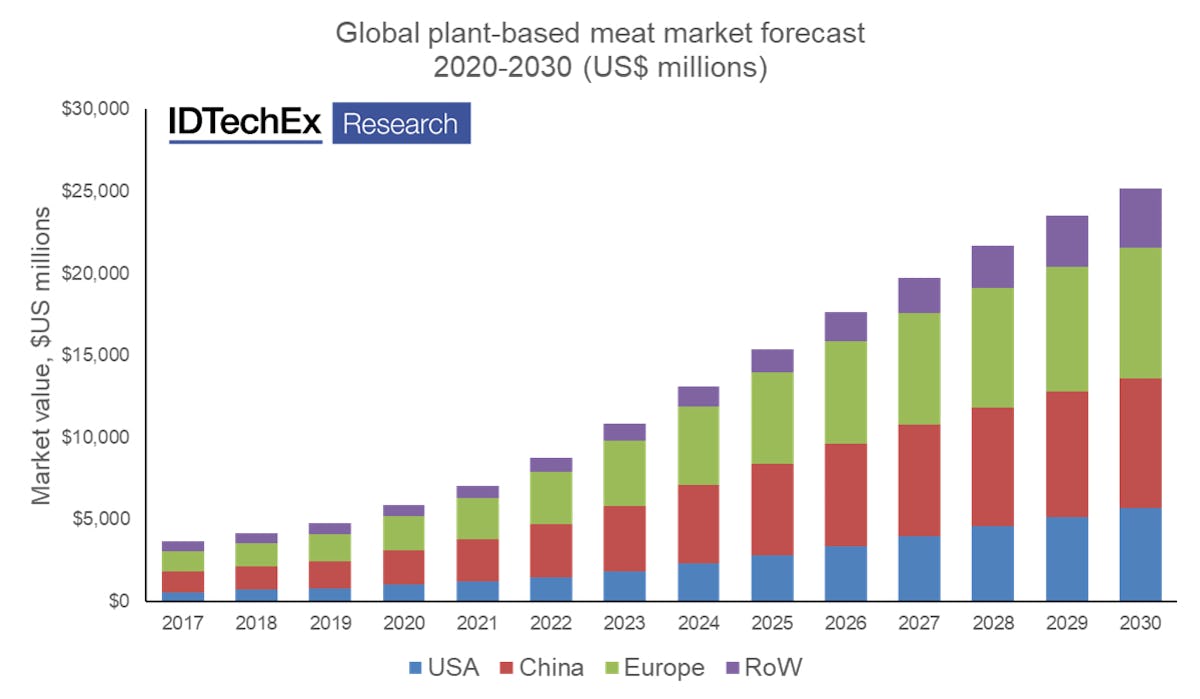 The industry will keep growing, spurred on by fast food and conscious consumption

Plant-based meat is finally shaking off its reputation as a poor imitation of the real thing. Rather than just targeting vegetarians, plant-based analogue producers like Beyond Meat and Impossible Foods are targeting the 95% of consumers who eat meat. These consumers are less likely to compromise on quality for ethical reasons than vegetarians. As such, there is a serious R&D focus on product quality and exact replication of meat, something that was less of a focus in previous generations of meat substitutes. This has helped contribute to the explosion in sales of plant-based meat products and will likely continue into 2020.
Despite only around 5% of American consumers being vegetarian or vegan, 54% of American consumers want to reduce their meat intake, with health being the biggest driver, closely followed by concerns over the environmental impact and ethics of the meat industry. Plant-based meat products are viewed as healthy alternatives to their meat counterparts, enabling consumers to enjoy burgers and nuggets guilt free. However, this could be seriously problematic for the plant-based meat industry - products often contain just as much fat and salt as the meat products they are replacing and so consumer backlash is a risk. Over the last few years, improving the taste and texture of plant-based meat has been the main R&D focus. Moving into 2020 and beyond, the focus will shift towards making these products healthier.
Another major factor in the surge of interest in plant-based meat has been the partnership with fast food providers. Products like the Impossible Whopper in Burger King gave consumers the ability to try plant-based meat without having to commit to buying a full pack in a store. Consumers love customisation in fast food, and plant-based products are viewed as a healthy alternative that lets them continue to enjoy their favourite fast food products. In a trial run at KFC stores in Atlanta, Beyond Meat's trial chicken analogue sold out in 6 hours. 2020 will likely see fast food stores expand their plant-based meat options, further improving the consumer exposure of the products. 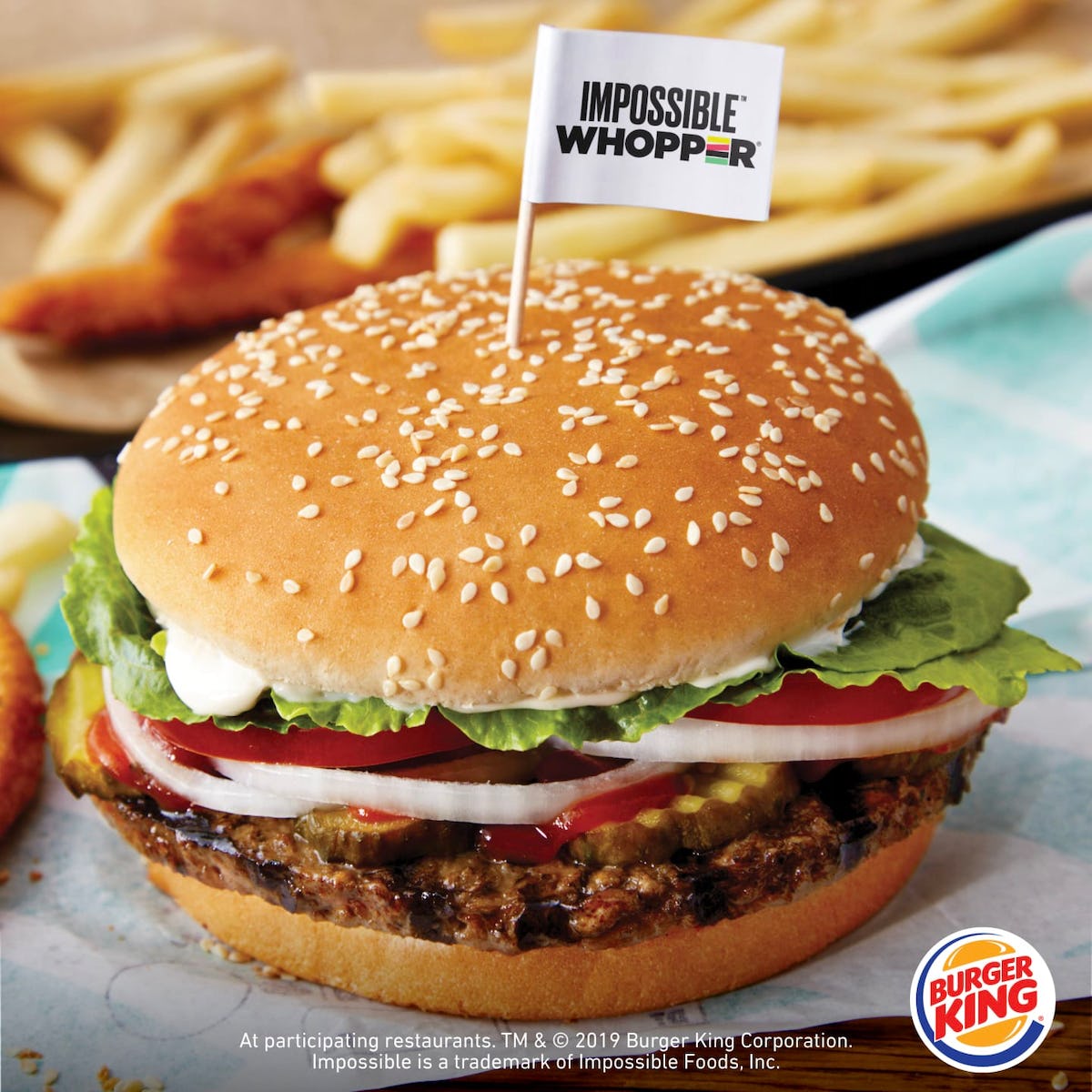 The major food and meat companies are not ignoring the rapid rise of plant-based meat. At the Good Food Conference 2019, meat giants JBS, Tyson Foods and Perdue Farms spoke about rebranding themselves as "protein companies", with JBS launching a new plant-based meat brand in Brazil and the UK, and Perdue Farms launching Chicken Plus - breaded chicken products blended with vegetable proteins. US retailer Kroger also announced the launch of its own private label plant-based meat analogue under its Simple Truth brand. In 2020, we are likely to see many established food companies launch their own plant-based meat products, which could begin the commoditisation of plant-based meat.
This is unlikely to be good news for Beyond Meat and Impossible Foods. Many have questioned whether Beyond Meat's meteoric rise in share price is sustainable - the company's $9 billion valuation means that investors are paying $50 for every burger Beyond Meat sells. Beyond Meat's products are expensive, with its hamburgers costing 2-3 times that of a normal hamburger. As the first company to bring plant-based meat to the masses, it was able to charge this premium for its products. However, as the industry becomes more competitive and the plant-based meat products themselves become increasingly commoditised, Beyond Meat will struggle. Major food companies such as Tyson Foods and Kroger have more money and better distribution than Beyond Meat and will also charge less for their products. This will force Beyond Meat to either cut prices or lose market share, both of which will be bad for investors and could likely result in a crash in its share price. Whilst plant-based meat may be here to stay, competition from established players could be seriously harmful to young companies such as Beyond Meat and Impossible Foods, something that could begin to take shape in 2020.

The labelling argument will get more intense

As plant-based substitutes for animal products get more popular and capture more market share, some parts of the meat and dairy industries are fighting back. This involves lobbying for labelling restrictions on terms such as "burger", "meat" and "milk", claiming that using them to refer to plant-based products is confusing to customers. Earlier this year, the state of Missouri passed a law banning the term "burger" from being used in relation to plant-based meat.
A similar controversy is taking place in Europe, where EU regulations are being passed, restricting the use of certain terms. In 2017, the EU passed laws stating that "milk", "cheese" and "yoghurt" can only be used for products derived from animals, although there are multiple exceptions for "traditionally used terms", such as "coconut milk" and "nut butter".
These rulings have been extremely controversial, with opponents claiming consumers are unlikely to confuse plant-based meat with conventional meat and labelling restrictions are an anti-competitive move designed to protect the meat industry. Industry advocate The Good Food Institute recently filed a lawsuit against the state of Missouri, arguing that the labelling law infringes on the First Amendment. The Good Food Institute has stated that "No one buys Tofurky "Plant-Based" deli slices thinking they were carved from a slaughtered animal any more than people are buying almond milk thinking it was squeezed from a cow's udder." As we move into 2020, these arguments are set to get more intense as both the plant-based and conventional meat industries face threats to their sales.
The IDTechEx report Plant-based and Cultured Meat 2020-2030 covers each of these predictions in more detail, giving a market and technology overview of both the plant-based and cultured meat industries and forecasting growth over the next decade.
Top image: Pixabay
PrintForwardTweetLikePinredditShare
Previous
Next