Juni 26, 2017 Dr Harry Zervos
Cognitive buildings is not just the latest buzzword - although it can be exactly that in many occasions. In the context of overarching trends such as the Internet of Things and its intercept with building automation, it feels like a most natural evolution of what we think of today as a move towards smarter buildings. Coined by IBM in 2016, the term describes an integrated approach to the deployment of technologically advanced solutions that can turn data into actionable insights, using cognitive computing and comprehensive facilities management capabilities, to better manage buildings. The question is, what enabling technologies in specific are helping realize this transition, and how fast is it expected to happen?

If we take IBM's word for it, the transition from smart to cognitive is already happening and we can already witness examples of it in a variety of settings. A lot of the driving forces behind the change aren't even dependent on technological innovation, but on pure logic and a few calculations on how to save on operational expenses and improve employee productivity.
At IBM, featured as a case study in a 2009 paper on telework by Janet Caldow from the Institute for Electronic Government within IBM Corporation, 40 percent of its 386,000 global employees at the time did not have a traditional office and many tens of thousands more worked outside their offices at least some of the time. Since 1995 and by 2009, office space was reduced by 78 million square feet; 58 million square feet were sold at a gain of $1.9B; sublease income exceeded $1B; and, in the U.S. alone, annual savings amounted to $100M.
My first exposure to what should have been, I now realize, an indication of things to come was indeed around that time as, about 8 or 9 years ago my partner at the time started working for Cisco in Amsterdam. He explained to me how he didn't have a desk at work. At least not one (x,y,z) predefined Cartesian location within the Cisco building, with a desk on which he could spread teddy-bears, pictures of mom, favorite coffee mugs etc. He would always have a desk available to him upon arrival in the office every day, but where that desk would be would be decided when he would get to the office each day, allocated to him for the duration of his stay, without any guarantee he'd be sitting in the same spot the next day. Every evening he would clear all personal items off of each desk, just like all of his colleagues would, and off to home he would return, with a burning uncertainty inside: 'Where, oh where will my desk be tomorrow?' Clearly, man is burdened by much more important worries than this one, don't you think?

Office building as a service

This integrated approach is very similar in its general traits as those emerging in a variety of sectors, as diverse as construction or agricultural robots: in a connected world, specific products and components are far less relevant than services, complete with sensor output converted from bare numbers to actionable data. And as always with services, one tries to optimize them to satisfy each customer separately, only the customer in the case of an office building is an employee. Let's dig into this example a bit deeper: 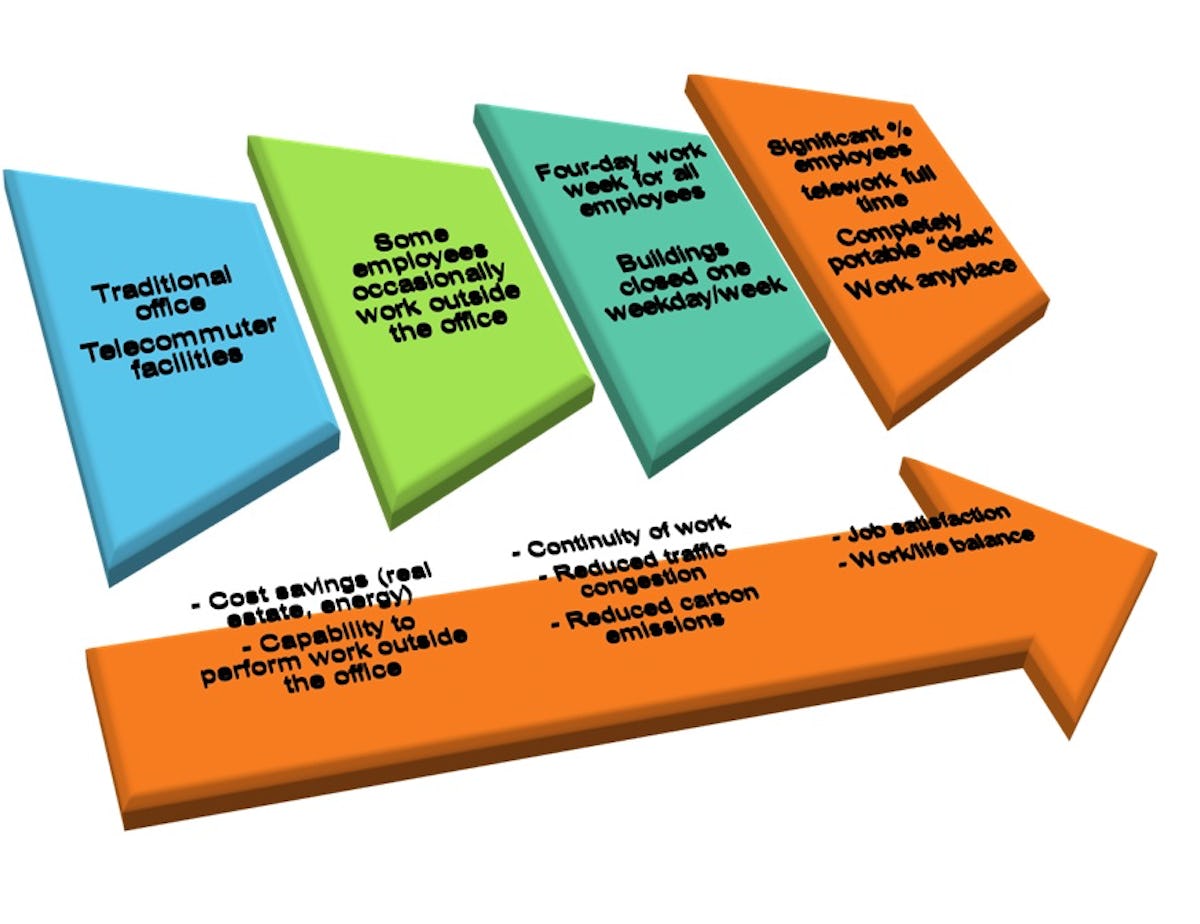 The telework continuum. Source: Working outside the box, Janet Caldow, The institute of electronic government, IBM corporation, (2009)
In a recent conversation with Graham Martin, VP of Strategic Alliances at EnOcean, we started discussing a key statistic on commercial buildings and how today they have come to operate at approximately 70% occupancy on average, allowing for employees on holiday, those working from home etc. Any intelligent facilities manager would be able to work that statistic into day to day operation. IBM for instance, operates a building in the UK for 1900 employees with just 1100 work stations, Martin mentioned to me. In addition, relevant research into productivity has found that an employee working in a comfortable (according to him) work environment is up to 15% more productive. Hence by combining the implementation of a non-dedicated work desk approach, with localized control of micro-climate around different employees through the use of environmental sensors, all controlled by a computer intelligent enough to change air conditioning, temperature and humidity settings according to specific people's preferences, bingo! Here's a building that's aware of who is within it and where and how it can save on HVAC, electricity and real estate costs by monitoring the presence of employees in different locations within it.
Such deployments might require a multitude of sensors, but that's extant technology:
Examples of enabling tech include: 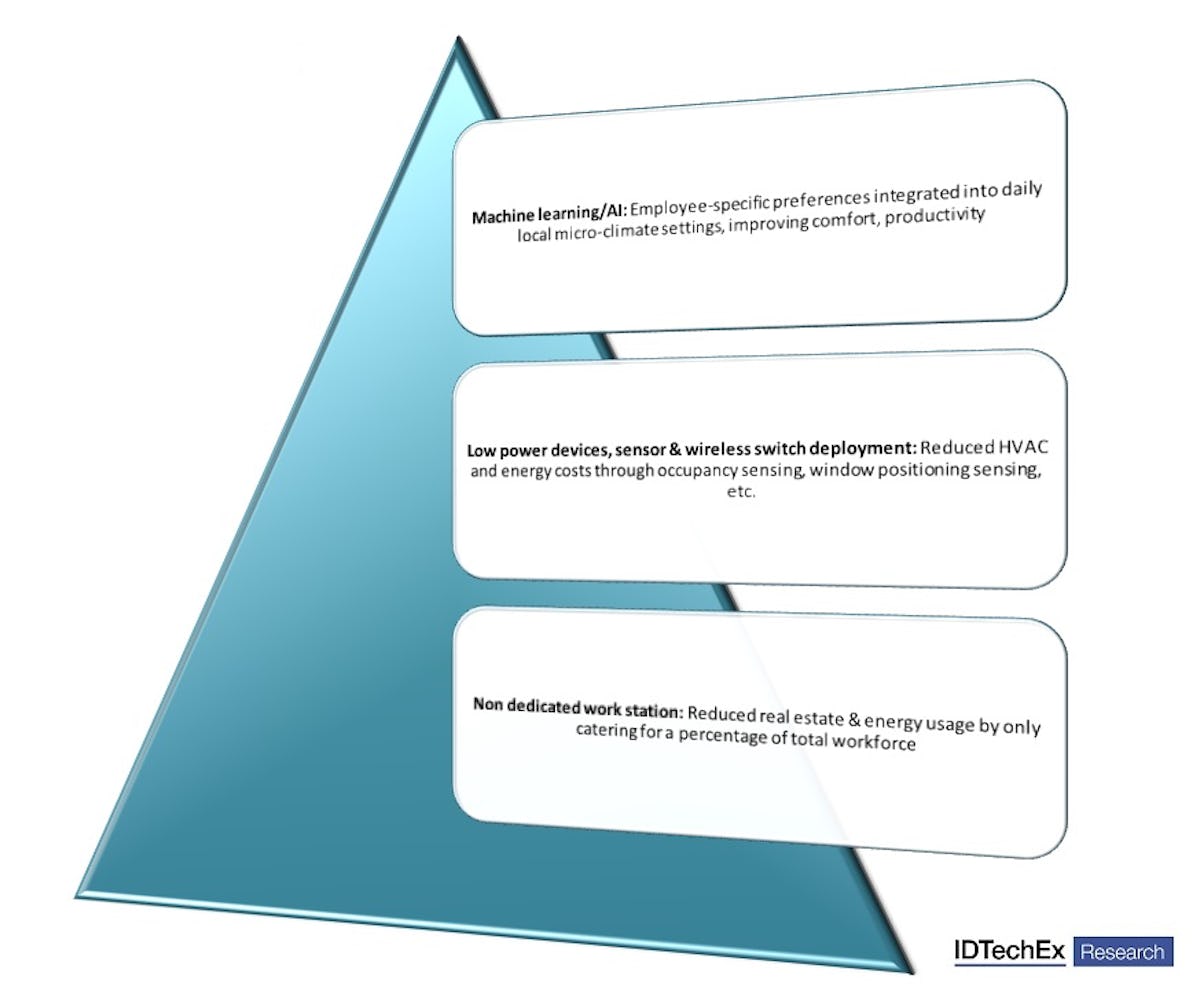 Additional layers of technological innovations can lead to improved productivity while mitigating building operational costs. Source: IDTechEx Research.
For more information on energy harvesting technologies, the IoT, environmental sensing, AI or where to recycle office desk plush toys for which you do not have a use anymore please visit www.IDTechEx.com/research.
PrintForwardTweetLikePinredditShare
Previous
Next