März 06, 2013 Cathleen Thiele
More and more consumer electronics devices feature a touch screen, which is already considered a must have for new devices. The next big topic will be haptic feedback solutions outperforming the poor vibration-based feedback that is the standard today. Adding haptic and sound feedback to touch screens using electro active polymers (EAPs) will be a featured topic at TCF LIVE Europe 2013.
Today, the most common haptic actuation method is inertial haptics using electromechanical motors. This is used in every mobile phone and increasingly in haptic touch screens, but is only capable of giving a monotone vibration feedback. Mounted to the device housing, the entire device vibrates when activated.
Haptic displays featuring electroactive polymers that deform the surface have recently been demonstrated by US company Strategic Polymers, presenting at TCF LIVE!. Their patented electromechanical polymer actuators (EMP) can be as small as 100 micron per unit and are only 3 milimeter in thickness, which can be fitted nicely to a mobile phone touch screen to simulate a keybord. Within miliseconds the actuators will bend upwards after a voltage has been applied. Christophe Ramstein, CEO of SPS, told IDTechEx their mid-term target is to be a leader in haptics for mobile consumer electronics, which is expected to rise to 60% market penetration by 2016. 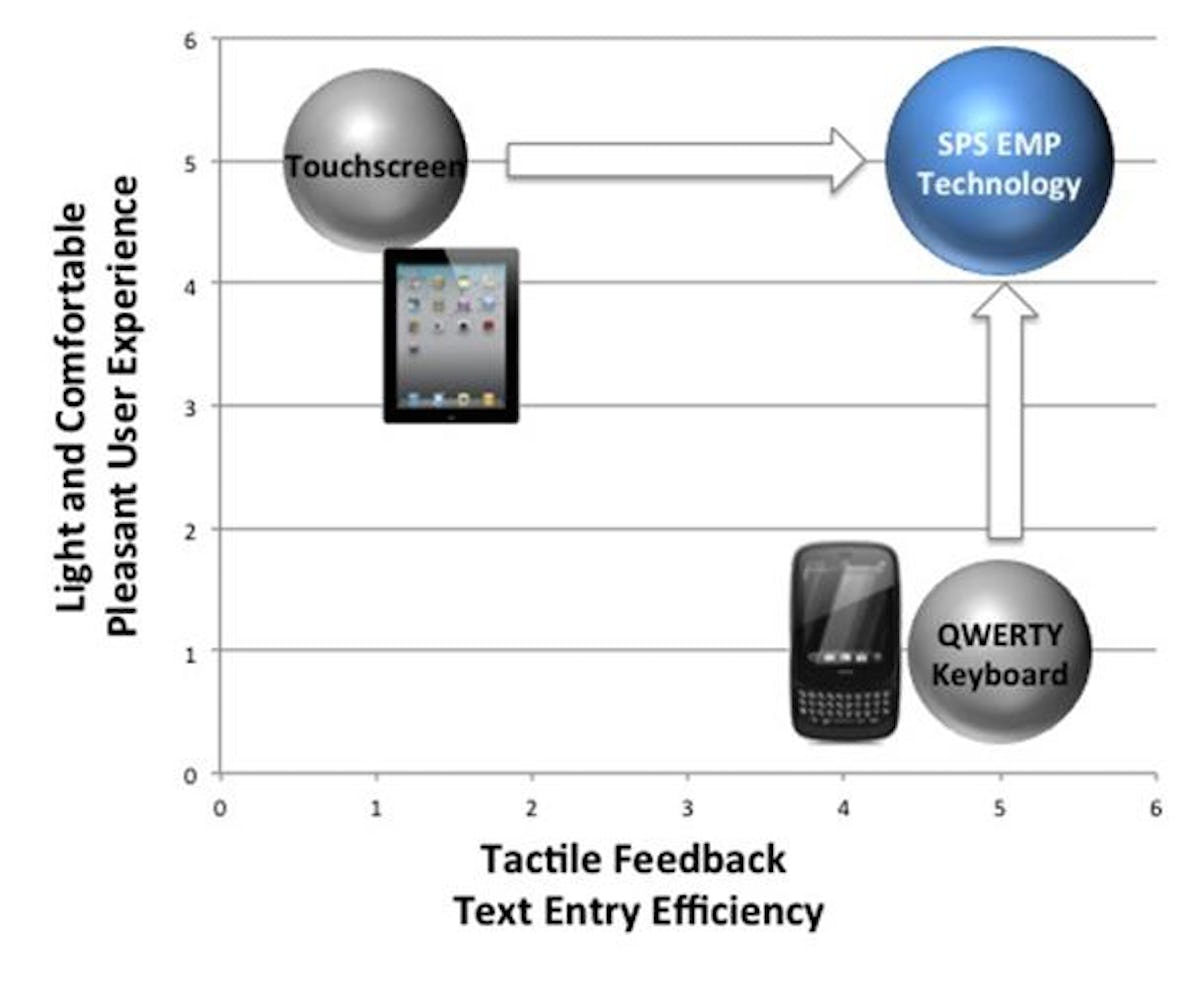 Source: Strategic Polymers Inc.
At TCF LIVE! attendees will develop a detailed understanding how this technology can work together with the other parts of the touch screen device, like the transparent condutor film (TCF). The conference will cover all promising applications of TCF, including replacement of Indium Tin Oxide (ITO), touch screens, sensors and beyond.
Additional presentations on haptics and sensing touch surfaces will be given by Microsoft, Tactonic Technologies, Synaptics, Displax Interactive Systems and Visualplanet. The latest agenda information can be found on the TCF LIVE website: http://www.idtechex.com/printed-electronics-europe/tcflive.asp
Biggest challenge for EAP applications in the consumer electronics space is cost. To compete with conventionally used systems the price per item needs to come down to $1-2, which still presents a challenge for most EAP actuators and is the main reason companies trying to commercialize their products target high-fidelity and large screen applications first. Once the price barrier is achieved penetration of mainstream consumer electronics devices, such as mobile phones, will be certain.
Originally, the electroactive polymer actuation has been developed and licensed by Artificial Muscle Inc., a Bayer MaterialSciences LLC. company. Short and mid-term focus for their EPAM actuators as well is integration of high definition haptic feedback for portable electronics and peripherals (such as mobile phones, portable gaming consoles, gaming mice, keypads, over-ear headsets etc). AMI will also address large area touch screens over 10 inches in the need of high definition haptic feedback, such as casino tables, and even laptops, making keyboards much thinner, for example, by removing the tactile dome switch.
For more information on electro active polymers and applications, such as actuators, sensors and energy harvesting, please see Electroactive Polymer Devices 2013-2018.
For more information, see www.IDTechEx.com/TCFLive for the evolving speaker and exhibitor list and to register early for the best discounts. This IDTechEx event, to be held on April 17-18 in Berlin, is co-located with Printed Electronics Europe 2013 and attendees will have access to ALL sessions, covering related topics such as non emissive displays, touch surfaces, PV, sensors and more - from materials to manufacturing. Most importantly, the needs and applications are examined in depth with a wide-range of end-users from Abbot to Ravensburger presenting on their experiences.
Attend the forthcoming events:
TCF Live! Berlin, Germany, April 17-18 2013
Printed Electronics Europe, Berlin, Germany, April 17-18 2013 .
Graphene LIVE! April 17-18 Berlin, Germany
Top image: Wikiland
PrintForwardTweetLikePinredditShare
Previous
Next