Apr 20, 2010 Raghu Das
Approximately 900 people attended the IDTechEx Printed Electronics Europe conference in Dresden last week, the biggest event on the topic in Europe and a focal point for the industry and those interested in its growth.
At the end of the first day - which included keynote presentations from companies such as NOKIA, P&G, Sharp, DARPA and Total - this year's IDTechEx Printed Electronics Awards were presented during the conference Gala Dinner. 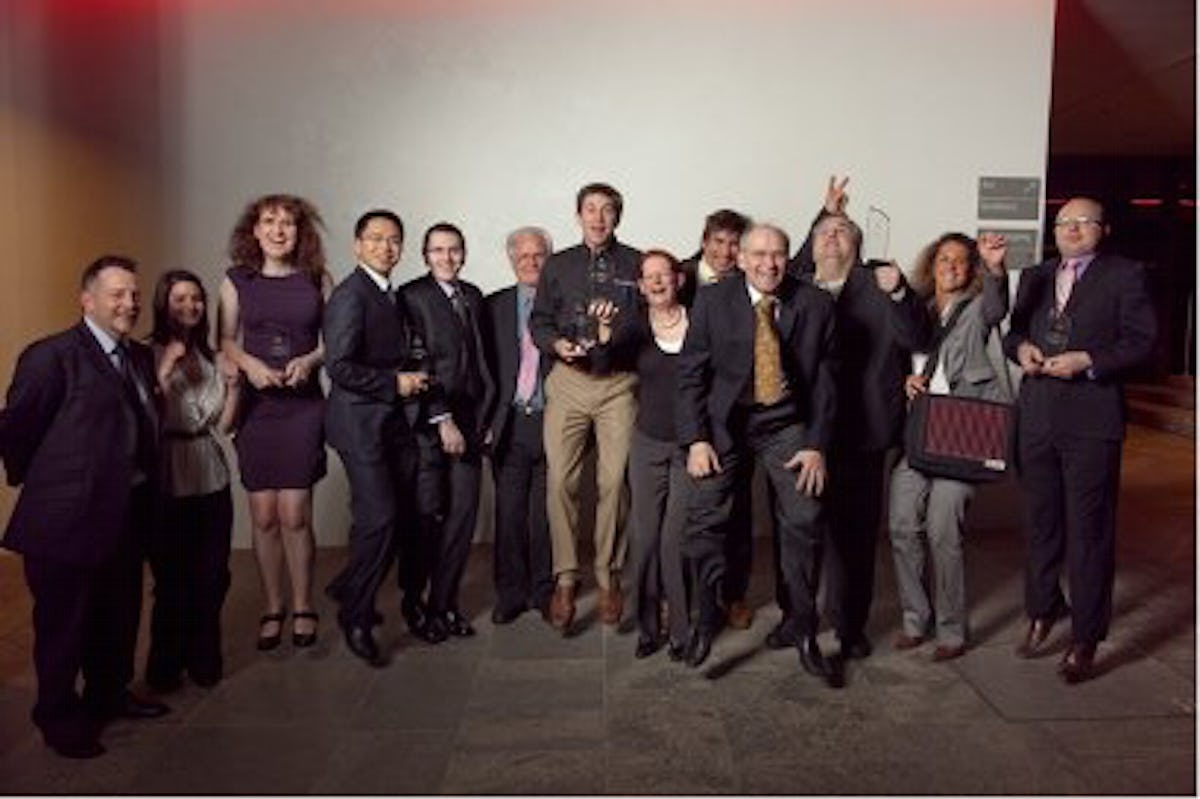 The awards were judged by Professor Iain McCulloch, Imperial College, The University of London, UK, and Professor Elvira Fortunato, Universidade Nova de Lisboa, Portugal. There were more than 35 award applications in total.

Mr Dirk Hilbert, Deputy Mayor of Dresden, presented the award which was sponsored by the City of Dresden. This year's winner was Professor Edgar Dörsam, Director of the Institut für Druckmaschinen und Druckverfahren of Technische Universitaet Darmstadt. His previous experience working with MAN Roland facilitated his efforts to achieve the necessary interaction between the printing and the electronics industries, a collaboration that's necessary in order to grow the printed electronics market. 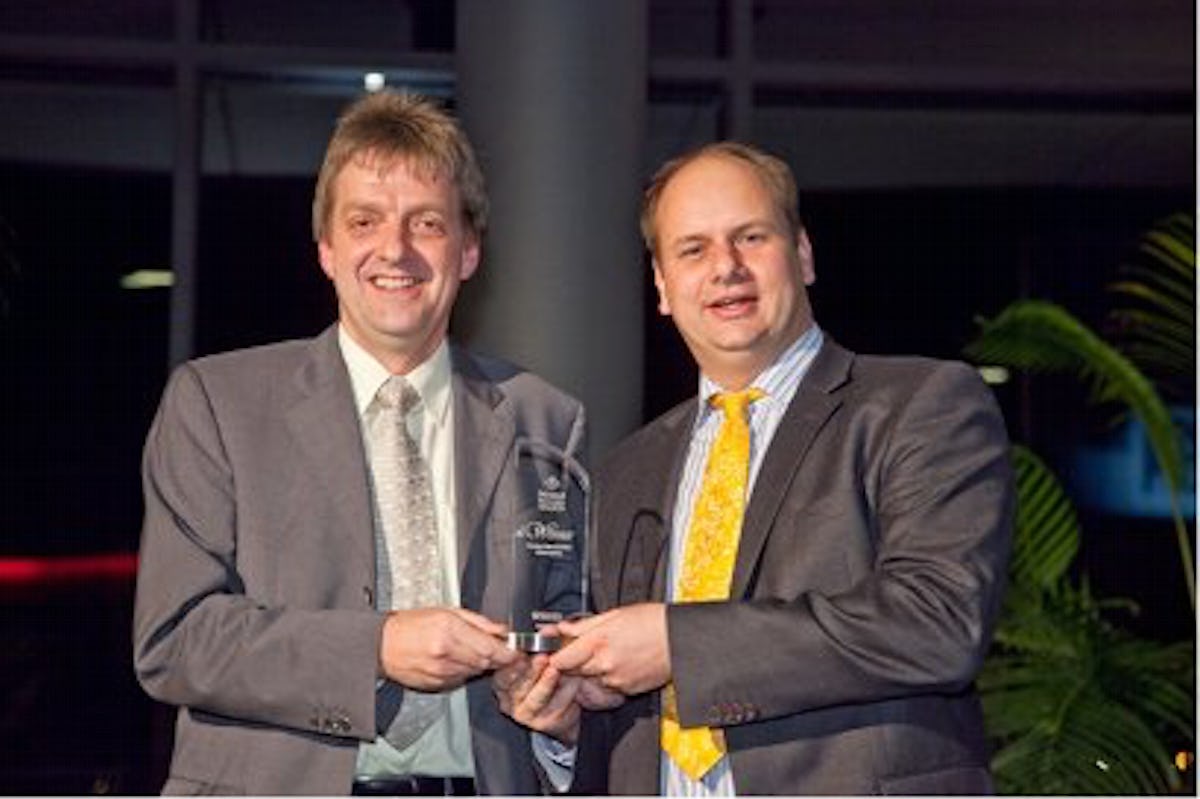 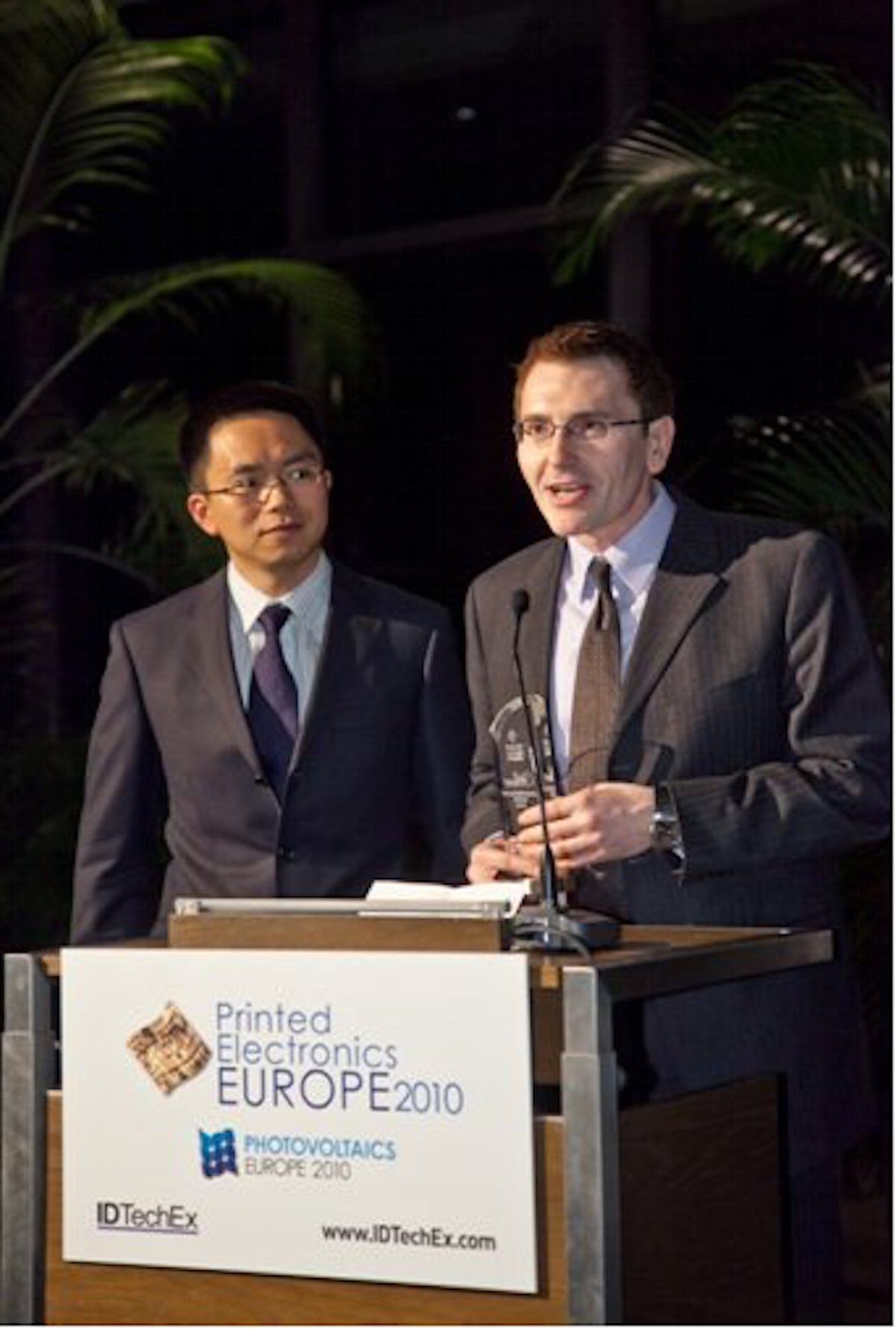 Due to the amount of research and development work going into materials development, there were two materials awards this year: one for organics and one for inorganics. The organics award went to Polyera for the development of printable, air-stable, polymeric and molecular n-type organic semiconductors for OTFTs. This enables CMOS architectures to be used. 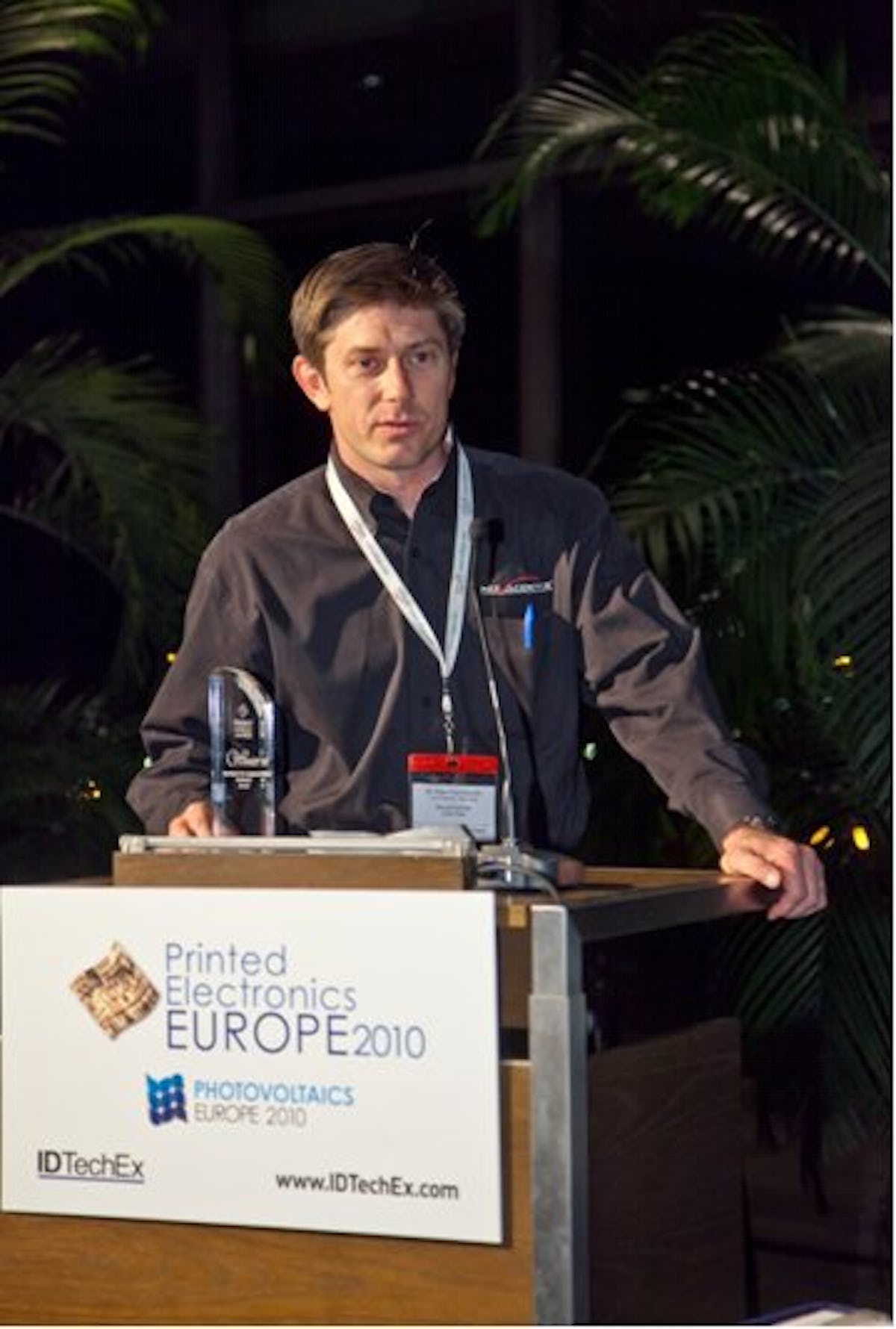 The Inorganic Materials Development award was given to Novacentrix for their work enabling inexpensive printed copper conductors through copper oxide ink reduction. The process utilizes their PulseForge sintering system which reduces the copper oxide ink to copper in room temperature and atmosphere conditions. 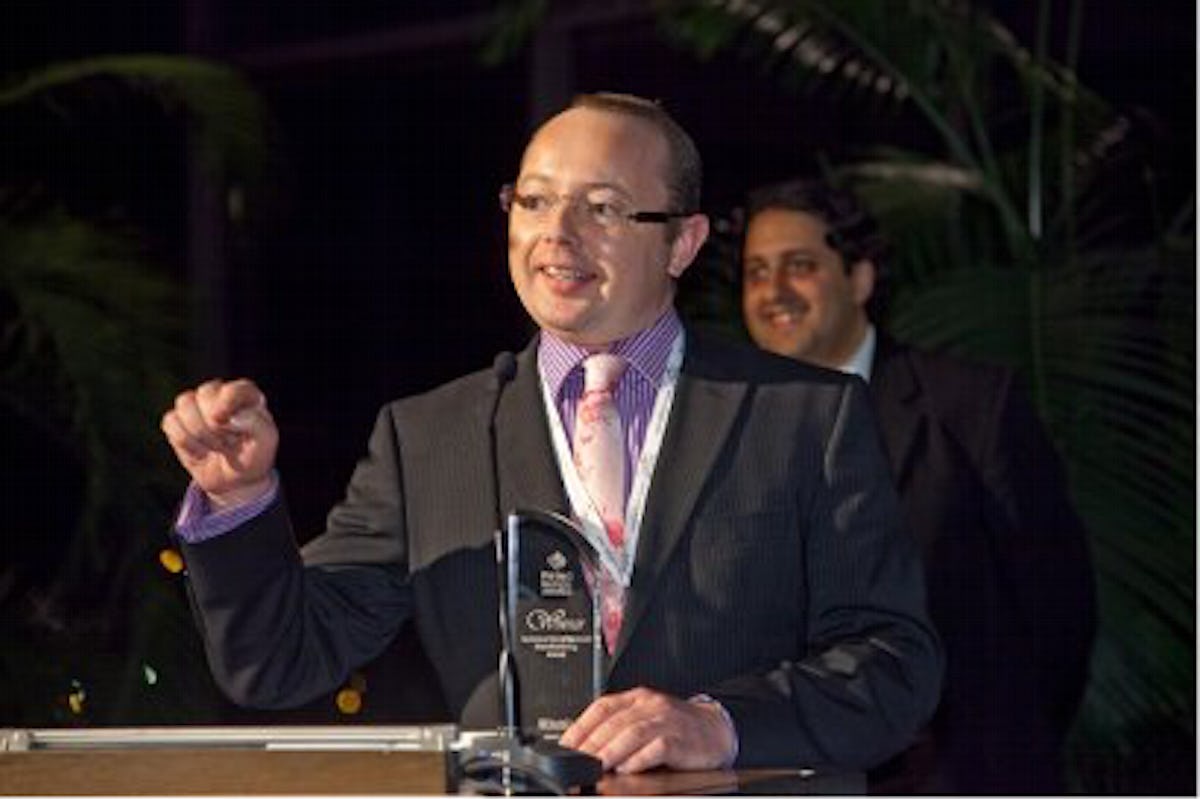 The manufacturing award was given to E2M, a company that has developed a UV curing system for changing the physical state of a (UV-curable fluid) liquid to a solid. The product offers superior levels of system maintenance and fast throughput. 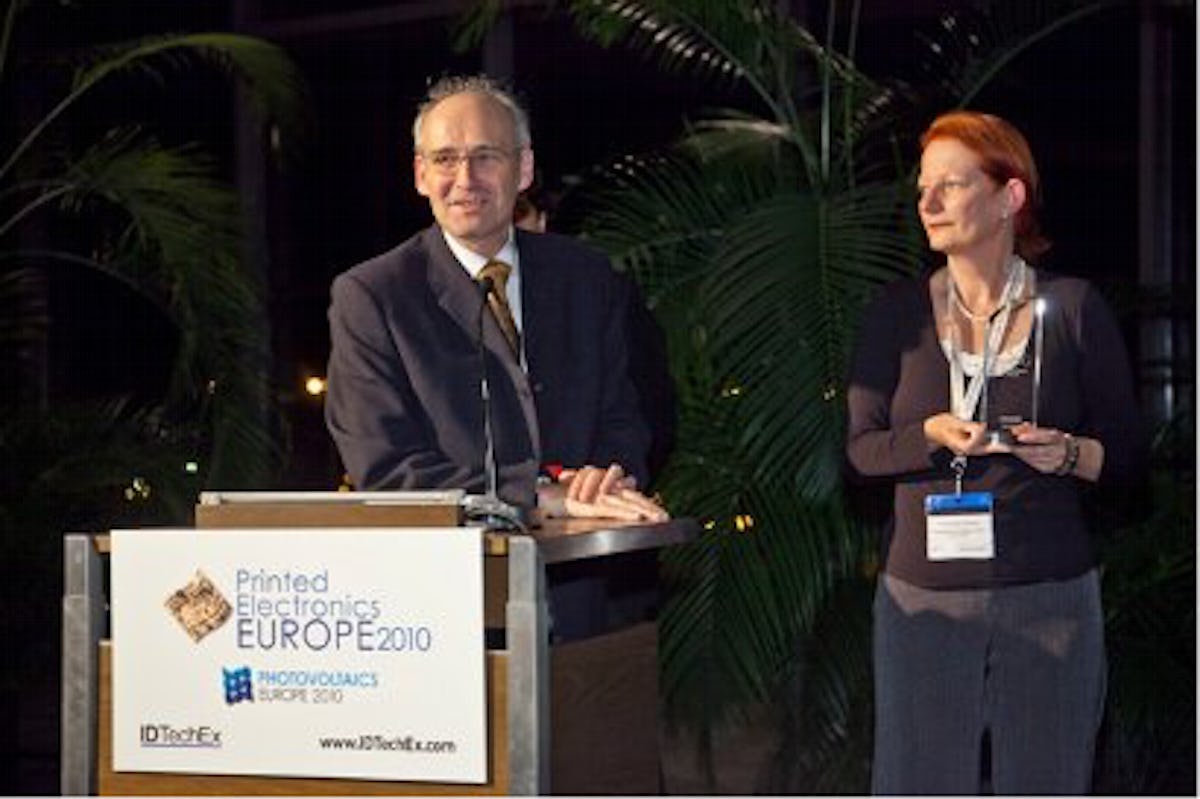 The Academic award was given to Professor David Britton and Professor Margit Härting of the University of Cape Town, South Africa for their work on printable silicon. They have demonstrated semiconducting functionality from silicon nanoparticle based inks deposited under ambient conditions without further (usually high temperature) processing. 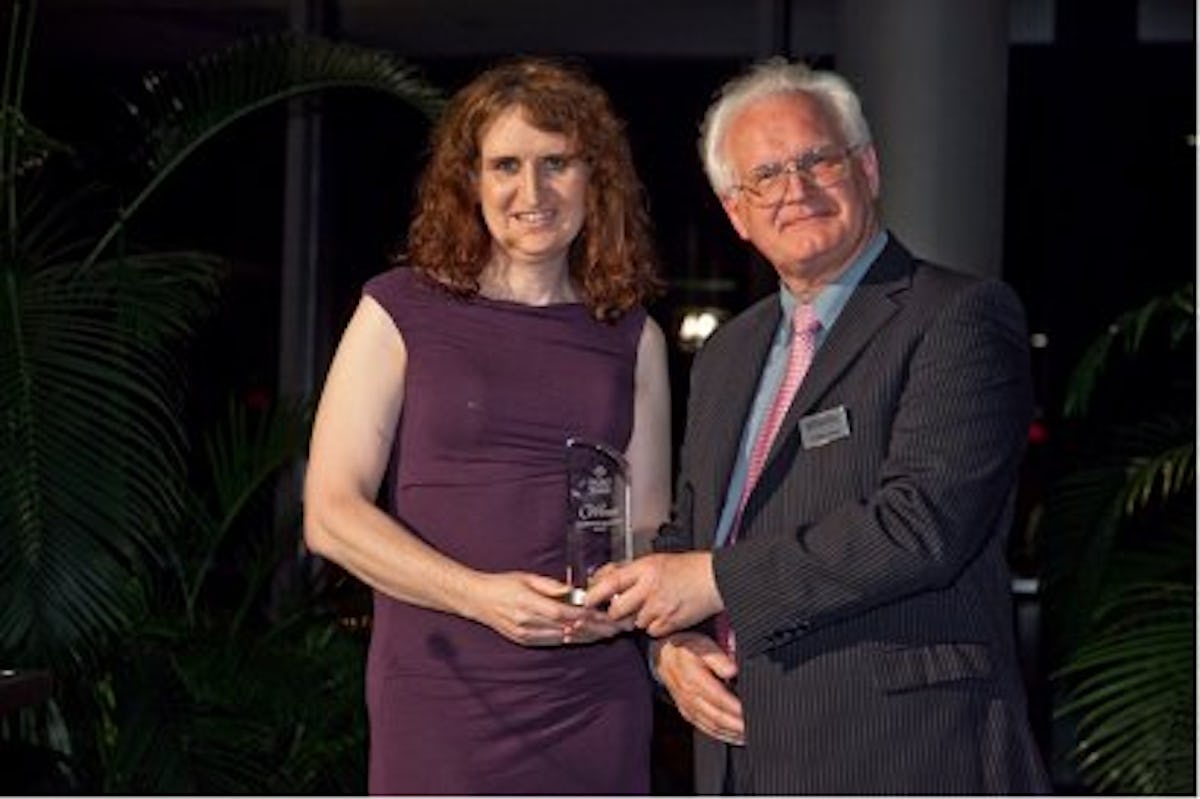 This award recognizes efforts in creating a new product (without having necessarily been commercialized yet). The winner was Novalia, for creating a self contained printed electronics control unit. By attaching this unit the printed material is empowered with interactivity. The unit contains a power source and has a microcontroller with embedded drive electronics enabling 'touch-sensitivity' for user input and sound/display for output. 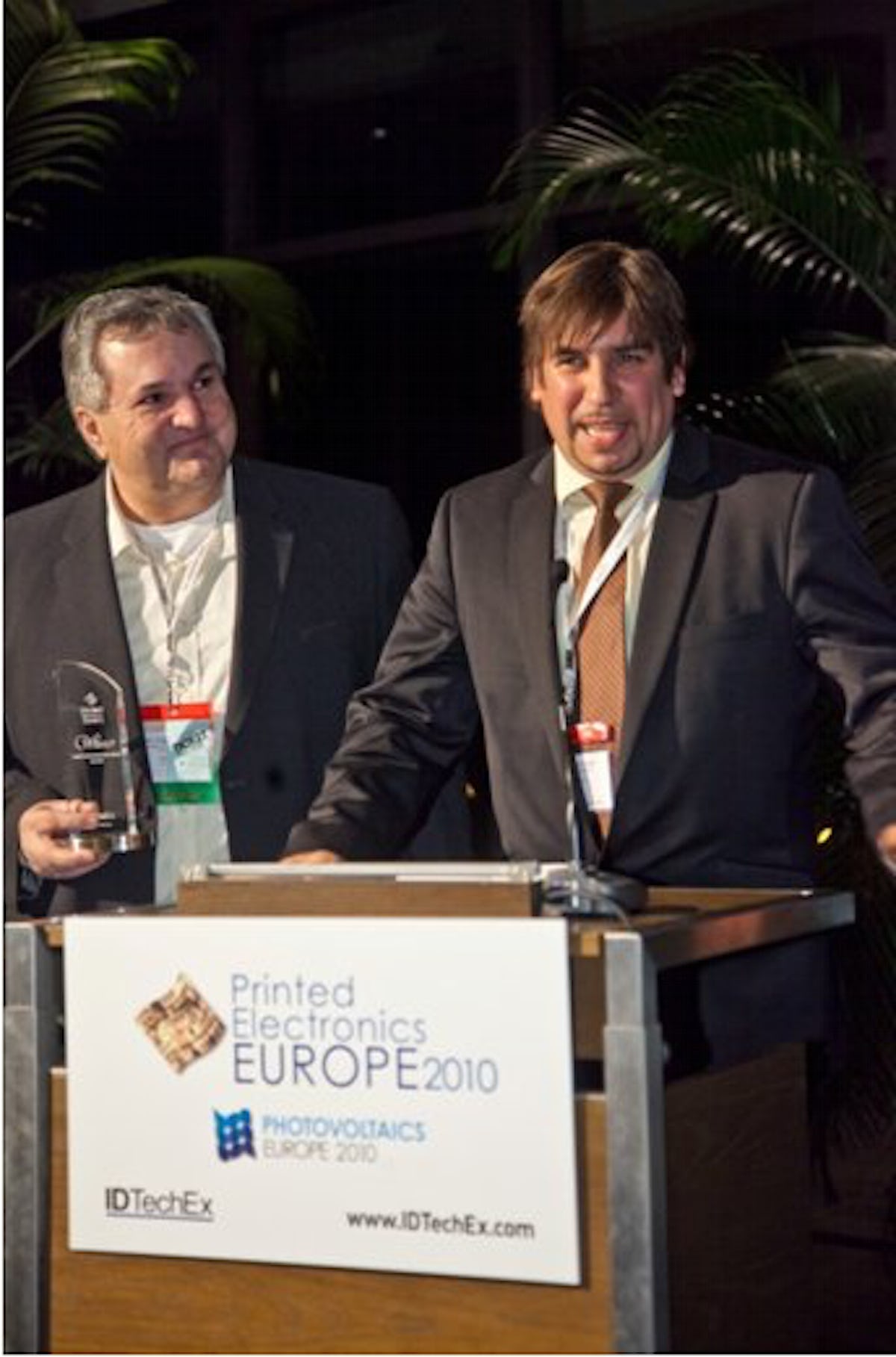 The commercialization award was finally given to the company Neuber's and their successful solar bags, which incorporate a 2.2 Watt organic solar cell from Konarka. The OPV cell charges a lithium-ion battery integrated in the bag which can be used to charge laptops, cell phones and other devices. This is the first commercial product for OPV cells.
IDTechEx would like to thank all companies that submitted their entries for the above awards, without which they would have never been as successful and by now, a regular feature in the Printed Electronics series of events. We encourage companies to submit applications for future events, to gain due recognition for their work.
Next year the IDTechEx Printed Electronics Europe event will be held in Düsseldorf, Germany, on 5-6 April 2011. The event will feature exciting new company visits to local organizations involved in the topic and will continue to grow and remain the largest European event on the topic.
Join our Asia and US events in 2010 - see www.IDTechEx.com/events for more details.
Read other articles about this event
PrintForwardTweetLikePinredditShare
Previous
Next