Aug 31, 2011 Raghu Das
IDTechEx has tracked the printed electronics market since 2002. We have conducted extensive research programs, run our own events internationally and attended most other relevant events. Being impartial, we state the good and the bad. So what have we learnt?
IDTechEx do not believe that the development of this industry is much different from that of other new emerging technologies, such as conventional RFID, "nanotechnology" and energy harvesters. The fundamental technology breakthrough comes with new materials, and in turn they are used to make components. Innovation is accelerating, an indicator of this is the increasing academic and industrial work on the topic. However, like other industries in this early phase, commercial revenue is lagging.
Commercially, there are few successes, the most prominent being E ink, a company that developed e-paper now in use in e-readers which is a market that has tripled every year since 2006. However, most printed electronics activities this year, of more than 3000 organisations in the field, rarely have more than a million dollars in revenue each.
The $2.2 Billion market today for printed and potentially printed electronics
IDTechEx research in the report "Printed Electronics Forecasts, Players & Opportunities 2011-2021" finds that if we include potentially printed devices (such as OLEDs which are mostly not printed today but are moving in that direction), the market this year is $2.2 Billion. This is made of the components as shown below. 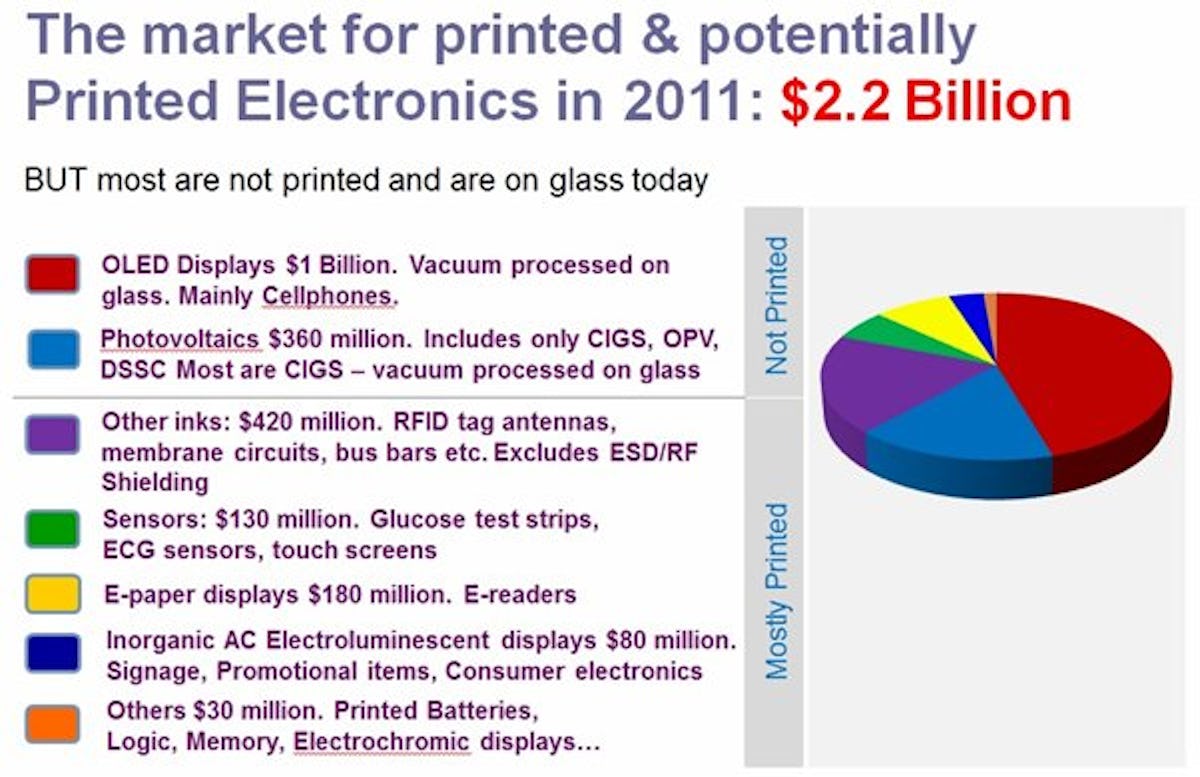 Source: IDTechEx report Printed, Organic & Flexible Electronics Forecasts, Players & Opportunities 2011-2021
IDTechEx forecast the adoption of new technologies using input from adopters, suppliers, assessing technology roadmaps, pricing and much more. We use models such as the bass diffusion model where relevant to predict the forward outlook. Of the total market in 2011, 38% of the components shown will be printed. Initially photovoltaics, OLED and e-paper displays grow rapidly, followed by thin film transistor circuits, sensors and batteries. By 2021 the market will be worth $44.25 Billion, with 56% printed and 43% on flexible substrates.

In surveys IDTechEx has conducted, venture capitalists have mixed views. Certainly the community is actively looking and has invested in printed electronics organizations over the years, but some expect to see more success in a ten year old industry than has been achieved. Most exits have not made the investors concerned much money, or any.
The traditional venture capitalist outlook is (though not always) relatively short term - a 40% return or so in three to four years. So far, there are few examples of investors achieving this, although that may now change as companies tinker on the brink of commercialisation.
Strategic corporate investment takes a longer term view; it is favoured from material companies (BASF, Solvay, Sumitomo, Bayer Materials Sciences) who develop internally and invest externally, as well as from equipment providers (such as Applied Materials) and large electronics and packaging companies (Samsung, LG, Intel, Kurz, Tyco Retail, Toppan Forms). In addition, governments (particularly in Germany) see printed electronics as a key enabling technology and are investing substantially.
Still, all stakeholders seek a return sooner rather than later so what is holding things up? Many are pursuing the highest performance devices, tackling directly replacing conventional electronics. OLED displays vs LCDs is one example, OLED lighting vs Led lighting and traditional lighting is another. The timescale is necessarily long as a result and investment not for the faint-hearted. However, IDTechEx believes there is enormous opportunity now for the current capability of printed electronics devices, but there is not enough effort to make products that are needed, mainly because the imaginative and creative skills to create new product are not generally within the industry.

There is huge demand

There is undoubtedly huge demand for printed electronics. IDTechEx are aware of many consumer goods, healthcare, consumer electronics, textile, vehicle and other organisations that have internal teams looking at this topic. Most are very secretive as they seek competitive advantage and even IP.
The new form factors - flexibility, thinness, ease of integration are highly compelling. But the printed electronics industry is setting too high a barrier for early adopters. It is an industry that supplies components and not products, that expects to go from zero to immediately colossal volumes (or won't bother quoting), that are concerned more about IP than doing business. Perhaps the key issue is the lack of creative product designers with the imagination to create new fabulous samples and prototypes that makes printed electronics tangible for those seeking something new.
Like many other new technologies - those that have been successful have realised, whether they like it or not, they probably have to move from a horizontal component play to making a complete product. Power ID with their skin patch for Estee Lauder, Kovio with RFID tags and T-ink being examples. This is similar to other early industries such as conventional RFID, which saw many at the start of the value chain move to the right. Yes, there was shakeout but also now big winners. The good news for many is that increasingly the printed electronics industry is tackling the problem. More can still be done.

IDTechEx see some change in the last eighteen months where companies who aim one day for the fully printed device take stock of where they are and address more short term demands, which may turn out to remodel and be more successful than their original business plan. Printing fine conductive traces to replace ITO, for example, or using inkjet in industry to print colour filters, or solar bus bar lines where contact methods could otherwise result in the failure of the ever thinning silicon solar layer are examples of recent traction.

Putting it all together

It is our continual aim that IDTechEx events bring together all the pieces for you. At the Printed Electronics USA 2011 CA, USA on Nov 30-Dec 1, end user speakers include Reckitt Benckiser, MARS, Procter & Gamble, MWV, Boeing, De La Rue, the US Army, Stora Enso and many others.
They will discuss their needs and experiences. We are structuring the event to appeal as much to end users and integrators as to suppliers, this is not another industry meet industry show. To that end, the event features "Demonstration Street", the one place in the World where you can see more types of printed electronics samples than any other, in addition to attendees receiving free samples of printed electronics.
Printed Electronics will be hugely successful, the question is if the industry can learn from lessons of the past and address the issues quickly. We hope this event will do its part and we welcome your suggestions and feedback.
For more information and to register, see: www.IDTechEx.com/peUSA.

If you seek to have customised samples made to your specification, IDTechEx can assist you by educating you on what is possible and linking you to relevant suppliers globally. Contact Raghu Das r.das@IDTechEx.com for details.
For more attend: Printed Electronics USA 2011.
PrintForwardTweetLikePinredditShare
Previous
Next