Nov 30, 2006 Raghu Das
Most of the RFID business is booming. Andrew Price RFID Manager at IATA, the airline trade association, enthuses, "In the next few years the air industry will be tagging an ever higher proportion of its two billion bags yearly and it will use RFID in other new applications as well." This is a global phenomenon, not least in government applications. Dr Jimmy Li, Deputy Director of the Initiative Office for Government RFID Applications at the Ministry of Economic Affairs Taiwan and Senior Advisor of the Institute for Information Industry in Taiwan says, "Government applications of RFID are now growing rapidly. We started five RFID projects in the government area this year and there are more to come next year."
Steve Georgevitch, Total Asset Visibility Program Manager of Boeing Integrated Defense Systems says, "The aerospace and defense industries are on a rapid RFID adoption path with substantial benefits anticipated in the next several years".
Martin Capper, President, Mark IV IVHS Division says, "Mark IV sees RFID as an explosive market particularly in the Transportation segment with the evolution from the existing electronic payment systems to new applications delivering safety and mobility for both individuals and commercial traffic. The emergence of DSRC at 5.9GHz will create the next paradigm shift in surface transportation."
There are also new markets opening up beyond transport. Dr Chang-Hun Lee of the National Information Society Agency, Korea says, "Ubiquitous Sensor Networks will be a huge RFID market in a few years."
RFID tagging of livestock is driven by ever wider legislation. For example, the European Community and New Zealand join the party in 2008-2010, creating a market for tagging sheep, goats, pigs and cows, the total demand for these two regions being over 150 million tags yearly at about $2 each in 2010 from almost none today. Add a big demand for systems to that figure. The largest bookseller in the Netherlands BGN is ordering several million tags yearly for its new scheme and its payback is so compelling that others will rapidly follow.
When it comes to the biggest RFID market - contactless smart cards - Don Davis, Editor of Card Technology says, "Big players are making major bets on contactless, and forcing competitors to catch up. They are issuing large numbers of contactless cards and fobs and, in Japan, adding contactless functionality to millions of mobile phones, giving many consumers the chance to pay with a wave."
Contactless cards are a huge success and contactless ticket sales are also taking off exponentially. The China National ID card and system is the biggest rollout but an even larger budget of at least $15 billion is planned for the UK National ID card. Then there is continued growth in secure access applications and the start of the process of converting over three billion financial cards from Visa, MasterCard, American Express and JCB to RFID. Eurosmart sees sales of these RFID financial cards doubling to 20 million in 2007. In the US alone, 150,000 readers have just been installed for these financial cards but that is only the beginning. RFID cards and tickets and RFID enabled mobile phones (Near Field Communication) increasingly provide payments, ticketing, and secure access. All three devices are seeing rapid growth.
The China National ID scheme will peak at a huge 300 million US $2.45 cards delivered in 2007. Card readers valued at $1.2 billion are being ordered to go with them. The global market for RFID cards and systems will pass $3 billion in 2008. The figure below shows the market for RFID cards, which is fully analysed, together with tickets and RFID phones, in the new IDTechEx report Contactless Smart Cards and Near Field Communication 2007-2017.
Value of global market for RFID cards 2007-2010 in millions of US dollars excluding the China ID card 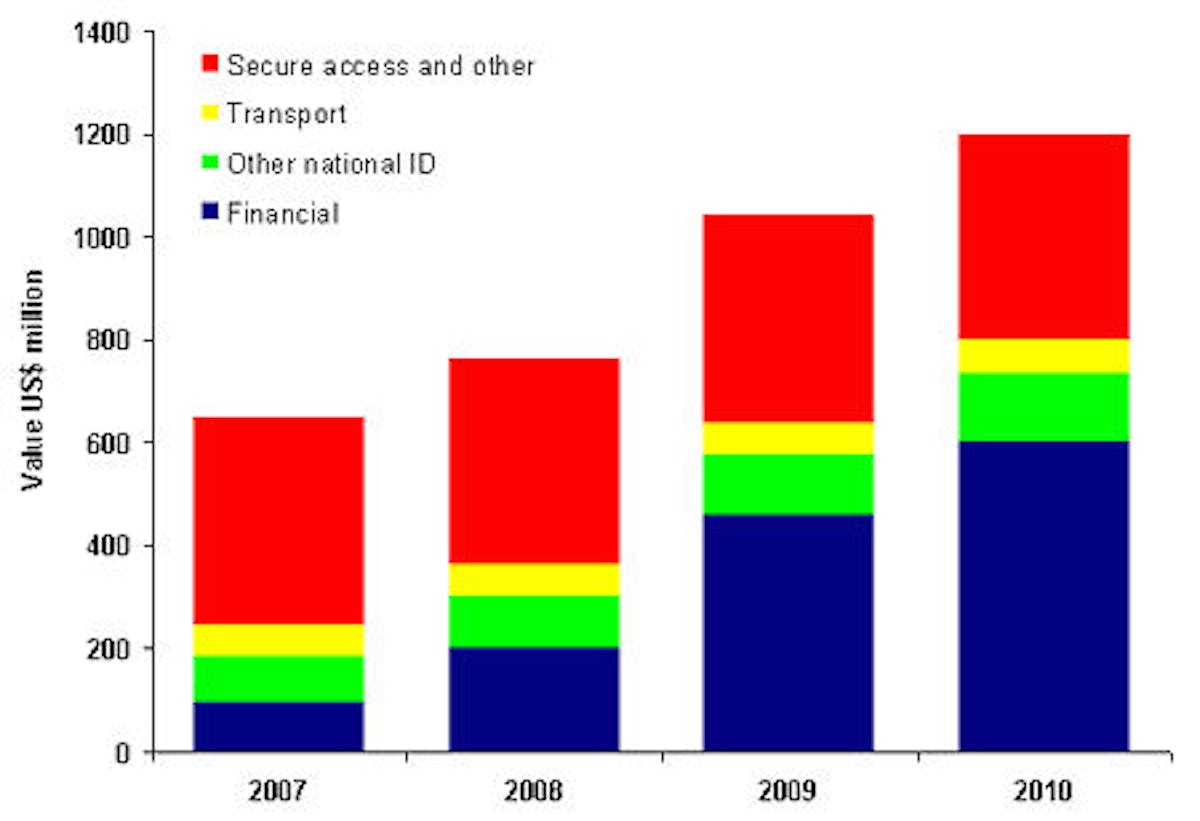 Source: IDTechEx report Contactless Smart Cards and Near Field Communication 2007-2017
IDTechEx forecasts that sales of RFID tickets will rocket from 100 million in 2007 to 450 million in 2010. Others are even more bullish in their forecasts. Certainly, the national railway system in China uses three billion tickets yearly, so its recent order for hundreds of millions of RFID tickets is only a beginning.
All the experts quoted in this article will present at the sixth annual RFID Smart Labels USA and Active RFID & RTLS conference in Boston, February 21-22 2007 www.smartlabelsusa.com

. This major conference will be attended by many companies that intend to place large orders for RFID.
PrintForwardTweetLikePinredditShare
Previous
Next