Juni 07, 2017 Dr Khasha Ghaffarzadeh
Stretchable electronics is a diverse umbrella term including numerous technologies, each targeting a different market, each having different technology readiness level, and each facing a different market prospect. In the IDTechEx Research report, Stretchable and Conformal Electronics 2017-2027 (www.IDTechEx.com/stretchable), we offer a comprehensive assessment of the emerging industry.
In this article we highlight one stretchable electronics technology with the potential to become a near-term success story: interconnects. For more information, please refer to Stretchable and Conformal Electronics 2017-2027.

Connectors are a simple essential component in all electronic system. Their simplicity means that they can be made stretchable. This is in contrast to complex multi-layer interfacial devices like transistors whose stretchable versions are commercially years away despite numerous laboratory proof-of-concept results or prototypes. They are also essential. Indeed, they can even be the only stretchable component in stretchable systems made using the rigid island-stretchable interconnect approach.
A variety of approaches have been developed to produce stretchable interconnects. Some are shown in the figure below. In one approach, PCBs are made stretchable. Here, ICs and other rigid electronic components are mounded a standard PCB 'island'. These islands are then interconnected using a thinned meandering PBC lines, introducing stretchability. This technique is not yet easy to scale with good yields, but is also serving high-value low-volume applications.
In another approach, cables are arranged in a specific way to impart stretchability. One example is shown below. Here, stretching does not change the total length of the wire and thus causes no resistance change. Note that this approach often require introducing a separate distinct cable onto the e-textile systems, and whilst robust it is not structurally embedded. Note that conductive cables are themselves not intrinsically stretchable. Many approaches are however being developed, most at the early-stage prototyping level, to create truly stretchable conductive fibres/yarns. An example is shown here below. Here, carbon nanotubes were employed. 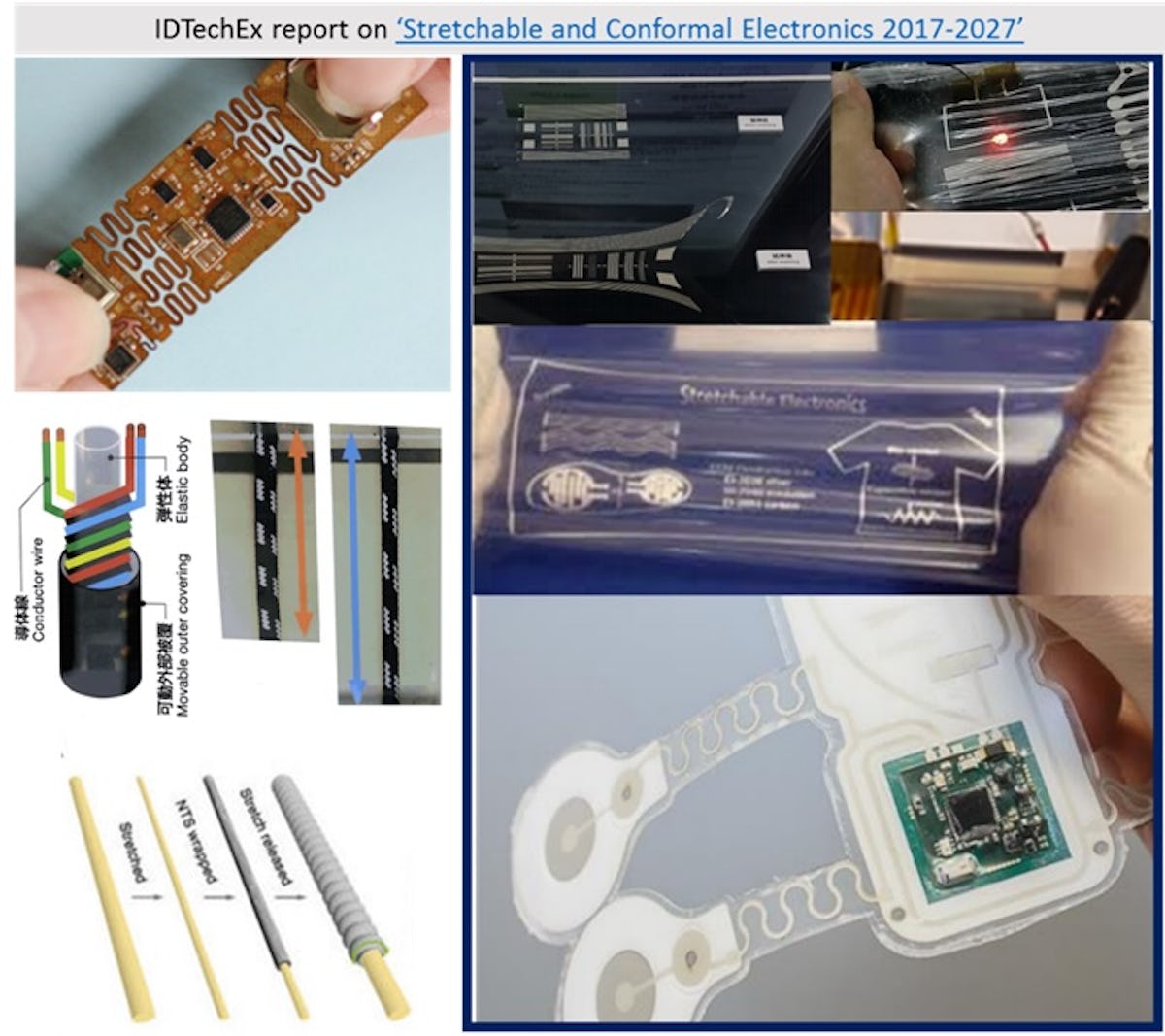 Yet another approach is based on stretchable conductive inks. This approach enables the use of post-production processes steps such as transfer or screen printing to introduce the stretchable interconnect onto the textile. It therefore requires no alternation to standard textile production lines. It can also be used in stretchable circuits, particularly acting as stretchable interconnects on long stretchable substrates for use in, for example, medical electronics.
This approach is trendy all around the world: whilst only three years ago only two or three companies offered such inks, but now most players have either launched a product or demonstrated capability. The application pipeline is also gathering momentum with many products in late-stage prototyping phases and some even in the early commercial phase sales. Some examples are demonstrated below. For more information on the companies active in this field and emerging products/prototypes please refer to Stretchable and Conformal Electronics 2017-2027. 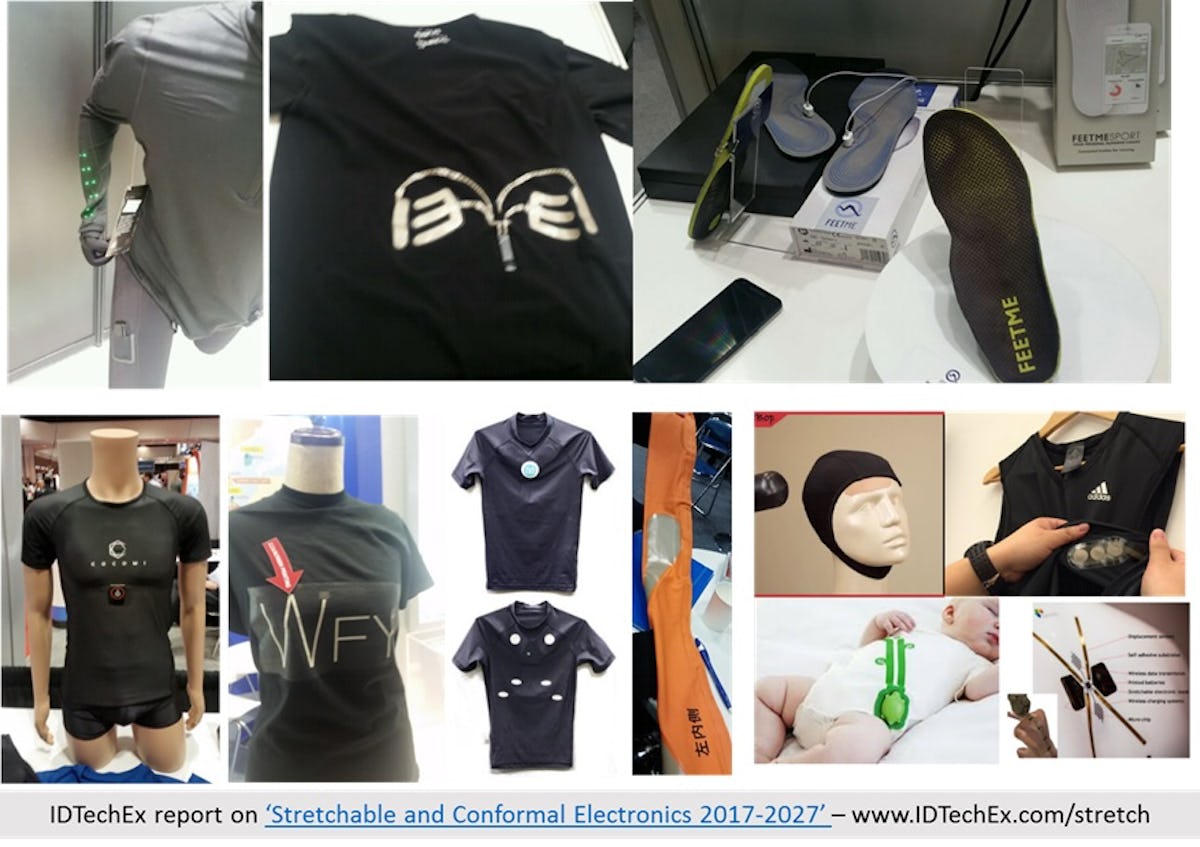 Examples of e-textile products or prototypes employing stretchable conductive inks. Sources: Holst Centre/DuPont (Wearable Expo Japan 2017), FEETME/DuPont (Wearable Expo Japan), Bebop impact sensors, Mimo breathing sensor, stretch sensor by Bainisha, activity sensors by Clothing +, Toyobo (Japan 2017), Jujo Chemical (FineTech 2016), Maxim Integrated, Toyobo (Japan 2017). The conference name/location indicates where I took the photograph.
Stretchable conductive inks are still a young technology. Indeed, performance progress is highly visible when tracking the last few generations of inks launched by any given company in quick succession. Stretchable inks today can tolerate higher elongation levels and suffer less resistance change. These improvements have been achieved thanks to changes in resins, binders and even at times filler size distribution. See Stretchable and Conformal Electronics 2017-2027 for details on the performance levels of conductive inks under different conditions and by different suppliers.
There is still a long way to go though. Currently, the printed lines are encapsulated using a material such as TPU. This is not an elegant solution and the encapsulant is not ideal (e.g., issues with comfort, breathability, etc). Direct on-textile printing remains a long-term challenge as numerous textile substrates exist each with different properties and almost none offering a good printing surface.
Critically, the market requirements are yet fully known, and may even remain diverse and fragmented. For example, today suppliers receive enquiries for conductivity and stretchability levels at opposite ends of the performance spectrum. This is an opportunity for competent suppliers to offer customized solutions before slightly more standard product groups emerge. In fact, the ability to address varying cost-performance needs represents an opportunity for the entire category of ink-based stretchable interconnects compared to its rivals.

In addition to wearable and medical application, in-mold electronics (IME) applications are also emerging as a market for stretchable conductive inks. IME has previously got off to a false start, but, as stated in Stretchable and Conformal Electronics 2017-2027, we believe that its time has come.
In IME, functional and graphical inks are printed on a flat sheet then formed into a 3D shape. Consequently, the inks will have to withstand at one-off elongation even (30-50% original length). Whilst similar to the previously-discussed stretchable inks, IME inks have different requirements: (a) they experience a one-off elongation, (b) they need to adhere well to the substrates used (e.g., polycarbonate), and (c) they must be compatible with the stack of other materials used in IME, e.g. layers graphical, insulating, transparent conducting, and other inks.
Here too, the industry has responded. Today, most suppliers have launched products or demonstrated capability. Today, many are engaged with major end users in either the automotive or while appliance industries. The trend is reflected in the increasing number of porotypes launched on the market (figure below shows some examples). In fact, in our ten-year market forecasts in Stretchable and Conformal Electronics 2017-2027, we expect success stories in the next two years.
Interestingly, the materials toolkit for this technology is expanding beyond conductive inks. For example, several stretchable transparent conductive film technologies have been developed, and some are close to product launches. This technology enable bringing capacitive touch technology to 3D-shaped surface in high-volume application. We will not discuss this development further in this article, but more detailed information on the technologies, applications and players can be found in Stretchable and Conformal Electronics 2017-2027.