Supercapacitors market to achieve 30% CAGR over the next decade

Supercapacitors market to achieve 30% CAGR over the next decade

Mai 02, 2014 Franco Gonzalez
In the recently updated report Electrochemical Double Layer Capacitors: Supercapacitors 2014-2024 IDTechEx confirms its outlook for a 30% CAGR in the next 10 years, based on 2013 industry results. The supercapacitor market will reach a value of $6 billion in 2024.
Technology assessments and future developments
Supercapacitors have been defined as energy storage devices that are positioned between standard capacitors and batteries, in relation to their energy and power density capabilities. However, new device configurations that combine electrodes of batteries and supercapacitors, the so-called 'hybrid capacitors' or 'supercabatteries', define a new technology segment in which the best of both batteries and supercapacitors are combined.
This report describes each of these technologies and their relative advantages and disadvantages. It presents a development roadmap including the expected improvements in performance and cost of different technology configurations and their likely market adoption in the different application segments.
Unique performance benchmark
A new feature of this updated report is a performance benchmark of the energy and power density of the supercapacitors that are commercially available or under development from the main supercapacitor companies in the industry. Currently different companies report different performance results based on different testing methods. This benchmark has been based on a standardised testing procedure of supercapacitor performance developed by UC Davis and that IDTechEx has supported its diffusion through our Supercapacitor conferences.
New materials
Indeed there is still plenty of room for material developments in supercapacitors. In this report progress in new environmentally friendlier and safer materials for supercapacitors are reported. Discover why this trend is gaining momentum and who are the organisations pushing these changes. This report includes some of the latest performance achievements in relation to the implementation of graphene in supercapacitors.
Market drivers 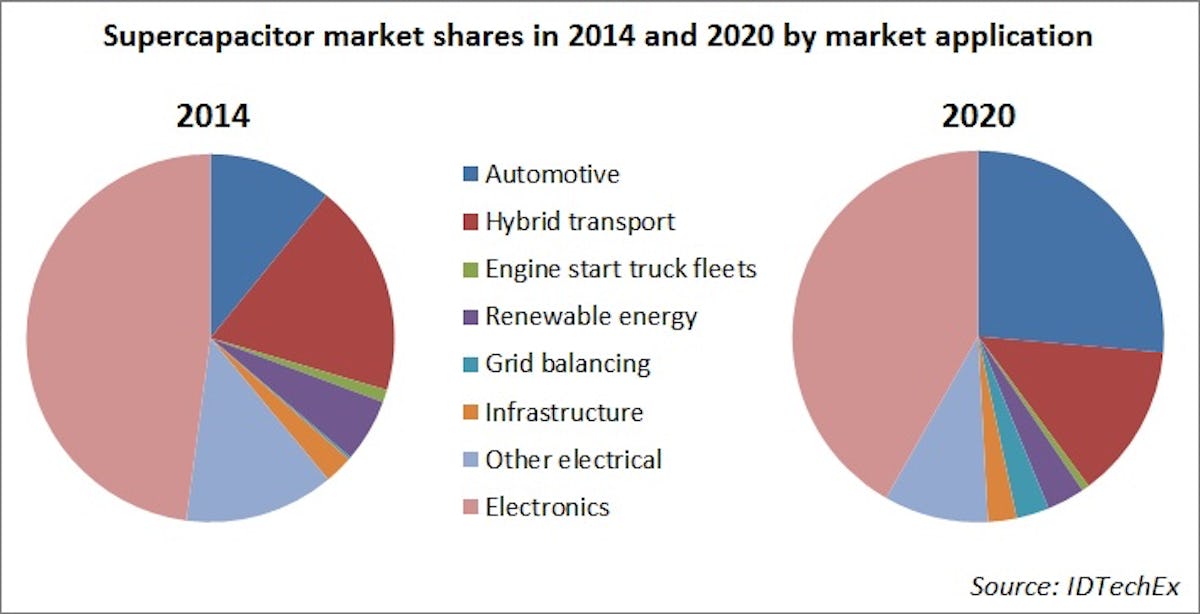 Supercapacitors offer different value propositions in relation to different applications segments. This report analyses the relative advantages and disadvantages of supercapacitors in relation to batteries in different applications segments and a comprehensive review of the existing and potential of these applications.
Some of the market drivers behind the adoption of supercapacitors in the transport sector are: fuel efficiency, greenhouse gas reductions, improved braking energy recovery, lighter energy storage and high power, fast charging and extended cycle life operation.
Indeed, in the larger applications segments of transportation such as the automotive industry, supercapacitors are mainly being adopted for their potential to reduce fuel consumption (economic reason) and its potential to reduce greenhouse emissions (environmental reason). These benefits are possible based on supercapacitors capability as energy storage solution in stop-start systems and kinetic energy recovery. In Europe the mandatory levels of CO2 emissions reductions to be achieved in 2015 and 2020 for personal cars were established to reach 130 and 95 grams of CO2 per km respectively. This is the main driver in Europe and the reason why companies such as Peugeot have implemented it in popular cars such as the Peugeot 308 on its diesel version.
The superior power capabilities of supercapacitors itself are the main reason for the use of supercapacitors in the most advanced hybrid power trains in racing cars, such as the Toyota TS040.
On the other hand, supercapacitors in the electronics sector need to be smaller and thinner to fit specific space constraints. One main use is to deliver the required energy to back-up information in case of power disruption. Their capabilities favour them for storing energy with very low losses thanks to their very low electric resistance in applications such as energy harvesting, where the very low levels of energy harvested can't be wasted in electrical losses in the energy storage device. Finally, the high power demands and multifunctionality of current and future smartphones and tablet technologies require decoupling energy from power and supercapacitors have a key role to play in this application.
Full analysis and assessment
This report provides a detailed and complete assessment of incumbent and emerging technology solutions. For each technology, IDTechEx assess production method, key cost drives, key figures-of-merit including energy and power density, cost, internal resistance, etc.
IDTechEx has built a detailed, granular and accurate market forecast model. Key market data charts and tables include ten year forecasts in market value for the following applications:
• Automotive
• Electronics
• Hybrid transport
• Truck fleets engine start
• Renewable energy
• Infrastructure
• Grid balancing
• Other electrical applications
In addition it includes:
• Timeline for market adoption by sector and technical achievements driving the growth of the market for supercapacitors and their derivatives 2014-2025 with market value projections for supercapacitors, cost and performance parameter improvements by year.
• Performance benchmark of supercapacitor devices currently commercially available or under development from 10 of the main supercapacitor companies.
Market intelligence
The report profiles 72 supercapacitor manufacturers and provides more in-depth company profiles of the main players in the industry. These include a detailed analysis of the specific technology of each company and their commercial strategies and partnerships.
For more details see the report Electrochemical Double Layer Capacitors: Supercapacitors 2014-2024. Also attend the IDTechEx event Supercapacitors USA in November.
PrintForwardTweetLikePinredditShare
Previous
Next