Okt 02, 2008 Dr Peter Harrop
First there was conventional active RFID where a battery in the tag permits it to initiate a signal, give longer range, manage a sensor or otherwise improve on the capability of a passive RFID tag. The archetypal conventional form of active RFID locks and unlocks your car at a distance of thirty meters or so. It is the key or keyfob called a remote or a car clicker and the device in the car that it recognises it. About two billion dollars has been spent on car clicker systems to date and they are still going strong. Other forms of conventional, first generation active RFID include over one million tags put in a random sample of letters to monitor the performance of postal services. Then there are military versions for supplies and assets with systems orders for up to half a billion dollars in size, so active RFID is far more important that is commonly recognized.
Second generation active RFID is the Real Time Locating System (RTLS) where people or things are located almost continuously from 30-300 meters away, usually by using many emitters. These are in the very rapid takeoff phase after the usual slow start with new technologies. However, overlapping the growth of this second generation active RFID is the third generation where a number of remarkable new systems have just become available. It is the Ubiquitous Sensor Network (USN) sometimes known as the Wireless Sensor Network (WSN) and characterized by the tag doubling as a reader and a so-called mesh network being used with a choice of sensors on each tag. It may be limited to 30 meters range and the tag may be rather like active RFID tags from ten years ago, even using AAA batteries but this capability is still notable because it can make systems scalable, self-healing, affordable and extraordinarily capable. We illustrate these three waves of adoption below. Precise figures are, as yet, uncertain but both RTLS and USN are set to become multibillion dollar markets, such are the needs for these systems. 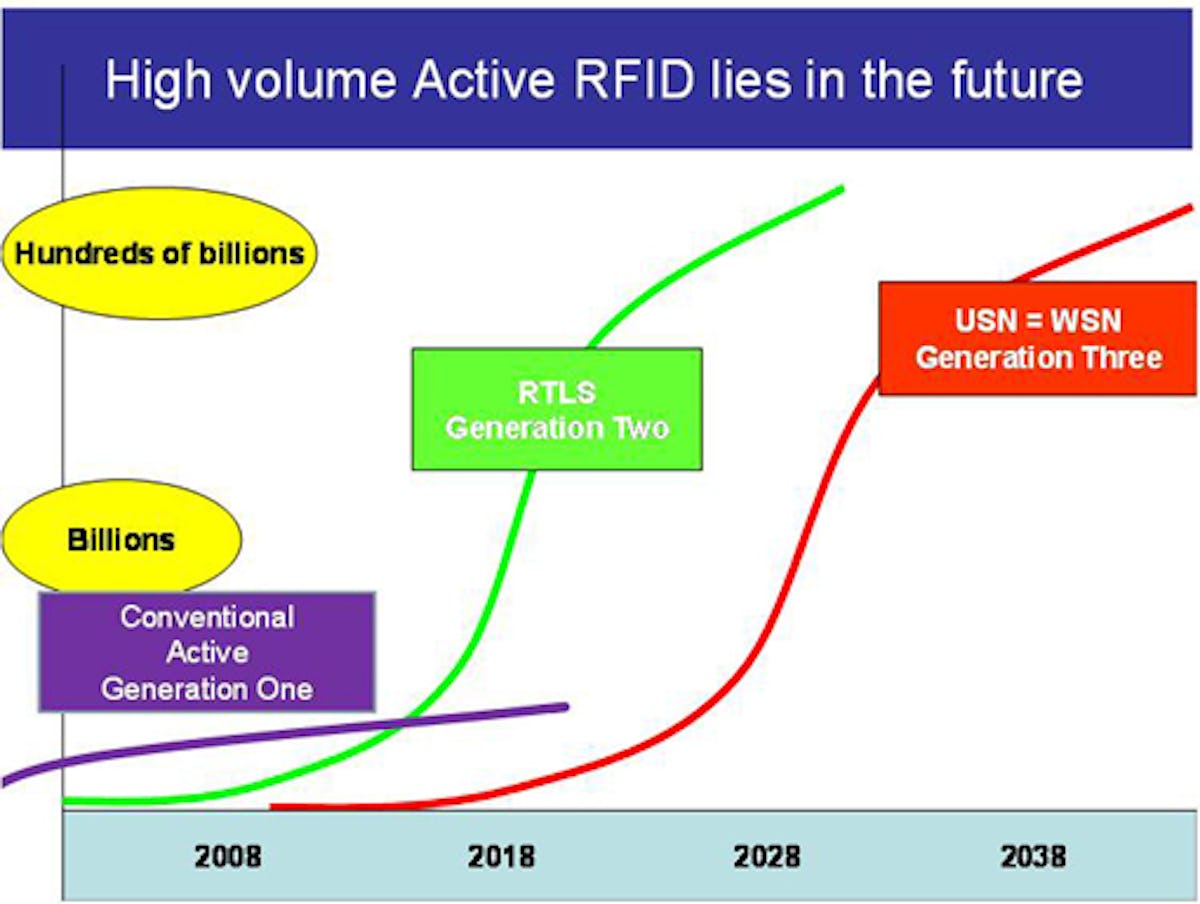 Figure: Arrival of the three generations of active RFID
Source IDTechEx
USN is not yet selling in volume but a number of very exciting working systems have recently become available from companies such as Ambient Systems and Dust Networks, both of which are presenting at the Active RFID, RTLS & Sensor Networks conference in Dallas November 5-6 www.IDTechEx.com/active. Time Domain will talk on "UWB joins Mainstream Ubiquitous Sensor Networks" and both the Holst Research Center of the Netherlands and National Semiconductor will describe their progress with energy harvesting for wireless sensors. Many companies will announce RTLS breakthroughs and applications. The RTLS and USN systems arising from the latest version of the seminal IEEE 802.15.4 specification will be announced. The US Army, IBM, BP, Boeing and various hospitals will present at this remarkable conference. There are optional Masterclasses on the basics, an exhibition and visits to local centers of excellence. Things are on the move. Here are many ways to trade away from any recession.
PrintForwardTweetLikePinredditShare
Previous
Next