Dez 06, 2013 Dr Peter Harrop
The total global gross value market for hybrid and pure electric vehicles will reach US$334 billion within the decade, from a current value of US$69 billion, forecast analysts IDTechEx

. This will primarily consist of large or very heavy duty vehicles, neither of which is primarily bought on up-front price. These military, industrial and commercial vehicles are evenly split between on-road and off-road types, but with a multi-billion dollar marine sector coming up fast. All these vehicles are primarily bought on Total Cost of Ownership TCO and performance.
The top ten manufacturers of hybrid and pure electric vehicles include little known names such as Kion Industries and Jungheinrich due to their pure electric and hybrid forklifts. Toyota has EV sales that dwarf those of its next nine competitors put together because it is number one in electric forklifts and hybrid cars and near the top with its electric buses. It cross fertilises the technologies in these sectors and continues to widen its portfolio, a variant on an electric motorbike being the latest example.
Chairman of IDTechEx, Dr Peter Harrop says, "Companies entering the top ten over the coming decade will be ones with a broad approach and/or backing the next winners such as Yutong in the Chinese e-bus market, since China will buy over 80% of the world's e-buses."
The unique report Electric Vehicle Forecasts, Trends and Opportunities 2014-2024 (www.idtechex.com/ev) provides information essential for those seeking to dominate niches or volume sales of electric vehicles by making either the vehicles themselves or their components, all of which are rapidly changing.
Supercapacitors sometimes replace traction batteries, Silicon carbide and gallium nitride power components will partly replace silicon ones and multiple energy harvesting will become commonplace. Even the vehicles themselves are radically changing. Pure electric buses are becoming more popular than hybrid ones and a large market for small electric aircraft and robot lawnmowers is expected near the end of the coming decade. At this time pure electric cars will take off in sales as range improves up to five fold, due to much more than improvement in batteries, and cost becomes acceptable for mass use.
Meanwhile, a new sector is growing rapidly - the car-like vehicles that are not homologated as cars so they are simpler and much lower in cost. These are the MicroEVs homologated as quadricycles in Europe, and aimed at massive markets such as electrifying the 3.2 million highly polluting three-wheeled taxis in the Philippines.
Ex-factory value of EVs, in 2024, by applicational sector 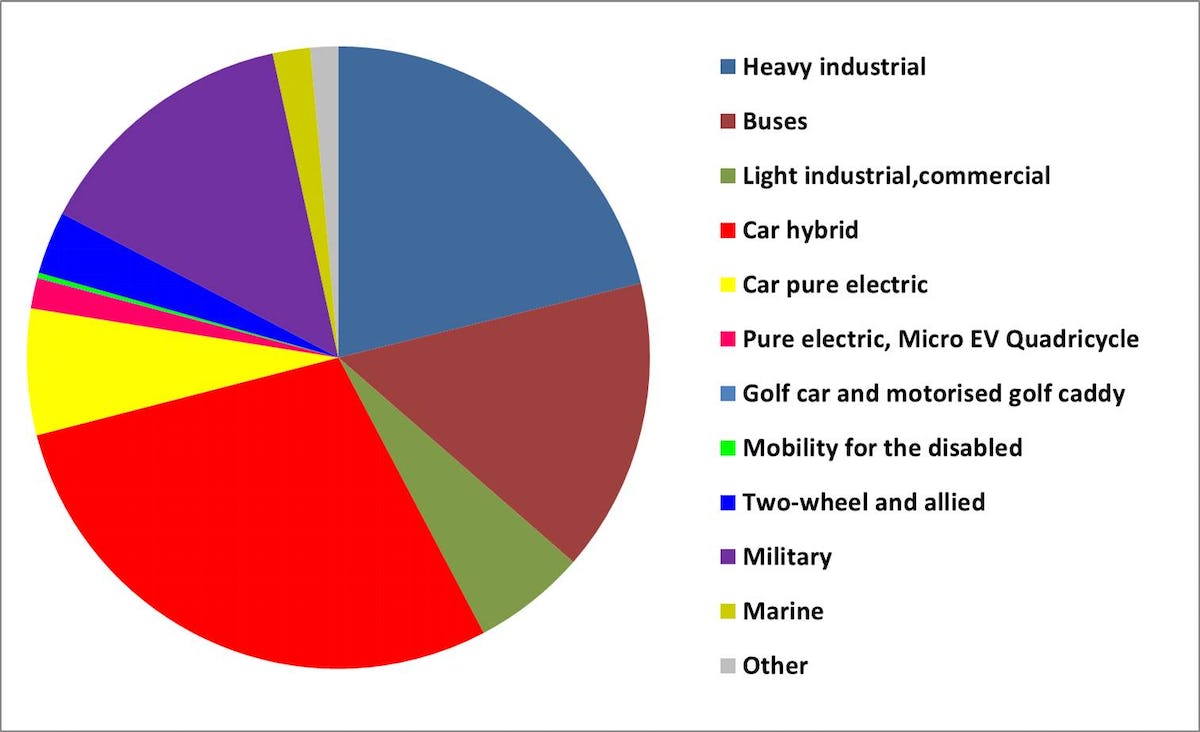