What Will Happen to the Cultured Meat Industry in 2020?

What Will Happen to the Cultured Meat Industry in 2020?

Dez 17, 2019 Dr Michael Dent
Will the hamburgers of the future be made from animal cells grown in a lab instead of inside a cow? Cultured meat, also known as "cell-based" or "clean" meat, could soon be making its way to our dinner plates, completely bypassing the need for animal slaughter and overcoming some of the major environmental issues that currently plague the global agriculture industry. Even though no products have yet been released and there are major challenges with cost, regulation and scale up, the industry is growing rapidly, with investment reaching a new high in 2019.
The recent IDTechEx report, "Plant-based and Cultured Meat 2020-2030", projects the cultured meat market to reach $514 million in sales by 2030. But what does the immediate future look like for cultured meat? This article looks at what happened in the cultured meat industry in 2019 and explores what's in store for 2020.

The industry will continue its rapid growth

Investment has been growing rapidly in recent years. Following major successful funding rounds for companies like BlueNalu, Future Meat Technologies and Wild Type, the total invested reached $80 million in 2019, a 120% increase from 2018. This is likely to continue in 2020, with companies channelling the extra funding into R&D. The science behind cultured meat production is relatively well-established; the main challenges are to do with cost reduction and scale up. Both require significant investment into equipment, such as high efficiency, large scale bioreactors, and process engineering, so companies will be keen to secure additional funding.
In response to the growing excitement and investment in the field, many new start-up companies are being founded. In 2016, there were only four companies operating in the space.
Now it is more than thirty. We can expect this trend to continue into 2020, with more companies getting involved in the race to bring cultured meat to market. 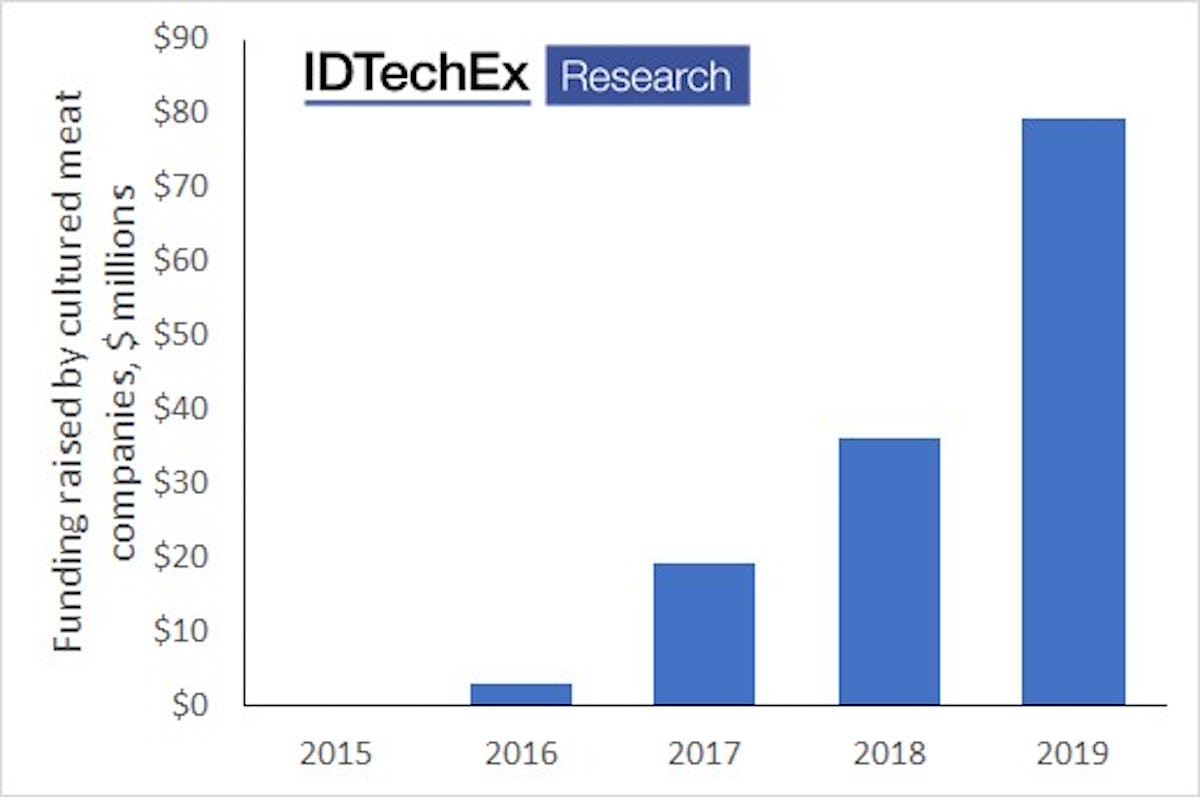 Arguments over labelling will heat up

Throughout 2019, arguments have brewing about what to call cultured meat, and whether it even counts as "meat" at all. Cultured meat companies have switched between the terms "clean meat", "cultured meat" and "cell-based meat", with industry advocate The Good Food Institute recently announcing that "cultivated meat" is now the preferred term.
Whether cultured meat actually constitutes "meat" is a controversial topic. Bills to prevent plant-based and cell cultured products from being labelled as "meat" have already been put
forward in 25 US states and the US Cattlemen's Association petitioned the US Department of Agriculture (USDA) in 2018 to restrict use of the term "beef" to products derived from slaughtered cattle. In 2020, cultured meat companies are likely to begin the regulatory approval process for their products, and so the arguments over labelling will become increasingly volatile.
Whilst this debate over what to call the products may at first seem trivial, it could have major implications for the cultured meat industry. If the industry is banned from using the term "meat" and forced by regulators to use unappealing terms such as "artificial muscle protein" or "lab grown meat analogue", it could be very off-putting to consumers and seriously stymie the growth of the fledgling industry.
At the less extreme end, the debate over "cultivated" or "cultured" meat also matters. Consumers are notoriously sceptical of biotechnology, especially within food, and what people call this category could be critical to the success of the industry. Terms like "lab grown" or "cell-based" meat could sound scientific and unappealing, but "cultured" meat may be difficult to understand. The term "clean" meat implies that conventional meat is dirty and could be viewed as unnecessarily derogative towards the agricultural industry, whose support and acceptance may be required to overcome the labelling debate.

Will 2020 see the first products released?

In short, probably not. The regulatory battle in the US and EU has not yet properly begun and no companies have yet made a formal application. The regulatory process itself could take at least a year in the US and will likely take more than 18 months in the EU. Whilst the regulatory process is easier in places like Hong Kong and Singapore, which have been touted as likely first markets for cultured meat, it is difficult to see any product releases happening in 2020.
Even with regulatory approval, the question remains as to whether a quick release is even a good idea. At the Cultured Meat Symposium 2019, David Kay from Memphis Meats commented that the first cultured meat products could colour perceptions of the industry for years. He pointed out that the plant-based meat industry has struggled for years to shake off the perception that its products are unappetising, based on consumer perceptions of the first generation of products. The botched introduction of genetically modified food products in the 1990s scarred the industry for decades and the cultured meat industry will be keen to avoid making the same mistakes.
However, getting the first products right could take years, especially if this involves securing supply chains, reducing costs and scaling up production capabilities. This also risks investors getting tired of feeding money into the industry without seeing returns. Nevertheless, this may be the most likely outcome. In the IDTechEx report Plant-based and Cultured Meat 2020-2030, we forecast that the first products will not be released until 2023. Growth will initially be slow, as products are released in selected restaurants at premium prices and companies wrestle with scale up and cost reduction. Towards the end the decade, however, we believe that growth will pick up, as cultured meat begins to become a viable alternative to the conventional meat industry. 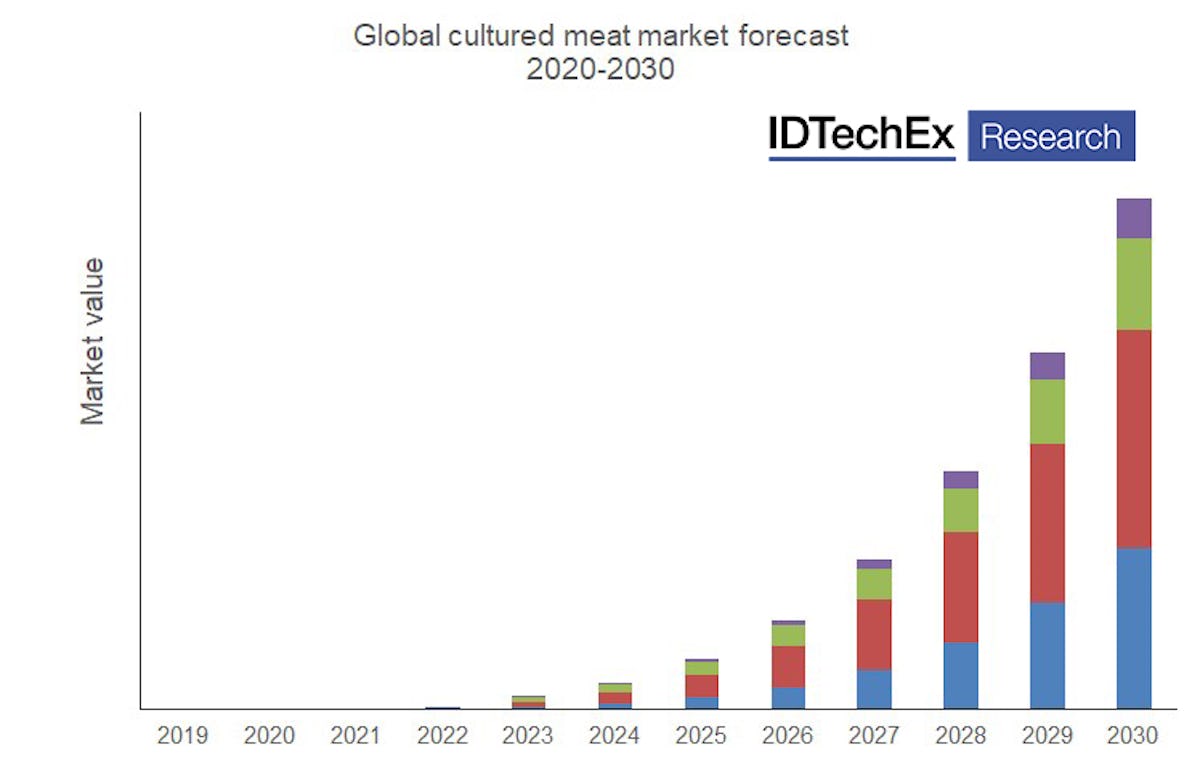