What's hot and what's not in Printed Electronics

What's hot and what's not in Printed Electronics

Apr 13, 2016 Raghu Das
IDTechEx has been following the printed electronics market for fifteen years. In this article we provide ten brief updates across different parts of the industry, with further detailed analysis available at Europe's largest event on the topic, held in two weeks in Berlin on April 27-28.

The LCD industry has experienced thinning margins, calling for new technology innovation to provide product differentiation. One of the developments that has come to market quickly is Quantum Dot (QD) LCDs. The key selling point for QD is that they enable a much wider color gamut with minimal re-engineering of the LCD panels. The marketing spiel is OLED like performance from LCD like prices. There are already a range of QD LCD products on the market today but there are three main hurdles holding them back from the big time.
First is cost. The current estimate is that a QD film will add around $100 for every square meter of display. Second, there is no guarantee that consumers will notice the improvement. Supporters of quantum dots say that it is currently the only way to obtain TV displays that are compliant with the Rec. 2020 standard. But while the specifications are impressive, it is worth noting that most consumers do not even know that their LCD devices (TV, laptop, or tablet) have a limited colour gamut. However, marketing can win consumers round. Third is toxicity - the best quantum dots are made with Cadmium, a substance which is usually banned in the European Union under the RoHS regulations. The display industry got an exception to introduce cadmium in TVs because of the benefits in terms of lower energy consumption (thereby reducing carbon emissions) but this is reviewed from time to time.
IDTechEx Research find that in 2016 23.6 million QD devices will be sold with a market value of $657 million, rising to $11.3 billion in 2026. See our latest research on Quantum Dots here.

2. Energy Storage: A Home for CNTs and Graphene

Hundreds of tons of carbon nanotubes (CNTs) are being used each year in batteries in premium devices such as smart phones and electric vehicles, whereby they enable faster charging of the batteries. For example, one brand of smart phone can charge from empty to 70% in an hour versus to 55% in an hour without the addition of CNTs. CNTs have moved past the period of hype. Graphene is at an earlier commercialization stage, but a number of graphene suppliers are prioritising energy storage, including for supercapacitors, silicon anode batteries and lithium sulphur batteries. Indeed, of the total market for graphene in 2026, energy storage applications will be 40% of the market share for graphene - larger than any other graphene application.

A typical mobile phone has between 3 to 5 antennas. The antennas can be made using a variety of techniques such as stamp foiling, flexible FPC, laser direct structuring (LDS) or aerosol deposition. The antennas are typically structurally integrated to save space, meaning that they form part of a device component and are not on a separate PCB.
In addition to cost and space utilisation, lead-time and turn-around time are becoming increasingly important industry drivers. This is because the consumer electronics value chain operate very tight and frequent release schedules. A key challenge for stamp and flexible FPC techniques is that a change in design will necessitate a change in tooling.
Now Aerosol deposition is an emerging competitor. After being primarily an R&D tool for many years, aerosol deposition machines are now being installed in higher numbers, having already established a commercial production capacity of >15million antennas per year. This technique does not require special thermoplastic and is already competing with LDS on cost. This is a market on the rise, with many silver nanoparticle ink suppliers lining up to qualify their inks with the leading aerosol machines on the market. 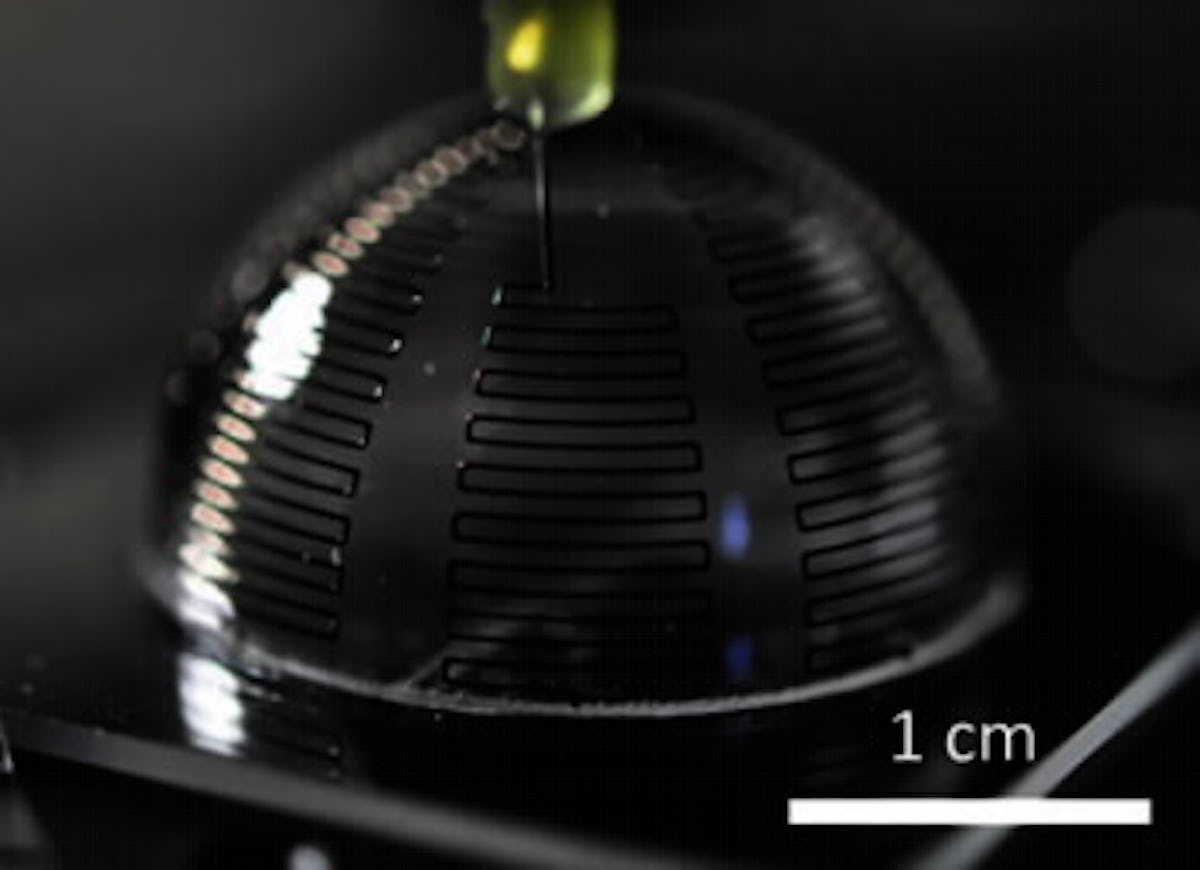 Printed electronics and wearable technology are converging across sports and fitness, healthcare and personal electronics. Just two years ago only a few players such as Nagase and DuPont had launched stretchable conductive ink but now many more have entered. Key applications of smart clothing are sport-specific apparel, real-time monitoring of babies and the elderly for caregivers' peace-of-mind, and monitoring of first responders. Substrate TPU is screen-printed with conductive, dielectric and "sensor" inks, then laminated onto fabric. As an example, DuPont are working with 150 different companies on applications of their stretchable inks. This is in addition to those developing conductive yarns and conductive polymer textiles.

A key opportunity around wearables is how to connect the electronic textiles to the typical box of electronics containing the processing electronics and power. Snap fasteners are most commonly used today but as we move away from boxes of electronics to textile integrated devices the challenge of securing components to the textile remains. When interviewing over 80 organizations involved in e-textiles, IDTechEx found that after developing sensors, connectors are the second highest priority of the players involved.

6. Come Back Reflective Displays, All Is Forgiven

Whoever says that flexible displays are a tiny market are wrong. They miss out the 100 million electrophoretic displays that have been sold, which are plastic based and flexible, although the final form may be rigid. Volume shipments peaked in 2011 in the form of e-readers but have been falling ever since as consumers increasingly chose colour LCD tablets. Sales of reflective display e-readers have now stabilized at about ten million units a year. Rising from this are many new applications for reflective displays, with the greatest growth coming from electronic shelf edge labels. These will use some 40 million reflective displays this year, up from 30 million in 2015. Additionally Apple has taken over some of the Qualcomm Mirasol assets and Amazon remain hard at work with the electrowetting technology acquired from Samsung. Several new entrants are also coming to market with new reflective display technologies.

LG Display announced last year an investment of approximately $900 million in order to build an OLED display facility. The total investment in the plant, which is designed to produce both large-size OLED TV and flexible OLED panels for smartwatches and automotive displays, is expected to reach more than $8.7 Billion. LG Display will open the Printed Electronics Europe event in a Cornerstone presentation, covering the latest progress at the company and their outlook for flexible and printed electronics. IDTechEx find that by 2020 the market for plastic based OLEDs will reach $16 Billion.

From 2013 to 2016 the champion efficiency of unstabilised Perovskite PV has gone from under 16% to over 22%, as benchmarked by NREL in the US. But despite the strong enthusiasm last year there are few companies developing Perovskite PV devices and the topic now barely registers in most main stream press. However, that does not mean much is not happening behind the scenes. Champion cell efficiencies make good headlines but that does not mean they are product ready. Most effort has been concentrated on materials development - improving stability while maximizing efficiency and in some cases creating lead free versions. This will take time, with IDTechEx Research anticipating that the first products will be hybrid silicon-perovskite PV systems creating a market of over $200 million in 2025. 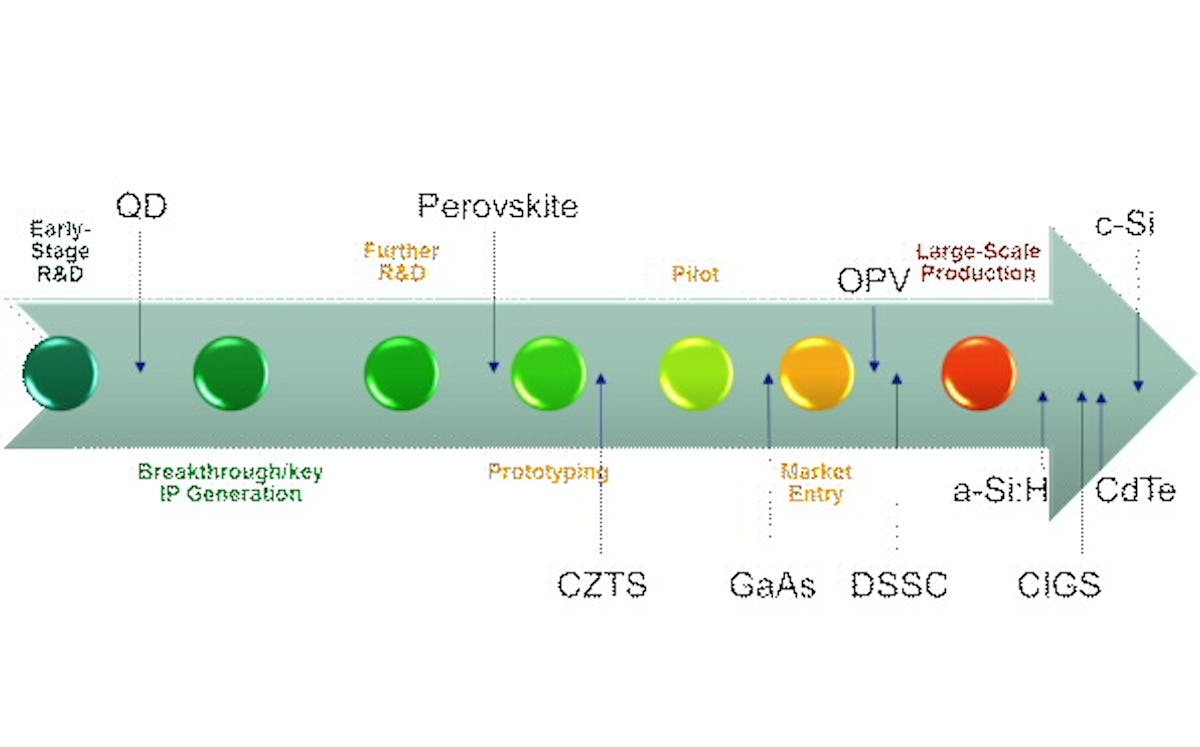 Last year IDTechEx Research correctly predicted that the transparent conductive film (TCF) industry had entered a period of intense consolidation. The TCF industry generated more than $400m in 2015 but consolidation was triggered because ITO film makers adopted the policy of protecting their market share at the expense of profit margin to stave off the threat of substitutes. This meant that they slashed their prices piecemeal every time they sensed they were to lose business. The net effect was that selling prices were reduced from around $30/sqm to less than $20/sqm in less than 1.5 years. This was compounded with disappointing demand for medium to large sized touch displays and All in One PCs. As a result, it became a buyers' market.
The cycle of over-valuation followed by a correction induced via a consolidation period is common in many emerging industries and is a natural part of the commercialization process, an aspect that IDTechEx Research has seen elsewhere when studying emerging technologies. Such times are prime opportunity for companies to pick leading technologies at discount prices. IDTechEx Research expects that this will be witnessed in the next 1 to 2 years in the TCF industry.
For more information refer to the market research report Transparent Conductive Films (TCF).

In-mold electronics (IME) is an emerging and hot area in printed electronics. In this approach, functional and electronic layers are first printed on a 2D flat sheet. The sheets are then thermoformed or injection-moulded into a 3D shape. In general, the approach tends to be best suited to applications where high volumes of low-complexity circuits are required. Therefore mechanical switches used in the automotive and appliances sectors are the primary initial targets. The key benefits are that thin and elegant devices with structurally-integrated electronics can be developed. This technique, the suppliers claim, can reduce weight by 70% by removing wires and buttons and by enabling the PCB size to be reduced. It can also reduce by around 30% since the process is simple and includes few manufacturing steps.
IDTechEx Research is aware of several white good companies ha have put our RFQ to suppliers for IME switch interfaces. We remain optimistic about this sector and expect that IME devices will become nearly a $1bn market by 2026.

The Event that covers it all: Printed Electronics Europe in Berlin April 27-28.

See the whole ecosystem at one event: the IDTechEx Printed Electronics Europe event in Berlin on 27 & 28 April is the place that brings the key players together. Presentations from big brands include Coca-Cola, LG Display, Ravensburger, Sony, ARM, Jabil, NASA, Flex, Sharp, GSK, Abbott and many more see the full agenda here.
PrintForwardTweetLikePinredditShare
Previous
Next