Order now
Order in a Subscription About subscriptions
Show All Description Contents, Table & Figures List Pricing Related Content
Vehicle designers not yet considering solar bodywork are crazy. The tipping point is with us mainly because single-crystal silicon photovoltaics providing 50% more electricity per unit area is now viable even on the sides of vehicles. In all, three times as much electricity. Adoption is now so rapid that IDTechEx has rewritten its report within a year. "Solar Vehicles 2021-2041 2nd Edition" explains in 260 pages. Mostly, it covers the biggest potential - land vehicles - but it gives latest learnings on water and in the air.
See how purchasers of solar on-road vehicles now have a wide choice from solar adding a few hundred kilometers yearly to total energy independence for tens of kilometers. That includes the typical city dweller doing 12,000 km yearly. Never plug in? Escape the tyranny of unreliable, over-busy charging stations with their stupidly different payment means and interfaces? Solar vehicles let you plug in if you need more range but they typically get by on half the battery, reducing problems from that troublesome component too.
Suddenly the choice is huge, the sources global. The energy-independent cars range from spartan to designer cars. China offers solar vehicles ranging from golf cars to family cars and people movers but just one brand Economia in Pakistan now offers all those plus an enclosed solar trike. All are made in Pakistan. On the other side of the world, new solar cars include Aptera solar 3 wheeler claiming world record 1600km 1000 miles range on full battery. Globally, solar two seaters are now multiply-sourced.
Importantly, solar bodywork is now viable for conventional, hybrid and battery vehicles. Read Hyundai's roll-out. Tesla Cybertruk has solar option demonstrated. Yes, the big names are piling in now, Toyota even working on a further leap in solar range to over 20 km yearly. Many solar boats are there already. Indeed, energy-independent solar electric boats are commonplace and some multi-mode harvesting here has lessons for land vehicles.
Trucks now come centre stage with a major program on solar-assisted hybrid trucks headed by Scania, part of VW Group. Sono Motors, with the largest solar car orderbook, has just demonstrated an all-over-solar truck. Solar truck savings will double the typical profit of a trucker. Learn why Sono Motors has licensed its all-over solar technology to a leading robot shuttle maker and Dethleffs sells the format on its recreational vehicle.
"Solar Vehicles 2021-2041 2nd Edition" is continuously researched by multi-lingual IDTechEx analysts worldwide. It even explains what happens when the next solar vehicle technologies become affordable on land and it scopes intermediate technologies such as CIGS and OPV being introduced on vehicles.
The report starts with an Executive Summary and Conclusions, sufficient for those with limited time and including 10 and 20 year forecasts and a 20 year roadmap. The Introduction then explains the history, applications and technologies including a new concept by IDTechEx. Learn next options such as expanding solar on vehicles, even trucks and boats as zero-emission minigrids in these critical appraisals with predictions.
Chapter 3 covers solar cars, vans, rickshaws, trikes including the major Australian program developing a multi-purpose, reconfigurable solar vehicle. Cars with less battery, more range are here, including Fisker and Lightyear. There are many solar golf cars, vans and other options from Italy to India. Chapter 4 concerns solar buses and trucks from new Fraunhofer advances in Germany to solar versions in Brazil and Uganda. From Norway to Japan, this chapter also includes people movers and recreational vehicles and a surprising variety of solar technologies in action, with reasons why.
Chapters 5 and 6 concern solar assisted trains and solar agricultural robots, some energy independent.
However, solar boats in Chapter 7 are a bigger business than trains and agribots and solar aircraft covered in Chapter 8 are rapidly becoming important. More-powerful, more-expensive solar film is on airship and fixed-wing drones in the Stratosphere and LEO satellites, all essential for surveillance and the next generation 5G and 6G communications. However, the Chinese have just demonstrated solar independence in a lower altitude drone day-and-night and trials on regular electric light aircraft will result in large adoption later even on battery-electric regional aircraft now being prepared. Learn what technology and when. The report then ends with a long chapter on the big picture of photovoltaics, its technologies and evolving improvements and uses.
Anyone entering the value chain of solar vehicles land, water and air from regulators and investors to users and system operators must look at the big picture in the form of land, water and air and all technologies to benchmark best practice, winners and losers. Only the new IDTechEx report, "Solar Vehicles 2021-2041 Second Edition" gives all this with the latest information appraised by highly technical analysts creating infograms, graphs and forecasts that are simply understood not nostalgic or academically obscure. From the start, clarity is assisted with a comprehensive glossary of the jargon. This report serves those seeking commercial success and benefits to society.
This report answers questions such as:
Analyst access from IDTechEx
All report purchases include up to 30 minutes telephone time with an expert analyst who will help you link key findings in the report to the business issues you're addressing. This needs to be used within three months of purchasing the report.
Further information
If you have any questions about this report, please do not hesitate to contact our report team at research@IDTechEx.com or call one of our sales managers:
AMERICAS (USA): +1 617 577 7890
ASIA (Japan): +81 3 3216 7209
ASIA: +886 9 3999 9792
EUROPE (UK) +44 1223 812300
Order now
Order in a Subscription About subscriptions
Table of Contents 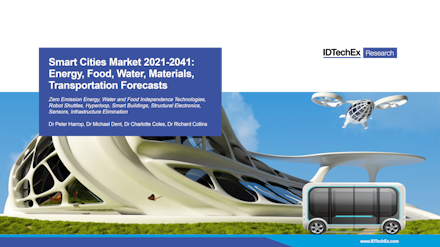 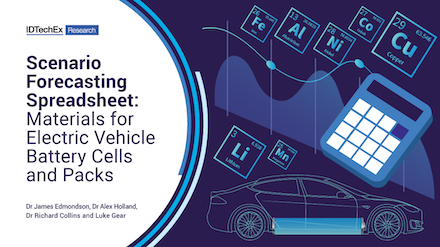