Change of leadership of the global market value of supercapacitors?

Change of leadership of the global market value of supercapacitors?

Avr 15, 2013 Dr Peter Harrop
Maxwell Technologies, which has been the leader in supercapacitors worldwide, has been overstating its results by improperly recording certain sales through distributors. It has made the following statement, "Maxwell believes that the restatement of revenue related to these distributors will decrease previously reported revenues for fiscal year 2011 by approximately $6.5 million and decrease revenues in the first three quarters of 2012 by approximately $5.5 million in the aggregate". Most of Maxwell's overall revenue relates to supercapacitor sales, so how does this affect supercapacitor market forecasts? Leading analyst IDTechEx that has studied the supercapacitor/ultracapacitor market has been looking again at the figures and it concludes that Maxwell is not indicative of the overall industry.
The number of developers and manufacturers of supercapacitors, also called ultracapacitors, is rising very rapidly, having doubled from 40 to 80 in the last few years. All are taking some business, so Maxwell is losing market share. Although most of the business is taken by supercapacitors containing toxic, flammable acetonitrile, we are now very near to the point where we over 50% of manufacturers offer devices based on non-flammable, relatively non-toxic electrolytes, many of them aqueous. Others use improved organic electrolytes and solid electrolytes are on the way. Many of those in these various technologies are likely to gain market share because they have improved safety and often improved performance in certain aspects as well. IDTechEx Research forecasts for supercapacitors are shown below.
Fig 1. Global Supercapacitor market ($ billions) 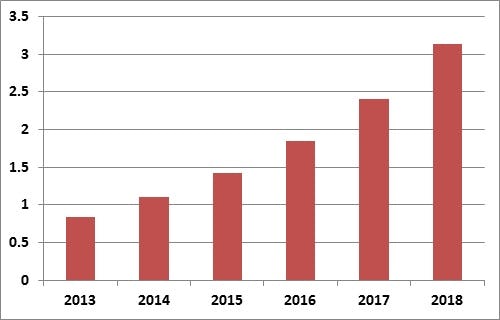 Source: IDTechEx research report "Electrochemical Double Layer Capacitors: Supercapacitors 2013-2023" www.IDTechEx.com/EDLC
The supercapacitor industry is rapidly moving to one where the leaders are big companies making big investments in the technology and where they sell to big companies. For example, CSR Zhuzhou Electric Locomotive in China has unveiled a prototype light metro trainset which uses supercapacitor energy storage to operate without an external power supply. Sooner or later, Chinese supercapacitor maanufacturers will get this business. Underfloor power pick-ups charge the roof-mounted supercapacitor unit from a fixed supply while the train is at a station. Charging takes 30 seconds and can power the train for 2 kilometers. Energy regenerated during braking is recovered for reuse. Commercial production is envisaged by 2014, with the manufacturer believing the technology could be viable for use in more than 100 smaller and medium-sized Chinese cities, as well as for the export market.
The largest orders for supercapacitors are no longer being landed by Maxwell Technologies. For example, there has never been anything like the Meidensha/Sojitz $318 million (¥25bn) contract to supply two 2 MW Meidensha CapapostTM regenerated energy storage units for Hong Kong's South Island Line metro project. Sojitz is not involved in the supercapacitor banks in this system, which also includes transformers and switchgear. The installation of the supercapacitor technology is expected to reduce traction power consumption by 10% on the 7.1 km five-station line, which is under construction to connect Admiralty with South Horizons from 2015. Compare that with Maxwell Technologies' faltering gross sales value in supercapacitors of the order of $100 million.
In collaboration with Sumitomo, in 2015, Meidensha will put supercapacitors with 3.4 times today's energy density into volume production, the target after that being five times and that may mean half the energy density of today's lithium-ion batteries, though the company does not release figures. IDTechEx Research believes that, subject to price, such devices could make a dent in the lithium-ion battery business not just expand supercapacitor sales, since a supercapacitor is in many respects and ideal "battery", something real batteries can never attain and increasingly cost over life will be superior not just life - "fit and forget".
These very advanced Meidensha supercapacitors are completely different. The wound foil current collectors are replaced by Sumitomo aluminium celmet porous plates. The active electrodes consist of carbon nanotubes not the activated carbon that most manufacturers employ today. The non-flammable electrolyte is an ionic liquid not the solvent/ solute approach of today that is usually based on acetonitrile and employed by all of today's leaders. The resulting Meidensha supercapacitors have high energy and power density, with widened temperature range. They are primarily targeted at electric vehicles, both hybrid and pure electric. Meidensha says they will improve both acceleration and range and even permit faster braking energy regeneration. Samples are being released in 2013. Their goal is to have the capacitor used in 30% of the green vehicles sold in Japan and account for 50 billion yen (about $500 million) in sales by fiscal 2020.
Meidensha of Japan sources supercapacitor modules from other suppliers but even here it is pushing the boundaries. For example, Meidensha will deploy the Japanese JM Energy Corporation ULTIMO TM supercabattery ie Asymmetric Electrochemical Double Layer Capacitor AEDLC. Its variant of this is known as a lithium-ion capacitor and, in most respects, it is intermediate between a lithium-ion battery and a symmetrical supercapacitor. To begin, these new cell designs have formed the basis of a system for compensation of short-term power disruptions for Chubu Electric Power Co., Inc. The system is designed to comprehensively protect plant manufacturing facilities from electric power failure caused by lightning strikes and other causes. Upon confirmation of reliability, Meidensha will commercialize the system starting 2014. Supercapacitor manufacturer JSR Micro is linked to JM Energy. Such groupings seem likely to land the biggest supercapacitor/ supercabattery orders in future.
In short, Maxwell Technologies is being sidelined. IDTechEx Research sees no reason to revise its forecast of robust 30% on-going annual growth in the global market for supercapacitors and their variants. They even record more and more cases of supercapacitors completely replacing batteries for traction and energy harvesting. Other supercapacitors are increasingly being put across batteries, reducing the amount of battery needed, particularly in applications employing large lithium-ion battery packs for traction. For more see the IDTechEx Research general report "Electrochemical Double Layer Capacitors: Supercapacitors 2013-2023" (www.IDTechEx.com/edlc) and the drill down "Supercapacitor / Ultracapacitor Strategies and Emerging Applications" (www.IDTechEx.com/superapps) which gives the technological roadmap and applications resulting.
There is one other lesson from this story. Small companies like Maxwell Technologies are attracted to take a listing because it gets them funding and prestige and an exit for early investors but there is a price to pay. The intense attention to half year and even quarterly results is not conducive to long term objectives and it diverts the attention of management. When reporting errors arise, as in this case, all hell is let loose. Perhaps they should have stayed private.
About IDTechEx
IDTechEx guides your strategic business decisions through its Research and Events services, helping you profit from emerging technologies. We provide independent research, business intelligence and advice to companies across the value chain based on our core research activities and methodologies providing data that business leaders, strategists and emerging technology scouts crave to aid their business decisions. For more information see www.IDTechEx.com