May 12, 2005
Screen printing is one of the oldest printing technologies known to man. It is certainly a long time since it was the preferred way of printing labels yet here it is - back again as the preferred method of printing the silver ink used for Radio Frequency Identification RFID antennas on the smart labels that are now the most common form of RFID. These antenna patterns are connected to a silicon chip, or, more rarely, a Surface Acoustic Wave SAW chip, in the label.

Back to the future

RFID and SAW chips are made using photolithography but gradually all this will be replaced with printed transistor circuits. These are being made experimentally and some are now in pilot production, at companies such as Plastic Logic in the UK, with ink jet and spin coating techniques sometimes with some photolithography. However, new, finer, more conductive inks are becoming available and they permit flexographic, offset and other high speed printing technologies to be used for RFID antennas. Inks that are semiconducting, conducting and insulating will be printed in the form of transistor circuits which will slowly replace the silicon chip in labels. Some will be ink jet printed and others will use flexo, gravure and so on. We shall have come full circle and the new way of identifying things automatically - RFID - will have gone back to the origins of printing then progressed to modern high speed printing technology, including printing on uneven surfaces.

Why a boom in RFID labels?

RFID is the use of radio frequencies or thereabouts to read data on small devices - increasingly labels - on just about anything, with few problems of obscuration, orientation or electronically reading many at a time. You can hide them in a label and still read it electronically and you can throw 1000 of them past an electronic reader and they will all be read in a blink of an eye. Increasingly, that means they can replace barcodes, antitheft tags, anticounterfeiting features and much more besides, all with one label, and the potential is trillions yearly.

RFID returns to its origins

RFID started sixty years ago as a way of identifying things remotely such as aircraft and manufacturing parts. So far, about 250 million items have been tagged but the biggest RFID markets by value are contactless smart cards and car "clickers" that open your car from a distance. These are products in their own right and about one billion have been sold. In the next few years, we shall see billions to tens of billions of RFID labels on conveyances such as pallets and cases containing many items but that will only be the biggest RFID market for a few years before the tagging of small items such as postal packages and retail products shoots ahead to become the largest market. The cards, clickers and conveyance tags will grow as a business but item level will grow bigger and faster. That will be going back to the origins of RFID. This is detailed in the new IDTechEx reports RFID Market Forecasts, Players, Opportunities 2005-2015 and Item level RFID. Food is the most critical and the highest volume of the items that are starting to be tagged with RFID and other intelligent labels involving DNA, temperature profiling and so on as analysed in the new IDTechEx report, Food and Livestock Traceability.
Figure The new UPM Rafsec "Flag Tag" for conveyances, that can "look" in two directions. 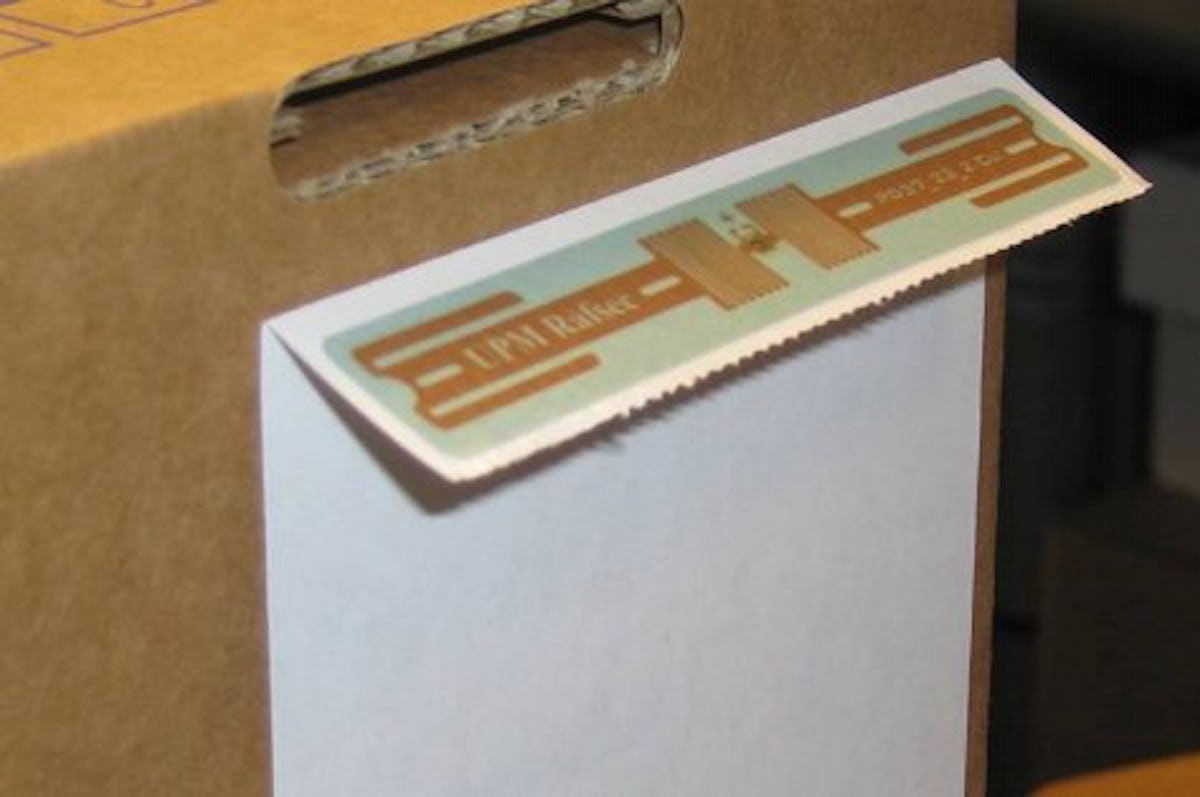 History is repeating itself in terms of when you need such a label and when you do not. Many early barcodes were applied in the form of labels but nowadays almost all of them are printed "free" as part of the graphics on a package or a product. RFID will repeat that sequence.
The labelling industry will have about ten years of booming new label markets in RFID but then, yes, things will start to go full circle. As with barcodes in their maturity, the RFID circuits will be mainly printed directly onto products and packaging. That label market will also start to disappear - but not before 2015. Manufacturers such as UPM Rafsec and service providers such as Hewlett Packard are growing substantial businesses serving this industry.

Need another label! Self-adjusting use by dates

Fortunately, many other totally new markets for labels will be emerging in the next ten years. Take the self-adjusting use by and sell by date or other indication of expiry. Today these are tiny non-electronic labels that rely on chemicals changing colour to show expiry - they do not show a date at all. These Time Temperature Indicators TTIs can be inaccurate and subject to batch to batch variation and stray parameters such as light and humidity, though they are low cost at a few cents each and one billion a year will be sold soon. They do not show a large unambiguous warning - usually just a colour change in a small dot.

Electronic self-adjusting use by dates

Now consider the electronic successor that is not yet available. In its initial form it will be a label that will sense the temperature-time profile of the product and reveal a large word "EXPIRED" when appropriate. Later versions will give a date that scrolls down if you leave the milk, say, in the sun. It may incorporate RFID but it does not have to. The printed display may be used for other purposes such as giving clear instructions in large, even glowing, fonts. However, although companies such as KSW Microtec and Infratab are going up market with such labels by giving them large displays, RFID and more polling points when data are recorded, the massive opportunity is for self adjusting use by dates that cost only tens of cents in billions and a few cents at larger volumes. Someone will crack this and create a massive new label market. On sensitive products, such as drugs, self adjusting use by dates may even become a legal requirement.

But not for ever

However, later, the self adjusting use by date will be printed directly on the product or package and a label will not be needed - this takes us full circle as with barcodes and later RFID labels. The good news, though, is that there is always another label market coming along. For example, Arla Foods, Europe's leading dairy company, has a milk carton in its laboratory that speaks the words "Put me back in the fridge" if you leave it out in the sun. There is little prospect of printing loudspeakers directly onto things. The most elegant way of doing that will be the transparent laminates of NXT Sound in the UK that are already giving high quality sound in this year's NEC cellphones in Japan. The cellphone display has the transparent sound laminate over it. Such laminates will be in the form of labels stuck over printed electronics wherever it appears. Another label market will be born.

Another interesting aspect of the smart label revolution is smart skin patches. These are labels put on animals and humans: indeed they are made by labelmakers such as Avery Dennison. A smart skin patch uses "iontophoresis" by which a small voltage across the skin makes it more porous to chemicals. Though non-electrical patches are quite popular for anti smoking, Parkinson's disease and other treatments, the "passive" application of ointments depends on temperature and is essentially uncontrolled and slow. With the electrical assistance of a small, often a printed, battery, the application can be accelerated and even controlled in time and quantity.
The current version from Alza, a Johnson & Johnson company, is like a small calculator applied to the skin and it would not be made by labelmaking equipment. It is large because it holds more of the drug and it has extra features such as an "on demand" button. By contrast, the smart patches from Power Paper in Israel and licensed to seven companies in the last year and those from Birch Point in the US are like Band Aids. Patches and labels use similar production technology.

Thanks to these companies and others a large market for smart skin patches is opening up where they replace needle injections and many other, less pleasant, less safe and less accurate forms of drug delivery - they will not simply replace existing passive patches. Imaginative companies such as Power Paper even have totally new uses for these patches such as the application of dye to give tattoos that last a few months - time to change your mind! So how are they all made? Well, currently it is a matter of screen-printing most of the batteries and the conductor and resistor patterns but the new IDTechEx report "Printed Electronics" elaborates what comes next. Back to the future......
For more information, attend this forthcoming event from IDTechEx, which is the only event where you can learn how to make RFID smart labels, and hear the needs of users - Smart Labels USA 2005, 28-29 June, Baltimore, USA www.smartlabelsusa.com