Sept 19, 2017 Dr Khasha Ghaffarzadeh
Cast your mind back a few years and you will find a conductive ink business that appeared very mature and slow moving. The boom years of the photovoltaic industry were ending, the dominant big suppliers seem well entrenched, and the technology was, at best, only incrementally improving, with new technologies such as nanoparticle inks failing to get traction.
Then everything began to change. For example, the leadership in the photovoltaic market started to change hands, establishing a more diversified supplier base. The market requirements for touch screen edge electrodes became more stringent, forcing the industry to innovate in fine line inks to stay in the game. Strong competition showed its adverse effects on market shares and margins all around.
All this convinced suppliers to change strategy. Suppliers, from big to small, focused on diverse nascent emerging markets, hoping to seed and enable the next big market. Products became broad out of the necessity to meet the diverse set of emerging requirements. The industry had started to innovate again. The IDTechEx Research report, Conductive Ink Markets 2017-2027: Forecasts, Technologies, Players, shows that these markets will increase by an order of magnitude in the coming years. 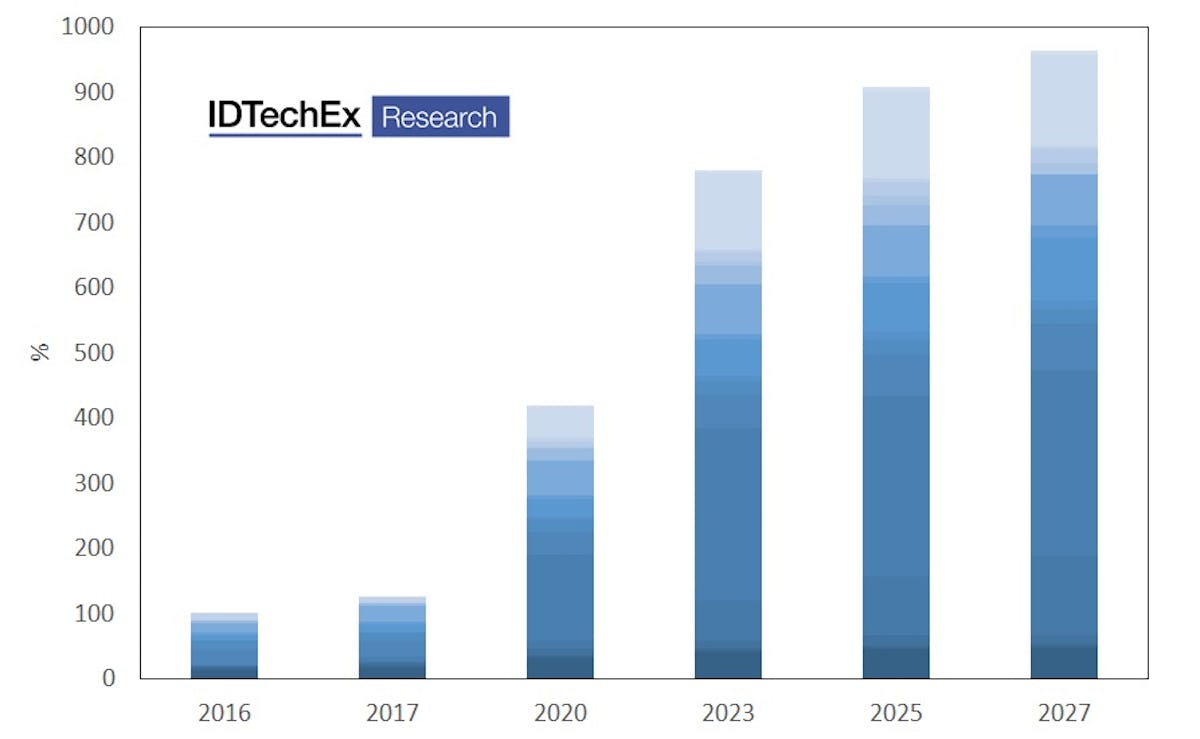 Growth in conductive ink applications which are not core today compared to their total value in 2016. This figure shows that these markets will grow an order of magnitude over the coming decade. The applications here include, in particular order: piezoresistive sensors, glucose sensors, capacitive sensors, e-textile/wearable ink, IME inks, automotive seat heaters and occupancy sensors, 3D antenna for consumer electrodes, UHF/HF RFID, ITO replacement, OLED lighting, conductive pens, 3D printed electronics, desktop PCB printers, EMI shielding in consumer electronics and printed logic and memory. All our forecasts assume a fixed silver raw prices. Note that we also provide figures in volumes (tpa). Source: IDTechEx Research (www.IDTechEx.com/inks)
Never ceasing to adapt
All this has been possible thanks to the enormous adaptability of conductive inks technology to different requirements. Indeed, this technology has never ceased to adapt. This has always been a core strength, constantly enabling the industry to open new applications as older ones declined or became rife with low-cost competition. This ability now underpins the development of this new wave of applications.
Here, we will briefly highlight how new conductive inks are enabling new applications. In our report, Conductive Ink Markets 2017-2027: Forecasts, Technologies, Players, we provide more detail, highlighting the latest progress, analysing the challenges, assessing the new requirement set, and examining the market potential.
Stretchable electronics: A transition taking place in the wearable technology world: wearable devices are finally becoming truly wearable. Currently, the rigid-component-in-a-box is still prevalent, but the industry is slowing transitioning towards stretchable and comfortable devices. Conductive inks technology is helping enable this transition.
They are in fact still a hot topic: the supplier base of stretchable inks has expanded in the past three years; the new inks are much higher performing compared to the earlier generation, and numerous prototype and even commercial products have been launched. The rising interest in conductive ink is demonstrated below. Here, IDTechEx statistics show how the portion of companies working on an e-textile product with an ink-based solution has risen.
Conductive ink adaptability is vital here. In general, this is because stretchable printed inks on textiles need to satisfy new requirements in terms of stretching, washability, and substrate compatibility. More specifically, it is because the industry is still in its infancy and does not yet have common figures-of-merit or performance targets. In fact, suppliers are often amazed by the wide spectrum of performance and cost requirements that they receive which swing from one extreme to the next. This explains why the ability to customize formulation is a competitive advantage.
The formulations (resin, particle size distribution, binders, etc) have already been changed to enable stretchability. The period of innovation, however, has not ended. For example, the inks may transition from being deposited on a plastic substrate to direct printing on numerous textiles; the conductivity changes with elongation will be more suppressed or made more predictable; or the inks become more washable, reducing reliance on encapsulation layers such as TPU that limit breathability and comfort. This will be an exciting space to watch in the coming years even if it gets to a slow commercial start.

% e-textile companies that utilize different solutions. Note how ink based solutions are on the rise. Source: E-Textiles 2017-2027: Technologies, Markets, Players
Structural electronics: A megatrend is to transition towards structural electronics. Here, the structure itself becomes functional, doing away with separate bulky PCBs and shortening (and changing) value chains. This saves space and weight whilst opening up vast new design possibilities. Conductive inks are also at the forefront of this trend.
One approach towards structural electronics is in-mould electronics (IME). It combines two high-throughput processes: printed electronics and thermoforming (and moulding). It enables the functional elements to become a part of the structure. IME is a technology on the cusp of commercial success after several false starts in the past.
The adaptability of conductive ink technology enabled it to become the first major IME-compatible functional material. Here inks are specially formulated to withstand a major one-off elongation events and the thermoforming/moulding conditions. They must also work well with all the other inks in the stack. In fact, IME is now an opportunity for suppliers to offer a portfolio of inks and the supplier base has responded by launching multiple inks.
The progress work on structural electronics is not limited to just IME. Conformal printing can also be seen within the same context since it enables metallizing 3D surfaces. Here too inks suppliers are having to modify their formulations to render them compatible with the new deposition processes, to make them adhere strongly to various plastic substrates, and to give them high conductivity at low annealing temperatures to succeed against the likes of laser direct structuring.
3D printed electronics is also part of the same trend. Here, the idea is to 3D print intelligent objects with structurally-integrated circuitry, adding a new dimension to 3D printing prototyping. This trend also brings with it new requirements such as strong adhesion to common 3D printable substrates as well as low-temperature curing.
Touch screens: The trend to narrow the bezel will not stop until the bezel vanishes. This trend has constantly pushed the requirements on touch screen edge electrodes, narrowing the linewidth-over-spacing (L/S) specifications from 100/100 µm to now beyond 20/20. Printing therefore risked fully losing its place when requirements went beyond capabilities of precision screen printing. The adaptability of conductive ink technology however came to the rescue, again. Here, photo-patternable and laser-cut inks were developed, enabling fine features made using a hybrid approach.
Conductive inks have also been eyeing the ITO replacement opportunity. Direct printing had seemed not good enough due to its perceived inability to print ultra-fine lines (<<10 µm). The short-term solution was to commercially use a hybrid approach in which conductive inks filled narrow trenches embossed into the substrate. Now, however, after years of development, direct printing has also demonstrated <10um capability, increasingly making it a viable option, particularly for large area touch surfaces. Adaptability of the conductive ink technology was vital in all this, enabling the industry to develop new printing processes.
In our report, Conductive Ink Markets 2017-2027: Forecasts, Technologies, Players, we analyse 25 application areas. Each is different, demanding that the ink technology is adapted to its particular needs. And innovation is not just limited to the examples we chose to highlight above: it is everywhere in all applications. In automotive applications, the trend to substitute glass rear windows with polycarbonate substrates is driving innovation in demister pastes in the short term. As for the long term, the industry has begun contemplating the replacement of the current printed demisters with transparent metal mesh (early stage). In photovoltaics, the trend to narrow the busbar's footprint continues, pushing down silver consumption costs whilst freeing up more area to sunlight. In printed memory applications, smooth particle-free inks may be used to prevent a short circuit through the device's vertical structure. This list continues and the versatility of the ink technology will always open up new frontiers.
For more details, we recommend the IDTechEx report - Conductive Ink Markets 2017-2027: Forecasts, Technologies, Players. Here, you will find our analysis on numerous emerging technologies and applications. Furthermore, we will provide detailed ten-year market forecasts for 25 applications.
PrintForwardTweetLikePinredditShare
Previous
Next