Okt 13, 2016
At IDTechEx we are convinced that lithium-ion batteries will dominate the automotive scene over the coming ten years and possibly the coming fifteen years. During that time we shall see peak lead acid battery the biggest nail in its coffin being when electric vehicles more widely abandon them and even those conventional vehicles modified to stay legal under impending carbon dioxide laws abandon them, relying totally on lithium-ion units.
However, that is not to say that there are no other contenders.  We have closely assessed the research and see lithium-sulfur as in the lead but with considerable challenges to overcome before it hits prime time such as life and volumetric energy density - being too big though lighter. See the IDTechEx reports,"Advanced and Post-Lithium Batteries 2016-2026 and Lithium-ion Batteries 2016-2026. Also visit IDTechEx Show! in Santa Clara California 16-17 November 2016 with its extensive coverage of solid state batteries and others plus their future applications.

One wild card is the flow battery. Most people rightly see these as very large units suitable for grid applications such as peak shaving but one or two organisations are thinking the unthinkable about putting them in cars because they are headed for $100 per kWh and size and weight might just fit the bill in due course. Toyota's advanced research people told us recently that they would not dismiss the possibility.
Nanoflowcell has been exhibiting sports cars it says will use their flow batteries in pure electric form at 48V and achieve 1000 miles pure electric range. Even that voltage is counter to received understanding on design of car powertrains. Pure electric cars are generally headed up towards 800V for light weight and performance. Yes there is a huge move to keeping conventional cars legal under impending pollution laws by making them 48V at least in part but not pure electric vehicles where 48V is typically only seen in very weak duty cycles such as golf cars and postal delivery vehicles. See the IDTechEx report, Mild Hybrid 48V Vehicles 2016-2031
Nanoflowcell pure electric car with 1000 miles range said to be launching in 2016

Source Nanoflowcell
Flow battery technology is immature. There is everything to play for and although pumping liquids from reservoirs does not sound compact or reliable in a car but who knows? Watch this space. 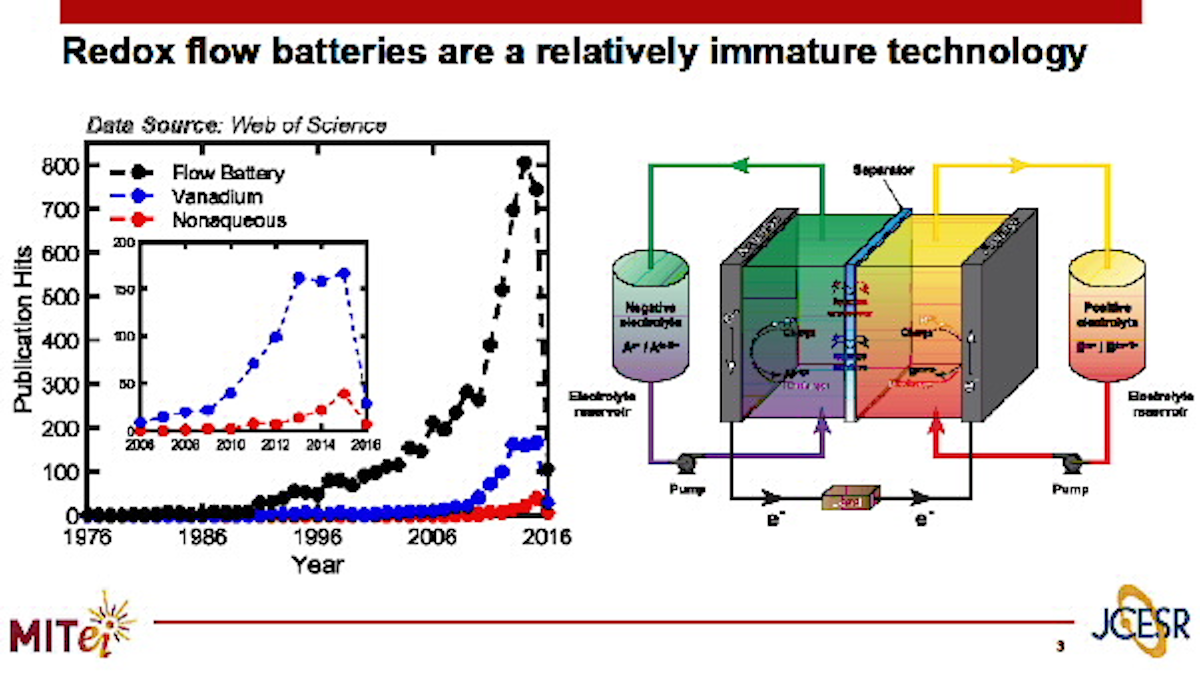 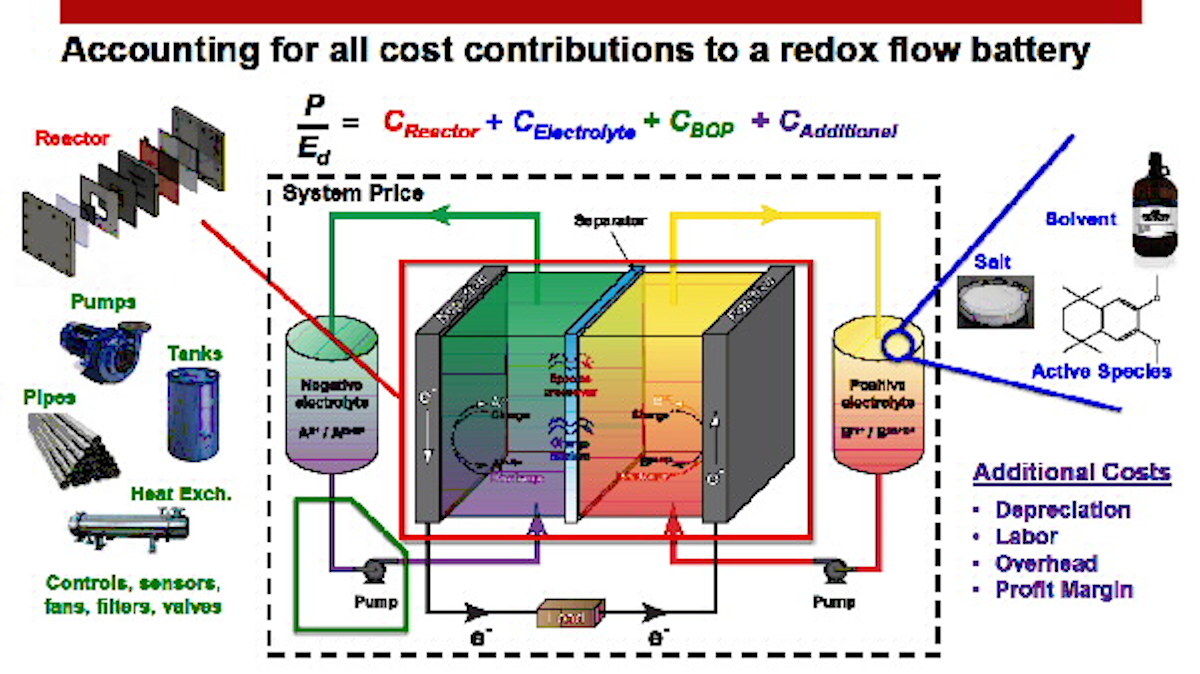 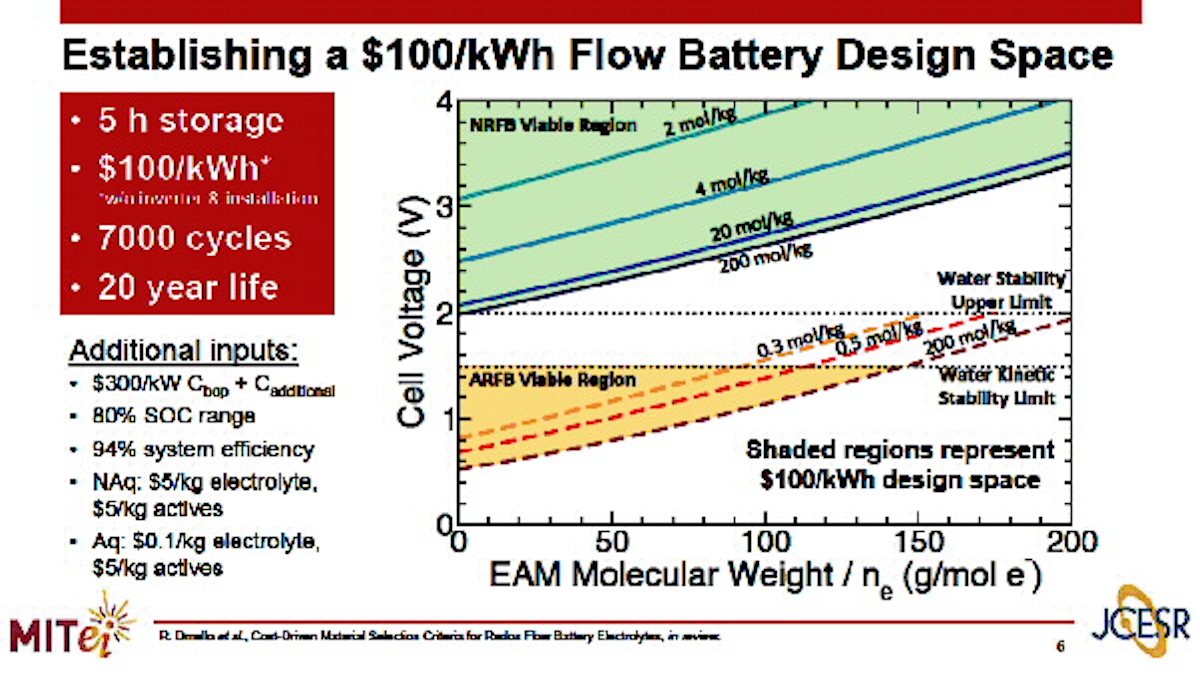 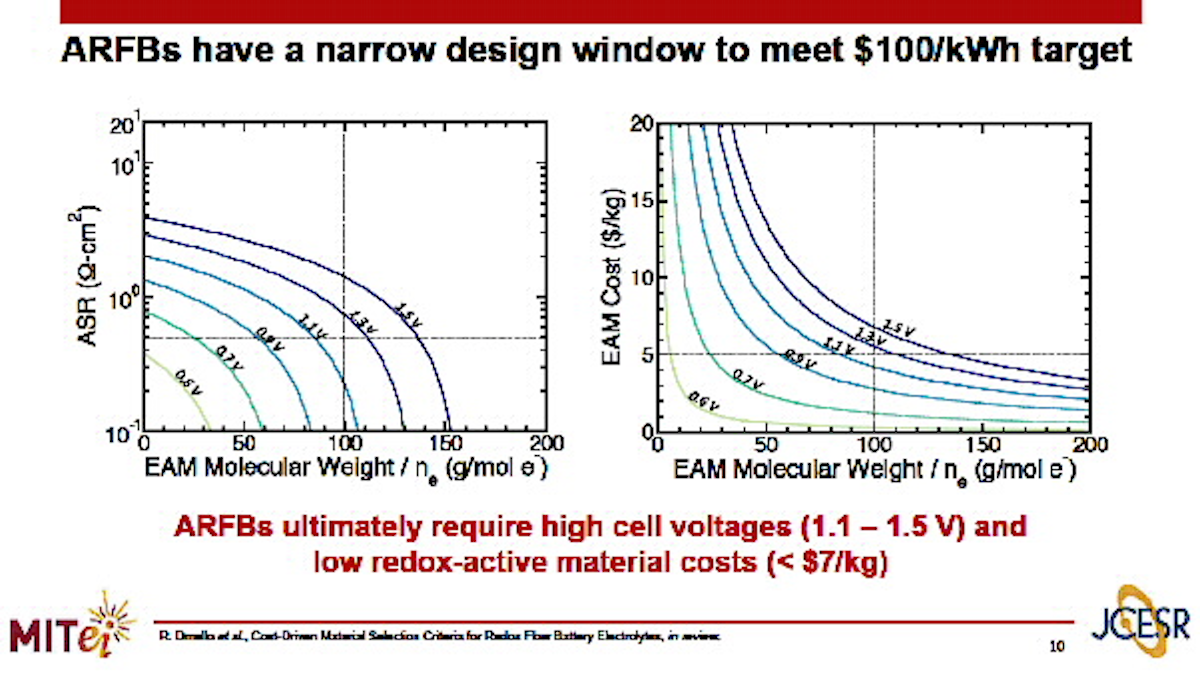 Source: JCESR et al
Redox flow batteries typically have a very low energy density, which is roughly one order of magnitude lower than the best Li-ion. The way Nanoflowcell aim at introducing redox flow technology in a car is by making use of a non-rechargeable chemistry. An analogy can be drawn from hearing aid devices, which rely on zinc-air batteries: these batteries can last for much longer than Li-ion, NiMH, or other chemistries, but have to be replaced with new ones once they reach their end of life.
Such a model obviously becomes economically not feasible when we ramp up from microwatt-hours to kilowatt-hours for an EV, but redox flow cells enjoy an added benefit that other battery chemistries lack. In its simplest configuration, a redox flow battery comprises two electrolyte tanks (the anolyte and the catholyte) that react with each other via redox reactions (hence the name). Once the energy contained in both the anolyte and the catholyte is completely consumed, these liquids are replaced with new ones, the same way an ICE car replenishes its tank with gasoline, and the car. The rest of the flow battery remains in the car and the spent electrolytes can be hopefully collected, recycled and reused by another customer. If the combined cost of the electrolytes, of the refuelling infrastructures, and of the recycling process is competitive, Nanoflowcell can be expected to deliver a pure electric car that can be charged within minutes, offer a good driving range, and an alternative battery chemistry for the automotive industry.
Redox flow electrolytes can be extremely cheap (0.1$/kg for the aqueous ones), which means that they could be serious contenders of gasoline even in the US. Additionally, redox flow batteries are known for their longevity, with many companies already offering 20 years warranty for their stationary batteries. The end game is to make rechargeable flow batteries that would eliminate the recycling step from the equation, but until then Nanoflowcell's product proposition offers a viable bridge to pure EVs. Among the disadvantages, it is worth mentioning that flow batteries are not capable of delivering much power, therefore small supercapacitors and/or Li-ion batteries might still be required for acceleration and regenerative braking. For an overview on supercapacitor technologies, please see our dedicated reports Supercapacitor Technologies and Markets 2016-2026, Supercapacitor / Ultracapacitor Interviews, Strategies, Road Map 2015-2025, and Supercapacitor Materials 2015-2025: Formulations, Forecasts, Roadmap, Companies.
Top image: Nanoflowcell
PrintForwardTweetLikePinredditShare
Previous
Next