Okt 18, 2013 Dr Peter Harrop
Analysts IDTechEx have recently pointed out that industrial and commercial electric vehicles (hybrid and pure electric) are now a bigger business than electric cars and will remain so for the coming decade, while making almost all the profit of the two put together.

There is another Cinderella category of electric vehicles that is also however quietly successful. It is the smaller on- and off-road ones, notably the closely related car-like micro-EVs variously registered as motorcycles, or "Quadricycles" in Europe. Plus there are other categories much less onerous than car homologation, including power chairs and three-/four-wheel "scooters" for the disabled, e-bikes, two-wheel on-road e-scooters and e-motorcycles. All these are covered in the unique IDTechEx report, "Light Electric Vehicles, Mobility Vehicles, E-Motorcycles and Micro-EVs (Quadricycles) 2013-2023" (www.IDTechEx.com/LEV). Many make good profits now and some are potential for the future.
Fig 1. Division of light/small electric vehicles market value by application, 2013 and 2018. 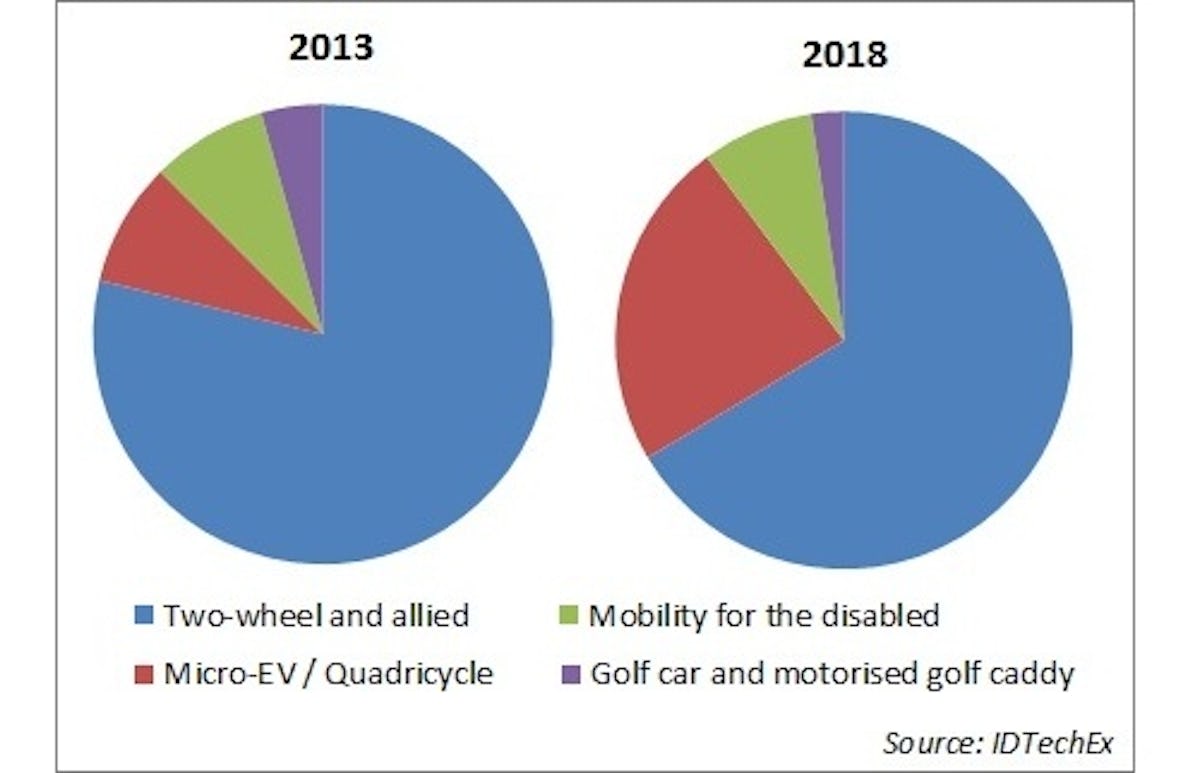 Detail on e-bikes: rapid growth in the USA

Complementary to this work one of its authors, Edward Benjamin, has published more detail on e-bikes under his respected eCycleElectric company name. During the one-year period July 2012 to July 2013, this company finds that the USA electric bike market appears to have doubled over numbers published by Electric Bikes Worldwide Reports for 2012. Searches of Customs and Border Protection records, phone surveys of dealers, internet searches and interviews of distributors and dealers have revealed a doubling of USA e-bike sales in the last 12 months.
908 retailers, not including mass merchants such as Wal-Mart and Amazon, claim to be selling electric bikes. These dealers include electric bike specialists, electric vehicle specialists, motorsports retailers, internet retailers, independent bicycle dealers, hardware stores, car parts stores and more. Major mass merchants such as Wal-Mart, Sears, Target, Best Buy and Amazon are also participating, although not in all of their stores.
134 brands were identified as being offered for sale through these channels. Of those brands, at least 54 imported new product during this period. Some brands are represented by product left over or on close out, but at least 30 brands are clearly in business, active and thought to be growing. While most electric bikes are imported to the USA from factories in China or Taiwan, companies such as Prodeco and Optibike assemble in the USA. Some complete bikes come from Europe.
Almost all parts (bicycle parts, motors, batteries, controllers, etc.) used to assemble an electric bike are imported from China or Taiwan. Estimates of the number of bikes assembled from these parts are included in the total estimate of USA sales for the 12 months ending in July 2013 of 159,000 units, compared to estimated 70,000 the previous year, says eCycleElectric

E-bike sales are growing less rapidly in China, where over 90% of the market remains but profits are elusive. However, they are growing rapidly in Europe, though reliable figures are tough to find, with only the Netherlands keeping official records and talk of much fraud by which what is recorded as an e-bike import is often a plain bike falsely attracting a tax break. Though in IDTechEx interviews this year in the Netherlands and Czech Republic some say only 700,000 electric bikes are being sold in Europe this year, the broader view is that the figure is about one million boosted by kits. Profits are being made, premium pricing is common and lithium-ion batteries are used in contrast to the majority of e-bikes in China.

Booming market in vehicles for the disabled

IDTechEx notes that the vehicles for the disabled are now well over 1.3 million yearly across the world. They are mainly bought in Europe and the USA by people that are simply obese or old and not registered as disabled - this leads to impulse purchases and one of the most profitable, recession-proof EV businesses.

The micro-EV business is also moving ahead rapidly and profitably for many. They are a luxury amusement in the West, in the form of the Renault Twizy for example, and a volume business in emerging countries. For example many companies are now seeking to replace the 3.5 million three-wheel taxis in the Philippines to tackle chronic air pollution. IDTechEx recently interviewed one Philippine company that has finance in place that is independent of the World Bank funding for 100,000 such e-taxis. In contrast, golf cars are a static but highly profitable business for the two leading manufacturers and e-motorcycles are having difficulty getting much traction, if you excuse the pun, though even Harley Davidson is now studying whether to make them.