Sept 26, 2012 Dr Peter Harrop
The Internet of Things was conceived in Massachusetts Institute of Technology in 1998. It was believed that RFID tags could be made so cheaply that they could be fitted to trillions of items, even printed directly onto them like most barcodes today. After all, about three trillion items of consumer packaged goods are made yearly in the world and it seemed that we were headed for one trillion postal items yearly. Barcodes and phosphor dots were woefully inadequate for monitoring at a distance and sometimes at speed: these things could be dirty, torn and misoriented and trying to read them one at a time was ridiculous. Automated monitoring en-masse throughout the value chain could make logistics faster and more cost effective, reduce theft and counterfeiting and provide other benefits such as no stock-outs in shops. All that was needed was a new numbering system to handle more items and a few simple improvements to systems and, yes, ways of making the RFID tags for one cent or less, would be easily achieved by design tweaks and sheer volume. It has not turned out that way.
Human frailty intervened in the form of committees writing specifications of military complexity for a host of "nice-if" features, this making the tags more expensive than necessary. Even if that error had not been perpetuated, there was the problem that retailers are technophobic beyond their databases and terrified of anything regarded, even by a handful of people, as a potential threat to privacy. The usual ruse of requiring the suppliers to do it all for nothing, despite the benefit almost entirely accruing to the retailer did not work. It had worked with anti-theft tags but with RFID the costs were one hundred times larger and the suppliers of fast moving consumer goods, with their wafer-thin margins, dragged their feet even though they had unloaded hundreds of millions of dollars of losses on their over-enthusiastic, naive RFID sources. Many in the value chain went to the wall and only certain things such as tagging apparel became successful, with demonstrable paybacks. True, some countries are proceeding as a matter of national prestige rather than payback. For example Russia intend to RFID tag all postal items but, at best, it all adds up to tens of billions not trillions yearly, woefully inadequate in getting costs sufficiently low. Companies printing RFID to make it cheap have largely collapsed or failed, as yet, to get yield that is high enough for viability. Those making primitive, very cheap ink-stripe RFID run afoul of the over-specifying by retailers and others. For example, most passive tags are required to be read-write yet very few use that facility once it is in place.
Nonetheless, a catchy title like Internet of Things is too good to go to waste so it has been high-jacked by some of those making and using active tags and their systems i.e. ones with their own on-board power source which is usually a battery today. Over the last decade, the money spent on active RFID tags and systems has grown from around 10% of all RFID to something more like 30%. The percentage of all RFID projects that are active RFID has similarly grown, as monitored in the IDTechEx RFID Knowledgebase of 4500 projects in 124 countries and growing all the time. In the past, active RFID usually meant things like your car key fob opening or locking the vehicle at 30 meters, one-on-one. Some big military money went on active RFID with sensing but that was also usually one-on-one. However, nowadays the primary attention is on applying second generation active RFID called Real Time Locating Systems (RTLS) where, usually but not always, the tag knows its location thanks to "seeing" several RF emitters and applying various measurement principles such as time of arrival, angle of arrival, received signal strength and so on. More and more, this is done without human intervention in contrast to the nurse pressing her RTLS pendant in emergency, which was an early success. It becomes Machine-to-Machine (M2M).
Then there is third generation active RFID called Wireless Sensor Networks (WSN) or, in Korea, Ubiquitous Sensor Networks, where the tag is called a node because it acts as both RFID tag and RFID reader. To qualify for this terminology, it has to be a mesh network in computing terms, self-organising and self-healing. Drop them from a helicopter on an oil spill and they form a useful RFID system by themselves. This is all very like the internet so, bingo, let us call it the Internet of Things without a retailer in sight and with sensing in every case.
IDTechEx has the definitive report on the subject called Wireless Sensor Networks 2012-2022. This report is about progress towards automatically anticipating and monitoring forest fires, avalanches, hurricanes, failure of country wide utility equipment, traffic, hospitals and much more often over wide areas, something previously impossible. Starting with more humble applications such as meter reading in buildings - now a modest financial success for the leading participants, WSN will grow rapidly to well over two billion US dollars for the systems in 2022. The market for wireless sensor systems in general, mainly one-on-one, is far larger but some proposed standards apply to both and some suppliers make both types.
Figure 1. Total WSN Market 2010-2014 ($ Millions) 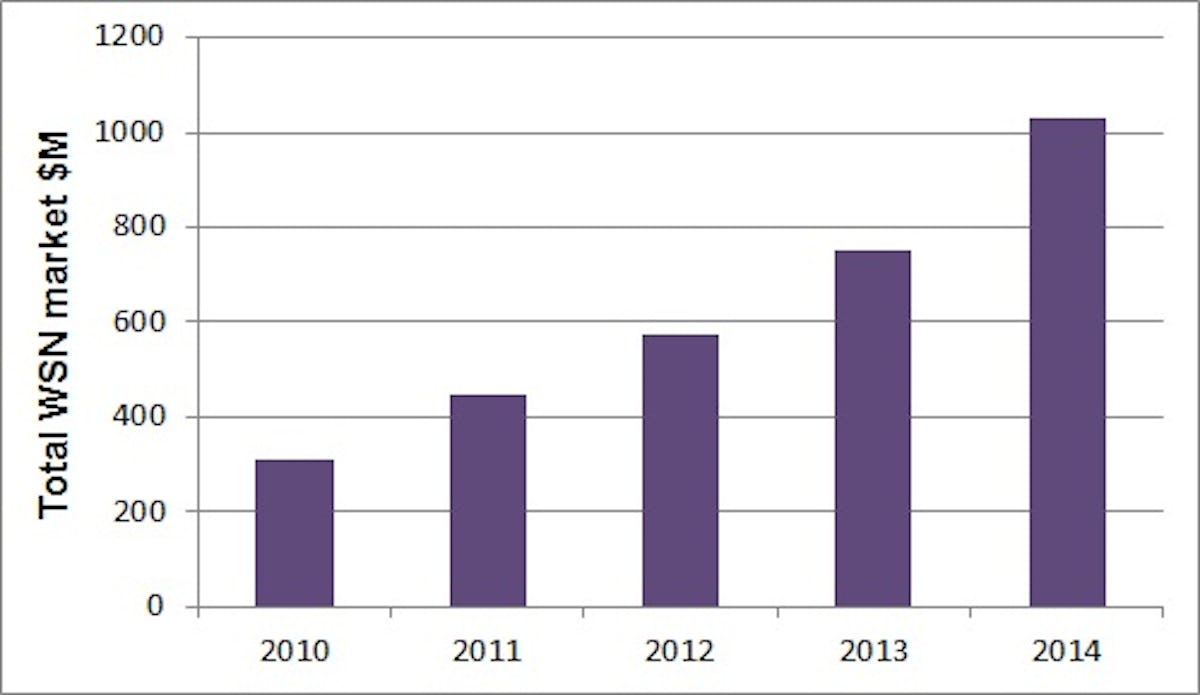 Source: IDTechEx www.IDTechEx.com/WSN
Ironically, WSN has some challenges in common with the original "let's deploy trillions of dumb tags" concept for the Internet of Things. The suppliers have yet to make big money. Deploying large numbers (in this case that means thousands in one system not billions) is technically challenging. The standards people are not providing the right global open standards i.e. conferring interoperability, use in many disparate industries and leading to long battery life or alternative forms of fit-and-forget.
Indeed, it will be rare for a WSN system to have more than a few tens of thousands of sensors in the next ten years but after that the dream of far larger deployments will be realisable. 90% of potential applications probably need 20 year life and mostly that calls for energy harvesting in forms not yet available - such as affordable, compact, multiple energy harvesting, where electricity is produced as needed from vibration, sunlight, heat differences etc. See the IDTechEx report, Energy Harvesting and Storage for Electronic Devices 2012-2022 .
In our WSN report, uniquely, we examine the business aspects in a manner that is accessible to those with limited technical knowledge but with much to interest technologists as well. While there are many academic texts about WSN dealing with the highly complex technical challenges of producing these systems, we put such systems in context, including forecasting their rollout, technical evolution and the commercial opportunities.
We reveal what will happen when, the paybacks, the potential markets, the killer applications and the intractable problems that will take longer to solve. Winners and losers, successes and failures - here is a balanced view of a very broad sweep of developers and suppliers including those beyond the ZigBee Alliance. Observing that some have been too optimistic in their forecasts for WSN in the past, we try to avoid the pitfalls of over-optimism. Yet we reveal the growth that is to come, eventually creating a substantial business of huge benefit to humankind. Many of the world's largest companies are working on this new form of the Internet of Things, seeing it as part of the move to ubiquitous M2M computing. Some are working on use of printed electronics, including printed sensors for such purposes and some on energy harvesting tolerant electronics (all those voltage spikes and unpredictable intermittency). Yet others are reducing the power required by node logic, memory and sensing. Progress is quite rapid because all these things are needed more generally beyond WSN, de-risking the investments. Excitingly, adjacent technologies such as one and two-way wireless sensors with energy harvesting and no batteries to replace are succeeding financially. Most notable is the EnOcean Alliance. It may become an open standard and move closer to being WSN.
PrintForwardTweetLikePinredditShare
Previous
Next