Oct 28, 2021 Dr James Edmondson
EVs certainly mark the path to a more environmentally friendly future, but there are still concerns around the sourcing of certain components or materials within EVs. As the market for EVs expands rapidly, the demand for components like electric motors does so along with it. In 2021, the demand for EV motors is expected to increase by 40% in the car market alone. Electric motors literally drive EVs, but many designs utilize kilograms of magnetic materials. These magnets rely heavily on rare-earth materials like neodymium and dysprosium, which are expensive, produce lots of waste and have various mining concerns. Will EV manufacturers continue to rely so heavily on rare earths going into the future?

The supply chain for rare earths is extremely constrained geographically. China accounts for the vast majority of worldwide production which has historically led to price volatility. Back in 2011, China restricted exports of rare earths seeing an approximate price rise of 750% and 2000% for neodymium and dysprosium respectively. Prices since have remained fairly stable aside from a 1.5 fold increase in 2017 thanks to environmental reforms in China. 2021 is proving to be especially volatile, with a 2.2 fold increase at the start of the year which has yet to settle down.
In addition to the price concerns, there are environmental concerns. Rare earths are extracted from ores which can contain radioactive materials such as thorium and extracting the required rare earths typically uses a huge amount of carcinogenic compounds like ammonia, hydrochloric acids, and sulphates. It has been estimated that processing 1 tonne of rare earths can produce up to 2,000 tonnes of toxic waste.
For EVs to truly be a transition to green technology something about the situation has to change.

Electric drive motors come in many different designs the most popular being permanent magnet machines, but some designs do not require permanent magnets (and hence rare-earths). The induction motor utilizes a copper or aluminum cage on its rotor, this design has been used historically by Tesla for its Model S and X. Some have adopted a wound rotor configuration with copper windings on the rotor such as Renault for their Zoe. Some, especially in heavy-duty or commercial vehicle segments, are opting for the switched reluctance motor which has a silicon steel rotor without the need for magnets or copper on the rotor.
Typically, permanent magnet motors present better power density and efficiency, hence why so many use them. As well as eliminating the magnets, there are efforts to reduce the rare-earth or at least heavy rare-earth content of the magnets. OEMs such as Honda and Nissan have reduced or eliminated the heavy rare-earth component.

What Is Actually Happening?

Despite the above concerns, according to IDTechEx research ("Electric Vehicle Motors 2022-2032"), in 2020, 77% of the electric car market used permanent magnet motors, a ratio that has remained fairly consistent over the past 5 years. 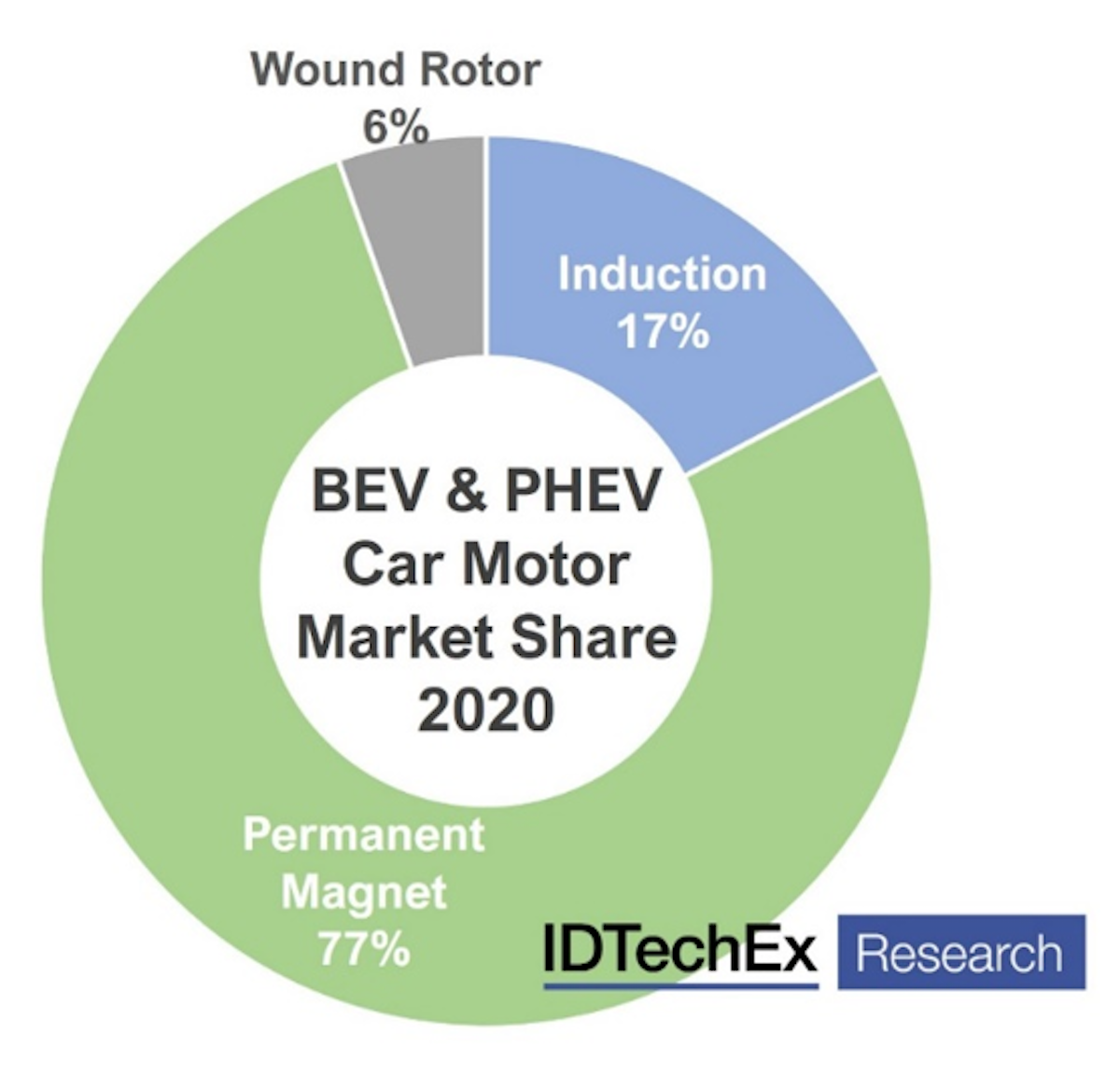 In 2020, 77% of the global electric car market was using permanent magnet motors. Source: IDTechEx - "Electric Vehicle Motors 2022-2032"
The huge neodymium price spike in 2011 may have factored into the decision by Renault to continue with their wound rotor design and for the development of Audi's induction motors used for the e-tron, but in general, with the settled price, we are seeing more announcements of a switch to permanent magnets. In 2018, Tesla adopted a permanent magnet motor for their Model 3 onwards whilst keeping an induction motor on the front axle and Audi's new Q4 e-tron for 2021 takes a similar approach. One key player who has recently made the switch to a wound rotor design is BMW for their 5th gen drive system which will power their next-generation EVs including the iX3, i4, and others.
Whilst we have seen some differentiation in the European market, as China largely controls the rare-earth supply, the price volatility is not as much of a concern and they are unlikely to shift away from permanent magnet machines. With China being one of the largest EV markets, this means that permanent magnet motors are here to stay.
Automotive development timescales are long, normally on the scale of several years, with the neodymium price volatility in 2021, we could see a few more announcements about the reduction of rare earths in the next few years.

The US Attempts to Compete

The US has made previous attempts to increase its involvement in the rare-earth supply chain and now the Biden administration has made it one of its priorities under the $2 trillion infrastructure proposal. MP Materials bought a previously closed mine in California in 2017, vying to restore the US's rare-earth supply chain with a focus on neodymium and praseodymium, and is hoping to become the lowest-cost producer. MP Materials are planning to complete their goals by 2025 ready for the ramp-up of EV production in the US. Lynas Corporation has received government funding for a processing plant in Texas for light rare-earths and has another contract for a heavy rare-earth separation facility also in Texas. Despite these goals and investments, China has invested approximately double the US in the energy-related transition over the last decade. The US will certainly have a big task to try and compete with China, especially on cost and we would expect China to remain dominant at least in the short term.

With China's current dominance of rare-earth supply, they are likely to continue to use permanent magnet motors in a big way. In the EU, we are seeing some differentiation in motor designs in order to avoid rare-earths but in general, they are further converging on permanent magnet designs for their superior efficiency and power density. However, efforts are being made to decrease the utilization of magnetic materials and especially heavy rare-earths. Even with these decreases, IDTechEx expects the neodymium volume demand from battery-electric vehicles in 2032 to be 11 times the demand experienced in 2021. 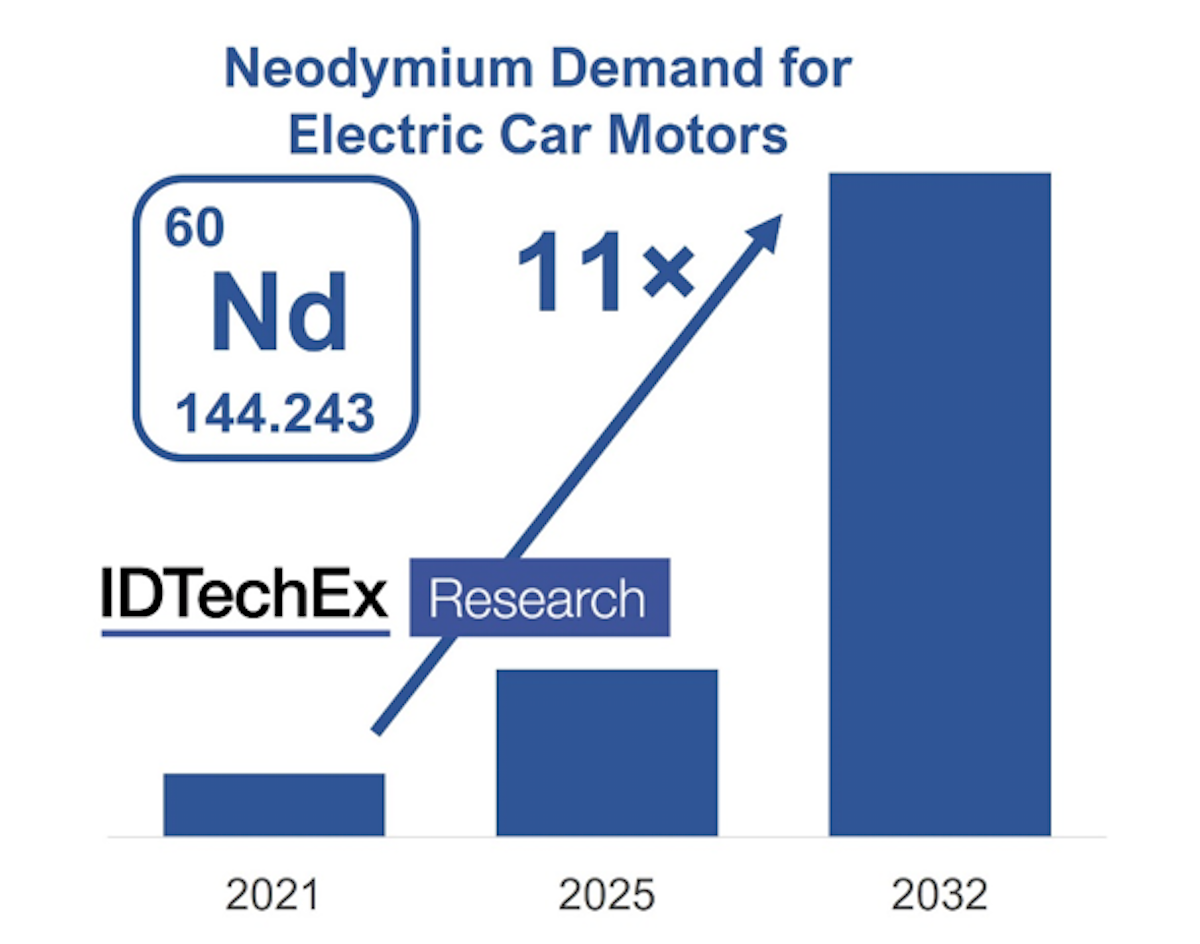 IDTechEx expects neodymium demand for electric car motors to increase 11 fold by 2032. Source: IDTechEx - "Electric Vehicle Motors 2022-2032"
IDTechEx's new report "Electric Vehicle Motors 2022-2032" takes a deep dive into the types of electric motor used in electric vehicles as well as emerging alternatives like axial flux and in-wheel motors. The report considers the EV market for cars, buses, trucks, vans, and two-wheelers across China, Europe, and the US, including forecasts for motor demand over the next 10 years. Granular motor performance statistics are given for these categories and regions including a detailed power and torque density benchmark of several motors used currently in BEVs, PHEVs, and future alternatives. IDTechEx's model database of 150 models with more variants is used to determine various trends in the electric vehicle motor industry. The materials used in the motors are also considered, addressing rare-earths in magnets in addition to copper and aluminum used in the motor windings, with material demand forecasts out to 2032.
For more information on this report see www.IDTechEx.com/EMotors. This report forms part of the broader electric vehicle and energy storage research from IDTechEx, who track the adoption of electric vehicles, battery trends, and demand across more than 100 different mobility sectors. This is summarized in a master report: www.IDTechEx.com/EV, or for further in-depth analysis, please see the full portfolio of electric vehicle research available from IDTechEx: www.IDTechEx.com/research/EV.
IDTechEx guides your strategic business decisions through its Research, Subscription and Consultancy products, helping you profit from emerging technologies. For more information, contact research@IDTechEx.com or visit www.IDTechEx.com.
PrintForwardTweetLikePinredditShare
Previous
Next