2021927 Dr Peter Harrop
With global warming kicking in and rising sea levels displacing millions to arid regions, there needs to be much more cooling of buildings. Species extinction, more widespread disease, unliveable heat, ecosystem collapse, cities menaced by rising seas - these and other devastating climate impacts are accelerating and are bound to accelerate in the decades ahead, according to the United Nations' Intergovernmental Panel on Climate Change, which promises a major analysis in 2022.
The proliferation of air conditioning has issues of cost, materials, maintenance, life, and making more heat than cold. Passive cooling means no power is needed. It is widely deployed in the form of translucent multilayer polymers facing the sky and convective chimneys in traditional African buildings. However, they have their limitations. Two new passive options need to be welcomed that use readily available, non-toxic substances - metamaterials and unprecedentedly white paint reflecting maximum sunlight away from a building.

Low-cost, rapidly erected houses are needed for people everywhere, including those millions about to be displaced by climate change and for the third world. One of the fastest and cheapest methods is 3D printing, as detailed in the IDTechEx report, "Concrete and Cement Reinvented: Growing the Market, Decarbonising 2022-2042". Typically, they are ugly and if they are to be painted anyway, why not use a paint that cools?

Whitest paint in the world

The whitest paint in the world has been created in a US laboratory. It is now in the Guinness World Records book as the whitest ever made. The scientists claim that it is so white that it could eventually reduce or even eliminate the need for air conditioning. However, analysts at IDTechEx caution that, not being adjustable, it is better regarded as part of the toolkit.
"When we started this project about seven years ago, we had saving energy and fighting climate change in mind," said Xiulin Ruan, a professor of mechanical engineering at Purdue University.
Making it really reflective also made it really white. The paint reflects 98.1% of solar radiation while also emitting infrared heat. It absorbs less heat from the sun than it emits, so a surface is cooled below the surrounding temperature without consuming power.
A roof area of about 100 square meters could add cooling power of 10 kilowatts, more powerful than air conditioners used by most houses but localized. Typical commercial white paint gets warmer rather than cooler. Paints on the market that are designed to reject heat reflect only 80% to 90% of sunlight and cannot make surfaces cooler than their surroundings.
Two features make this paint ultra-white: a very high concentration of a benign common chemical compound called barium sulfate - also used in photo paper and cosmetics - and different particle sizes of barium sulfate in the paint, scientists at Purdue said. Researchers at Purdue have partnered with a company to put this ultra-white paint on the market.

Metamaterials are composites that contain repetitive patterns tailored to manipulate electromagnetic and other emissions in a manner previously impossible. For the coming commercialization of electromagnetic versions, see the IDTechEx report, "Metamaterial and Metasurface Markets Electromagnetic 2022-2042". 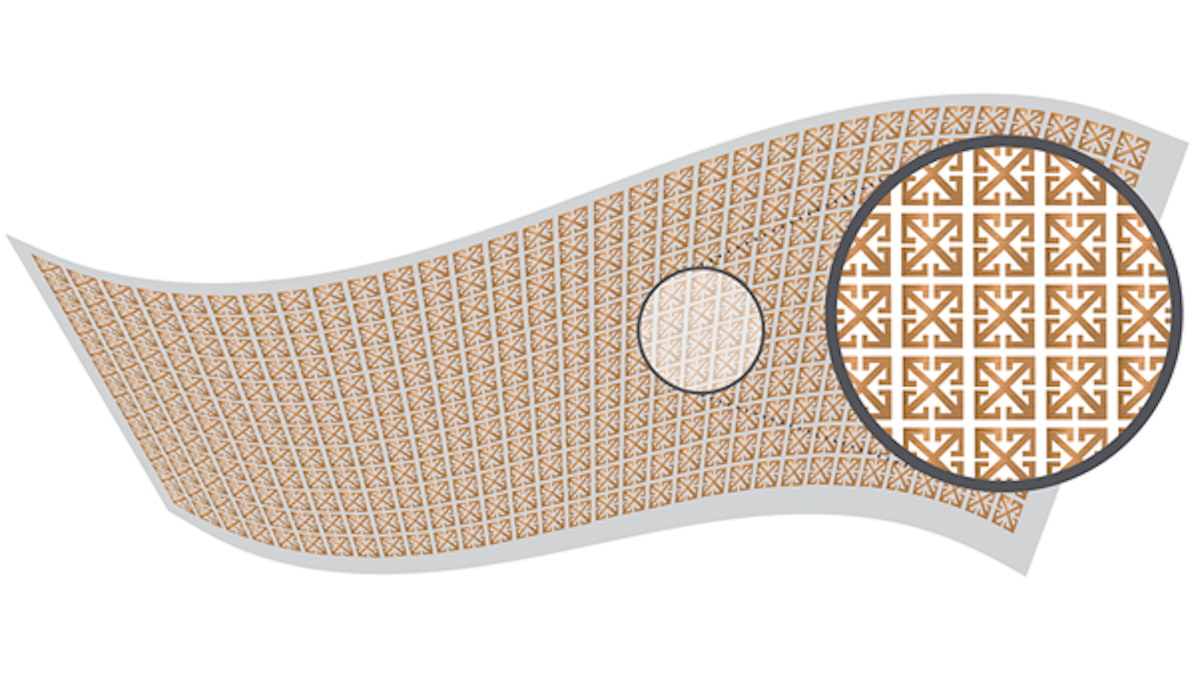 A metamaterial pattern. Source: IDTechEx
Many are transparent and one of these has been researched that may assist with the problem of silicon and some other photovoltaics needing cooling to maintain efficiency. The combination of high haze, low visible absorption, and high thermal emissivity makes these nanocellulose metamaterials interesting for use as coatings for solar cells, for which the combined set of properties may enhance device light absorption, making more electricity while also improving lifetime and efficiency by passive radiative cooling. Different colors are possible and, for buildings, there is the prospect of better solar cladding and maybe metamaterial-covered windows cooling passively.
To be precise, passive radiative cooling draws heat from surfaces and radiates it into space as infrared radiation to which the atmosphere is transparent. However, the energy density mismatch between solar irradiance and the low infrared radiation flux from a near-ambient-temperature surface requires materials that strongly emit thermal energy and barely absorb sunlight. The researchers embedded resonant polar dielectric microspheres randomly in a polymeric matrix, resulting in a metamaterial that is fully transparent to the solar spectrum while having an infrared emissivity greater than 0.93 across the atmospheric window.
The metamaterial consists of a visibly transparent polymer encapsulating randomly distributed silicon dioxide SiO2 microspheres. For those interested in the impending $40 billion market for transparent electronics, see the IDTechEx report "Transparent Electronics Materials, Applications, Markets 2021-2041".
When backed with a silver coating, the metamaterial shows a noontime radiative cooling power of 93 watts per square meter under direct sunshine. Further, the developers demonstrated high-throughput, economical roll-to-roll manufacturing of it - vital for promoting radiative cooling as a viable energy technology.
IDTechEx guides your strategic business decisions through its Research, Subscription and Consultancy products, helping you profit from emerging technologies. For more information, contact research@IDTechEx.com or visit www.IDTechEx.com.
PrintForwardTweetLikePinredditShare
Previous
Next