One of the best examples of a niche billion dollar and highly profitable market in RFID is that for animals, food and farming. In the IDTechEx research report "RFID for Animals, Food and Farming 2011-2021" (http://www.IDTechEx.com/animals) IDTechEx find that by 2021 the market will have increased 3.7 fold from $1.17 billion in 2011 to $4.09 billion.
It is and will be mainly a systems business throughout as shown below. Indeed, in some cases suppliers subsidise the cost of the tags, offering cheaper tags when they supply the complete system, which is where most of the margin is.
Animals, Food and Farming Systems value vs Tag value globally in 2021 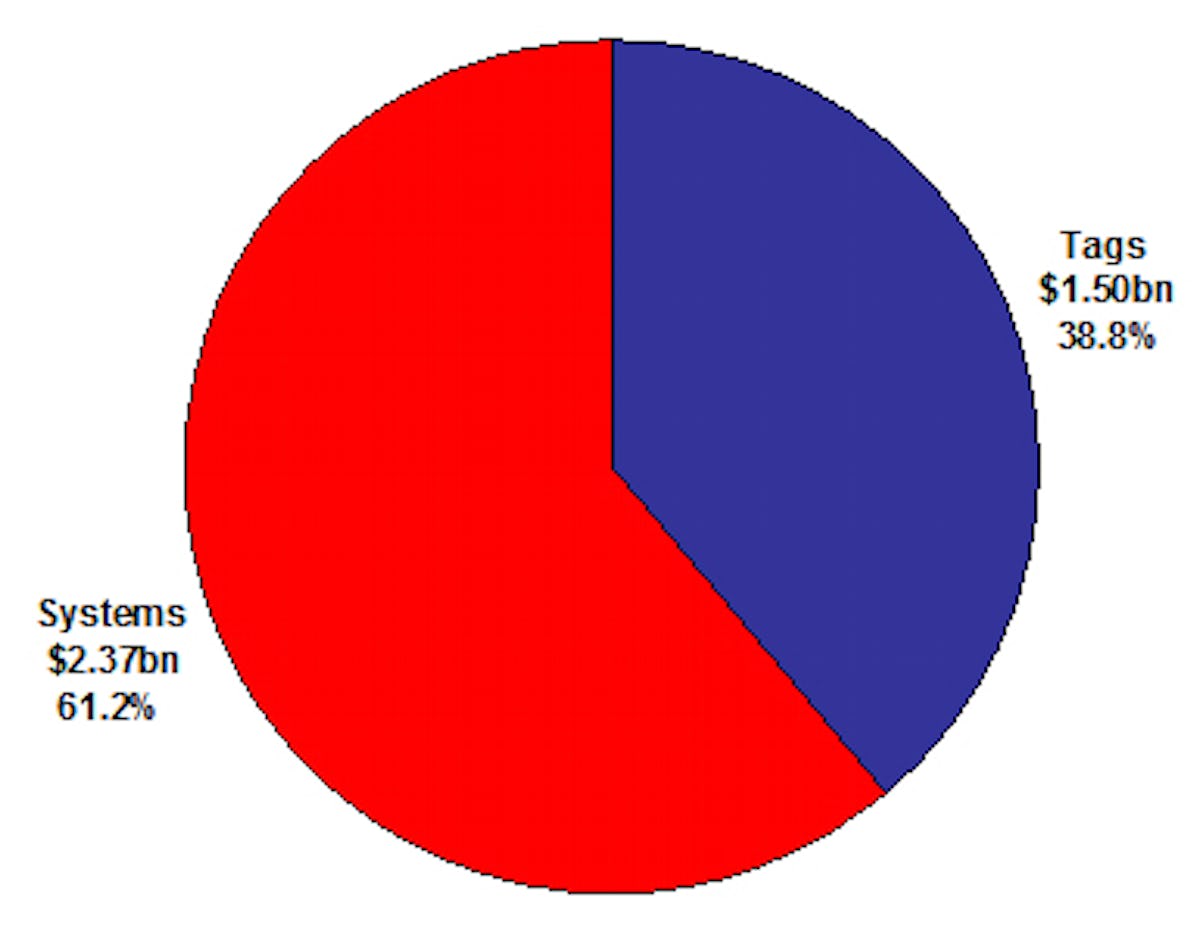 Already, the animals, food and farming part of this burgeoning market extends from tagging sturgeon in Canada, reindeer in Lapland, pandas in China, kangaroo meat in Australia and, by law, dogs in New Zealand and sheep and goats in Europe.
The reasons for the now rapid adoption of RFID in this sector embrace disease control, cost control, safety, crime prevention and improving customer service. Both the forward and reverse supply chains are involved. Planned legislation underpins future growth in these markets, as does the probability of more bioterrorism and accidental debasement of food but there are also the needs of racing pigeon enthusiasts in Germany and those selling premium food subject to counterfeiting. Swine flu, avian flu and hoof and mouth disease will not go away.

The tagging of livestock will be the largest part throughout, followed by the tagging of food. The market for RFID tags and infrastructure for animals, food and farming, rose strongly in 2010. This is due to European Commission (EC) laws operative from the beginning of the year that require sheep and goats to be RFID tagged primarily for disease control and Canadian legislation requiring cattle to be tagged. It is also due to broadening territorial and applicational adoption of RFID tagging of more types of animal, food and farming equipment and produce. Further growth is guaranteed when the EC requires cattle to be RFID tagged as well. The legislation will lead to a new European market for about 150 million tags yearly and millions of interrogators when all four legged livestock are covered. There are 70 million lambs slaughtered yearly in the EC for example. In 2011, New Zealand requires cattle and deer to be RFID tagged. Australia, Brazil and other countries are also legislating RFID.
Like most other profitable RFID business, this is government mandated, with the payback being prevention of disasters such as disease and contamination. For vendors involved this is usually a highly profitable business.

After livestock, the second largest sector in the categories is food. The USA has actually become more of a laggard in both animal and food RFID. Indeed, as one of the largest technology suppliers said to IDTechEx, "The USA has, if anything, been going backwards in food traceability." By contrast, outside the USA, local and national governments increasingly specify RFID for livestock disease control and they apply pressure for food traceability that is difficult to achieve without RFID. In many cases, Governments are even paying for RFID, for reasons of safety and efficiency, one example being the food for the Beijing Olympics in 2008. In January 2010, the new European Community regulations required sheep and goats to be tagged on all but the smallest farms.
However, the market is emerging and it will be substantial. IDTechEx believe that 1.6 billion tags will be used to tag food a decade from now.

Of the many uses for RFID, the food supply chain is set to rise dramatically. In due course, the tagging of individual items will attract the most investment, benefiting all in the supply chain but tagging of conveyances, pallets, cases, vehicles and equipment will also be important.

In 2011 Europe is 40% of the market of RFID for animals, food and farming. Ten years from now it will be a quarter of the market, as will North America, with East Asia being 35%. China, with by far the largest number of livestock and people to feed in the world, is the driving force of this change.

IDTechEx Report Focuses on the Opportunity

The IDTechEx report on the topic (http://www.IDTechEx.com/animals) concerns RFID in the food supply chain, from arable farming and livestock to presentation in the retail store. This package is designed to assist suppliers, users, legislators, researchers, investors and all others in the value chain. It gives a balanced view of successes and failures and which technologies and applications are most promising for the future and why. The activities of a large number of suppliers and users are described from countries all over the world, indeed in all the continents of the world. The forecasts for 2010-2020 cover numbers of tags, unit value and total market value, each for the categories livestock, food, pets, research & conservation, farming, each of these applicational areas being thoroughly analysed in separate chapters. For more information see http://www.IDTechEx.com/animals.
PrintForwardTweetLikePinredditShare
Previous
Next