Mar 20, 2020 Dr David Wyatt
Along with the rest of the automotive sector, the medium and heavy-duty truck market is evolving. Governments around the world, recognising the potentially catastrophic repercussions of unfettered climate change and witnessing the detrimental impact on human health from vehicle exhaust pollutant emissions in urban environments, are taking decisive action, that will, in the coming decades, drive vehicle manufacturers to zero on-road exhaust emission powertrain solutions. Consequently, the days of the fossil fuel powered combustion engine are numbered.
The IDTechEx Electric Trucks 2020-2030 report is designed to help businesses across the automotive value chain plan for the future in this rapidly changing market. The report provides 48 forecast lines for battery electric and fuel cell electric trucks, that include a ten-year outlook for vehicle production, market penetration and market value, with separate forecasts for both the medium and heavy-duty truck markets and regional segmentation for China, North America, Europe and ROW. The current status of the battery and fuel cell truck market is provided, with detail about each of the battery electric and fuel cell electric truck projects being undertaken by major players in the industry. The report presents background to developments in the electric truck market, including fuel cells and electric hybridization, along with discussion of key enabling technologies for electric truck deployment such as batteries, motors and charging infrastructure. 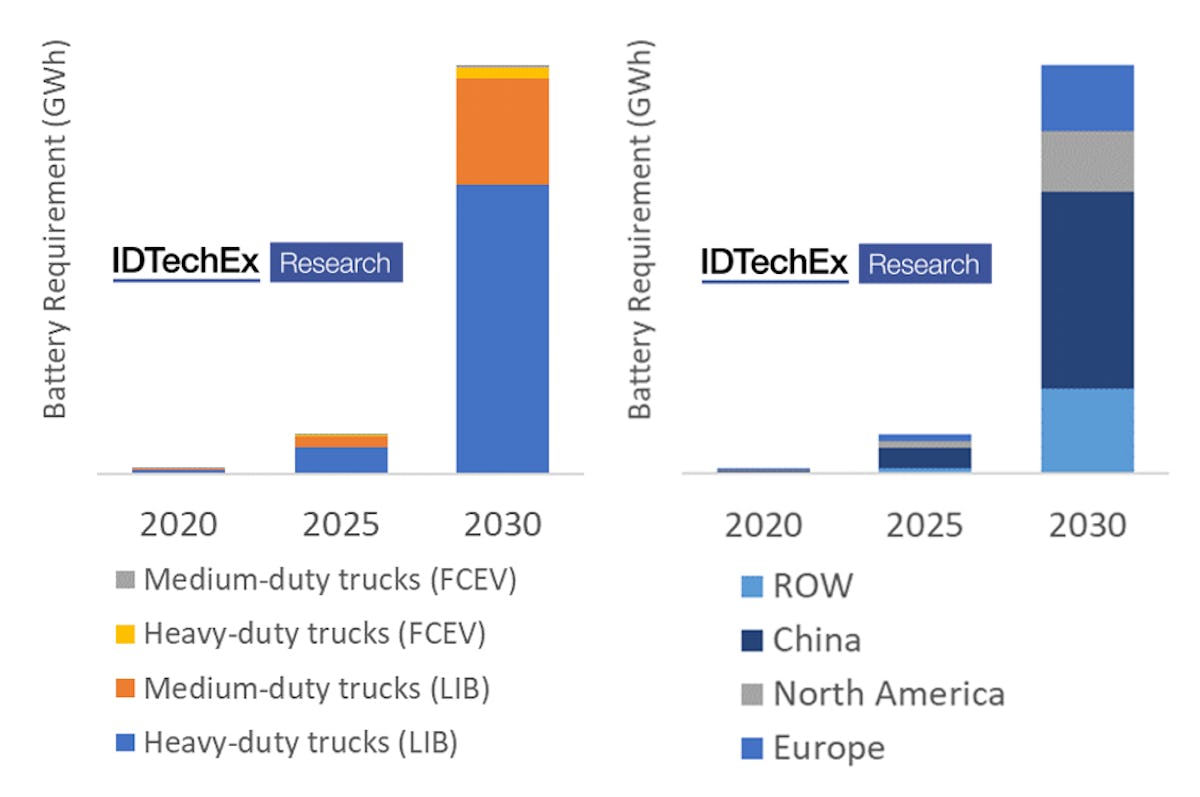 IDTechEx global medium and heavy-duty market battery requirement forecast 2020-2030 (GWh) Source: IDTechEx Electric Trucks 2020-2030
Despite medium and heavy duty trucks representing only 9% of the global vehicle stock, large inefficient diesel truck engines combined with high average annual mileage mean that the truck sector contributes 39% of the transport sectors' greenhouse gas emissions, which equates to about 5% of all global fossil fuel derived CO2 emission. It is this disproportionate contribution to emissions which makes trucks a target for governments. If the global community is going to meet its targets to reduce greenhouse gas emissions and limit the impact of climate change then it is clear that a rapid decarbonisation of the truck sector must be a priority.
Whilst CO2 emission has arguably been the main force driving move to zero on-road emission freight, an ever-increasing body of evidence is also highlighting the damage that poor air quality is having on populations which are frequently exposed to harmful levels of air pollution. In urban environments, that are in close proximity to congested road infrastructure, transport related emissions of, in particular, nitrogen oxides (NOx) and particulate matter (PM) have been directly linked to increased morbidity and mortality. A 2019 report by the International Council on Clean Transportation (ICCT) linked vehicle emissions to 385,000 premature deaths worldwide in 2015, with the cost of the health impacts from vehicle emissions calculated at approximately $1 trillion USD.
If efforts to encourage a significant reduction in average truck emissions prove ineffective in the near term, the emissions problem will be exacerbated by the expected growth in freight demand. Medium and heavy-duty trucks are an integral part of the freight transport industry, which is the backbone of major economies, as the movement of goods keeping business running. The rise of online shopping, the trend of increasing urbanisation and reducing personal car ownership are projected to increase the demand for home delivery and therefore increase the demand for freight and the commercial vehicles that facilitate that movement of goods.
Vehicle electrification offers a solution which effectively eliminates on-road exhaust emission and passes the pressure of decarbonisation on to electricity generation. Rather than monitoring the emission of millions of vehicles, the task then becomes one of governments managing the emission of a limited number of large power stations in combination with renewable sources, to reduce the carbon intensity of supplied electricity.
A majority of manufactures, including Tesla, Daimler, VW and Volvo are investing heavily in all-electric trucks, which appear to be winning the total cost of ownership battle against diesel by the end of the 2020s. A smaller minority, Toyota, Hyundai, and Nikola, have chosen to focus their efforts on fuel cell EV as the powertrain of the future, and despite issues with the efficiency of hydrogen as a fuel, FCEV remains in the conversation as a technology for long haul trucking applications, where a greater range is required, though the viability of this technology is dependent on the production cheap low carbon hydrogen. Chinese manufacturers are starting to produce electric trucks, leveraging their experience in electric buses and battery production. Given the Chinese governments strong support for the entire EV industry it likely that this is where the most significant deployment of EV trucks will be seen in the near future. IDTechEx forecast the penetration of electric trucks into the global medium and heavy duty market to be 9.4% by 2030.

Zero-emission medium and heavy-duty trucks by technology and production status. Source: IDTechEx Electric Trucks 2020-2030
In the short term a range of financial incentives for electric trucks in the form of subsidies and tax breaks will be necessary to offset the high initial capital investment required to purchase electric trucks. However, over the next decade, as tightening emission regulation forces diesel truck manufacturers to fit increasingly expensive emissions control devices, raising the cost of diesel trucks, and the cost of electric trucks decreases due to falling battery prices and economies of scale savings on the cost of electric components and vehicle manufacturing, the TCO balance swings in favour of electric trucks. By the end of the 2020s, with electric trucks produced in volume, the difference in initial capital investment will be offset by the fuel savings and maintenance over the lifetime of the truck.
An increasing number of cities and nations around the world are targeting a complete phase out of diesel and petrol as a fuelled vehicles on their roads. The electrification of truck fleets, especially those operating in urban environments, is likely to happen rapidly, once the cost benefit and ability of the technology to deliver the required daily duty cycles have been demonstrated.
Top image: Hyundai
PrintForwardTweetLikePinredditShare
Previous
Next