2013 7월19일 Dr Peter Harrop
The market for electric taxis will be a huge 345,000 vehicles in 2017, surpassing $10 billion in business as early as 2019 as forecasted by new IDTechEx research in its recently published report, Hybrid and Electric Buses and Taxis 2013-2023: Forecasts, Opportunities, Players. "The sheer variety of e-taxis across the world is one of the reasons why such statistics have been hidden in the past", says author Dr Peter Harrop of IDTechEx. "Another is that much of the action is in developing countries which are under-reported, given the obsession with pure electric cars in the developed countries, which, ironically, are a much less successful business."
E-taxis are mostly pure electric and they vary from fully custom vehicles to converted golf cars, commercial vans and regular cars often with minimal conversion. However, it is micro-EVs that provide the biggest volume and that is in China, India, The Philippines etc. For example, these can take the form of e-rickshaws in India, e-trikes in The Philippines and other enclosed three wheelers in Nepal. All these are much lower in cost than cars or specially designed taxis because they are not homologated as cars and they do not usually need crash testing and other expensive procedures and design enhancements. Indeed, in some countries the drivers of micro-EVs need no driving license or insurance. The Philippines has 3.5 million primitive taxis to convert to electric given the now severe pollution problems with internal combustion engines. International aid funding has led to the first commitment to replace 100,000 of them.
The total market for electric buses and taxis will multiply over 8 times in the next decade, approaching $60 billion not long after that. China will become by far the largest market for both electric buses and electric taxis. The buses will be designed exclusively for purpose, though some will have power trains used for trucks as well. The United States is currently the global leader in hybrid bus manufacture and so far has the largest markets, including New York City Transit, the world's largest hybrid transit bus fleet, and about one third of newly purchased large buses being hybrid. Europe and East Asia are catching up by also subsidising manufacture and use of green buses and imposing new regulations.
Figure 1: Number of electric taxis sold 2012-2017 in thousands 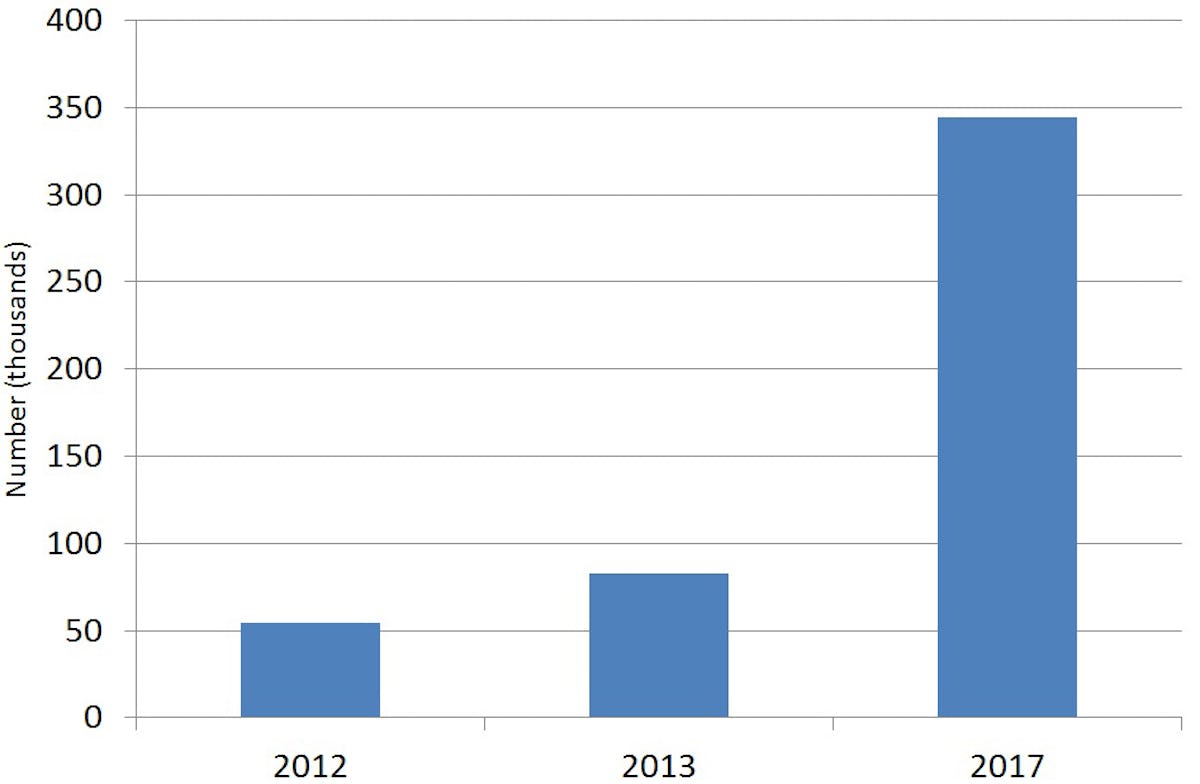 Source: IDTechEx report Hybrid and Electric Buses and Taxis 2013-2023: Forecasts, Opportunities, Players
Hybrid and Electric Buses and Taxis 2013-2023: Forecasts, Opportunities, Players is uniquely up to date and extremely thorough. It looks at the statistics and trends for conventional buses and taxis, the government incentives, paybacks and new technologies with detailed tables and figures to summarise the situation. The market forecasts cover units, unit prices and total market value 2013-2023, backed up by forecasts for the market for buses and taxis separately. The whole is put in the context of statistics for past sales and production output by manufacturer and forecasts for the electric vehicle market as a whole. The leading suppliers are identified and transmission manufacturers are compared using sectioned technical diagrams.
PrintForwardTweetLikePinredditShare
Previous
Next