2015 11월13일
True to its name, the IDTechEx report, Autonomous Vehicles Land, Water, Air 2015-2035 gives the full picture. Here we share some of the latest entries as it is continuously updated to reflect the rapid progress in this sector.

Autonomous tractors were among the first autonomous vehicles by land, water or air but only now are they starting to be sold in volume. Current driverless tractor technologies build on recent developments in hybrid powertrains - more controllable and environmental - other autonomous vehicles and new agricultural technology. The idea of a versatile, programmable driverless tractor emerged in 2011 and 2012 out of "follow me" technology.
Autonomous Tractor Corporation (ATC), that designed Spirit, the prototype tractor that the company says is the first truly autonomous farm tractor, offered a hybridisation retrofit kit for tractors in 2015. It just sold the first of these drivetrain packages to FarmilyFarms Group, a farm business consulting group headquartered near St. Louis, Mo. The sale is a big move for two reasons: 1) FamilyFarm Group's clients, who are farmers, represent more than 1.5 million acres of row crop production throughout North America, and 2) the electric drivetrain is the enabling technology behind making tractors capable of autonomous control.
"I wanted to let you know that (through this the sale of the drivetrain package) ATC took its first commercial steps in putting truly autonomous tractors (meaning no driver, not driver-assistance) into farmers' hands to help with their field work," says ATC's CEO Kraig Schulz in an email to Farm Industry News. "While Tesla, Google and others are rapidly transforming the automotive market with electric and autonomous technology ATC is the first company to bring this technology to the farm."
ATC is taking additional orders for its drivetrain now. "We've also launched a fundraising campaign on AgFunder, so any accredited investor nationwide can invest in our company," Shulz says. The arguments are very compelling if the affordability and reliability can be demonstrated.
"When we first started building, the aim was to create a diesel-electric tractor that was reliable and could be repaired with inexpensive, unspecialized tools. After talking to farmers, a bigger picture emerged. Labor shortages were also a real problem that would not be going away. Tractors ultimately needed to drive themselves. So we built solutions for both." says Kraig Schulz, President & CEO. The company argues, "In the future, tractors will be small, autonomous vehicles that can perform field work 24 hours a day, caring better for the soil and crops, and reducing labor pressures on the farm. Autonomous Tractor Corporation (ATC) has completed the first ground-up redesign of the tractor in almost 80 years in order to make that future a reality, today."
"The Company has developed the only diesel-electric drivetrain (generator, engine, wheel motors) for tractors on the market. On top of this diesel-electric platform, it built a brand new in-field navigation system that makes tractors truly autonomous - no person required - for the first time. Similar to Tesla and Google in the car industry, ATC started with an electric platform and then built autonomous capabilities on top of that system."
"ATC has sold its first eDrive system to FamilyFarms Group, one of the largest family cooperatives in the midwest, and is ready to ship its product in Q4 2015. It's autonomous hardware technology, AutoDrive, is fully developed and software ships in Q2 2016. Together, these technologies will enable fleets of smaller, cheaper, more efficient and environmentally-friendly tractors to work the fields that will help provide the food we need to serve the world's growing population for years to come".
The company summarises, "ATC's technology helps address several significant issues in modern agriculture."

ATC has developed two primary complementary technologies that solve a host of the problems above.

The eDrive system allows farmers to retro-fit their existing tractors with diesel-electric technology using off-the shelf diesel generator sets and ATC's patented wheel motors. Inevitably, older model tractors will have mechanical issues that are often cost-prohibitive to repair. eDrive addresses this problem, making tractors far simpler and easier to repair, more durable and approximately 25% more fuel efficient (Company estimates). eDrive motors come in 5hp, 25hp and 100hp versions to address farmers' needs for various horsepower vehicles. They are used in pairs and can power a 2WD or 4WD vehicle. The motors are liquid cooled and totally sealed, making them ideal for use in unforgiving field conditions with mud, dust and high temperatures. ATC's proprietary variable frequency drive (VFD) is designed to provide up to 4 times the rated continuous use horsepower for short intervals, giving eDrive enormous torque for start-up or situations when power is directed to one motor when the other wheels may not have traction (Company estimates).
ATC is taking orders for eDrive today and the first vehicles are in the field for use in Q4 2015. A complete eDrive retrofit will cost the farmer approximately half of what a new tractor would cost. Mean time to repair an eDrive tractor is less than 2 hours and the service life is designed for approximately 25,000 hours - about 50% longer than today's tractors (Company estimates). Retail cost is currently set at $15,000 each. ATC's second product is a navigation, safety and implement management system called AutoDriveTM that enables existing tractors to be truly fail-safe and autonomous - no driver required and not reliant on GPS.
One of the keys to navigating a driverless vehicle is having immaculate navigation data - and GPS is not reliable or accurate enough in mobile applications to serve this function on its own. To address the issues with GPS, the company developed and patented its LRNS (Laser-Radio Navigation System) technology. LRNS incorporates multiple sensors that allow for independent cross-validation of all the data needed to safely move a tractor in a field while performing complex tasks without a driver. All of the LRNS data is obtained through in-field sensors so that the data is not affected by signal fade or reflections and is essentially real-time, with updates happening every 1/10th of a second.
AutoDrive can do essentially anything it is trained to do, but since every field, implement, tractor and operation is different, ATC is releasing a series of application packages over time. The first package is for tilling and is in final testing and ready Spring 2016. Subsequent autonomous packages include: shuttling a grain cart to and from the combine and truck (tested, second application), manure spreading, spraying, land leveling, planting.
Another key to successful autonomous operations is implement management. Using ATC's technology the farmer can "train" the tractor and the implement to do exactly what he/she wants done even in complex field conditions: simply show the tractor and implement what you want done for a given application in a given field and it will replicate and extrapolate the training reliably and accurately. The system eases the farmer out of the cab in small steps, while allowing him or her to re-take control of the tractor at any time.
AutoDrive costs about the same as today's auto-steer systems that still require a driver to be in the cab at all times. AutoDrive is currently designed to work with eDrive but, as with auto-steer systems today, will be adapted to other manufacturers' tractors over time. AutoDrive will ship in the Spring of 2016 with the first set of applications focused on tillage.
The Future of Farming - together, AutoDrive and eDrive enable the next generation of tractors - smaller, lighter, repairable, autonomous vehicles that put much greater control of costs and operations back in the hands of farmers. We envision the same revolution in ag equipment that happened at the turn of the century when enormous steam tractors with 10 or more operators were replaced with smaller, more efficient internal combustion engines tractors. ATC's technology helps solve the looming issues that farmers face - ground compaction, control of chemically-resistant weeds and the shortage of qualified labor.
Target Customers - Initially, ATC is targeting medium-sized and larger farmers (2,000 acres or more) with 100hp or larger tractors that are out of warranty and are approaching the time that repair costs become burdensome for the farmer (approximately 5,000 to 8,000 hours). There are more than 1 million tractors in use globally today that fit ATC's target profile (estimates based on USDA Census of Agriculture, Agrievolution). With an initial focus on the US, Brazil and Europe, the stock of these tractors initially targeted by ATC is approximately 450,000.
Sales, distribution, installation, training and support - ATC will not build its own distribution, sales or end-user support infrastructure. The team is already talking to several partners who have global footprints, customer relationships and the infrastructure necessary to commercialize ATC products. ATC will train its partners on the install process and support them as they train the farmers on how to use the new equipment. Revenue Model - ATC will sell its products to distributors or license its technology to partners once the products are demonstrated and viable for manufacturing. ATC's gross margins are approximately 50% wholesale. 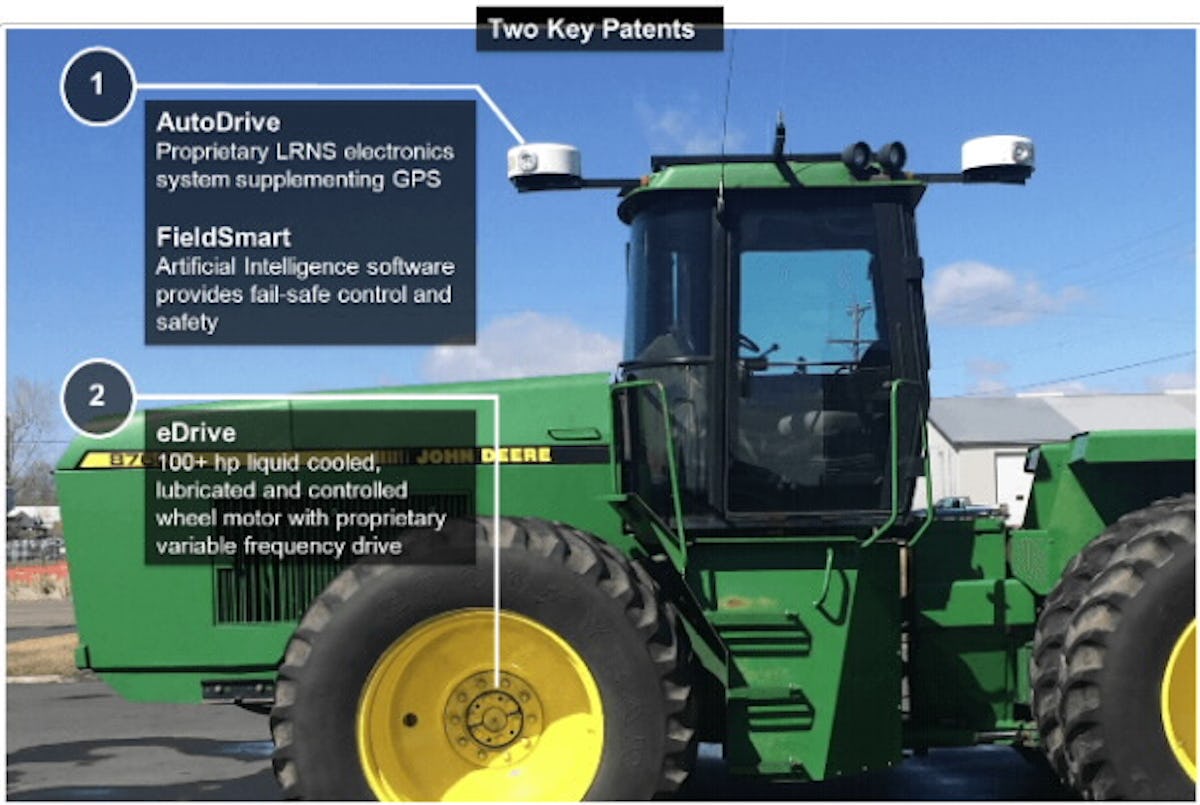 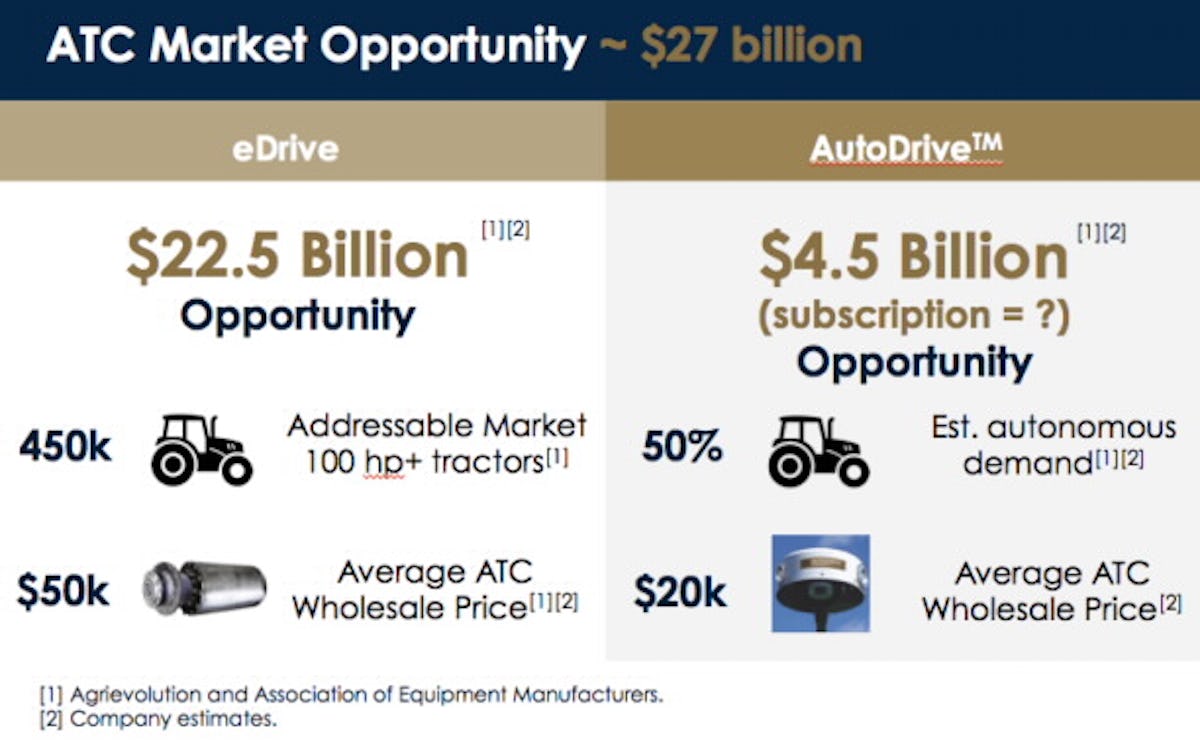 There are no similar hybrid or diesel-electric products like eDrive in the agricultural equipment marketplace. All other manufacturers are focused on the over-the road transport market. eDrive has many advantages that will keep it ahead of potentially encroaching competition.
ATC retrofit competitor assessment in 2015 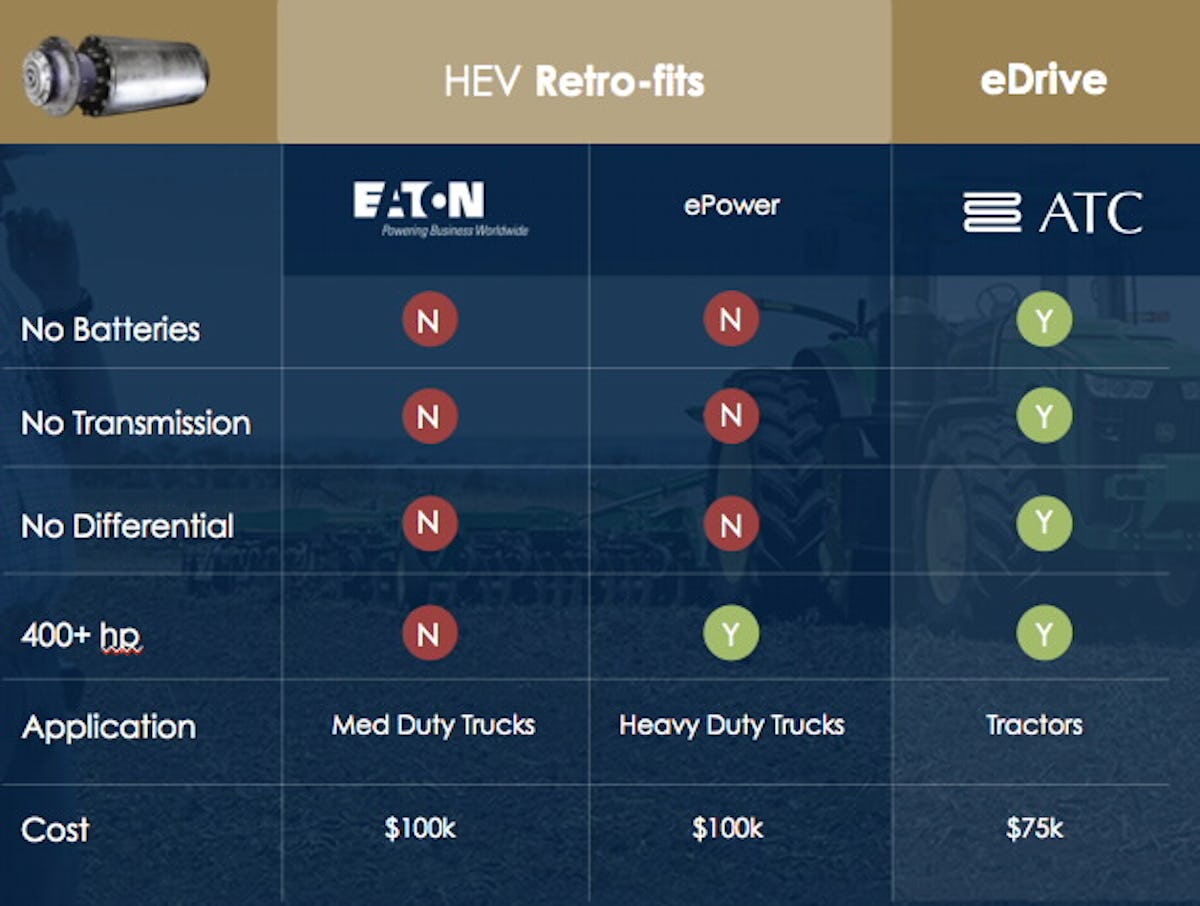 The auto-steer technology of today is comparable to AutoDrive only in that they provide navigation data and steer the tractor. The auto-steer technology still relies on GPS data - and a driver MUST be present at all times, having to take control of the tractor or implement frequently when the GPS signal is not available or during headland turns or other more complex maneuvers. The closest technology to AutoDrive is the Google self-driving car. However, navigating highways is a far different challenge than navigating a field while hauling an implement. Both are difficult, but we see driver-less cabs in the field happening first, and ATC has first tracks in the ground.
ATC assessment of competitors' technology in 2015 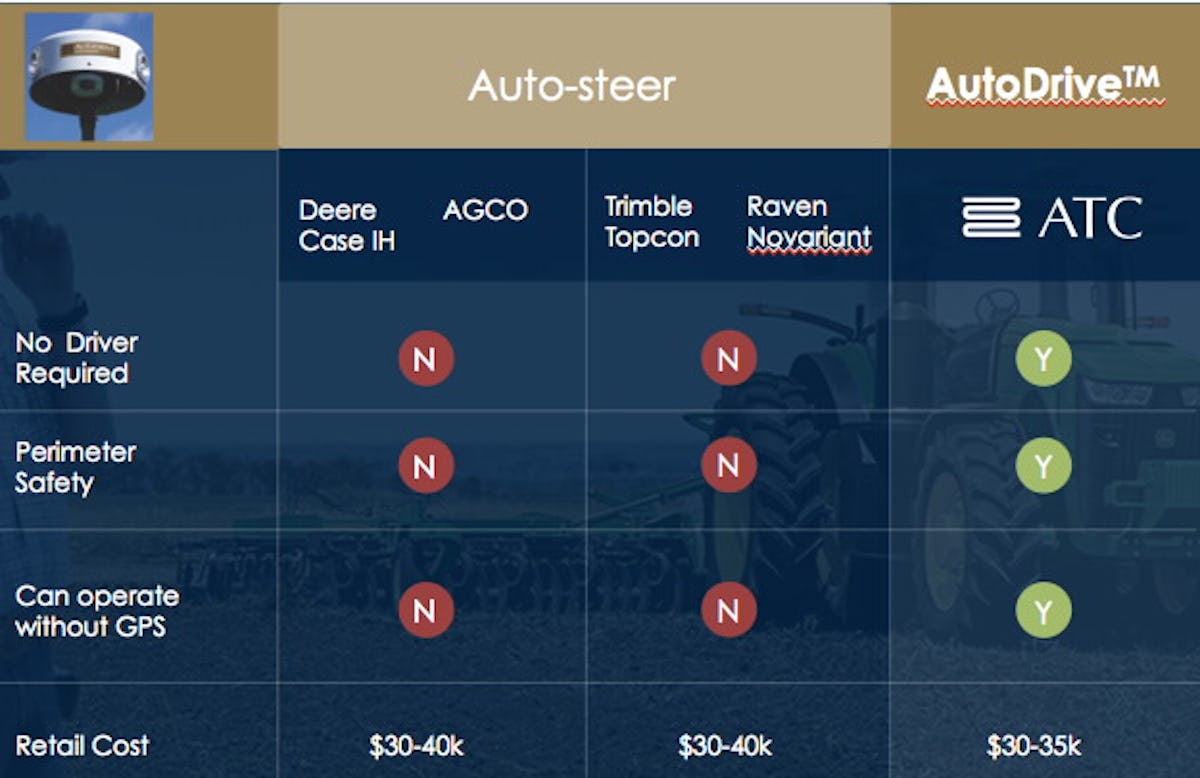 "The Spirit is ATC's proprietary tractor platform and prototype is operable and autonomous today. It is fully diesel-electric (no transmission, differential or axels) and autonomous - no cab. The innovative design will cost approximately half of a comparably-powered traditional tractor and have a significantly lighter footprint. With the ability to mount implements on the front, middle and back of the platform it can multi-task in ways that a traditional tractor cannot. Imagine an alfalfa combine that can mow, dry and bale alfalfa in one pass...this is the future." Source ATC.
Earlier, FEMA reported on Kienze Manufacturing preparing an autonomous tractor for market based on the more expensive LIDAR used in autonomous car trials and in the successful Komatsu giant mining trucks that are autonomous but this has not yet achieved market success. Tractors are more price sensitive than giant mining vehicles of course - the US tractor market is around 170,000 vehicles yearly - and truly autonomous cars are far too expensive to succeed as yet, the LIDAR being a key part of that expense. It is shown below.
Kienze autonomous tractor concept in 2011 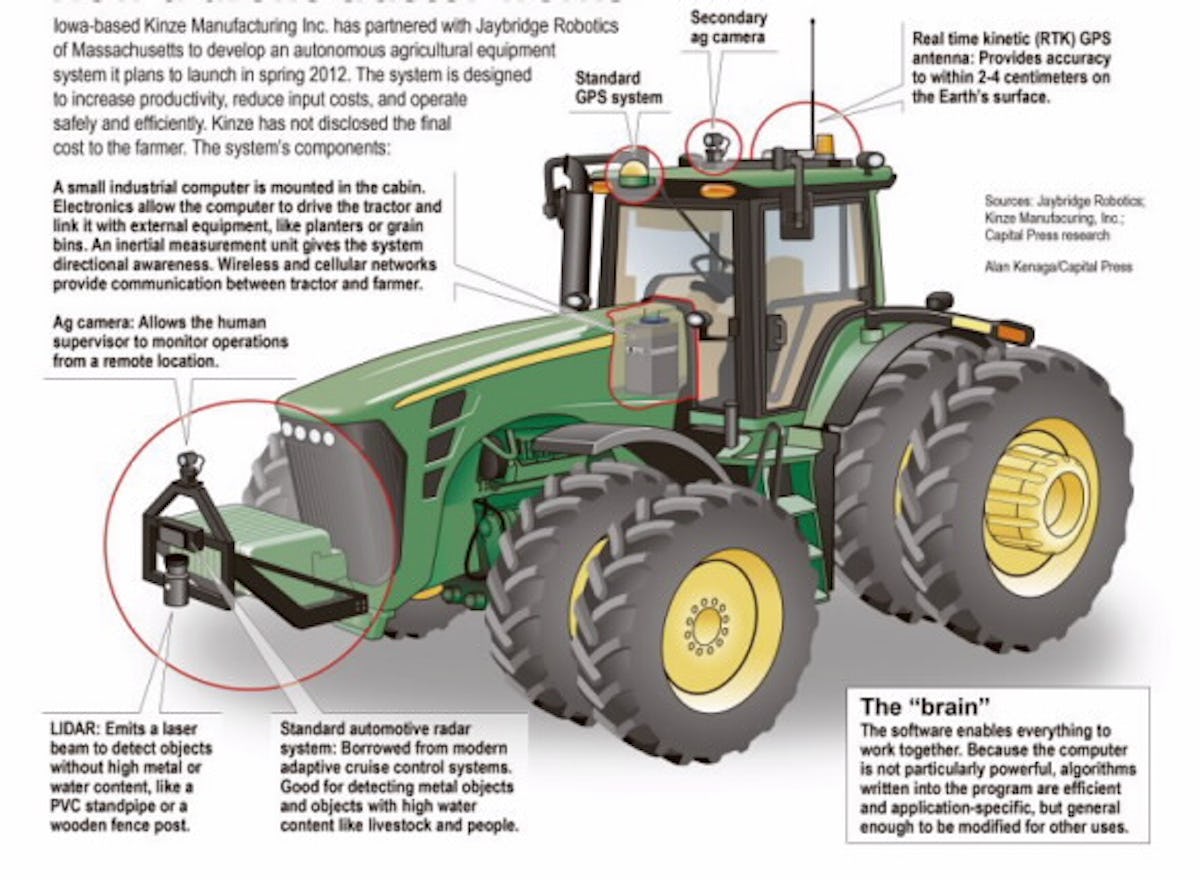