2015 5월21일 Dr Xiaoxi He
Not only will the use of RFID in China become a $4.3 billion market in 2025, but that figure will almost double if we include the value of tags and readers made in the country and exported elsewhere. Already in 2014 China had 85% of the global manufacture capacity of RFID tags, with over 150 RFID companies operating in the country.
In this new report titled RFID in China 2015-2025, IDTechEx provide a full study and assessment of the prospects of the RFID market in China. The research was carried out by IDTechEx analyst Dr Xiaoxi He based on interviews conducted in China in addition to the full knowledgebase of RFID market and business intelligence from IDTechEx led by Raghu Das, achieved over 15 years of studying the entire RFID market.

The development of RFID is heavily supported by the Chinese government. Indeed, the Chinese RFID market can be divided into two separate types: government-led and market-oriented. The supplying companies are correspondingly separated into two types as well. AISINO, Shanghai China Card, CEC Huada Electronic Design are companies focusing on government projects and are strongly influenced by the government support. While companies such as Invengo, Arizon RFID, Hangzhou Century have less government influence and are more market-oriented.
IDTechEx have found that most government-led companies are also state-owned companies. They mainly focus on the Chinese market, they have a large amount of capital, are given more opportunities and are enjoying high profit margins because the government projects are less cost-sensitive. Those companies also play an important role in projects such as national ID cards, passports and subway ticket applications. The entry barrier is high for those applications, as the suppliers need to have good government connections and relatively mature technologies. On the other hand, the market-oriented companies are facing a more competitive environment, especially in the tag-assembly sector. In 2015 the market segments for RFID in China are as follows: 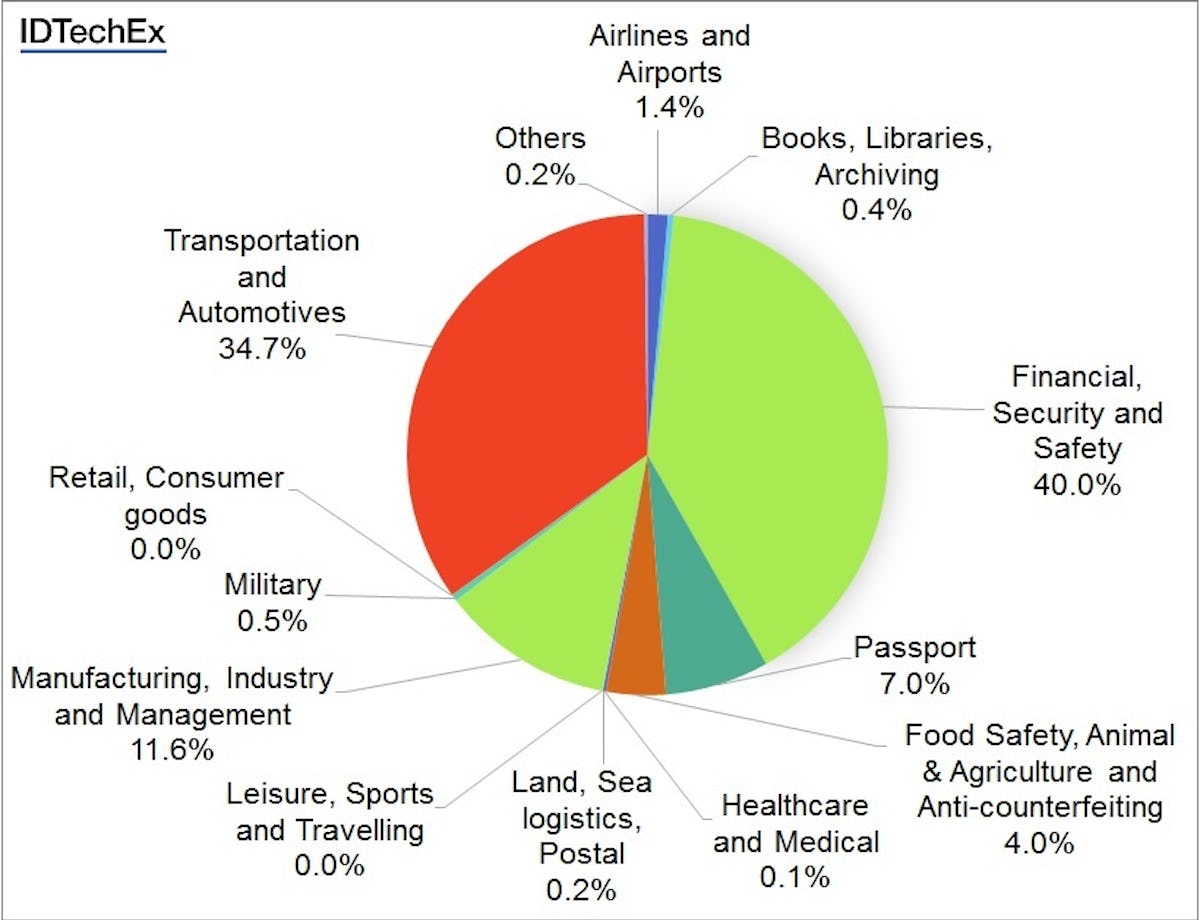 As RFID is increasingly being deployed around the world (IDTechEx expect that over 8.5 billion tags will be sold globally in 2015 versus 7 billion in 2014), suppliers are in the process of shaving off fractions of a cent from each inlay, particularly for passive UHF. That means picking up and moving manufacturing base to China in some cases. There have also been other, relatively new entrants that by strong investment (including acquisition) have gained a relatively high market share from nothing in a few years, examples being Arizon RFID and Shangyang, to name a few.
More Chinese inlay makers are emerging and equipment providers report that sales to China are strong. In our research, IDTechEx found that China had a manufacturing capability of 6 billion RFID tags annually in 2014, more than 85% of the total global RFID tag production capability that year.

HF RFID was developed early in China due to the government's national ID scheme and the technology and markets are mature. A complete value chain has been formed. A large number of applications such as transit card, national ID card and electronic passport use HF technology. In 2015, IDTechEx expect that the HF market value takes more than 80% among all RFID frequency bands in China.
UHF technology, widely used internationally, however, falls behind in China, especially in the chip design/manufacturing. Therefore, UHF chip design/manufacturing development has been listed as one of the priorities in China's IoT development. The table below shows the projects supported by Chinese government and corresponding companies working on UHF chips.

Source: IDTechEx
These are among a few of the Chinese RFID companies that IDTechEx has reported on in RFID in China 2015-2025. More than 150 companies are categorized by value chain positions and specialized frequencies and of those over 110 are closely assessed. The report gives a detailed analysis on the RFID value chain in China across all the main frequency types and ten year forecasts for the use of RFID in China by 13 application categories. It also covers the RFID development in key areas including:
The research was conducted based on face-to-face or telephone interviews, secondary research on online resources, company annual reports, IDTechEx's database and other resources. RFID companies and RFID adopters will find great value when they are looking for partnership, trying to understand what is really going on in China or making strategic decisions in RFID. Learn more at www.IDTechEx.com/China.
PrintForwardTweetLikePinredditShare
Previous
Next