2016 5월27일 Dr Peter Harrop
IDTechEx has studied the biggest application of lead acid batteries - in cars - and finds that C category cars and above will have to be mild hybrids with 48V lithium-ion batteries and no lead acid batteries if they are to meet the tough new carbon dioxide emissions in 2025 and 2030 and exhibit up to four pure electric modes and enhanced performance to keep customers satisfied. That involves major electrification handling up to 20kW and a 1kWh battery by then. See the IDTechEx report Mild Hybrid 48V Vehicles 2016-2031. Mild hybridisation at 48V (at minimum adding torque assist ie electrical boost function so engine can be downsized up to 60% and efficient regenerative braking) will push lead acid sales into sharp decline despite some of the B category being 48V mild hybrids by then with advanced lead acid.
Fighting a rearguard action are a number of advances such as the one below which does not address the poor energy density and may or may not give life comparable to Li-ion but useful nonetheless. However we find most major automakers negative about PbA as they think it has a bad name, is not future proof and may be banned though it is cheap upfront. In China and many other countries serious poisoning from uncontrolled disposal of PbA batteries and from lead smelting continues. The following text is from the TUBALL developers.The proposed use of carbon nanotubes adds cost.
"TUBALL single wall carbon nanotubes (SWCNT) into lead acid batteries can increase the batteries' cycle life fourfold and double capacity at high rates. This groundbreaking research result is set to significantly expand the range of applications for lead acid batteries.
Lead acid batteries comprise more than 60% of the total global battery market. They are extensively used in cars, trucks and buses, micro-hybrids, stationary power back-up and UPS systems, heavy equipment and other fields. The key advantages of lead acid batteries are consistent performance, excellent low temperature performance and a strong safety record. However, issues with existing lead acid batteries include a poor charge acceptance as well as a limited cycle life at high depth of discharge, i.e. when they are fully charged and discharged.
The May issue of the Journal of The Electrochemical Society features a study published by Bar-Ilan University, one of the most prominent research institutes in the energy field and Professor Doron Aurbach, which shows the effects of adding 0.01% SWCNT into lead acid battery electrodes. For the purposes of this study, the research team used TUBALL BATT, a water-based dispersion of high quality SWCNT for energy applications, manufactured by OCSiAl, the global single wall carbon nanotubes manufacturer. The dispersion was added into electrode pastes during standard battery manufacturing process.
The use of TUBALL as opposed to regular electrodes or electrodes containing multi wall carbon nanotubes (MWCNT) showed a significant increase in capacity of 30%. The cells also demonstrated double the capacity at high discharge rates. The most significant results of the study were drastically improved charge acceptance and cycle life of the new cells. TUBALL increases the lifetime of lead acid batteries by 4.5 times in comparison with standard commonly used electrodes. The effect was attributed to a drastic decrease in sulfation, as well as high conductivity and mechanical reinforcement of electrodes structure with the added nanotubes. 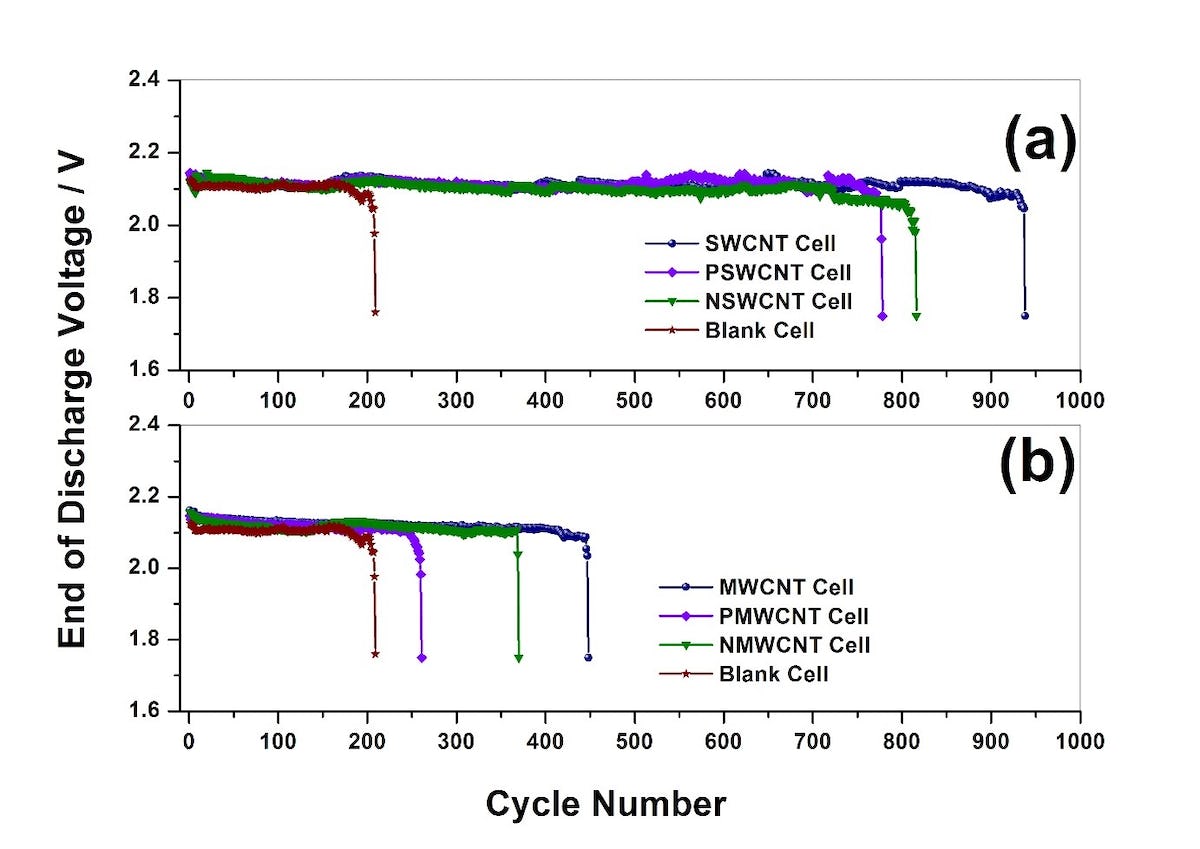 These results will enable lead acid batteries to be used in applications where deep discharge and faster charge and discharge rates are common, increasing their competitiveness against other battery chemistries. TUBALL BATT water-based SWCNT dispersions are available commercially worldwide from OCSiAl's manufacturing partners".
PrintForwardTweetLikePinredditShare
Previous
Next