2016 5월25일 Dr Guillaume Chansin
IDTechEx Research has just released new forecasts for the OLED display market. OLED is an emissive display technology which is gaining significant market share against liquid crystal displays (LCD). OLED was initially adopted in mobile phones but can now be found in tablets, TVs, and wearables. This latest IDTechEx Research report says the whole OLED displays market will reach nearly $16bn this year and will grow to $57bn in 2026. With the plastic and flexible sector being $2bn this year and reaching $18bn in 2020.
The two main manufacturers of OLED displays have both announced large investment to expand their production capacities. Samsung Display has plans to spend more than $3bn between 2015 and 2017 to build a new production line. Their rival LG Display is trying to lead the industry by committing over $9bn for two new manufacturing plants.
OLED displays that are manufactured on flexible substrates have been successfully introduced on the market, featuring in consumer devices such as the Samsung Galaxy S7 Edge or the Apple Watch. Compared to conventional glass-based displays, plastic OLED displays are much thinner and lighter, enabling slimmer devices or bigger batteries. Future flexible displays will also make foldable mobile devices a reality.
The rise of plastic and flexible displays is the most important trend in the industry and is offering opportunities in the supply chain. Recently, Kateeva raised another $88m to accelerate their growth. The company supplies the mass production equipment to deposit thin film encapsulation on flexible OLED displays. All the new investors are located in China and include BOE and TCL Capital.
We now expect the market for plastic and flexible OLED displays will reach $18 billion by 2020. The two main segments are currently smart phones and smart watches. Once the technology becomes more mature it will be possible to see larger sizes and applications in automotive displays. 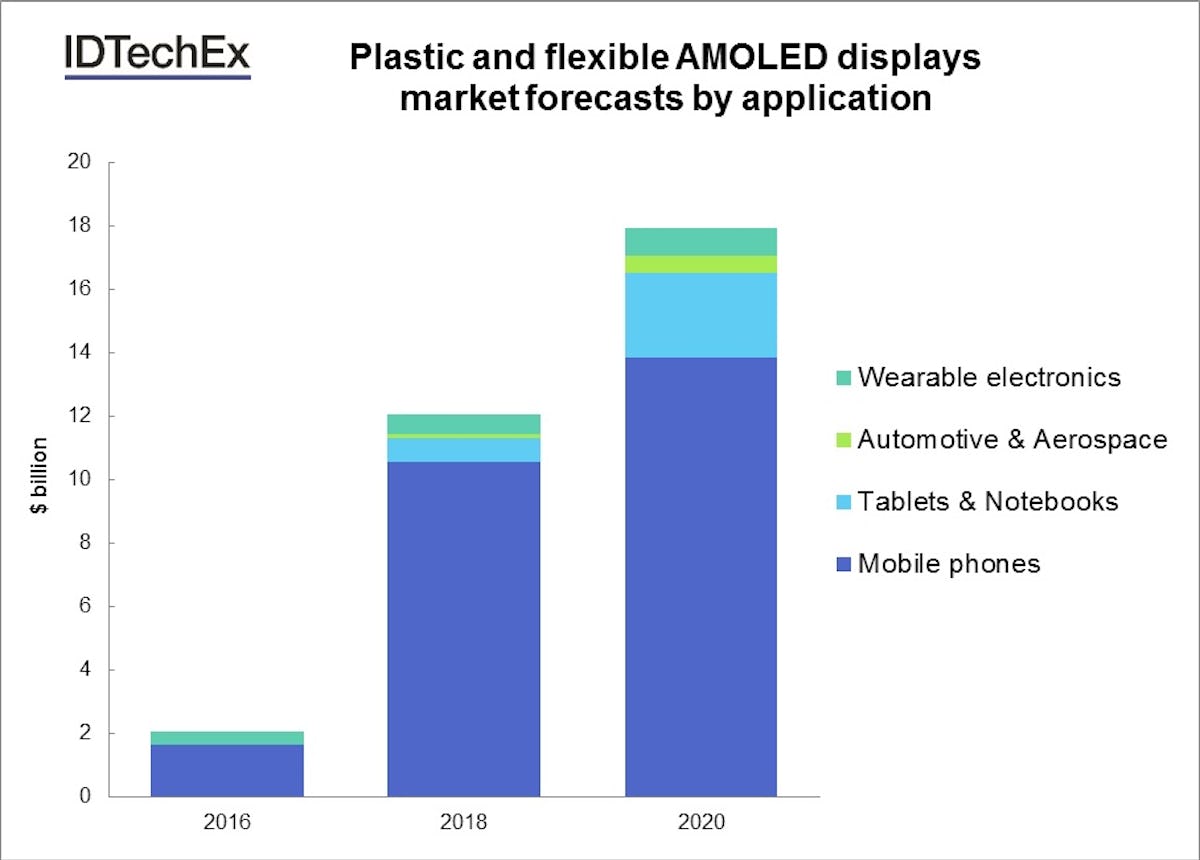 Source: IDTechEx Research
New applications in wearable devices such as augmented reality (AR) and virtual reality (VR) are also coming to market and provide new opportunities for suppliers of OLED displays. Sony, Oculus, and HTC have already announced new VR headsets based on OLED. In AR glasses, OLED microdisplays could replace LCoS (liquid crystal on silicon) as the main display technology.
IDTechEx will be at SID Display Week (booth #606) in San Francisco to present their research on OLED and other technologies such as quantum dots, wearables, and printed electronics. During the event, we will be speaking in the Symposium and in the Exhibitor's Forum.

About this IDTechEx report

The report OLED Display Forecasts 2016-2026: The Rise of Plastic and Flexible Displays gives a unique perspective on the OLED display market, leveraging the full expertise of our analysts and the direct interviews with companies in the value chain.
Based on a deep understanding of the technology roadmap and the existing bottlenecks, IDTechEx has forecasted the OLED display market in eight segments:
This report includes:
Learn more at www.IDTechEx.com/displays
PrintForwardTweetLikePinredditShare
Previous
Next