2016 4월26일 Dr Peter Harrop
The new IDTechEx report, Future Powertrains 2016-2031 concerns the twenty year future of powertrains for land vehicles, including reference to water and airborne vehicles as appropriate. The primary emphasis is on the most important applications by market value - cars and buses - and the most important powertrain types by value potential but most of this analysis is directly applicable to most other vehicles. The research for this report took place mainly in 2016 and embraced interviews, events and visits in three continents as well as interpretation by PhD level analysts with up to 25 years' experience of the subject.
The main finding is that beyond the traditional internal combustion engine, the most important future powertrains are:
1. Its derivative the 48V mild hybrid, mainly because it is a low cost incremental way of upgrading existing powertrains to meet onerous 2025 and 2030 emissions legislation. Window of opportunity 2017 to about 2031.
2. Plug-in strong hybrid giving tens of km of pure electric range and greener credentials. Popularity is partly because it is a transition product to pure electric for those with range anxiety and those intolerant of long charging times on a long journey. Window of opportunity to about 2026.
3. Pure electric, the end game with zero pollution at point of use and often best performance. An important subset of this is the Energy Independent Vehicle EIV, a topic that came up several times at the recent AVERE e-mobility conference in Amsterdam. That will come centre stage within five years. The term refers to vehicles that get all their electricity for traction and hotel facilities from ambient energy using on-board equipment. For example, a Japanese aircraft has recently demonstrated the propeller going backwards in thermals and during descent to produce large amounts of electricity and the Australian Immortus project will lead to cars with a high "perpetual" speed in daylight. You can even buy a Chinese minibus with no battery that travels continuously in daylight at more than walking speed thanks to an exceptionally efficient powertrain with state-of-the-art photovoltaics.

The nature of future powertrains is changing in configuration and scope, including new high power functions such as active suspension and accepting multiple energy harvesting including many new forms of electrical regeneration. A host of new components is arriving such as starter torque assist reversing alternators becoming capable of direct drive as well, solid state batteries, supercapacitors and GaN and SiC power semiconductors. They are disruptively changing the whole powertrain. In parallel, mechanical, electrical and electronic components are merging, radically altering the value chain and the report explains all this with technology roadmaps and forecasts of numbers for 15 years ahead.
Scenarios are given for where cars will be in the years ahead - a complex situation when it comes to powertrains but shaking out at 10-15 years from now.

48V mild hybrids have big potential in the view of IDTechEx and most motor manufacturers interviewed but the Tesla runaway success with Tesla 3 confirms the IDTechEx view that not only are pure electric vehicles the end game, the end may come quite suddenly. For example, imagine a day when people fear that the resale price of the internal combustion engined vehicle they are thinking of buying may collapse and they virtually have to give it away. No matter whether it is true or not under new pollution laws, just the sentiment could collapse the market. IDTechEx pitches for that sort of thing happening in 10-15 years from now as shown in the graph for mild hybrid cars in blue and conventional cars in brown respectively. The technology evolution behind this is roadmapped in detail because 48V mild hybrids start off in 20127 as not being electric vehicles at all, only torque boosted conventional vehicles with efficient regenerative braking but they evolve to be a much lower cost way of doing almost everything a strong hybrid does when in a form that does not plug in. Goodbye traditional Prius. 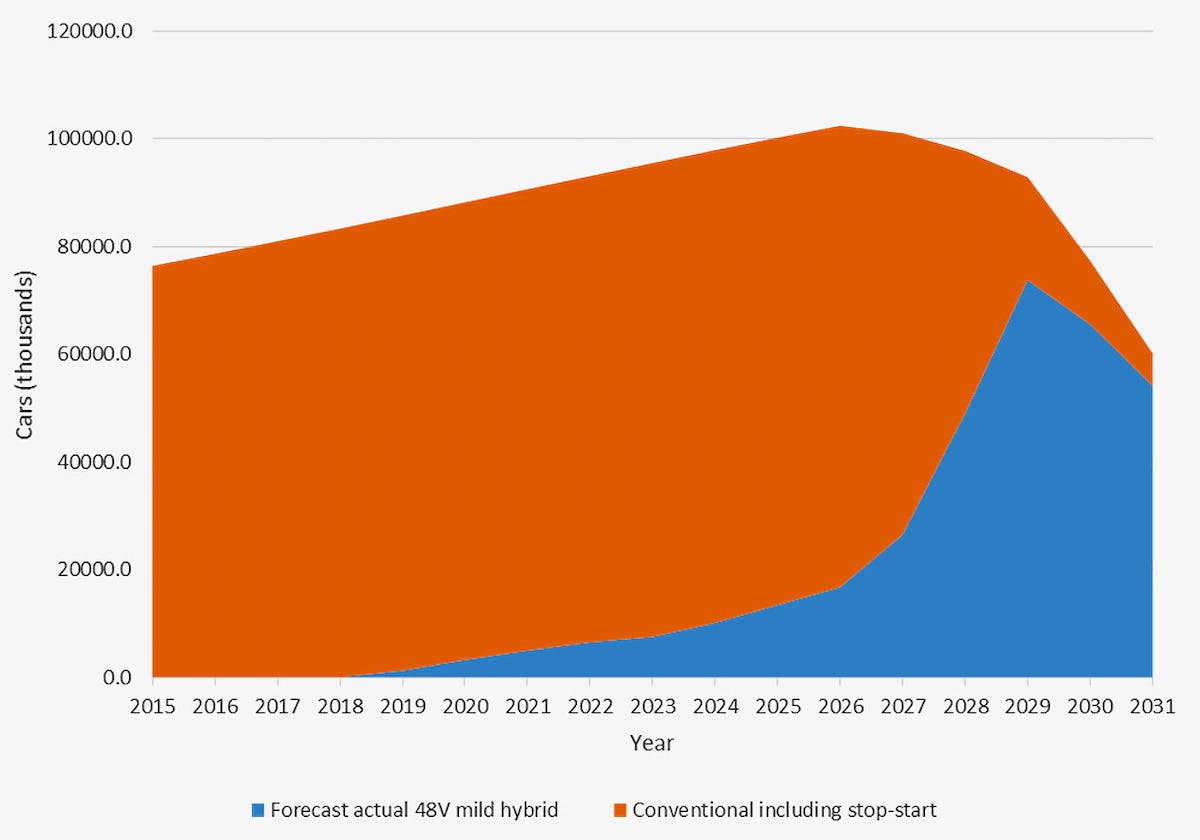