2009 1월14일 Dr Peter Harrop
This article shares some of the research carried out for the new IDTechEx report "Energy Harvesting and Storage for Electronic Devices 2009-2019".
Energy harvesting (EH) is also known as power harvesting or energy scavenging. It is the process by which ambient energy is captured, converted into electricity and used to drive small autonomous electronic, electrical and combined devices. About 500 organisations are developing or applying energy harvesting other than photovoltaics and, in addition, most of the 650 organisations developing the new photovoltaics beyond conventional silicon have energy harvesting in their sights.
Some forms have been around for some time such as bicycle dynamos, a form of electrodynamics, and solar cells - photovoltaics - on satellites. Now, as a much broader range of energy harvesting products hit the marketplace, we can move from the technical minutiae to commercial considerations such as paybacks. For example, virtually all space vehicles now being launched employ gallium arsenide, germanium and other thin films together in the photovoltaics to obtain greater efficiency than conventional silicon photovoltaics can achieve. The greater efficiency and thin film construction mean less weight and size permitting reduced launch costs or additional payloads in a satellite, for example. Boeing Spectrolab is the main supplier. However, down on earth, many other paybacks are being enjoyed.
Choices
First let us look at the choices. Electrodynamics (potentially printed), piezoelectrics (sometimes printed), photovoltaics (increasingly printed) and thermoelectrics (sometimes thin film) are the most popular forms of energy harvesting because they offer the best compromises of small size expressed as energy per cubic volume, ability to convert modest inputs into electricity (expressed as efficiency %), cost per watt and life.
For example, from the huge temperature differences in engines, vehicle exhausts and aircraft, thermoelectrics from Micropelt, High Merit Thermoelectrics, Nextreme, Tellurex and others can sometimes produce watts per cubic centimetre and in actuators and vibration harvesters, piezoelectrics can exhibit 60% efficiency. Electrodynamics and photovoltaics exhibit a good compromise of both parameters. The figure below gives some guide to the cost/ life options, precise figures being contentious. Usually the lifetime claims oif energy harvesting systems arebased on accelerated tests and guesses. Those in red below have no moving parts.
Cost-life options for currently popular forms of energy harvesting 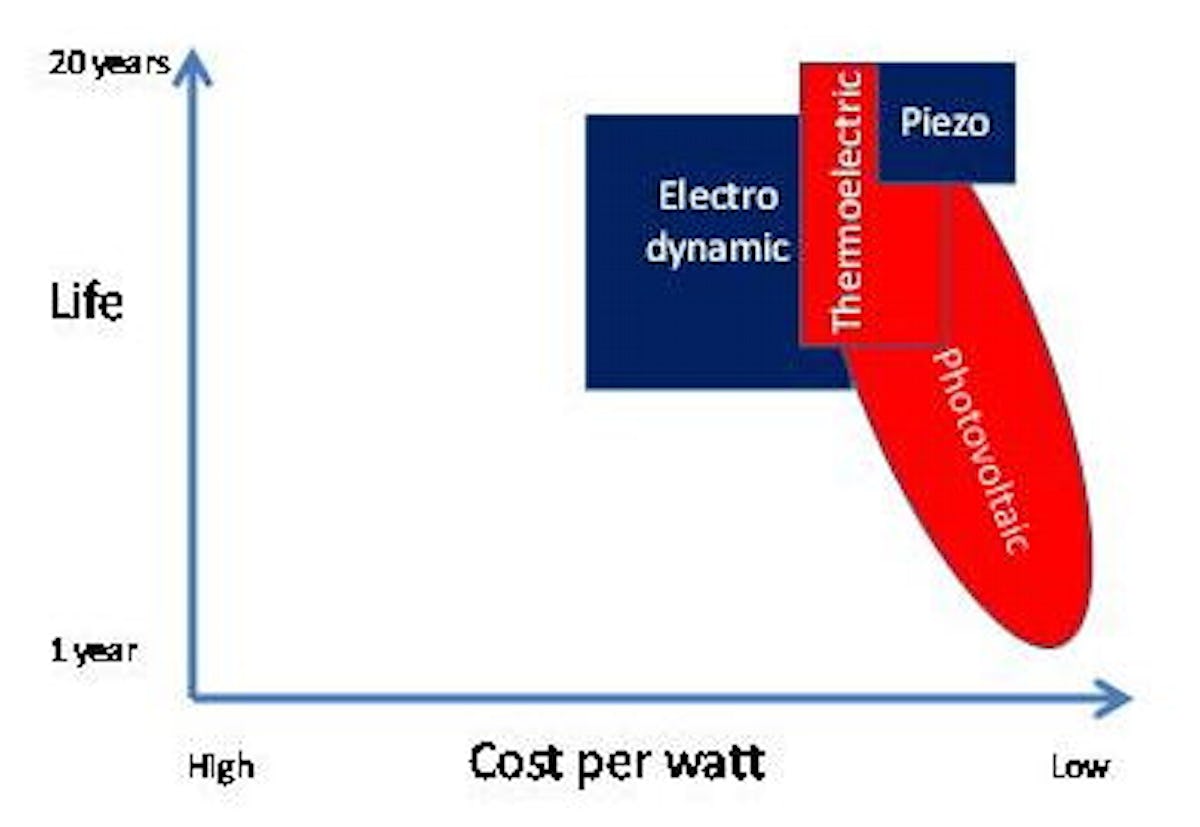 Source: "Energy Harvesting and Storage for Electronic Devices 2009-2019" IDTechEx
Photovoltaics has a particularly wide spread of options because the shorter lived versions such as organic OPV and Dye Sensitised Solar Cells (DSSC), while currently exhibiting only one to five years life, variously offer low cost, transparency, working with low levels of light, being tightly rollable and printable on large areas. They lend themselves to applications requiring modest life such as medical disposables, merchandising, e-labels and e-packaging.
Other versions of the new photovoltaics have excellent life of at least twenty years but are not, as yet, transparent or tightly rollable. These include printed nanosilicon (potentially from Kovio and Seiko Epson), printed copper indium gallium diselenide (NanoSolar) and thin film cadmium telluride (First Solar).

The cost criteria are less demanding when one is not trying to replace power stations with less than one dollar per watt for "energy parity". With energy harvesting for small devices, figures of up to ten times as much can pay back because one is avoiding wiring in buildings or the burden of visiting millions of installed batteries to replace them.
However, there is a place for batteries in some interim products such as the Citizen Eco-Drive™ photovoltaic wristwatches where the battery lasts for the life of the watch. It is premium priced and very successful.

38% of energy is consumed in buildings and more affordable building controls of longer life are the focus of most of the 70+ companies in the EnOcean energy harvesting alliance which provides interoperable wireless sensors and controls that never need a battery.
For example, EnOcean has installed 4200 wireless and battery-less light switches, occupancy sensors and daylight sensors in a new building construction in Madrid. These are powered by energy harvesters and embedded in the building. This saved 40% of lighting energy costs by automatically controlling the lighting in the building, 20 miles in cables, 42,000 batteries (over 25 years) and most of the cost of retrofitting.
In similar applications, the value proposition for the Lightning Switch™ piezoelectric wireless switch technology from PulseSwitch Systems in the USA emphasises the saving in construction costs. In one case, a 71,000-square-foot industrial facility needed 21 banks of lighting with associated control.
The contractor originally bid $63,000, based mostly on the labor and overhead costs of installing more than a mile of conduit and switch wire. He then bid again and won, using various Lightning™ products to complete the job for $10,000 for materials and 10 hours of labor. This technology has applications in remodeling and renovation projects, since Lightning Switches™ - unlike re-wired switches - require no new wires, no demolition, no patching, no re-painting, etc.
Dividing walls supporting switches can be moved without rewiring. Another contractor wrote, "We tried your product and saved the customer hundreds of dollars, time, and the hassle of breaking into the drywall and repairing the wall." (Source PulseSwitch).

Life exceeding that of alternatives by at least ten years is now a strong selling point for most forms of energy harvesting. Perpetuum in the UK makes electrodynamic vibration harvesters where system life is expected to be in the region of 20 years because of the absence of batteries.
KCF Technologies has vibration harvesters that are maintenance free for "at least 15 years". The Lighting Switch™ piezoelectric light switches mentioned above have no battery and 20 years life, according to reports.
Suppliers of the EnOcean piezoelectric light switches and allied controllers using various forms of energy harvesting claim 25 years life, with over 500,000 installed already. We therefore have a pattern emerging by which the life of energy harvesting devices without batteries is at least ten years longer than the life of battery driven wireless devices and this alone gives valuable paybacks.
There is more. During the life of a battery, it may need recharging many times or otherwise have maintenance. Energy harvesting is usually maintenance free.

There is huge significance in progressing from billions of small batteries in use today to tens and hundreds of billions of small devices yearly that require power. The economically active population of the world is under six billion and they manage with about four billion mobile phones yearly (many people buy two every year) with batteries that are often flat and billions of electronic watches and similar items yearly that need battery replacement all too often.
However, whereas this is manageable because most people only have one or two of these products, the next stage involves people possessing hundreds of small powered devices. Industry will need to manage wireless sensor networks involving tens of thousands of nodes with their own power. These cannot be visited without great expense and labor and some cannot be visited at all. This is evaluated in the new IDTechEx report, Wireless Sensor Networks 2009-2019. We therefore hit a tipping point where it is not a matter of payback versus the labour intensive battery option: it is more a matter of doing it with maintenance free energy harvesting or not doing it at all. 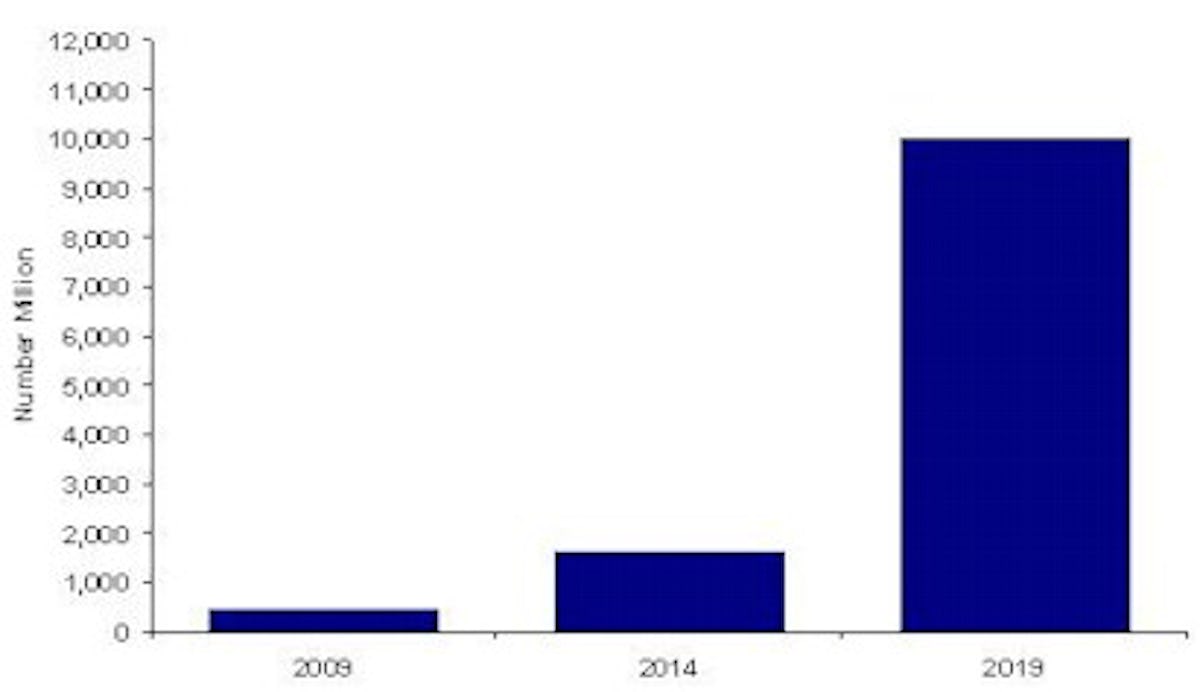 Key enablers of the next generation

The next generation of energy harvesting devices will be smaller, lower in cost and have lives exceeding twenty years in many cases. The energy density will improve but there is probably more scope for the efficiency to improve and that will also expand the addressable market. Many devices will be announced that work within the human body without need of further intrusive surgery. Many others will be embedded in apparel. Energy harvesting will power many of the billions of medical disposables needed for self-diagnostics and drug delivery as the demographic timebomb - too many old people - hits.
Among the key enablers of all this will be micro electromechanical systems (MEMS), both harvesting energy and sensing. Even more important will be printed and potentially printed electronics because this is key to improving performance, size and cost of photovoltaics, thermovoltaics and sometimes piezoelectrics and electrodynamics as well. For example, thermoelectric elements less than a few microns in thickness are now offered that are far more efficient.
Printed photovoltaics and piezoelectrics exist today and printed flexible electrodes are used with many forms of energy harvesting including the experimental capacitive versions employing electroactive polymers.
Printed electronics provides biocompatible, stretchable, woven and other versions needed in certain applications. Indeed, printed electronics is key to making the cost and form factor of the electronic circuits that convert energy harvesting more acceptable as well.
For more information see details of the new IDTechEx report Energy Harvesting and Storage for Electronic Devices 2009-2019. The 282 page report profiles the EH activity of 200 organisations, mentions about 80 others in context and provides ten year forecasts.
In addition, at the conference Printed Electronics Europe in Dresden Germany, 7th - 8th April much of this will be covered. It is the world's largest conference and exhibition on the subject. NASA, Power Textiles, Interactive Wear, Würth Solar, Samsung, Texas Instruments, Medixine the healthcare company specialising in disposable electronics, Fiat and over 60 other exciting speakers will take the stage, with many end users describing what they want next.
New for 2009 is the IDTechEx Energy Harvesting and Storage conference. Being held in magnificent Cambridge UK on 3rd - 4th June, this international conference and exhibition will assess the market sizes, applications, technologies and opportunities for energy harvesting and storage.
PrintForwardTweetLikePinredditShare
Previous
Next