2006 6월13일 Dr Peter Harrop
Ask someone in the street about RFID and they may say it is tagging prisoners. However, those in the industry generally talk about putting labels on pallets and cases necessitated by the commendable commands of leading US retailers, which see sales increase and costs decrease as a result of their suppliers doing such tagging. However, if we look at the major spend and potential spend on RFID, we get a very different picture. The global spend on RFID labels for pallets and cases alone - mainly for Consumer Packaged Goods (CPG) companies - will be around $0.09 billion this year rising to no more than $1.75 billion in 2017, provided the collapse in prices is halted at five cents and users demand it all over the world. The value of the associated systems and services will be a similar figure. By contrast, the table below gives indicators of the size of some other RFID tag markets, often involving the more profitable and capable active tags.

Source: IDTechEx www.idtechex.com/profit
A closer look reveals a more stark contrast. Most RFID suppliers to the retail and consumer goods industry are losing money, particularly where pallets and cases are concerned. This often amounts to millions of dollars yearly and sometimes more. By contrast, most suppliers to other sectors are making money, providing a secure, enduring support for their customers. Despite this, retail/CPG will probably dominate the RFID market by sales value in ten years' time. The global value of RFID sales of systems including tags in 2016 is segmented below.
Global RFID market value for systems including tags 2016 - a possible scenario 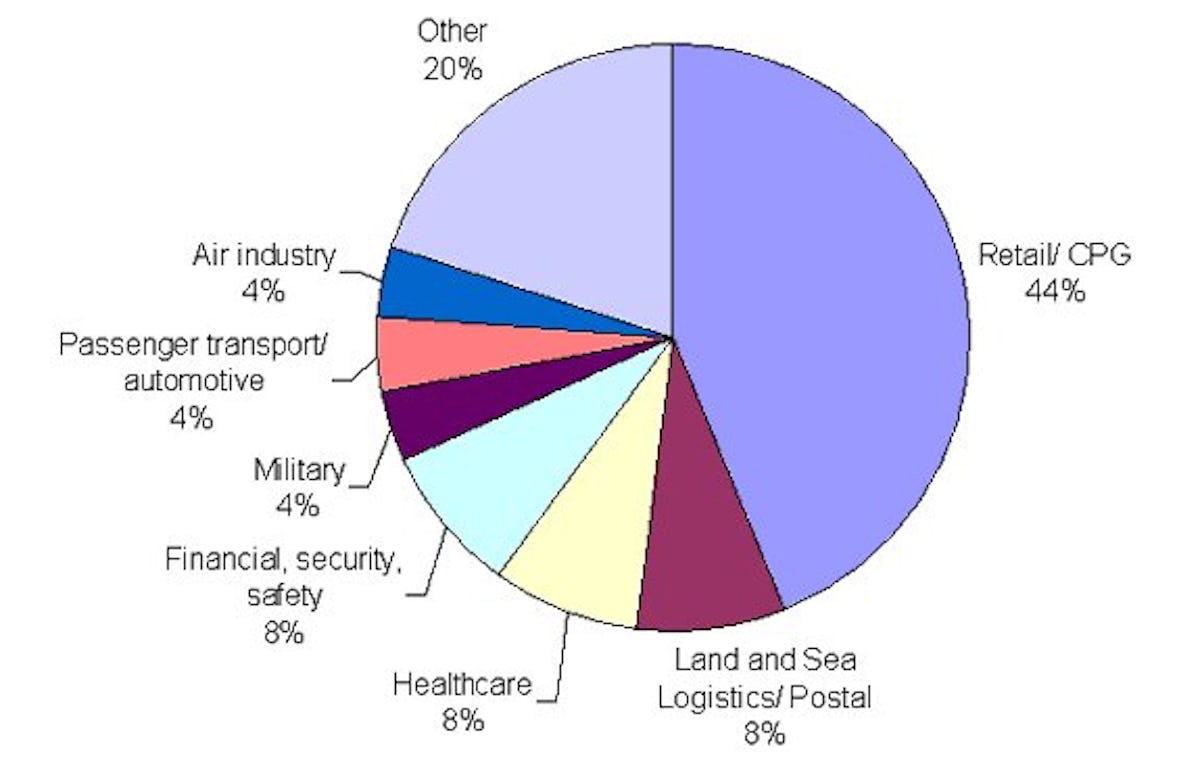 Source: IDTechEx www.idtechex.com/profit
Those supplying the smaller sectors will be more likely to make money and, in the healthcare and air industry sectors, they often have the satisfaction of reducing human suffering and saving lives. Think of RFID enabled packs of pills that prompt and record compliance with instructions, consider anti-counterfeiting RFID for drugs, error preventing RFID on hospitals instruments and anti-terrorism measures in airports. Indeed, the value of Healthcare and Air Industry RFID is growing faster than the RFID industry overall.
Another surprising insight comes from considering item level tagging compared to pallet/ case and other applications. This is shown below.
Global RFID market value for RFID tags in 2016 - a possible scenario 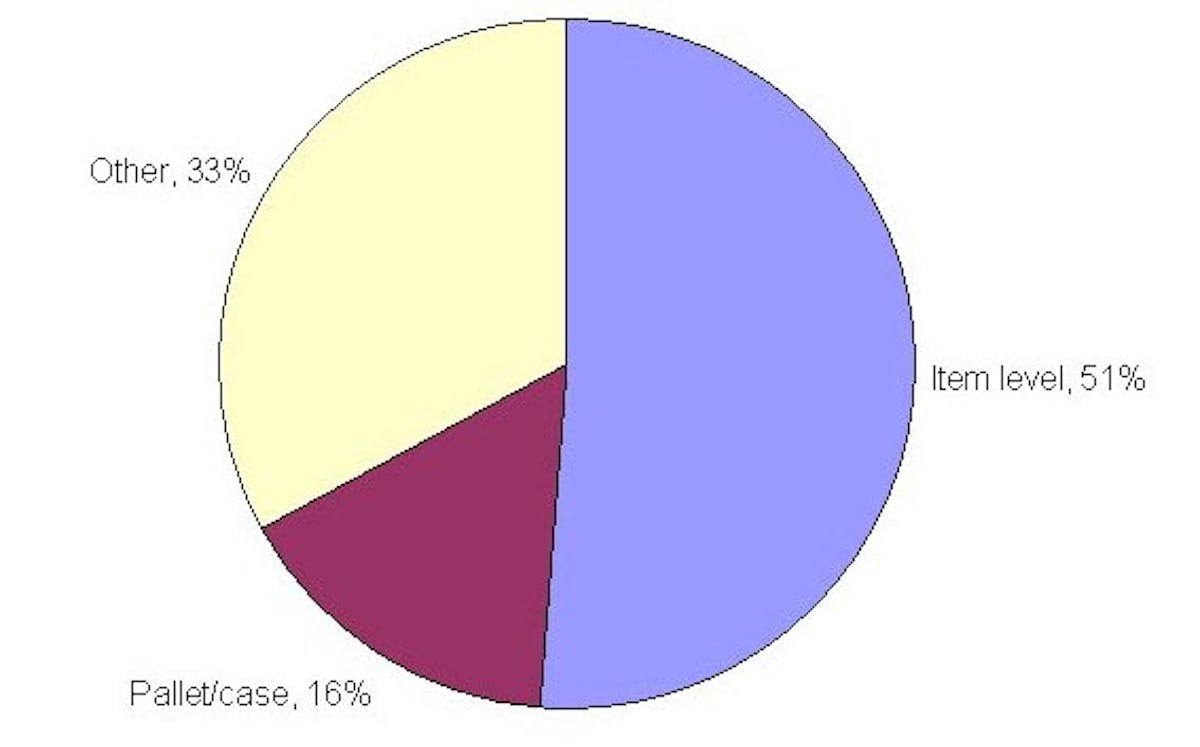 Source: IDTechEx www.idtechex.com/profit
Looking behind these figures we see that item level tagging hugely benefits consumer goods suppliers whereas pallet/case tagging does not. Savvy retailers such as Best Buy, Marks and Spencer in the UK, Boekhandels Groep in the Netherlands and Maruetsu in Japan have also seen how item level tagging is exceptionally beneficial for them as well, multiple paybacks being the norm. Airbus, Boeing and the pharmaceutical companies see the most to be gained from item level tagging. Although we do not categorise air baggage as item level there is a similar story in aviation with the baggage being the focus more than the conveyance. Legal push is driving drug and tire tagging, which also helps.
All that means that item level tagging is not only happening alongside or even before pallet/case tagging, it usually commands a higher price and sees most participants making satisfactory, sustainable returns. Globally, item level RFID tags will average a higher price and a more satisfactory return than the much reported pallet/ case tags until at least 2010.
Tags for aircraft parts, gas cylinders and beer kegs justify several dollars each, for library books (doubling as anti-theft tags) $0.5 to $1, for rented apparel, tires and laundry $1 and for retail apparel and drugs $0.2 to $0.3. The sub 10 cent, heavily loss making tag for pallets and cases and its purchasers driven by mandates without good paybacks are not encountered with items. Companies purchasing item level tags see satisfactory paybacks themselves and their requirements are such that they want quality and performance and are prepared to pay for it.
True, the 51% value share for item level tagging in 2016 will only be achieved if we add 0.1 to 2 cent tagging of vast numbers of postal and supermarket items but that is some time off and it will probably involve different suppliers with very different technologies.
Last year, the profits of 1000 RFID activities varied from about ten million dollars to a loss of $53 million. Too much of this was unplanned and unintentional. Some of these companies are growing rapidly and profitably but others have recently gone out of business. Yet, in this fast growing, fragmenting market, the performance of the players obeys rules of the marketplace and success and failure can largely be predicted and controlled.
The conference and exhibition RFID Smart Labels Europe will major on the hot areas of Healthcare, the Air Industry and Active RFID but also give the complete picture, including many other applications and the disruptive new technologies of Near Field UHF and parasitic WiFi RFID. It will be truly global in coverage and its location looks out on the scenic Tower Bridge in London. See www.smartlabelsEurope.com

. The new detailed analysis "How to Make Money out of RFID" is available from www.idtechex.com/profit. This unique report on how to make money in RFID is packed with facts and analysis. IDTechEx, a consistently profitable RFID business, explains the trends, opportunities and tools for optimization of cash generation. It reveals the rationale behind the sudden increase in both fund raising and acquisitions in RFID and who is doing what and why - also what should come next. IDTechEx analyses how to benefit from the trends, interpreting the disruptive new technologies and its 10 year market projection. This lucid and informed examination of how to succeed in RFID should be required reading for all seeking to maximize their contribution to this exciting sector and create enduring profitable growth, from manufacturers to consultants and investors.
PrintForwardTweetLikePinredditShare
Previous
Next