2020年3月30天 Dr Ivan De Backer
In its recently published report Innovations in Robotic Surgery 2020-2030, IDTechEx forecasts that the robotic surgery market will reach over $12 billion by 2030. The report breaks down the market landscape and emerging technologies in the field of robotic surgery.
Intuitive Surgical, manufacturer of the da Vinci Surgical System, has been the uncontested market leader in robotic general surgery for the last two decades. With 5,582 systems installed worldwide and over seven million surgeries performed with da Vinci to date, the company is so firmly established that it has practically become synonymous with the term robotic surgery.
Within the last five years, interest in the field of robotic surgery has soared. Investments in companies operating in this space have skyrocketed since 2016, recording an increase of over 300% in three years, and total investment to date has reached $1.36 billion.
Although Intuitive Surgical has long been the only company with a surgical robot cleared for general surgery, the situation could be about to change. Today, the market pioneer is faced with competition from more than a dozen newcomers that are exploring various configurations and approaches to robotic surgery.
Some companies aim to directly compete with Intuitive Surgical (i.e.: operate in the same field, perform the same types of procedures) by developing robotic platforms that are conceptually similar to da Vinci. This means that their robotic platforms include a surgeon console, a vision cart and one or more robotic arms. CMR Surgical, for instance, is considered a direct competitor to the da Vinci system as its robot Versius, which became available on the market in late 2019, can perform similar tasks. The Cambridge-based company competes with Intuitive Surgical by making its robot available at a smaller cost. Apart from cost, the distinct advantage of Versius over other robotic surgery platforms is its size and portability. Unlike da Vinci, Versius' arms are detached from each other and can be transported separately. It is smaller in size (physical footprint of 38cm x 38cm), giving surgical teams access to the patient at all times and facilitating its integration into surgical workflows. 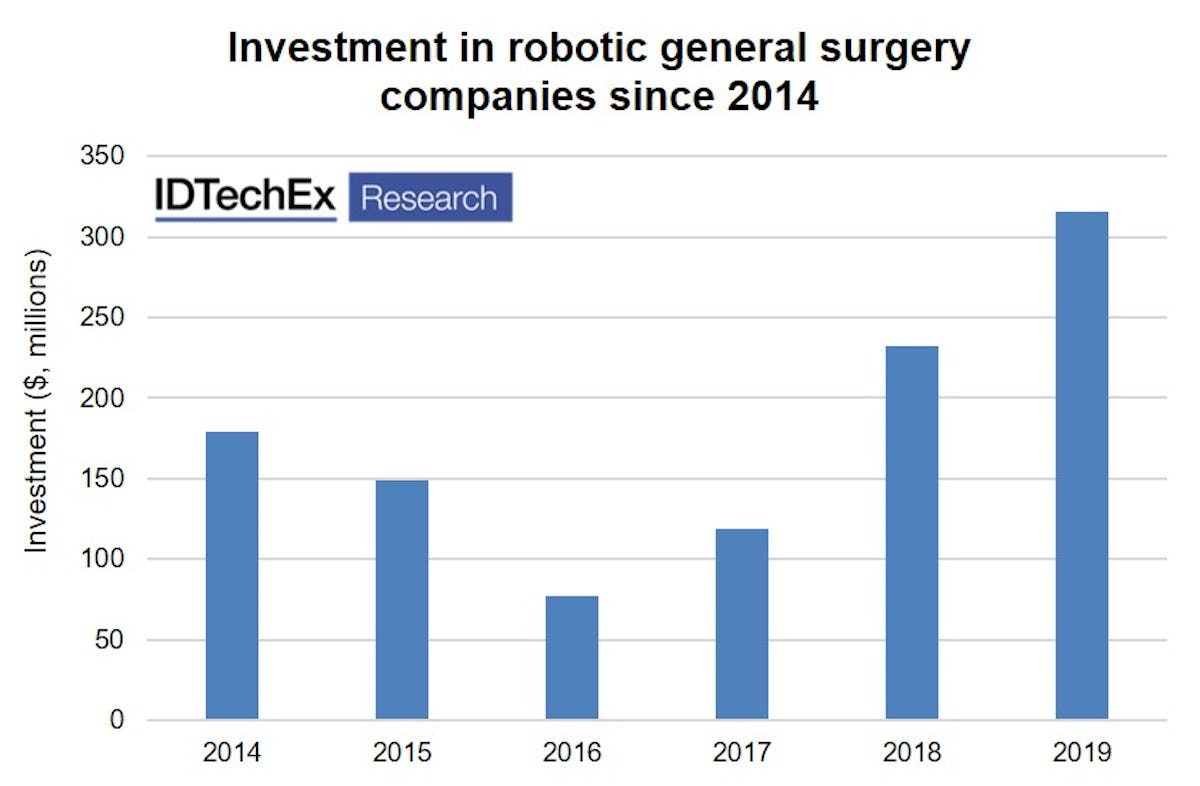 Investments in robotic general surgery. Source: IDTechEx Report Innovations in Robotic Surgery 2020-2030.
Other companies strive to distinguish themselves from da Vinci through an alternative design, form factor or approach to conduct surgery. Medrobotics, for example, has created a surgical robot with flexible arms that enables entry into the patient's body through natural orifices. This circumvents the need for incisions entirely, prevents scarring and helps patients to recover quicker - they are sometimes discharged from hospital the following day. Medrobotics' Flex Robotic System navigates through complex anatomy using 3D HD visualisation capabilities. It is designed to reach challenging surgical targets by creating a 180º path. First, the surgeon navigates a 3D camera to the target destination. Once it is reached, the flexible arms containing miniature surgical instruments are deployed through the same pathway as the camera. The surgeon manually operates the instruments, which look very similar to normal laparoscopy tools but have flexible arms.
There is also a focus on reducing the size of surgical robots in order to make them less cumbersome and more portable. In an effort to reduce the price of robotic systems, Virtual Incision is developing a miniaturised robotic device that operates entirely inside the body through a single abdominal incision. It features a small, self-contained surgical device that is inserted in the patient's abdomen. The robot is designed to perform colon resection procedures for colorectal cancer management, meaning that its applications overlap with those of da Vinci and that Virtual Incision is competing in the same market as Intuitive Surgical. Virtual Incision have therefore designed a completely different type of robotic system to distinguish itself from the market leader. Its robot reportedly weighs two pounds, which is hundreds of times lighter than the majority of robotic general surgery platforms on the market. It is therefore portable and easily transportable between operating theatres or even hospitals. In addition, its smaller size means cheaper manufacturing costs. Virtual Incision has thus stated that its robot will be much cheaper than those of its competitors. The system is still in development and has not yet received regulatory approval.
The robotic general surgery space is in a rapid state of expansion as numerous companies are entering the ring in the hope of seizing a portion of the market share. This is only the beginning as many of the companies' robotic systems have only been launched in the last two years and others have yet to reach the market. Will these companies succeed in upsetting Intuitive Surgical's reign as market leader within the next decade?
To obtain market forecasts and information on the latest trends and technologies in the field of robotic surgery, please refer to IDTechEx's report Innovations in Robotic Surgery 2020-2030 by visiting www.IDTechEx.com/RoSurgery.
PrintForwardTweetLikePinredditShare
Previous
Next