E Ink is the only supplier of electrophoretic displays that are used in e-readers such as the Amazon Kindle. E-readers shipment experienced a spectacular peak in 2011 but they are now in decline (see figure below) because of the rise of full color LCD tablets and the difficulties that E Ink has faced in achieving good quality colour and high switching speeds.
The most significant event was last year's acquisition of Liquavista by Amazon from Samsung (amount undisclosed). Amazon is already a leader in e-readers and tablets and the acquisition suggests that they envision full color multimedia tablets based on reflective displays. Since the acquisition, Liquavista has been hiring again in the Netherlands. 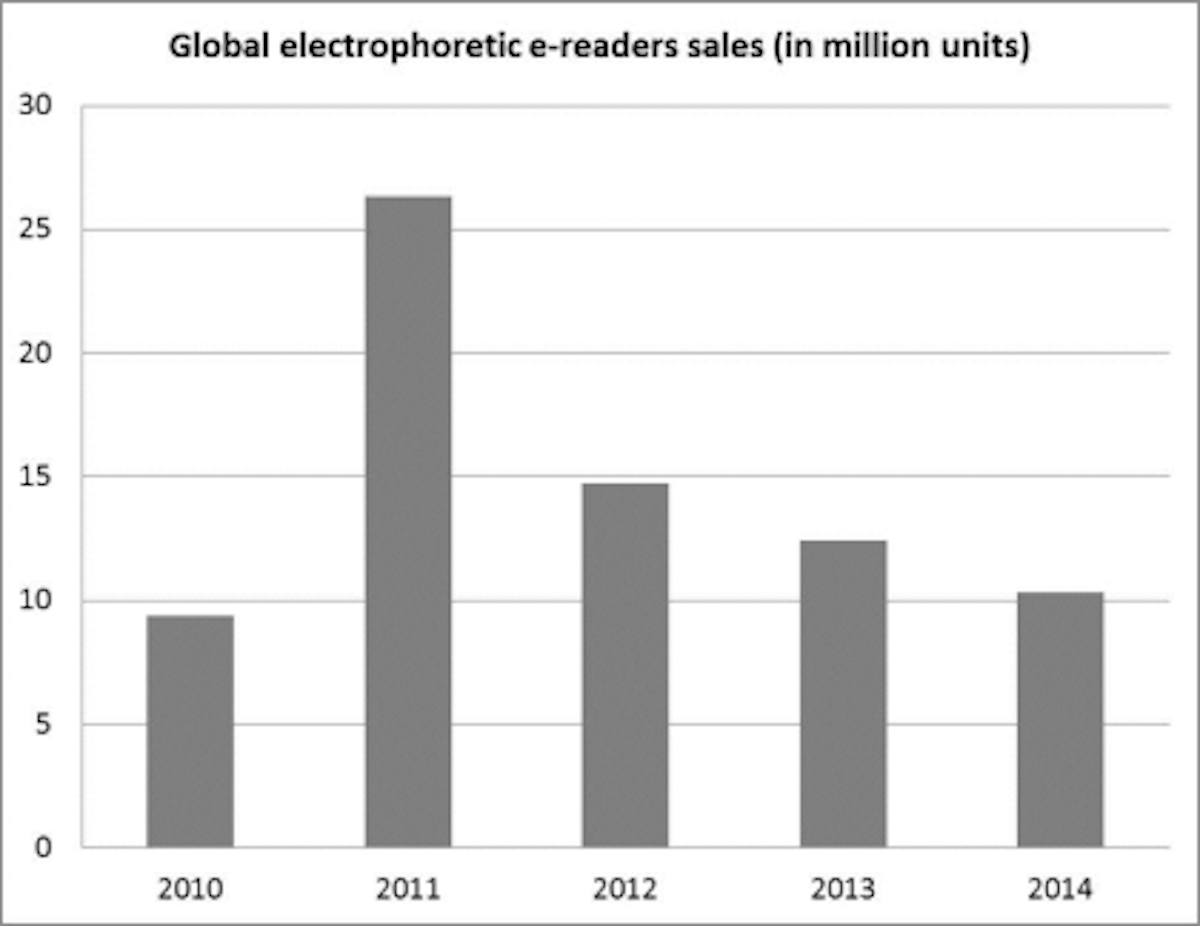 Source: IDTechEx
E-readers are likely to die as a product category. Consumers now expect their device to offer multiple functionalities and an e-reader is only designed for reading static pages. Because of this trend, E Ink is now attempting to diversify into digital signage and electronic shelf labels, but with little success so far.

No clear winner in the technology arena

Overall, E Ink is the only player with a technology which can be fully flexible. This can be a strength, especially when targeting wearable electronics, but the lack of video and colors will remain a huge handicap.
HP has invested for several years and has developed an electrokinetic display which shows performance comparable to printed media. However, the technology was recently spun out as Folium Optics (headquartered in the UK).
Gamma Dynamics is a startup company with a goal to commercialize the technology from the University of Cincinnati (research from Prof Jason Heikenfeld), called "electrofluidic". According to their website switching time could be below 30ms, although a prototype has not yet been demonstrated in public. Last year, they told IDTechEx they were targeting signage and electronic shelf labels.
Qualcomm has an interesting position since they have the only technology which has both low-power and video rate. They key question will be the one of cost, since the previous attempt to commercialize Mirasol displays ended in failure due to excessive prices.
There are other start-up companies, such as IRX Innovations and ClearInk, but they appear to be very early stage and in stealth mode.

For e-paper technologies that are able to offer video rates (such as Liquavista), there will be an opportunity to compete against LCD on tablets and smartphones. Indeed, for mobile devices the display module needs to be suitable for both indoor and outdoor environments.
For bistable displays, their low-power features can make them attractive for wearable devices where the size of the battery needs to be restricted. Qualcomm has recently launched a smartwatch under the brand Toq (see video review from CNET below), selling in the US for $350. If this is a success, Mirasol will be a strong competitor against LCD and OLED displays in the smart watch market.
Outside of consumer electronics, street furniture makers have a need for print-like displays that can be used outdoor. JC Decaux told IDTechEx they were willing to pay a premium if the picture quality was suitable for advertising.
Top image: Qualcomm
PrintForwardTweetLikePinredditShare
Previous
Next