2013年10月31天 Dr Harry Zervos
Energy harvesting is the process by which ambient energy is captured and converted into electricity for small autonomous devices, such as satellites, laptops and nodes in sensor networks making them self-sufficient. Although energy harvesting applications reach from vehicles, to building and industrial automation all the way to the smart grid and the creation of smarter cities, the majority of the value this year is in consumer electronic applications, where energy harvesters have been used for some time. IDTechEx is forecasting that the total market for energy harvesting devices will rise to $2.6 billion in 2024, as described in detail in the newly updated report on the topic, "Energy Harvesting and Storage for Electronic Devices 2014-2024: Forecasts, Technologies, Players" (www.idtechex.com/energy)

Energy harvesting, otherwise known as power harvesting or energy scavenging includes photovoltaics, thermovoltaics, piezoelectrics and electrodynamics, among other options, which are now being used in a wide variety of applications. The technology has reached a tipping point, because the necessary lower power electronics and more efficient energy gathering and storage are now sufficiently affordable, reliable and longer lived for a huge number of applications to be practicable.
The far reaching implications of the enabling technologies reaching maturity can be understood by looking at the variety of applications becoming reality and the variety of harvesting technologies they utilize. Earlier in October this year, researchers at Disney laboratories presented a new energy harvesting technology that generates electrical energy from a user's interactions with paper-like materials. The energy harvesters are flexible, light, and inexpensive, and they can utilize different user's gestures as described below. The harvested energy is then used to actuate LEDs, e-paper displays and other devices to create interactive applications for books and other printed media.
Fig. 1 Schematic principles of paper generators 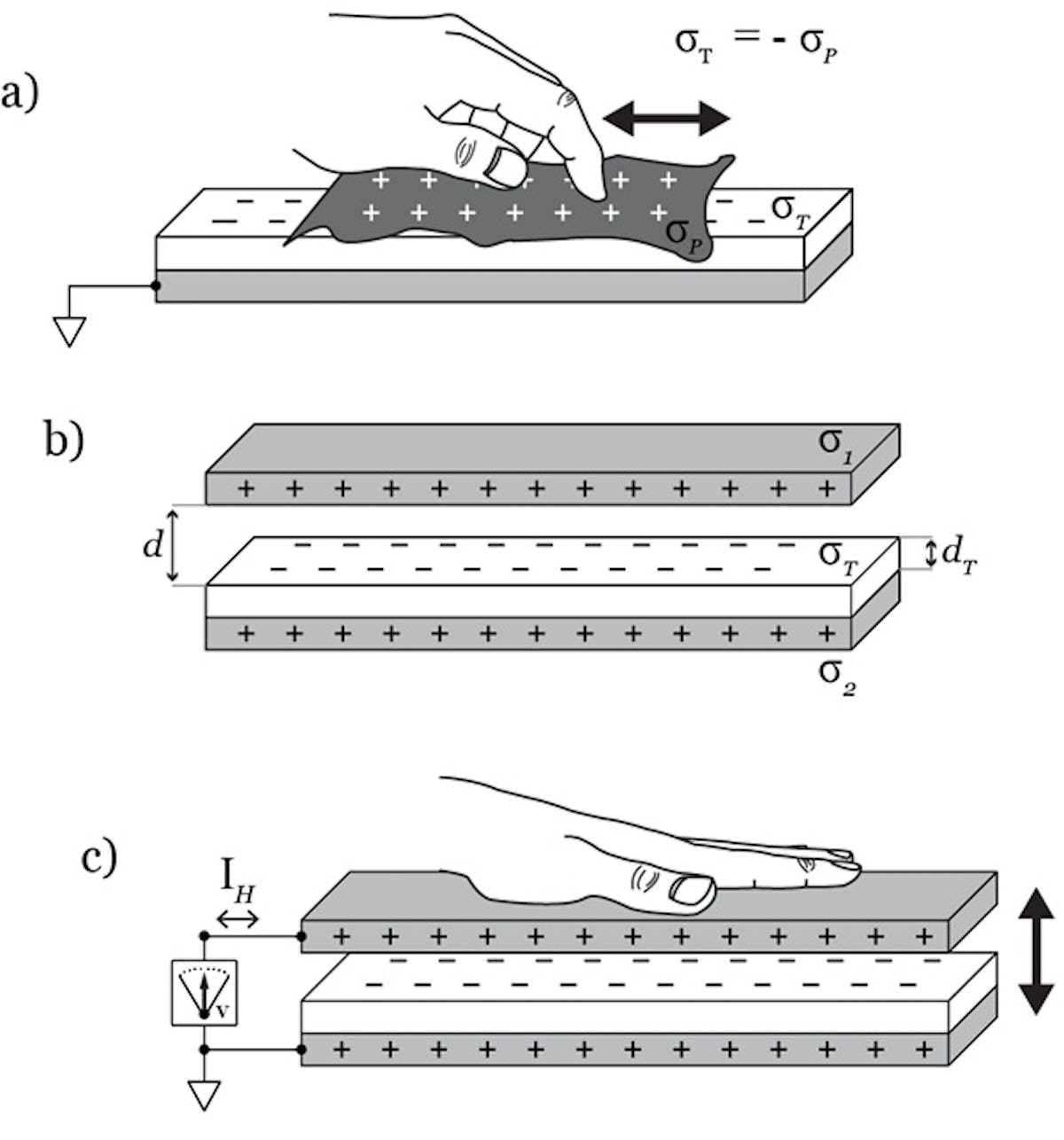 Source: Disney Research
According to Disney research's publication, paper generators are based on electrets: materials that hold quasi-permanent electric charge. When a PTFE sheet is rubbed with ordinary paper, opposite-polarity charges accumulate on the surfaces of the paper and the PTFE due to the triboelectric effect, forming the electret (Figure 1a). Because PTFE has a lower electron affinity than paper, charge on the PTFE is negative. When the PTFE sheet is stacked with conductive layers that serve as electrodes, such as silver coated polyester sheets or paper with printed conductive ink, the charge on the PTFE attracts free charges of opposite polarity, which then accumulate on the surface of the conductors, as shown in Figure 1b. This structure forms the basis of Paper Generators.
The operation of the Paper Generators relies on the movement of the two conductive sheets relative to each other and the electret, PTFE. Energy is created when a user moves electrodes. As the relative positions of the sheets change, the distribution of the induced charges, the electric field, and the total capacitance between the conductors change, resulting in an electric potential difference between the conductors (Fig 1c).
The same principle of operation applies to the horizontal movement of the top electrode (sliding). It is also possible to replace the top electrode with the user's hand. In this scenario, the user holds and rubs the PTFE sheet on and off the bottom electrode, while touching the other end of the voltmeter with his free hand. The circuit is completed through the users body. These different Paper Generator configurations and structures allow for energy generation using different user gestures, such as tapping, rubbing, touching, rotating and sliding.
With light harvesting laptops for developing countries, wireless light switches working from the power supplied by your finger push and wireless sensors in oil fields monitoring equipment powered by vibration - these are all harvesters in use now with many more applications emerging.

This year, most of the harvesters used in the above market segments are solar cells followed by electrodynamos, two relatively mature energy harvesting technologies. However, many new technologies are now taking some market share enabling power in areas not possible before. This includes thermoelectrics - generating power from heat - where organisations such as the Department of Energy in the US are working with BMW and GM to turn heat waste from engines and exhaust into power for the vehicle's electrical systems. NASA use thermoelectrics to power Mars rovers where they work without light, unlike solar cells. Piezoelectric energy harvesters are also of great interest due to their small form factor and high efficiency. In 2022, these four energy harvester types will have near similar market share for industrial sensing applications. However, even by then solar will continue to dominate for consumer applications. 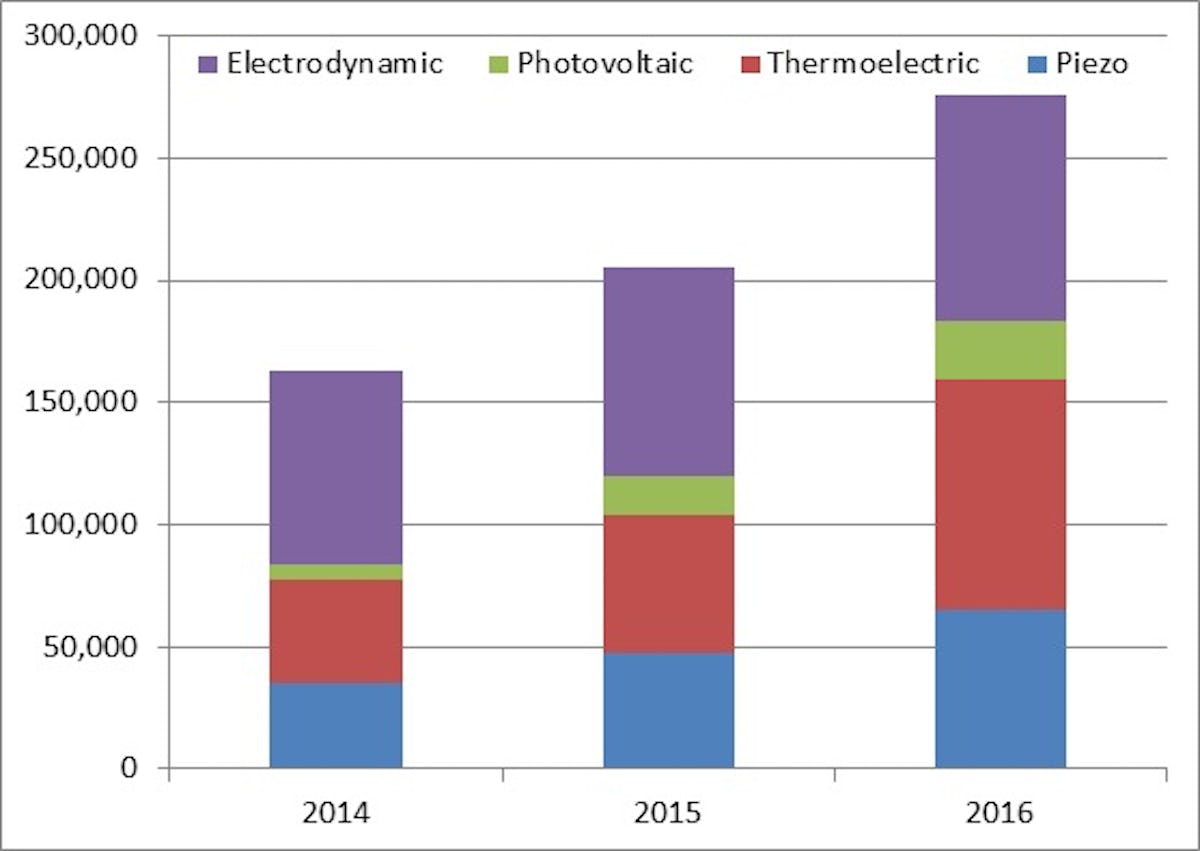 For more on this topic see the IDTechEx research report Energy Harvesting and Storage for Electronics Devices 2014-2024: Forecasts, Technologies, Players
PrintForwardTweetLikePinredditShare
Previous
Next