2018年5月11天 Dr Richard Collins
The need for lightweighting is paramount across numerous sectors and understanding the material solutions has left a significant amount of uncertainty and potential opportunities. IDTechEx has been conducting technical market research in this field and the latest work can be seen in the market reports: Composites 2017-2027: Innovations, Opportunities, Market Forecasts and Lightweight Metals 2018-2028: Forecasts, Developments, Players.
Aluminium and Glass Fiber Reinforced Polymers (GRP) lead the way in volumes and supply chain maturity, but there are many other lightweight contenders championed and glamorised through their use in aerospace, motorsport and sporting goods. Two of the most notable contenders are magnesium and carbon fiber reinforced polymers (CFRP), which will be the focus of this article.
In addition, there are other lightweighting strategies at varying stages of technology readiness including: 3D Printing with both Polymers and Metals, Graphene and Nanotubes, Polymer Aerogelswww.idtechex.com/aerogels}}, as well as taking traditional materials and increasing the functionality. These are all extensively covered by IDTechEx through syndicated market reports and other market intelligence offerings, visit www.IDTechEx.com

for more.
The Good:
The good news about both these materials is that they provide excellent lightweight options and because of regulatory and performance drivers their usage is on the rise.
CFRP has almost unparalleled tensile strength and stiffness to weight, although due to the nature of using a fiber these properties are anisotropic. It also provides good corrosion resistance and is versatile through the choice of polymer, fiber content and orientation. Increasing use of thermoplastics, robotic automation, and multifunctionality are already signalling the next steps in this growing industry.
Magnesium is 33% lighter than aluminium. Although the stiffness-to-weight ratio for steel, aluminium, and magnesium are the same this does not scale linearly with thickness. In addition, magnesium is a highly abundant metal (8th on the list), it is recyclable, displays good NVH properties and energy absorption, has excellent fluidity in casting and is less aggressive to a casting die compared to aluminium.
The Bad:
There are many challenges underneath the surface of these materials that are not to be ignored.
CFRP has many disadvantaged most notably including the repair, reuse and recyclability of parts and the costs and challenges in volume manufacturing. These will not be explored extensively here, rather the reader is directed to a recent article highlighting many of these and how they are being tackled.
Magnesium also has many problems and the main ones are highlighted in the table below. This is also not including shrinkage on solidification, increased detail picked up from the die, poor creep resistance and formability.

The magnesium industry view one of their biggest challenges as that of the metal's perception. It is competing against the "sexier" CFRP and when most think of magnesium it usually brings back memories from their school days of burning a ribbon to provide a bright white flame. Associations with this flammability and a car suffering the same fate can cause an inertia to adoption either internally or from the awareness of the attitudes of their customers. The reality is that magnesium when in bulk form will not ignite until it melts, which is a similar temperature to that of aluminium. There are flammability concerns in production but that is separate to the final product.
As much as perception is a problem, it is also an excuse for the magnesium industry to not highlight the other problems and try to justify the current lack of high demand for lightweight metals beyond aluminium.
The Market
Both materials are seeing an increased utilisation rate year-on-year. 2 market forecasts can be seen below:

Market Forecasts for carbon fiber and magnesium castings. Full details can be found in the reports Composites 2017-2027: Innovations, Opportunities, Market Forecasts and Lightweight Metals 2018-2028: Forecasts, Developments, Players. Source: IDTechEx
CFRP has the healthier growth rate and continued demand is driving capacity expansions and the amount used. Aerospace was obviously (and remains) a key sector for this material, but other areas are gaining traction including automotive, energy, and infrastructure applications.
There is still a fair amount of turbulence in the supply chain as this material reaches maturity and disruptive innovations occur. This was highlighted in a previous article.
Magnesium is still dominated by die casting applications and predominant use in the automotive sector. As the graph shows the capacity still significant outstrips demand, but this gap will narrow over the next 10-year period.
Assisting the magnesium utilisation is the change in FAA regulation that previously banned magnesium for civil aerospace interiors. This change could pave the way for use in baggage bars, seat legs and hoops, armrests, tray tables and more which could have a trickle-down effect for other transportation interiors in the longer-term. 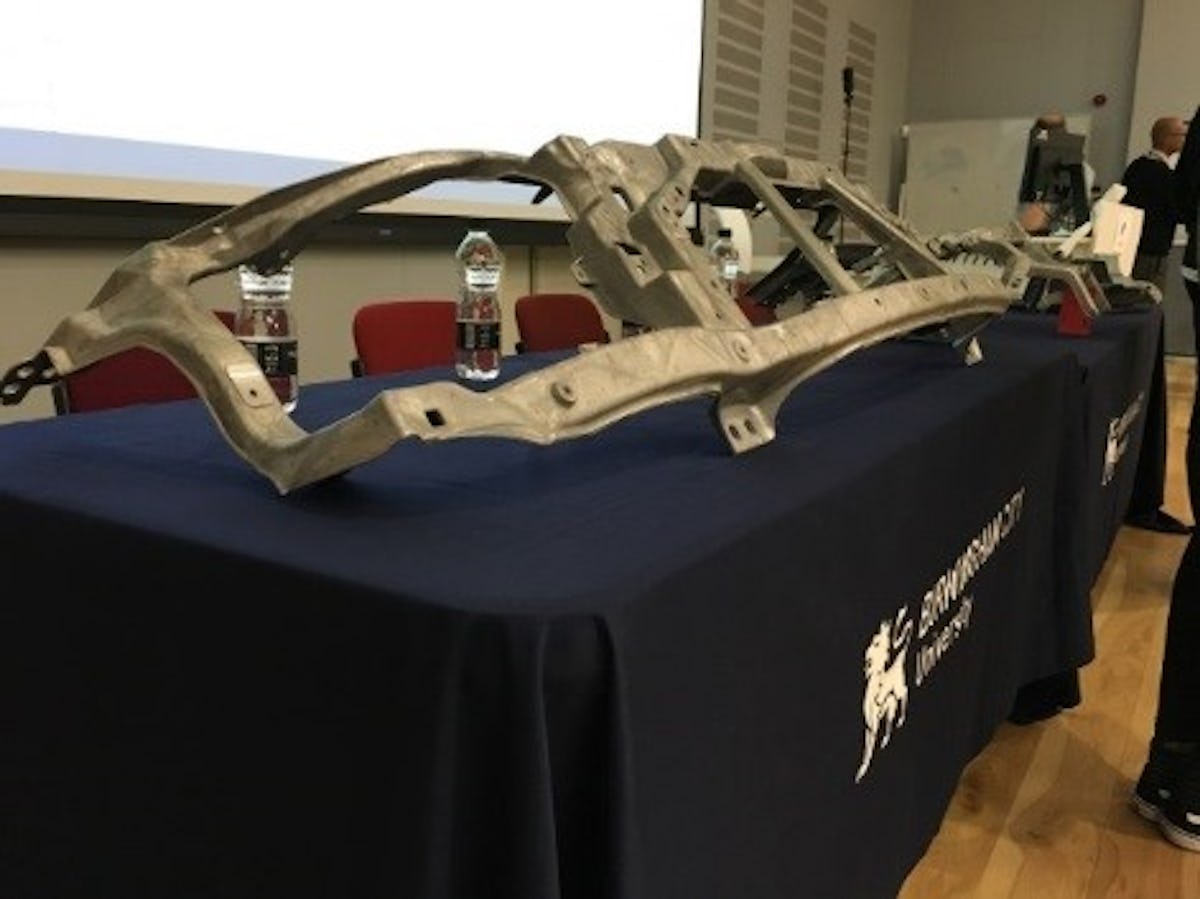 The above image is of the front end of a vehicle from Jaguar Land Rover. This part was cast by Meridian Lightweight Technologies, a key player in the magnesium die casting market, which was acquired by the Wanfeng Auto Holding Group at the end of 2013. Source: IDTechEx
The challenges outlined are still significant hurdles preventing this market from reaching even higher levels. Competition does not stop at these, previous articles from IDTechEx have outlined the role of Advanced Aluminium Alloys and Metal Matrix Composites as two more lightweighting solutions.
For more information on all of this and much more, including granular market forecasts, company profiles, and key drivers. See the market reports Composites 2017-2027: Innovations, Opportunities, Market Forecasts and Lightweight Metals 2018-2028: Forecasts, Developments, Players or visit www.IDTechEx.com

for more of our market research service and offerings.
PrintForwardTweetLikePinredditShare
Previous
Next