2005年9月10天
The IDTechEx Knowledgebase of case studies of RFID in action has now exceeded 1500 cases and over 1600 organisations and it is growing rapidly. One can now see yearly changes in the structure of the market. It provides some surprises.

The supply of RFID tags and systems is truly global, with highly respected suppliers in all the largest nations but also in countries such as Finland, Sweden Malaysia and Singapore. A few companies such as Trierenberg Group, Assa Abloy and Verichip (Digital Angel) have been on the acquisition trail, each buying several tag and system manufacturers in different RFID market sub-sectors. However, as soon as they do, a larger number pop up as new start ups in RFID. We believe that there are of the order of one thousand companies now supplying something significant in the RFID value chain, about ten times the figure of ten years ago.

The structure of the RFID Knowledgebase is rapidly changing. Paradoxically, the leading countries have pulled ahead, despite the number of countries with examples of RFID in action increasing to 65 from 46 one year ago. 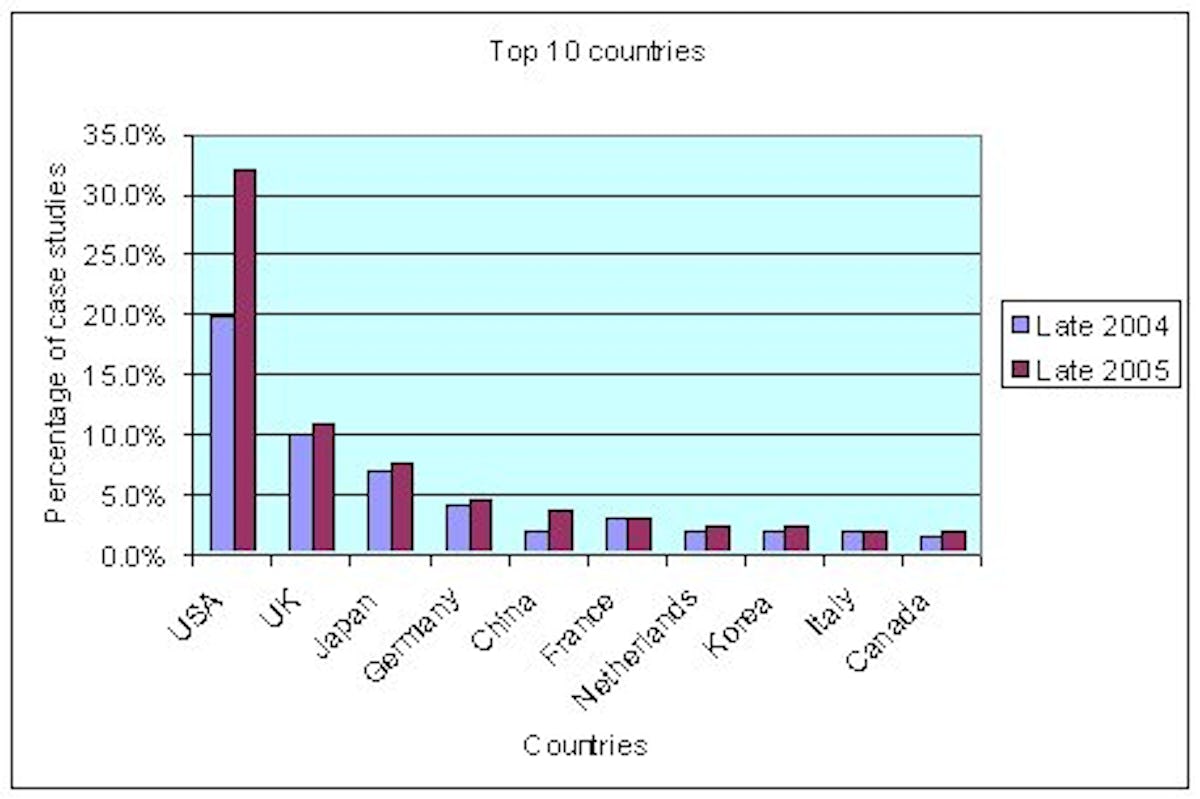 Considering their populations and GDP, France, Spain and Italy remain asleep as far as the use of RFID is concerned. Their impressive RFID suppliers such as ASK, Gemplus, Tagsys and Charles Oberthur largely earn their RFID money abroad. Germany is hanging in there but its use of RFID remains unimpressive in comparison to its size: it is by far the most populous and rich country in Europe.

The Netherlands is an increasingly active user, particularly considering its small size. Of the less active countries, China is now moving up particularly rapidly. Tagging pallets and cases at the behest of Wal-Mart and other US retailers is only a minor part of this story as yet. Apparel tariffs on China are now dismantled and Chinese industry is becoming even more efficient. It is therefore inevitable that China will make more that its current 30% of what Wal-Mart sells. It will all have to be RFID tagged at pallet and case level and later probably at item level too. China is starting the process of overtaking most countries in its RFID activity on any criterion - number of cases, tags, systems or value and we can already see it in our figures for the top ten countries by number of case studies now and one year ago.
Nevertheless, the lengthening list of countries newly adopting RFID must also attract the attention of suppliers. For example, Botswana has RFID tagged all cattle and Australia is proceeding to do the same. Most large countries are still talking about it.

A sign of the times is the list of countries new to the Knowledgebase that only have one entry so far. They are:
Anyone arguing that RFID is a luxury enjoyed only by large and/or rich countries is therefore wide of the mark.
For further analysis, click here.

How are the specifications changing for RFID tags? The answer is that one is increasingly talking of labels, cards and tickets. The labels are increasingly conforming to Electronic Product Code EPC specifications being created within ISO 18000 to the specific requirements of the leading retailers and the US Military for pallets and cases and by Wal-Mart and the pharmaceutical industry for item level pharmaceuticals. However, all these put together are, as yet, a minority of the market by value. Cards and tickets have long had their own ISO specifications.
Many of the initial trials and rollouts for these labels involved read only versions, partly because read write was not available at the UHF frequency chosen for pallets and cases and trialled for item level drugs. A few tens of millions of these were delivered in the first half of 2005. The opposite is true for HF tags, where read write is the norm, whether in the form of cards, labels or tickets. These use chips from Texas Instruments, EM Microelectronics and Philips in the main.
Now the so-called Gen 2 standard is available for UHF tags, the preference is to apply it to the newly available Type 2 read write versions, partly because computer networks are too fragile to cope with a simple license plate ID in the major food supply chains as yet. There is an irony here, because the barcodes that are currently used are read only. The difference is that they are generic and cannot be employed for the sophisticated, rapid tracking of individual items with unique IDs. We are therefore seeing a preference for read write perpetuated across the market, with read only remaining the exception and applying to the smaller niches such as non-stop road tolling.
Even the leading airport that is RFID labeling its baggage - McCarran International Airport, Las Vegas - has given notice that it will switch to read write labels now they are available at UHF, because it is happier carrying some related data in the baggage tag. In this case, the extra cost is insignificant compared to infrastructure changes being made to enhance security. For now, it is the financially stable airports that are bankrolling the RFID rather than the financially fragile airlines, though Delta is trying to finance its own program as it battles with solvency challenges.
Read write will not necessarily be dominant forever. After all, a read write chip can cost double, particularly when fear of lack of data synchronization and malicious tampering and eavesdropping leads to it being password protected as with Gen 2. The future of ultra low cost tags on everything in the supermarket and even all of the world's 35 billion pallets and cases being labeled every year is therefore delayed. By this we mean that the paybacks are unlikely to be available to justify more than five cents per label for tagging the last of the pallets and cases and the medium priced supermarket items and one cent is probably the most that the paybacks would justify on the lower cost supermarket items, the majority of books, postal items and so on. That means that, sooner or later, someone has to design systems that can cope with a very basic read write label as envisaged by MIT in 1999 when it started the whole idea of EPC and the Internet of Things. For now, the split in the RFID Knowledgebase is as follows for the 31% of cases where the information is available: 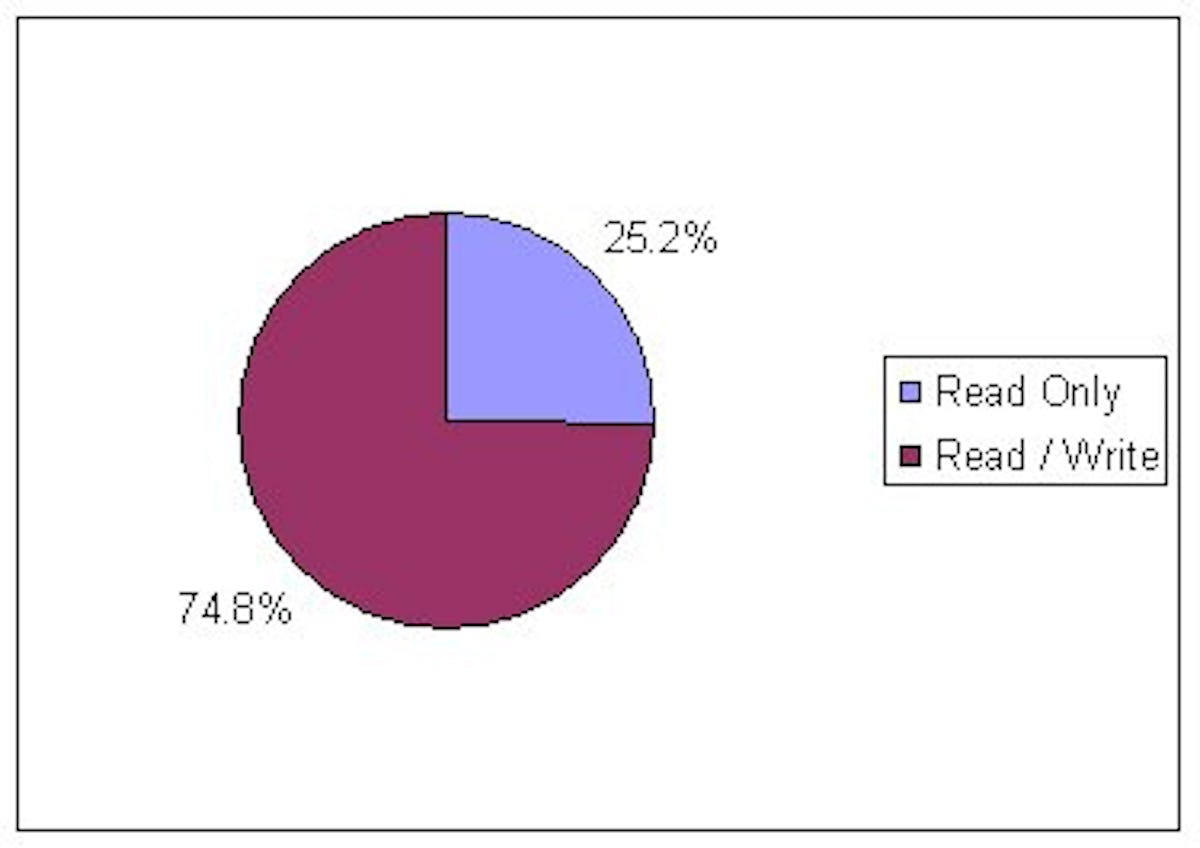 Source: IDTechEx
In the next few years we may even see a reversion to 80% or more of tags being read write.
For more see the RFID Knowledgebase www.rfidbase.com