2009年9月14天 Dr Peter Harrop
Plug in hybrid electric cars are now prioritised by most major car manufacturers. Pure electric on-road cars are prioritised by Nissan and a host of vibrant start up companies. They have one thing in common. The cleverest, most expensive part of their planned vehicles is increasingly the traction battery and it increasingly employs thin film and nanotechnology to enhance performance. Second generation lithium batteries that are safer and have better performance are incorporated in the Lightning Car Company's Lightning sports car, the KleenSpeed Technologies 200mph Formula One pure electric car, the Hawkes Ocean Technologies Deepflight submarines, the PC-Aero pure electric aircraft etc. but even more powerful, smaller batteries will be welcome.
As these new traction battery packs make the cars more and more capable, their share of the price of the car is set to become even more dominant. Actual percentages are hostage to commercial practice rather than costs while most of the battery suppliers and car manufacturers sell at a loss at present. However, in the new report Car Traction Batteries - The New Gold Rush 2010-2020, analysts IDTechEx estimate that, over the next ten years, the battery pack cost paid by the car manufacturer may rise from about 27% to about 57% of the average ex factory price of hybrids and pure electric cars combined.
Factors driving this include the need for lithium battery makers to make a profit at some stage and the strident demand for better car range ie energy stored and for better battery life. Battery packs increasingly incorporate electronics for safety and power conversion and some are planned with built in supercapacitors otherwise known as ultracapacitors. Some will be supercabatteries, otherwise known as bacitors.
There will be batteries incorporating or linked to thermoelectric, photovoltaic and electromagnetic energy harvesting. As several leaders in the automotive industry have recently commented, we have entered an era where, "The Battery is the Car".

Who has the robust strategy?

This raises an interesting point about strategy. Clearly those car manufacturers set to have the most valuable trading advantage in hybrid and electric vehicles will make batteries that are better than those available on the open market.
To this end, Toyota in Japan controls Panasonic EV Energy, a joint venture with Panasonic which makes most of the world's lithium and nickel metal hydride batteries. Nissan in Japan has the traction battery joint venture with NEC called Automotive Energy Supply. Daimler AG in Germany has just created a joint venture with Evonik Industries to make these batteries and Lithium Energy Japan is a traction battery joint venture between Mitsubishi Motors, Mitsubishi Corporation and automotive battery maker GS Yuasa. Indeed Blue Energy in Japan has Honda together with GS Yuasa making such batteries. BYD Auto in China is a leading battery manufacturer that is now a leader in hybrid and pure electric cars as well.
As for the types of battery involved, Panasonic sits astride the manufacture of nickel metal hydride traction batteries needed for the bulk of hybrids in the next five years, though China controls and rations the vital lanthanum needed. All the leaders are heavily committed to lithium batteries, particularly the second generation that are inherently chemically safe. For example, these versions have attracted the bulk of the Obama investment in car traction batteries in 2009.

Be a leading independent manufacturer

Another robust strategy is simply making the best car traction batteries.
This can be leveraged by making batteries for the 27 million electric bicycles sold yearly, one million mobility aids for the disabled sold yearly and even batteries for the planned super grids for electricity distribution.
LGChem in Korea is impressive here as is Sanyo that is becoming part of Panasonic. Other battery manufacturers have committed or will commit the one billion dollar entry fee for a chance to become the biggest in traction batteries, where there is an opportunity for someone to create a ten billion dollar business.

The vibrant heart of the car industry

Certainly, in the car industry, hybrid and pure electric cars will be the types with fastest growth over the next ten years, with hybrids in the lead. The reasons are well rehearsed. Saving money is of concern to everyone and saving the car industry, oil dependence, pollution and the planet is of concern to some.
The first hybrids and pure electric cars have had battery packs of modest capacity and capability with golf cars, Neighbourhood Electric Vehicles NEVs and the early Saturn Vue hybrid being among them.
However, as hybrid and pure electric cars were developed for better on road performance, the required capacity has increased. Nearly all mild hybrid cars are now grouped around 5-20 kWh and 200-400 volts with successive Toyota Priuses - the leading hybrids - actually coming down in voltage. Some of these hybrid car batteries have absorbed the function of the traditional lead acid battery for starting, lights and indicators and some have not. However, these mild hybrids are but an interim measure until the plug in hybrids that the public really want are both widely available and priced at little more than the alternatives. Then it will be difficult to see why anyone will want the mild hybrid. This will probably occur within ten years.
The end point is advanced hybrids that have similar batteries to advanced pure electric vehicles. After all, a series hybrid with a range extender is really a pure electric vehicle with an extra charging option.
This is shown below.
Evolution of hybrid and pure electric cars 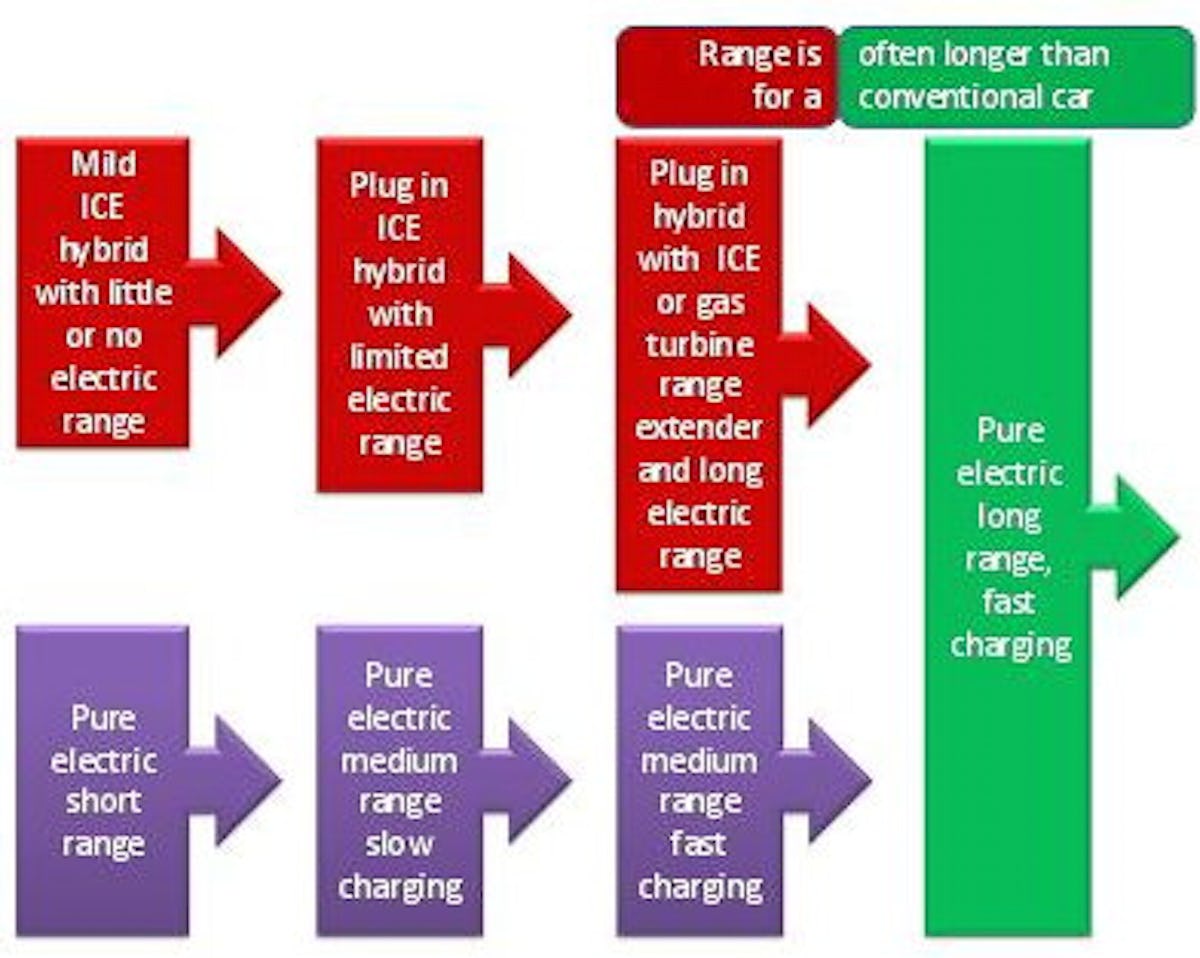 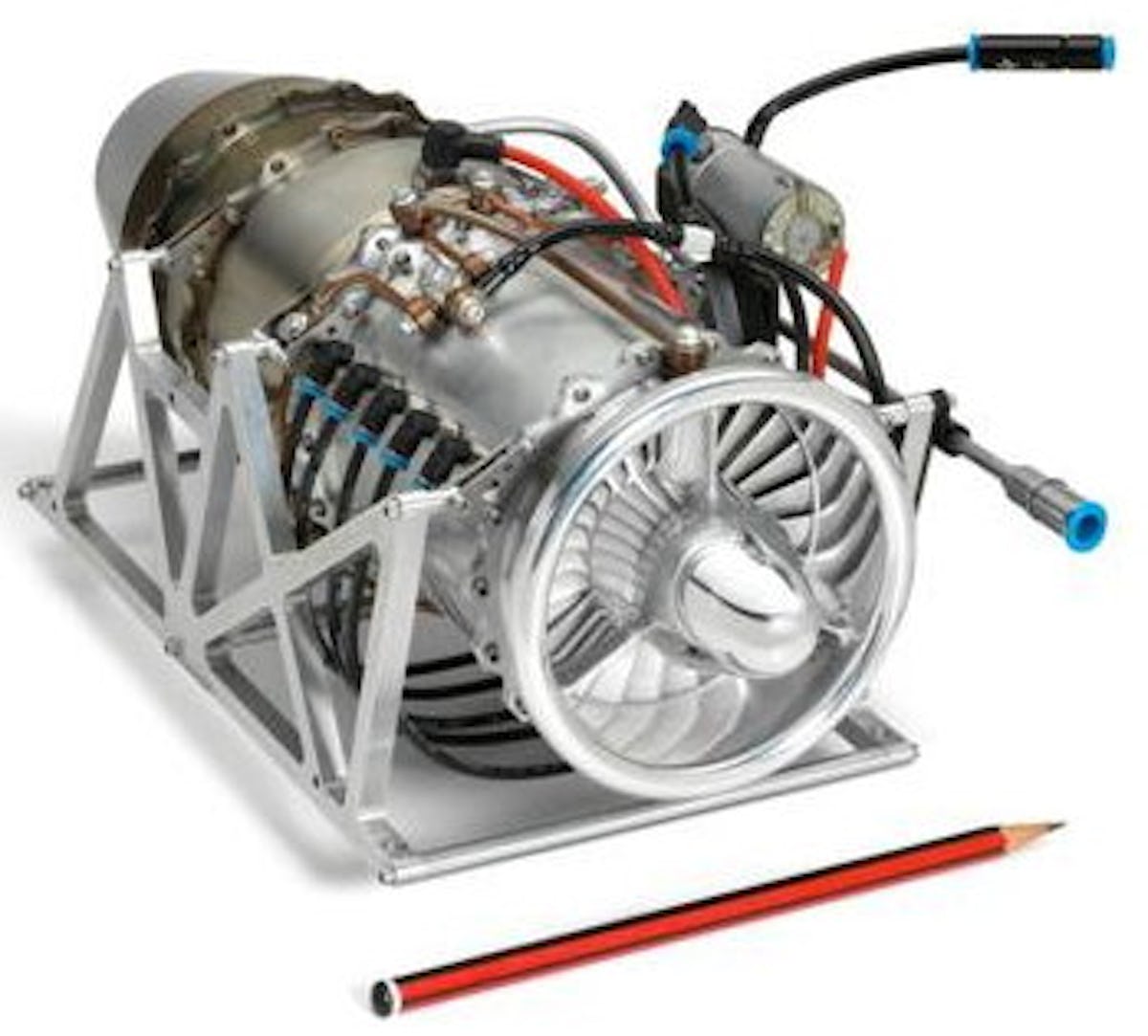 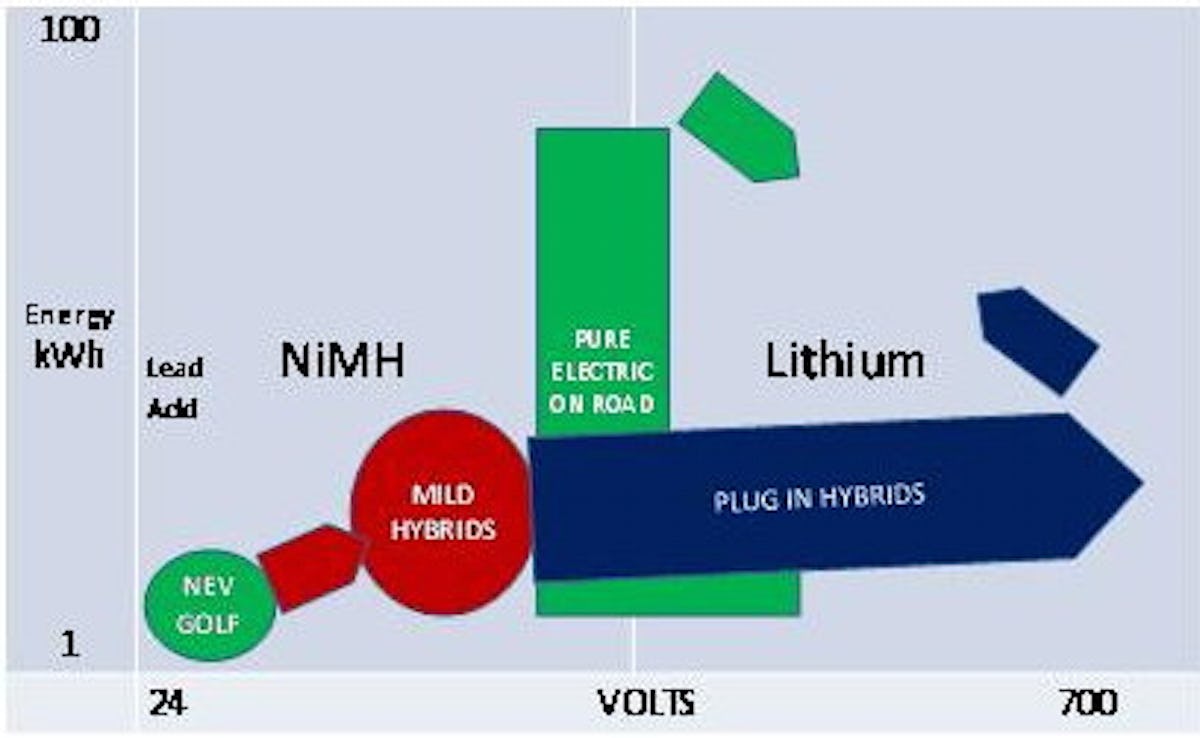