The Price-Sensitivity Curve for RFID

The Price-Sensitivity Curve for RFID

2006年8月23天 Dr Peter Harrop
Lately, some RFID tags have been sold at high profit and others literally given away. Yet more have been sold at a considerable loss by operations of doubtful viability and all this conspires to make it seem that there is no obvious price-volume sensitivity curve for RFID tags. However, some numerate view is essential for those planning to sell equipment making RFID tags, those making the tags themselves and those intending to use them. Fortunately, clarity is possible if we simplify the problem.

First consider the overall situation. In IDTechEx projections for the next ten years, the average tag price expected is illustrated in the diagram below. This includes active and passive tags of all shapes and sizes and among the passive tags are ones that cost up to $8 each to meet very high military and aerospace requirements. At the other extreme, it includes some tags printed directly onto products and packaging in 2016. The dashed line is a rough indication of the lower limit of price by year and quantity, excluding giveaways and highly loss-making commitments. For example, a shakeout is due among those supplying highly loss-making straps, inlets and labels for pallets and cases. 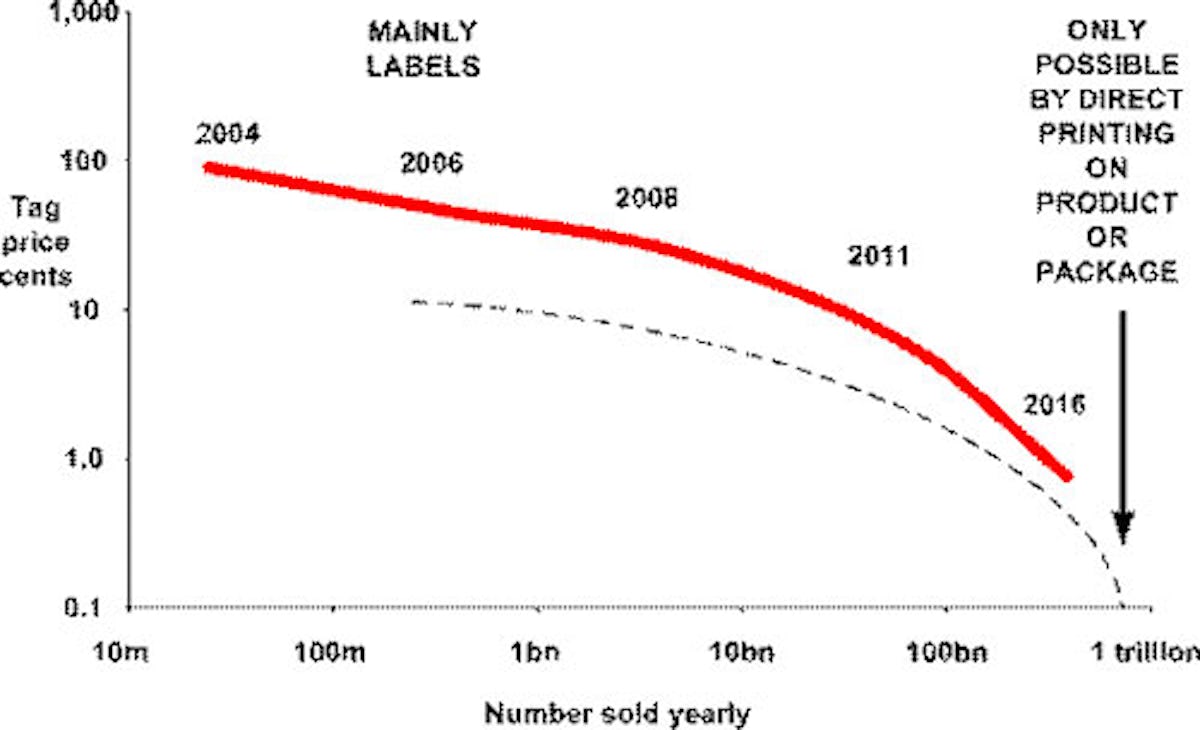 Source IDTechEx
The price-volume sensitivity for RFID in the form of high-volume labels is lower than the all-embracing curve shown above. This is because labels address the more price sensitive markets in the main, these being the ones with potentially the highest volumes. However, the price-volume curve for high-volume RFID labels should be no lower than for anti-theft EAS labels for reasons we shall give below.

To establish the price-sensitivity for RFID label production, we must exclude systems where the tag cost is the minor part of cost of ownership of the RFID system. In such cases, the tag cost has only a second order effect on sales. That leaves most of the high volume applications. Secondly, we must recognize that there will be a spread of possible outcomes. Even up to very high volumes, organizations will be fitting RFID for very different reasons - often ones that are difficult or impossible to quantify. For instance, Philip Morris and the China National Tobacco Monopoly together ship 63 billion packets of cigarettes yearly and dearly want RFID, primarily for anti-counterfeiting. At what price? It depends how they do the calculation.
Another reason for a spread of price-volume curves lies in the fact that legislation, mandates and pressure from organizations such as the Food and Drug Administration (FDA) encourages adoption before the tipping point of price in certain applicational sectors. Excessive competition in certain sectors also distorts the situation.

Where are we headed? There will be a rather even distribution in value (not numbers) of item level RFID tag sales between the main applications in 2016 as shown below. Some will be on a trajectory of relatively high price, tough specification such as military and some the opposite. For example, military tags will average $9 for 2006, this encompassing active tags for tens of dollars and passive tags for pallets and cases at much less. Then there's intermodal containers - all active - starting at $29 average in 2006. Smart cards - all passive - start at $2.2 average in 2006 and vehicle tagging at $9.5. However, most active tags are in systems where the tag cost has little influence on numbers sold because it may be only 20% of cost of ownership.

Source IDTechEx
IDTechEx has plotted an envelope which encompasses individual trajectories for given product families such books or drugs. Mainstream postal items and low priced consumer goods have the lowest price trajectories. By contrast, there may be around three billion drug packages shipped in 2011 with RFID labels at around seven cents. Given the compelling paybacks already demonstrated by the British and Japanese, there may be as many as ten billion high priced retail goods, such as apparel, tagged in 2011 but only if work in China and elsewhere gets the label price down to around 3.4 cents. However, the uncertainties are such that many of these numbers could be halved but the price doubled. The IDTechEx projections for each category are given in the new report Item Level RFID Volume One - Forecasts 2006-2016, Technology, Standards. The overall price-volume sensitivity envelope is shown below. 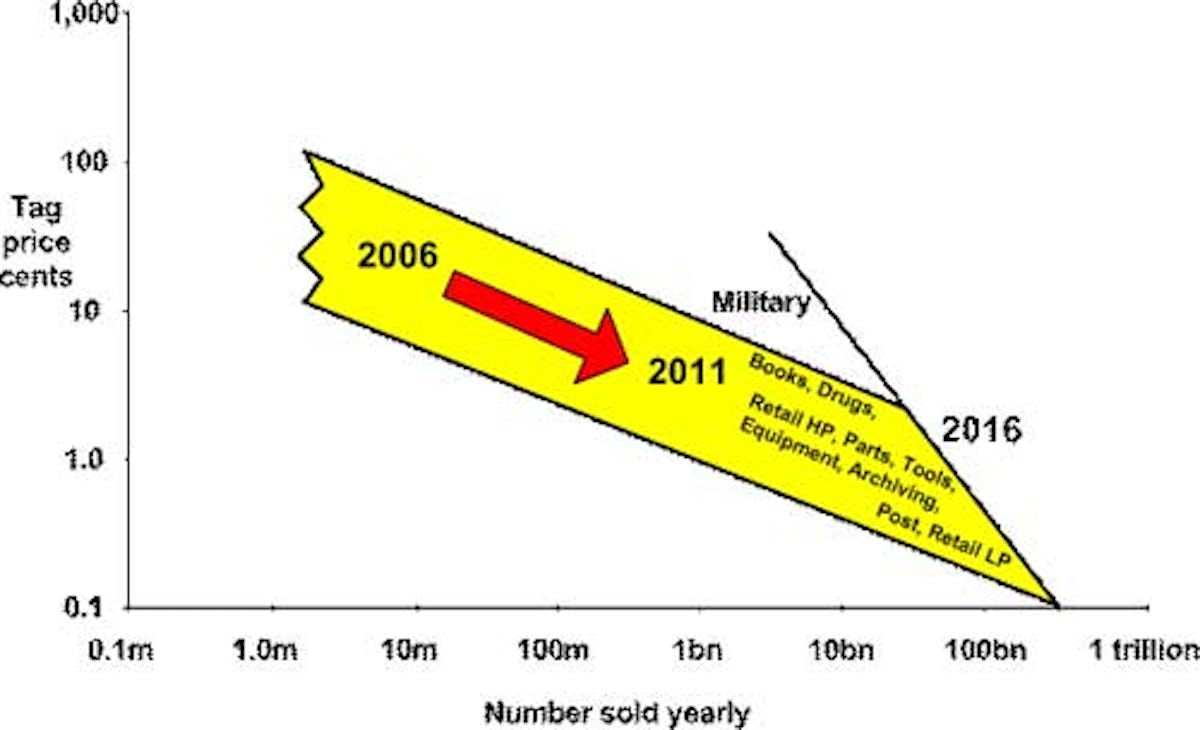 We can do something of a cross check of the above price sensitivity envelope by considering EAS anti-theft labels. These have already sold in much larger numbers than RFID labels. The single payback on these anti-theft labels is inferior to the multiple paybacks for most RFID labels, particularly for the largest RFID markets, which are at item level. Therefore RFID label sales should bear a similar or higher price for a given volume. Indeed, RFID label selling prices are often additionally driven by safety and security benefits not relevant to anti-theft labels.
For anti-theft labels on items, we reached the current global consumption of ten billion labels yearly when cost dropped to one to five cents. Earlier, it was a one billion yearly unit market at five to eight cents. These points actually come within our above envelope for RFID, showing that we are not being over-optimistic about the prices that can be reached with RFID labels in volume uses where the label is a major part of cost of ownership of the system.
For more read the double report new this month Item Level RFID - Forecasts, Technology, Standards.
Attend the IDTechEx conference, RFID Europe 2007 www.idtechex.com/rfideurope. Dedicated track for "Item Level RFID".
PrintForwardTweetLikePinredditShare
Previous
Next