2012年8月3天 Dr Harry Zervos
Although thermoelectric phenomena have been used for heating and cooling applications quite extensively, electricity generation has only seen very limited market in niche applications and it is only in recent years that interest has increased regarding new applications of energy generation through thermoelectric harvesting. According to IDTechEx, this growth in interest will continue and will be characterized by an overall market for thermoelectric energy harvesters that will reach $750 million by 2022.
Details on the technology and its forecasts for growth can be found in the IDTechEx report Thermoelectric Energy Harvesting: Devices, Applications & Opportunities 2012-2022

The principle phenomenon that underpins thermoelectric energy generation is known as the Seebeck effect: the conversion of a temperature differential into electricity at the junction of two materials. The conversion process is reversible, i.e. when a thermoelectric generator is connected to a power supply it acts as a cooler/heater according to the underlying physical principle, the Peltier effect. The Peltier effect stipulates that electrical power input into a junction of two different materials leads to the creation of a temperature difference. For that reason, thermoelectric coolers are also known as Peltier coolers or Peltier modules. The Peltier and Seebeck effects are illustrated in the picture below.
Fig. 1.1 Representation of the Peltier (left) and the Seebeck (right) effect 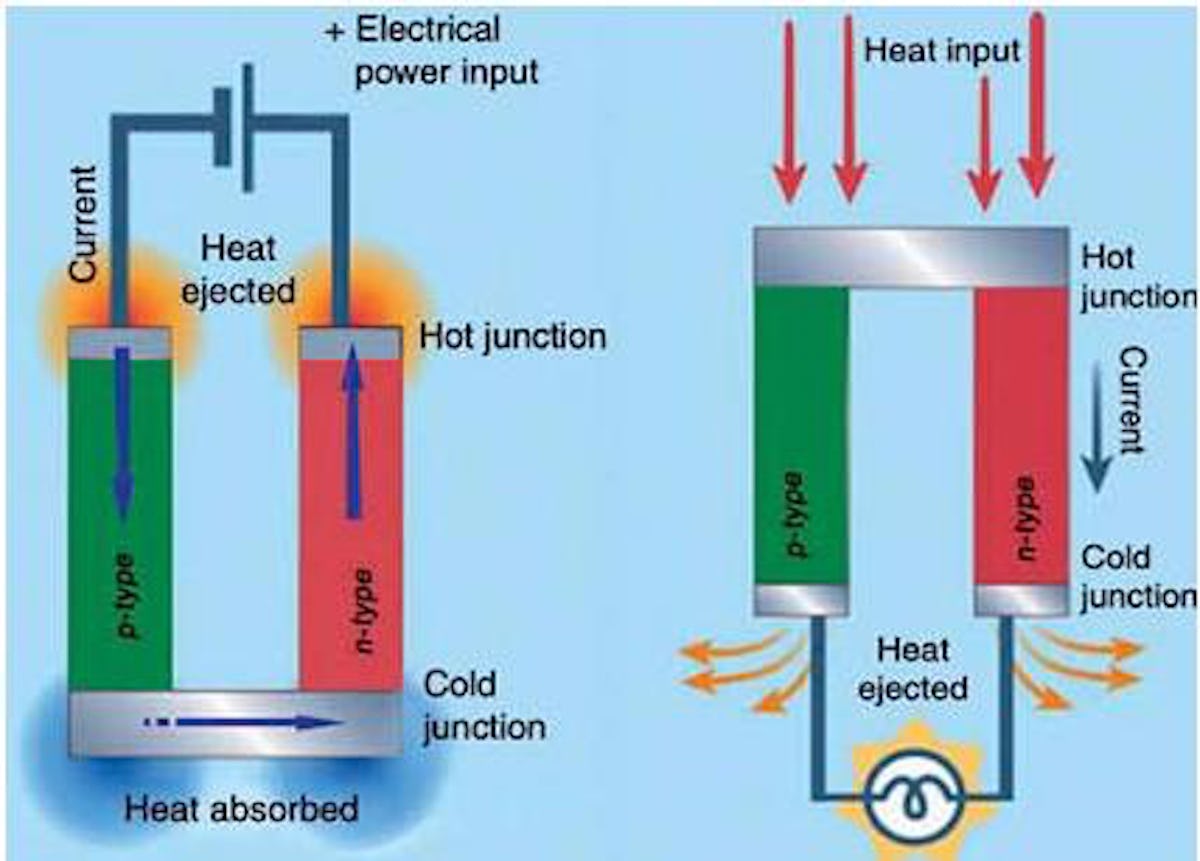 Looking into some of the more substantial markets that will support the forecasted growth in the next decade, some of the main points that arise are:
Wireless sensors powered by thermoelectric generators in environments where temperature differentials exist would lead to avoiding issues with battery lifetime and reliability and lead to an increase in wireless sensor network implementations. It would also lead to the ability to move away from wired sensors, which are still the solution of choice when increased reliability of measurement over prolonged periods of time is necessary. Some applications have low enough power demands to operate with small temperature differentials, as small as a few degrees in some cases. Some other segments on the other hand are characterized by extreme temperature differentials but at the same time, have very stringent safety requirements which could lead to long development times -e.g. condition monitoring of turbine blades while in-service. These varying kinds of considerations pertaining to different segments demonstrate the versatility that needs to be demonstrated by the technology developers in order to capture available opportunities in different verticals.
A large number of car companies, including Volkswagen, VOLVO, FORD and BMW in collaboration with NASA have been developing thermoelectric waste heat recovery systems in-house, each achieving different types of performance but all of them expecting to lead to improvements of 3-5% in fuel economy while the power generated out of these devices could potentially reach up to 1200W. This type of application has great potential, even with the advent of vehicle electrification which would take several decades and would not entirely substitute internal combustion engine vehicles in the immediate future. At the same time, due to the high temperature tolerances necessary for waste heat recovery systems, a lot of work is going into the development of the correct type of material systems, interconnects, etc. Again, the critical safety characteristics that need to be fulfilled in order to see widespread adoption of such technology in vehicles along with demands for low cost solutions lead to longer adoption cycles by the automotive industry.
In these applications, the type of solution that thermoelectric generators provide varies: it could be related to saving energy when cooking by utilising thermo-powered cooking sensors, powering mobile phones, watches or other consumer electronics, even body sensing could become more widespread with sensory wristbands, clothing or athletic apparel that monitor vitals such as heart rate, body temperature, etc. Developments in material and device design have led to thermoelectric devices on flexible substrates that allow for innovation in form factor that could allow for seamless integration in different products.
In the meantime, military and aerospace applications have already become a market of several million dollars, having supported mature thermoelectric harvesting technologies for several decades now (e.g. radioisotope thermoelectric generators in space probes, satellites, etc.). These are purely performance driven applications in a segment where cost considerations are not as important as the ability to efficiently and reliably provide power when needed most, in hostile, remote environments and applications. Even some terrestrial applications have seen adoption of thermoelectric generator technologies, with one of the more interesting examples being the installations by Global Thermoelectric, a company that has fitted thermoelectric generators worldwide in remote locations such as oil or natural gas pipelines, wells, offshore platforms, etc.

The figure below outlines the way the market for thermoelectric generators is expected to grow in the next few years, and clearly shows how the interest in wireless sensor applications is going to spearhead the growth of a new niche market for these types of generators from 2015 onwards. Interest in consumer applications will also increase but the dominant market will remain that for bespoke military and aerospace applications.
Fig. 1.2 Forecasts for growth in the thermoelectric generators market to 2014 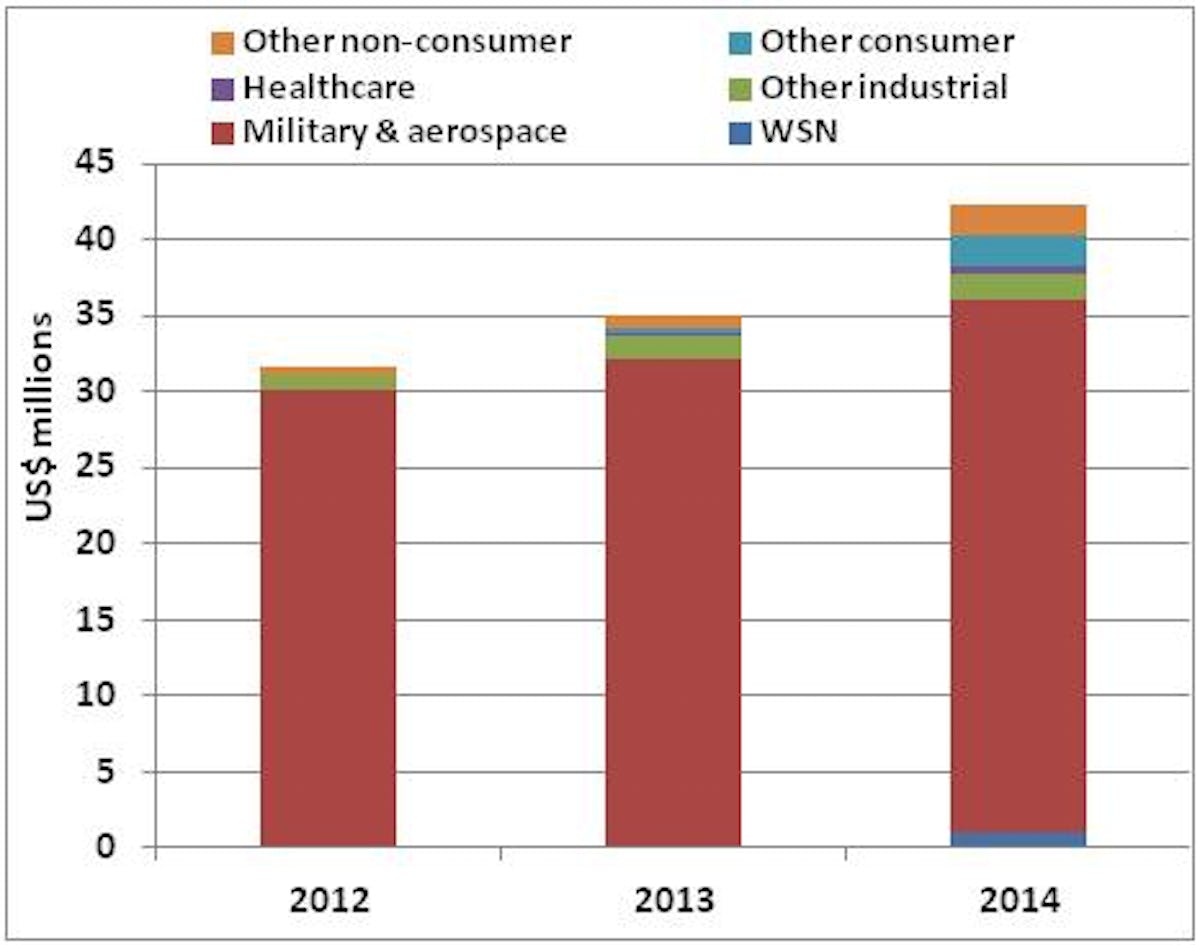