Fuel Cells Are Not the Problem, the Hydrogen Fuel Is

Fuel Cells Are Not the Problem, the Hydrogen Fuel Is

2022年2月14天 Dr David Wyatt
On the face of it, 2021 was a good year for fuel cell electric vehicles (FCEV) in passenger car markets. Toyota, with their second generation Mirai FCEV, and Hyundai, with their NEXO FCEV, both had record sales, which largely made up for Honda announcing in June 2021 that it had decided to pull the plug on production of their Honda Clarity FCV (citing the lack of hydrogen infrastructure and weak demand).
For both Toyota and Hyundai, the increase in sales makes for impressive reading. The release of the second gen Mirai, saw Toyota's global fuel cell car sales more than triple, from 1,770 vehicles in 2020 to 5,918 in 2021, and eclipse their previous best sales year in 2017 when they sold 2,741. Similarly, for Hyundai, they built on a strong 2020, where they sold 6,781 fuel cell NEXO, increasing sales by 42% to 9,620 vehicles in 2021.

Toyota and Hyundai Fuel Cell Passenger Car Sales. Source: IDTechEx
At face value, this seems positive for the fuel cell industry. But when you look closer at the drivers for this growth, it shows the lengths to which Toyota, Hyundai, and the governments supporting the rollout of fuel cell vehicles are having to go to build this momentum.
For example, in California, the Mirai was reportedly available at a 65% discount from its $50k+ list price. With Toyota offering a $20k discount in addition to US federal and state-level tax incentives totaling a further $12.5k, the Mirai was available in the US in 2021 for a shade under $18k. To sweeten the deal further, Toyota also offered a $15k fuel credit for the first three years of operation. A $50k car for less than $20k with 100,000 kilometers of free fuel is undoubtedly an appealing deal.
It is a similar story for Hyundai. Of the 9,620 Hyundai NEXOs sold globally in 2021, 88% were in South Korea. South Korean national and state incentives in 2021 meant the sale of each $60k NEXO was supported with a subsidy provision of around $30k. An attractive 50% discount. It is hard to envisage how such support is viable for any sustained period.
What the deployment of Mirai and NEXO vehicles is doing is demonstrating that the use of proton-exchange membrane (PEM) fuel cells in automotive applications is technologically sound (although Hyundai did recall 15,000 NEXO in August 2021 to fix a rattling problem). PEM fuel cells, using pressurized gaseous hydrogen as fuel, can deliver a greater range and quicker refueling time than equivalent battery electric vehicles. However, for FCEVs, it is not the fuel cells, nor the lack of hydrogen refueling infrastructure (although this too is poor), that is the main problem - it is high emissions and cost of the hydrogen itself.

The recent report from IDTechEx, "Fuel Cell Electric Vehicles 2022-2042", contains an analysis of the gCO2/km well-to-wheel emission of fuel cell and battery electric vehicles, referencing it against the tank-to-wheel emission of current combustion engine cars. Like electricity generation, the production of hydrogen (H2) has a carbon emission footprint. Low carbon green hydrogen is produced by the electrolysis of water. Electrolysis requires around 50kWh of electricity to produce 1kg of H2, so the carbon footprint of H2 produced via electrolysis is primarily tied to the carbon intensity of the electricity used. Produced using 100% renewable electricity, green H2 can provide an extremely low carbon fuel.
The problem is green H2 is not yet produced in any great volume and when produced it is comparatively expensive. The vast majority (~95%) of today's hydrogen is generated by the steam methane reforming of natural gas, a process that is cheaper but results in significant CO2 emission. This 'grey H2' has an emission footprint of around 10.9 kgCO2/kgH2.
Toyota gives the new Mirai fuel consumption at 0.86 kgH2/100km, so running on grey H2 the Mirai emits around 94 gCO2/km, whilst the NEXO (1 kgH2/100km) emits around 109 gCO2/km. These figures are only a marginal improvement on the CO2 tailpipe emissions of modern combustion engines. For all those eco-minded individuals who have purchased FCEV cars, they can relax in the knowledge that their zero-emission on-road (only water and heat) is improving local air quality, but on saving the planet there is still a way to go. The conclusion is that to be truly 'green' fuel cell vehicles need green H2. 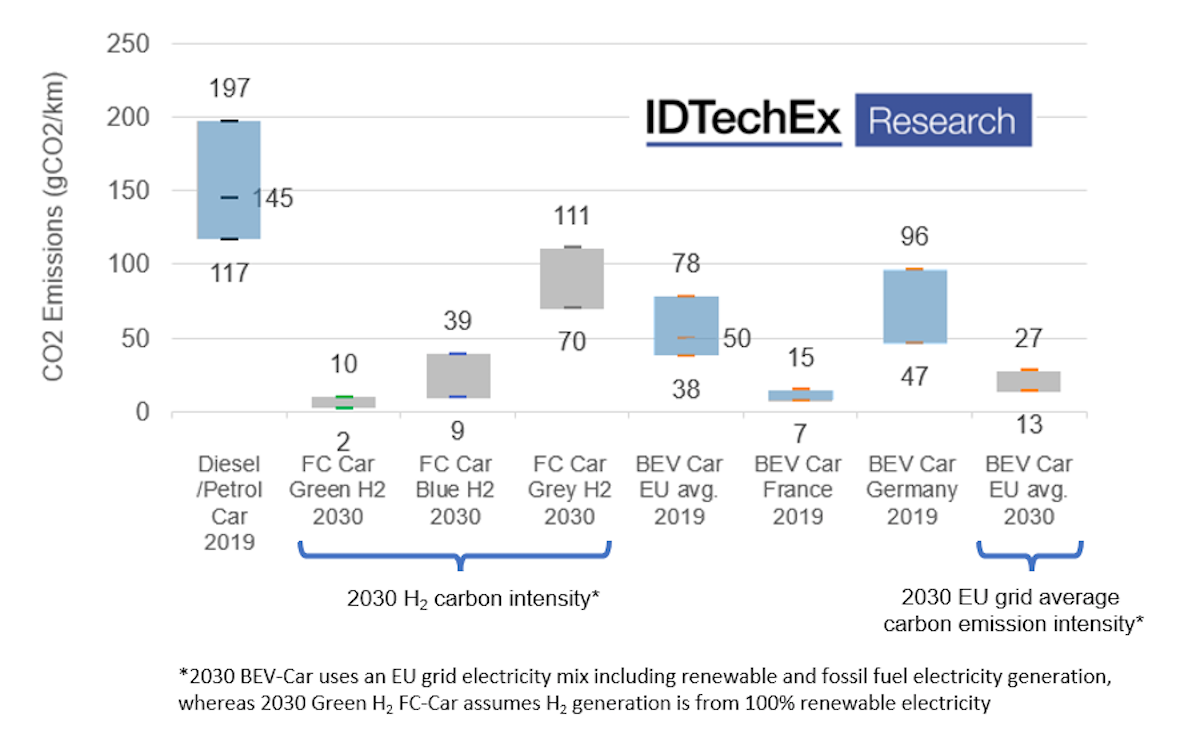 In January 2022, the City of Montpellier, France made the decision to cancel an order for 51 hydrogen fuel cell buses instead opting for electric ones, scrapping the 29-million-euro ($33 million USD) Montpellier Horizon Hydrogène project. In collaboration with EDF subsidiary Hynamics, the intention had been to construct a 2MW electrolyzer with hydrogen storage, powered by 2.8MW of photovoltaics, to generate 800 kg of green hydrogen per day for the bus fleet. However, reviewing the finances for the project the conclusion was reached that the operating cost of the fuel cell buses would have been 0.95 euros ($1.08) per km in comparison to 0.15 euros ($0.17) per km for battery electric. The hydrogen buses would have been six times more expensive to operate, costing 3 million euros per year compared to 500k euros per year for the battery buses.
A source of cheap green H2 will be critical for the success of fuel cell vehicles. It is a brave government that commits to large public spending to support the purchase of fuel cell vehicles on the promise that one day the fuel will be available to make them low emission. Green hydrogen production is undoubtedly a huge opportunity for companies willing to invest, though there are substantial production and distribution challenges to overcome to make H2 a cost-effective zero-emission automotive fuel. For the OEMs who have been developing fuel cell vehicles for the past 30-years, volume production of cheap green hydrogen cannot come soon enough, they needed it yesterday.
To learn more, IDTechEx's new report "Fuel Cell Electric Vehicles 2022-2042" explores the current state of fuel cell vehicle development for passenger cars, light commercial vehicles, trucks, and city buses. The report discusses the technical and economic aspects of fuel cell deployment in these different transport applications and presents IDTechEx's independent 20-year outlook for the future of fuel cell vehicles.
The Fuel Cell Electric Vehicles report is part of IDTechEx's broader mobility research portfolio, tracking the adoption of electric vehicles, battery trends, autonomy, and demand across land, sea, and air. Helping you navigate whatever may be ahead. Find out more at www.IDTechex.com/en/research/future-mobility-subscription.
IDTechEx guides your strategic business decisions through its Research, Subscription and Consultancy products, helping you profit from emerging technologies. For more information, contact research@IDTechEx.com or visit www.IDTechEx.com.
PrintForwardTweetLikePinredditShare
Previous
Next