2010年12月3天 Raghu Das
The fourth annual printed electronics winners were announced on Dec 1st at the IDTechEx Awards Dinner in Santa Clara, USA. The awards recognize outstanding progress in the development and commercialization of printed electronics, an industry that produces a huge amount of technical innovation which will be used in many products.
The entries were judged by an eminent panel comprising of Dr Steven Novack, Idaho National Laboratory (INL), USA; Professor Iain McCulloch, Imperial College London, UK and Professor Vivek Subramanian, University of California, Berkeley, USA.
The award ceremony is part of the IDTechEx event Printed Electronics USA 2010 - which was attended by over 1200 people from 28 countries - the world's largest event on the topic.
In summary, the winners for each category are as follows: 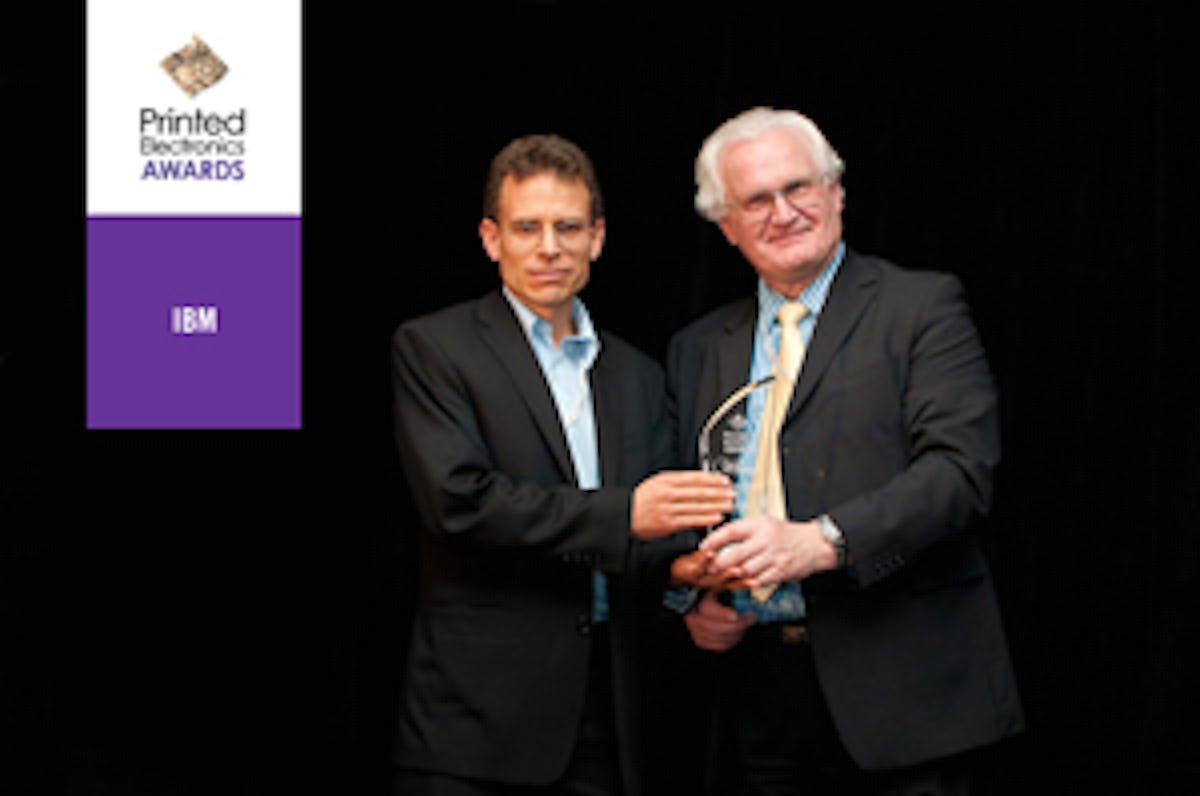 Thin-film chalcogenide-based solar cells provide a critical pathway to cost parity between photovoltaic and conventional energy sources. Currently, only CIGS and CdTe technologies have reached commercial module production with stable power conversion efficiencies of over 10%. While promising, these technologies employ relatively rare indium or tellurium (gallium is also expensive), or the heavy metal cadmium.
Cu2ZnSn(S, Se) 4 (CZTSSe) kesterites have been examined as potential lower-materials cost and more earth-abundant alternatives for the two leading technologies. While previous attempts to deposit films of the kesterite have led to power conversion efficiencies of as high as 6.8%, the IBM team has won this award due to achieving 9.7% efficiency, 40% better than the previous world record and close to a value that could be considered interesting for commercialization.
The demonstration of power conversion efficiencies of close to 10%, coupled with readily available elements and a low-cost liquid-based deposition approach, has positioned CZTSSe as a prospective major player in the PV field and an attractive potential alternative to CIGS and CdTe.
One judge commented, "Thin film PV needs to approach a market barrier to make it viable for commercialization. IBM's advancement, outlined in the Printer Electronic Awards submission, provides evidence that Thin film PV is closing the gap to achieve commercialization." 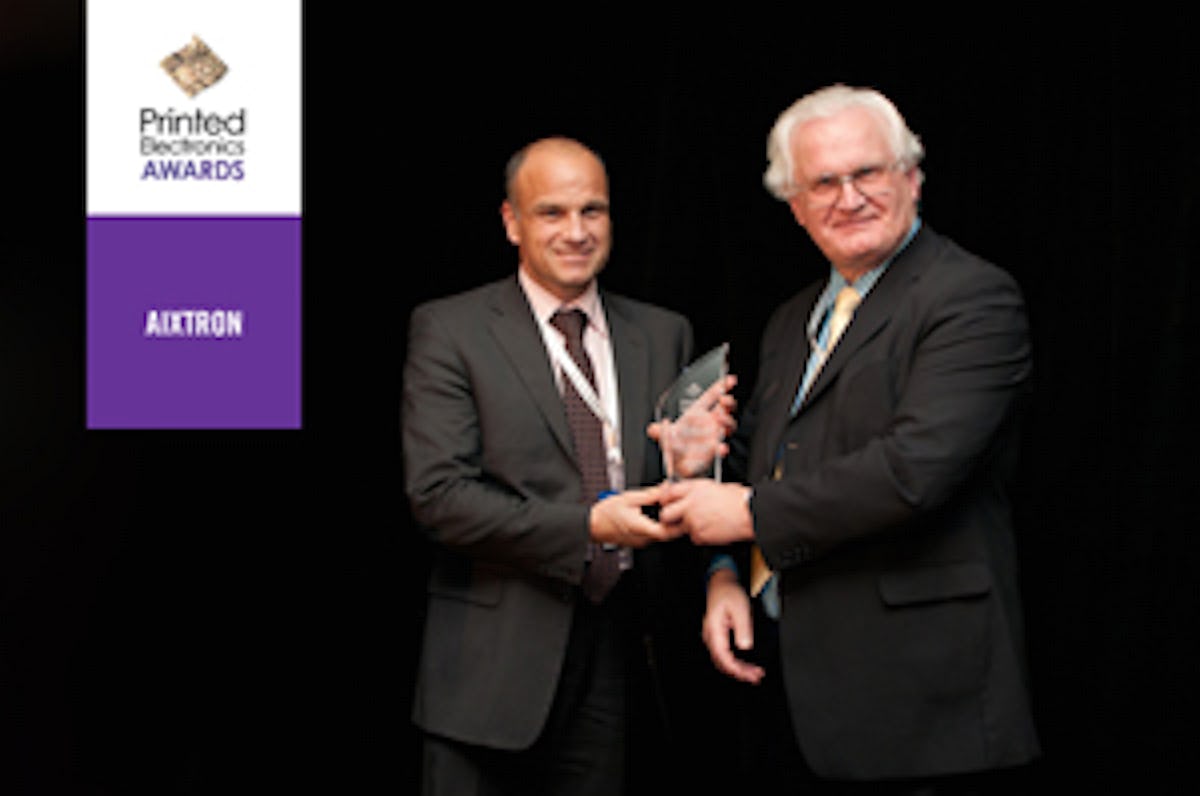 AIXTRON wins this award for its OVPD Vapor Phase Deposition Equipment for small molecule organic materials, which is scalable and is helping to bring OLED lighting to market. The intrinsic advantages of this technology, exclusively licensed from Universal Display Corp. have made OVPD technology compelling for advanced OLED manufacturing, when high deposition rates, highest material utilization, and precise composition control are of paramount importance.
This all-dry process inherently avoids augmented limitations of wet based processes such as surface tension effects, insufficient contour conformity, limited control over layer composition, limitations in controlled co-polymerization, limitations regarding scalability et al.
Systems have been realized for R&D and production lines alike. One judge commented, "The unique vacuum process to enable OLED lighting is a significant advancement to aid in replacing inefficient incandescent lighting". 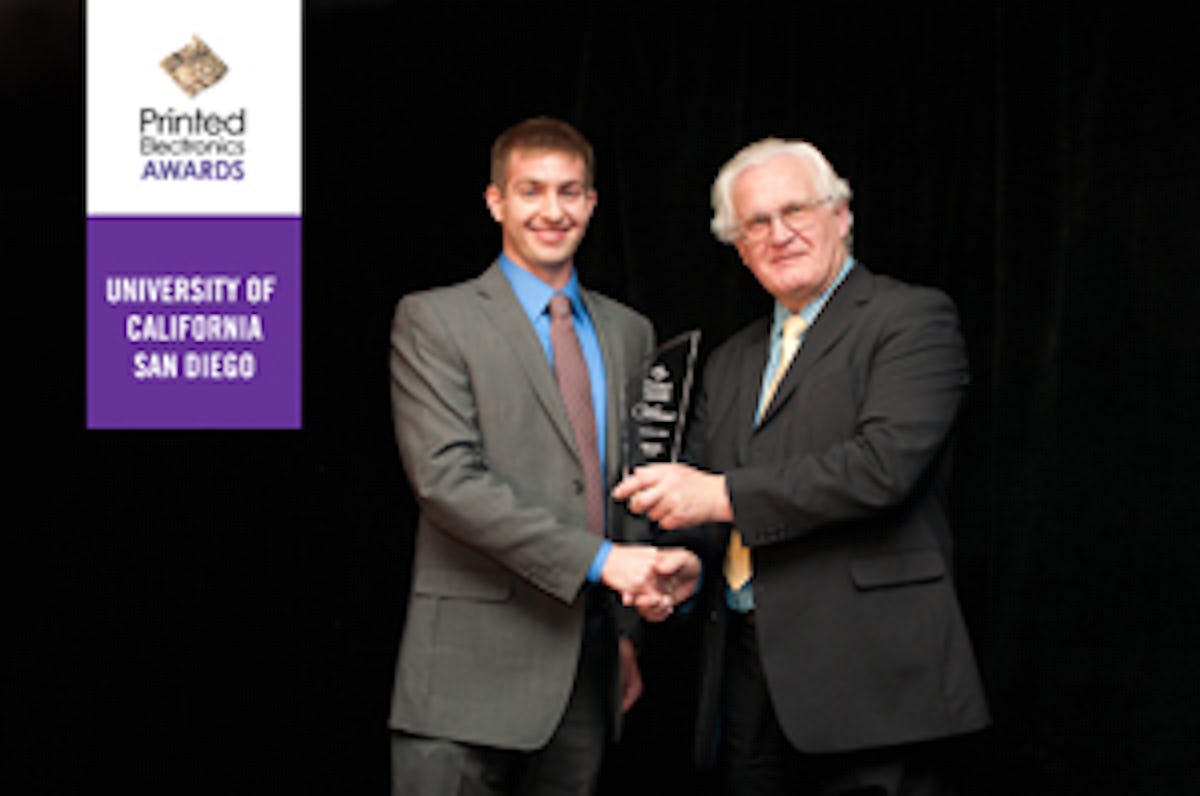 The University of California, San Diego won this award for its work on textile based printed bioelectric sensors. The University fabricated thick-film (screen-printed) amperometric sensors that were printed directly onto the elastic waist of undergarments for physiological monitoring. Additionally, they demonstrated the highly sensitive detection of trace concentrations of explosive agents using screen-printed sensors on GORE-TEX®fabrics. The University reports, "Our research has demonstrated the feasibility of employing screen-printed biosensors for a number of utilitarian applications leading to the realization of a new class of wearable biosensors that enables a "wear and forget" paradigm." 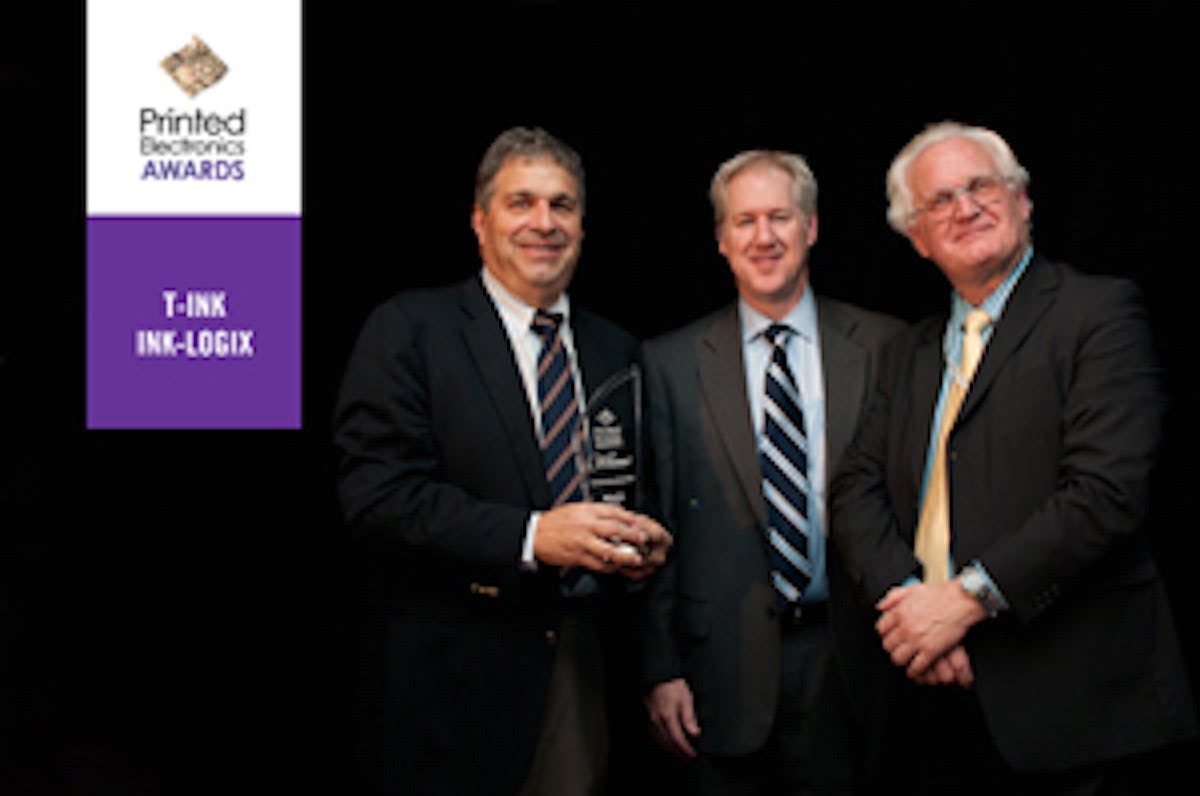 T-Ink/ Ink-Logix are introducing a unique and innovative approach to creating a three dimensional "Smart Plastics" product. "Smart Plastics" can be defined as a product that incorporates printed capacitive sensor/switch technology and film insert moulding techniques to generate a highly styled and decorative plastic touch switch panel available for use in automotive, white goods, consumer electronics and other products.
With the addition of a control circuit and backlighting, the possibilities for the technology are very exciting. One judge commented, "This product uses smart plastics and represents an innovative advancement using novel thin-film printed electronics. It should have broad application to the consumer market." 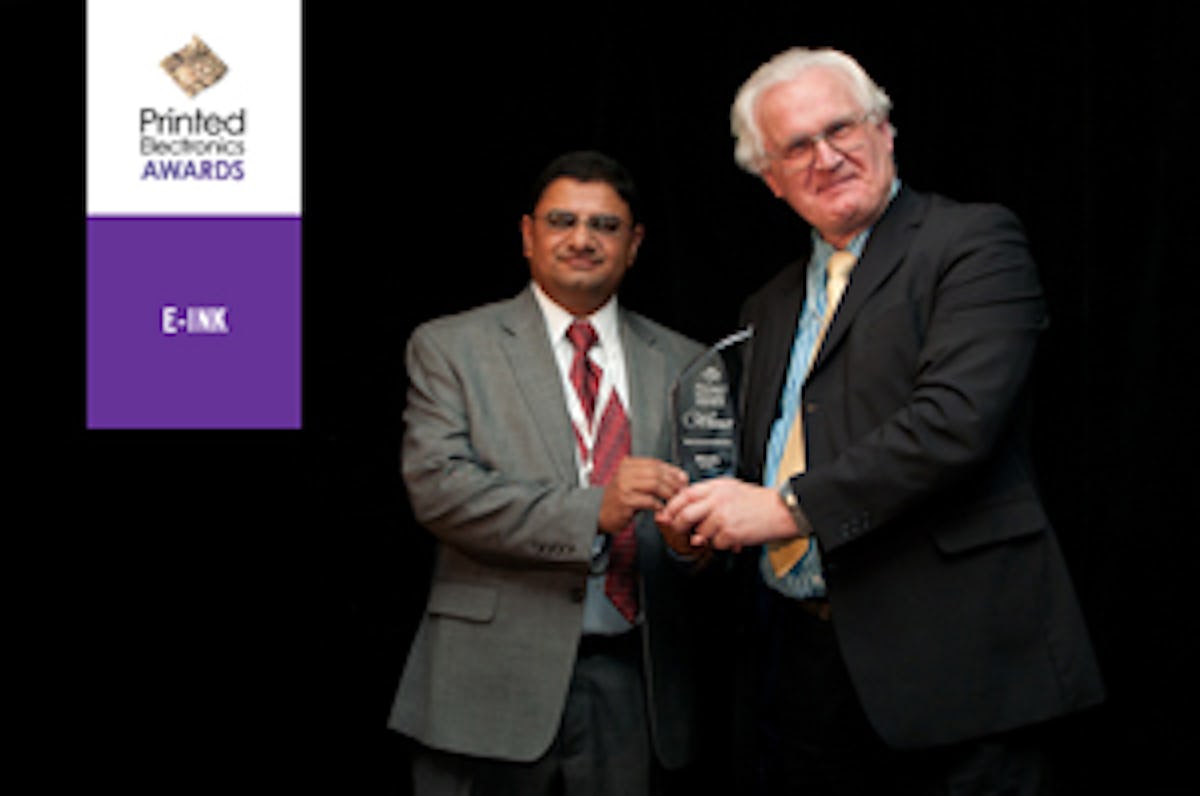 This award was given to the company that has demonstrated the most successful sales with a printed electronics technology. It is awarded to E Ink. E Ink created the multi-billion dollar e-reader market, supplying displays to major players like the Amazon Kindle, Sony Reader and Barnes & Noble Nook.
E Ink Pearl - the whitest reflective display in the industry - brings electronic paper performance to the next level. The contrast ratio is 50 percent greater than previous products. Text on Pearl "pops" from the page, just like reading text on printed paper. E Ink Pearl enables the latest e-readers, such as the Amazon Kindle DX made available in July 2010 and the Sony Reader released in September, to go from a contrast ratio typical of newspapers, to a higher contrast ratio typical of paperback books for enhanced readability even outside. With 16 gray level depth, Pearl also offers the sharpest image rendering. 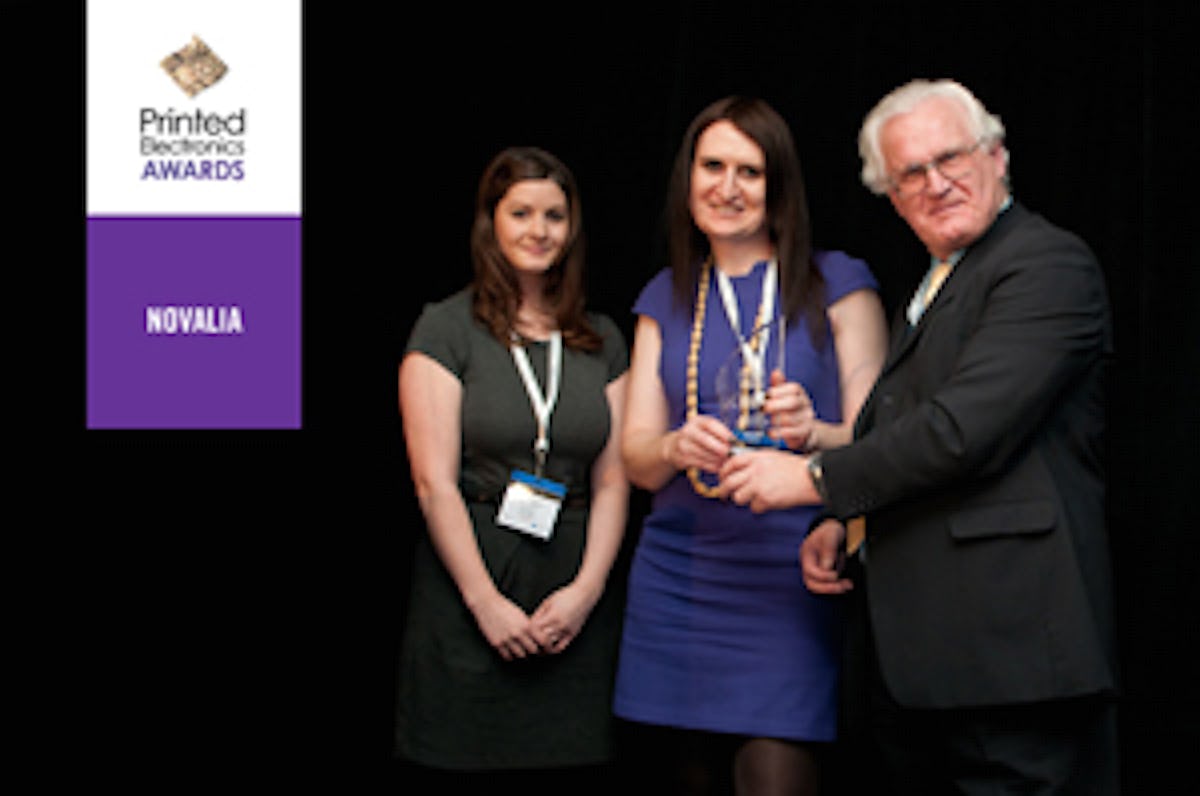 This award was chosen by attendees at the event, who voted for what they thought were the most impressive exhibitors. It was a joint tie and the winners are Novalia and NovaCentrix. 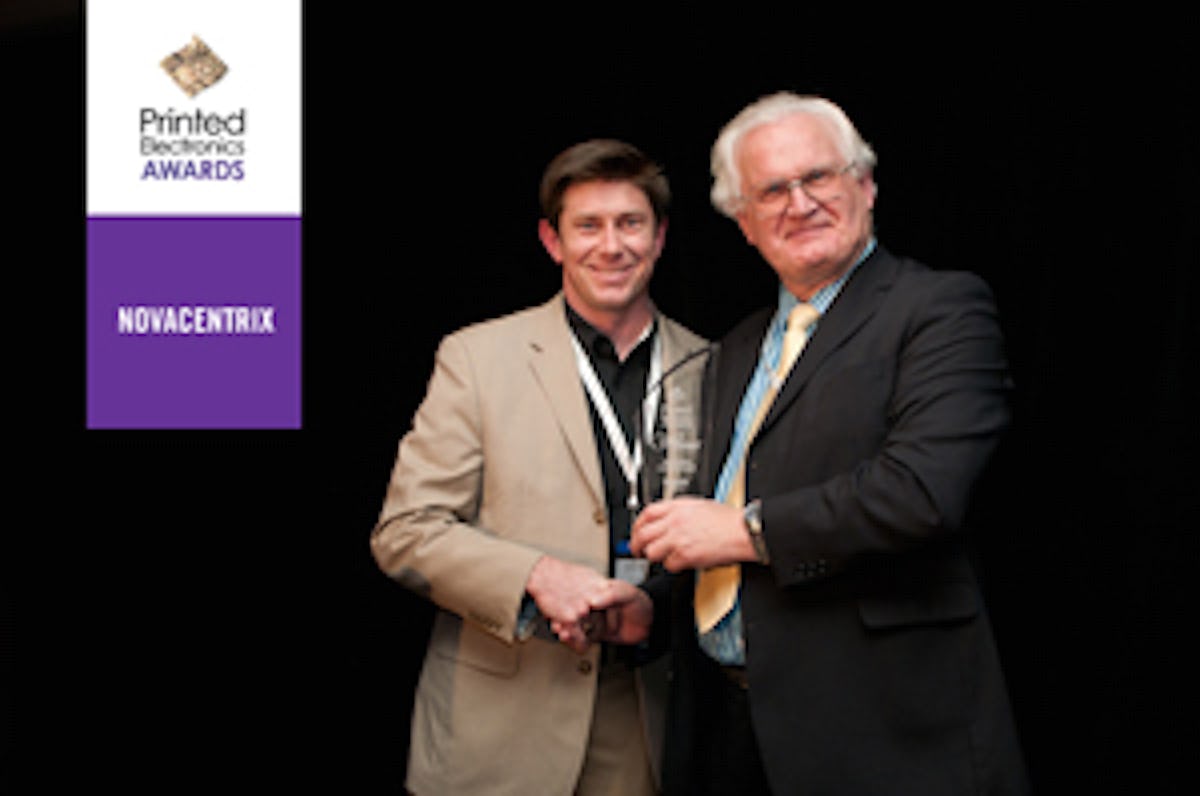