Nov 26, 2010 Farouk Balouchi
The IDTechEx exhibition with the only co-located conference on Energy Harvesting & Storage with Wireless Sensor Networks & Real Time Locating Systems saw an unprecedented 340 people attending and 28 exhibitors. Keynote speakers from the first day included Infinite Power Solutions who are one of the leading developer and manufacturer of solid state, rechargeable energy storage solutions for the next-generation portable powered devices, alongside Cymbet and others attending the Conference. Joe Keating spoke of the need for a combined energy harvesting, storage and energy management solution for the arrival of the self-power node market, including automotive applications of interest to BMW, Fiat, Nissan etc. Low leakage solid-state batteries are now available and generally fall into the low-power density and high-energy density category. The low-power density limitation is because of the difficulty of getting high currents across solid-solid interfaces. However, these batteries do have certain advantages that outweigh this disadvantage: they can be constructed in thin film form, and electrolyte leakage is not a problem. These technologies tend to have a very long shelf life because of their construction, and usually do not have any abrupt changes in performance with temperature, such as might be associated with electrolyte freezing or boiling.

During Joe Keating's talk he announced that major silicon providers had taken notice of the potential value in the energy harvesting market and said quite poignantly "Congratulations, Energy Harvesting has arrived!" Maxim & Linear Technology, two of the major silicon providers, have developed tools for evaluating energy harvesting technology with power management, signal conditioning incorporating the many enabling technologies such as IPS's thin film batteries. Plug & play vibration characterisation from Mide who also provide vibration harvesters, multi source vibration/solar harvesters and raw piezoelectric harvesters and EH electronics which covert raw piezo AC output to either unregulated or regulated DC with optional capacitive storage and active power conditioning. The convergence of all these products in the exhibitor's hall showed that the different vendors were integrating products from each other's catalogue to show the different configurations that are possible.
Microchip introduced a new class of MCU last year called XLP or eXtreme Low Power. These products are designed for low power systems and feature the world's lowest Run and Sleep currents of 34uA/MHz, and 9nA. Now, 18 months later, they have grown the family to 105 MCUs! 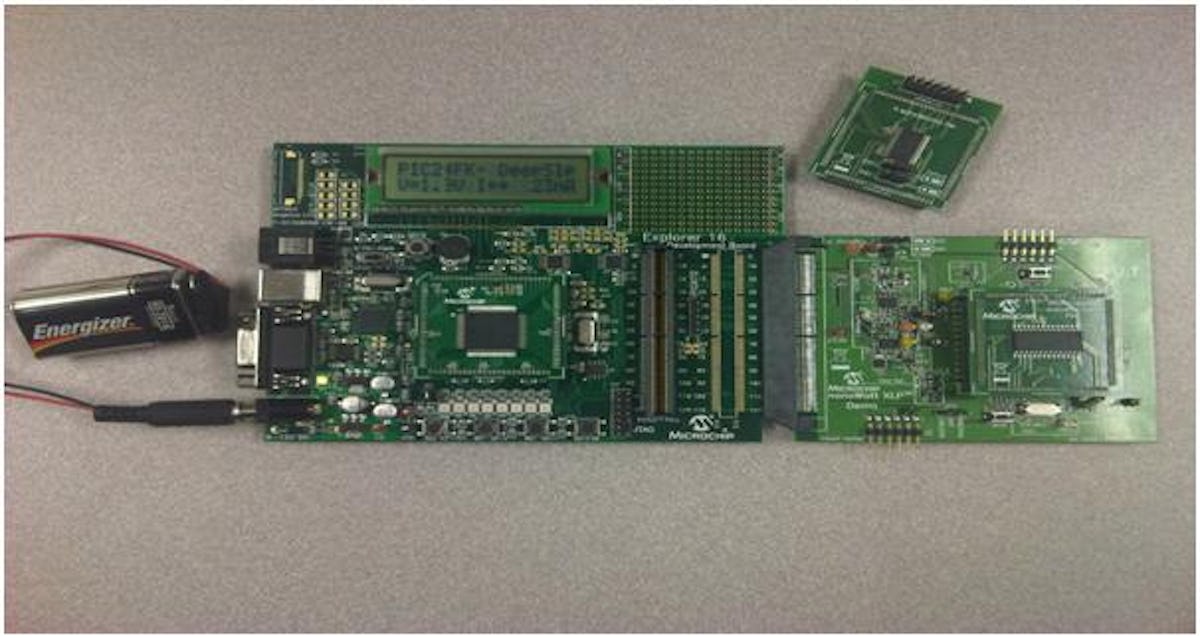 Microchip felt that it was important for people to see the current consumption because it is really difficult to dissect information in a datasheet. They created these demo features shown above, with a precision current measurement circuit. PIC MCU or a competitor's MCU can be place on the system and have the current consumption displayed on the LCD screen shown. The board comes with a demo to show sleep current, WDT, BOR or RTC current for Microchips MCU's and of their competitors. The system can also be modified to more closely resemble an application. www.microchip.com/xlp
While the sleep current is well known and accounts for more than 90% of the operation time, the run current associated with the RF accounts for 90% of the current consumed. Using a configurable protocol stack like MiWi allows customization which reduces execution time and power.

Microchip's latest radio is an ISM band radio for 868 and 915MHz frequencies that offers an extremely low 3mA receive current. The company also supports 433MHz with their MRF49XA radio and have an 802.15.4, 2.4GHz radio for supporting Zigbee; these come in three formats; chip level, module level with certified antenna, or PICtail for use with their XLP development boards.
Below is the XLP 16-bit Energy Harvesting Development Kit, developed in conjunction with Cymbet. Cymbet provided the Harvester, power management, and storage on this kit. One of the key things provided with the kit is energy conscious software. With a storage element like Cymbet's EnerChip, you need to know the state of charge, and the software tracks the charging and discharging of the EnerChips and displays the charge in the battery along with various sensor information from the board. This way the system designer can balance the harvesting of energy with the usage of energy and test this in many environments. This development kit can be expanded by adding RF PICkit modules, creating a completely wire free sensor. 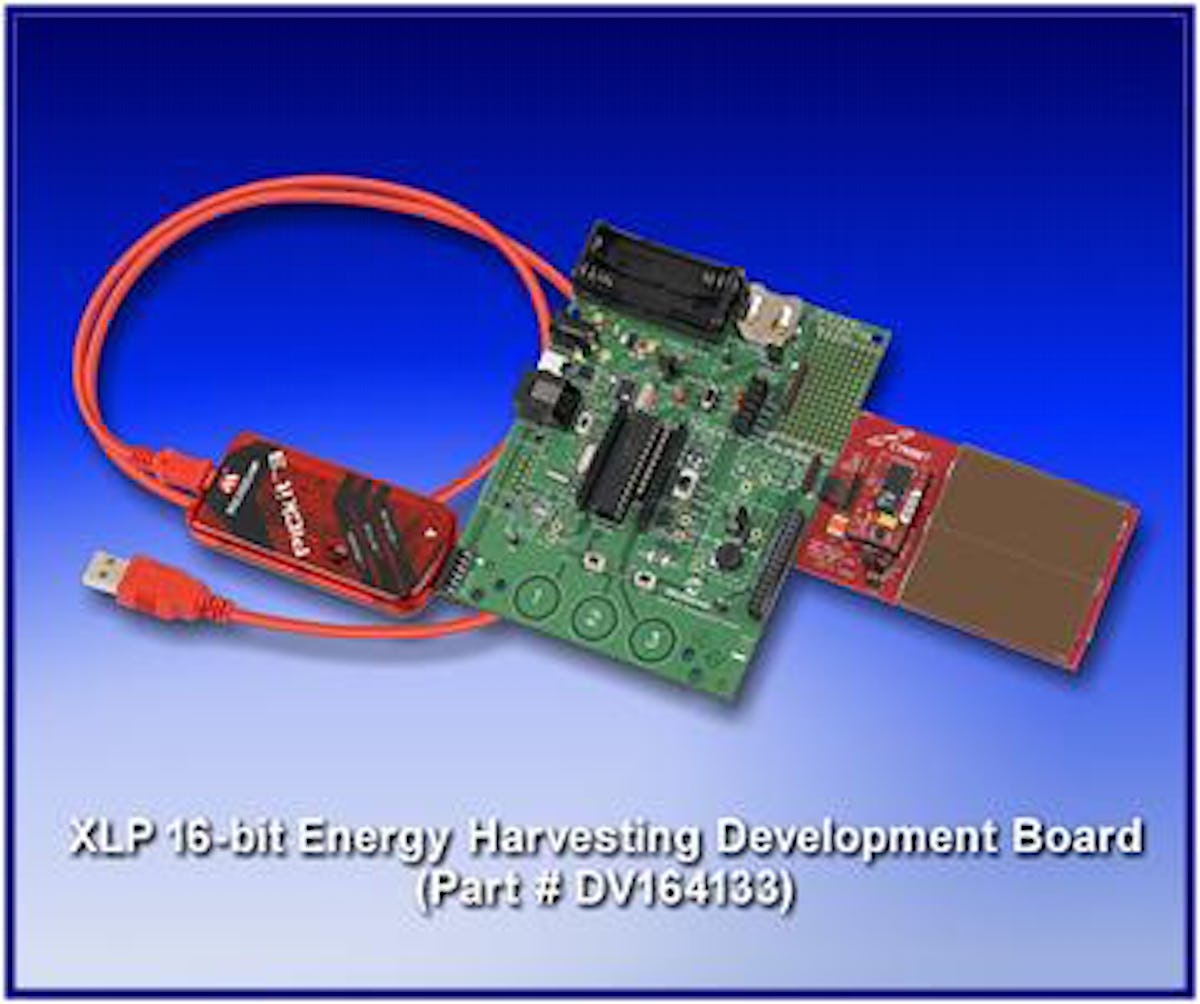 Another development kit sure to make a difference in the development time of energy harvesting products is the Powercast kit developed in conjunction with Microchip. Powercast manufacture the power harvester receiver. This device captures transmitted RF power and converts it for use by an MCU or other electronic device. This kit makes use of PICs with XLP, the MRF24J40 802.15.4 radio, and MiWi P2P protocol. The development kit allows for completely wire free operation. It transmits data from several sensors to a PC access point based upon the XLP 16-bit board.
The sensor modules operate at a distance of up to 40 feet from the transmitter without batteries of any kind. The kit also allows for development and prototyping of several sensors and chips with the transmitter, sensor modules, antennas, PC access point, and PICkit 3 programmer. 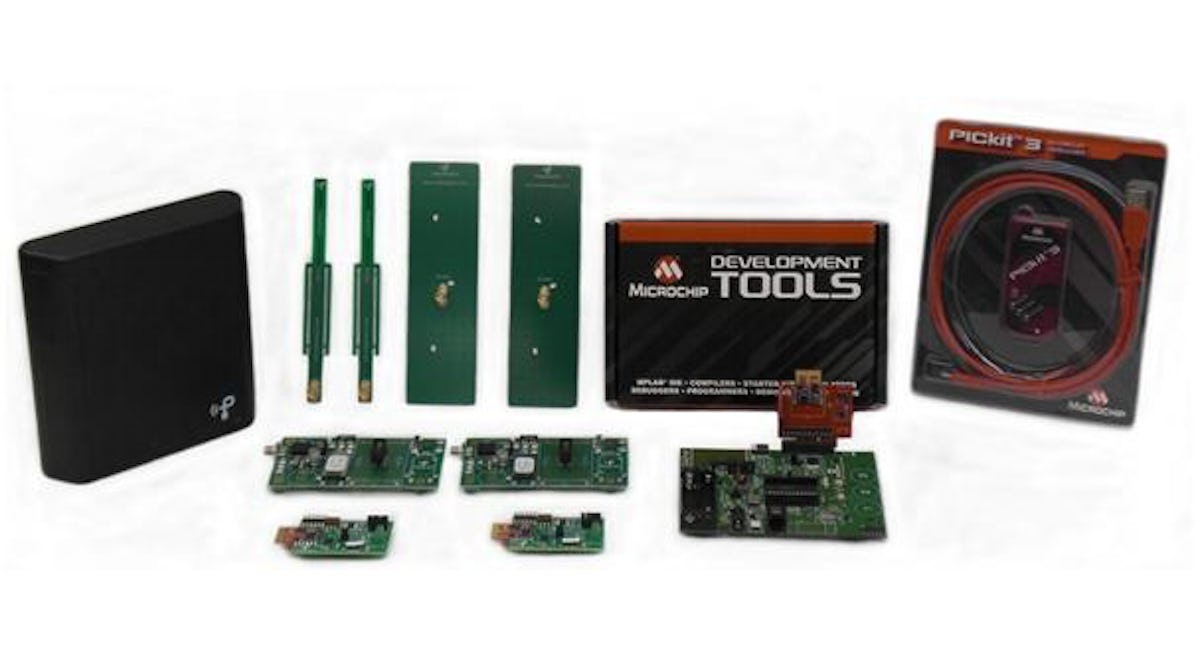 On the whole, the cross-company collaboration in bringing systems and tools to assist in energy harvesting product development is encouraging. Representations from every part of the energy harvesting value chain were present, including end users and application developers.
The IDTechEx gala awards were also well attended with exciting innovations from many companies being put forward for the prestigious awards.
The category winners were:
For further information on the awards please go to: Winners of the IDTechEx Energy Harvesting & WSN Awards
For further reading on the main conference with insight into some of presenters, please go to: Report from the IDTechEx Energy Harvesting and Wireless Sensor events
If you missed the event, the presentations and audio can be purchased here:http://www.idtechex.com/energyharvestingandstorageusa10/index-eh.asp
In 2011 the European version of this event will be held in Munich in June and the US version in November. See http://www.idtechex.com/ for details.
For more read : Energy Harvesting and Storage for Electronic Devices 2010-2020
PrintForwardTweetLikePinredditShare
Previous
Next