2011年8月11天 Raghu Das
According to IDTechEx research in the new report Wireless Sensor Networks 2011-2021 WSN will grow rapidly from $0.45 billion in 2011 to $2 billion in 2021. These figures refer to WSN defined as wireless mesh networks, i.e. self-healing and self-organizing. Wireless Sensor Networks will eventually enable the automatic monitoring of forest fires, avalanches, hurricanes, failure of country wide utility equipment, traffic, hospitals and much more over wide areas, something previously impossible. It has started already with more humble killer applications such as automating meter readings in buildings, and manufacture and process control automation.
The market for non-mesh wireless sensor systems in general is far larger and some proposed standards apply to both. For example, in addition to the above, the market for Real Time Locating Systems is $0.38 billion in 2011 rising to $1.6 billion in 2021. 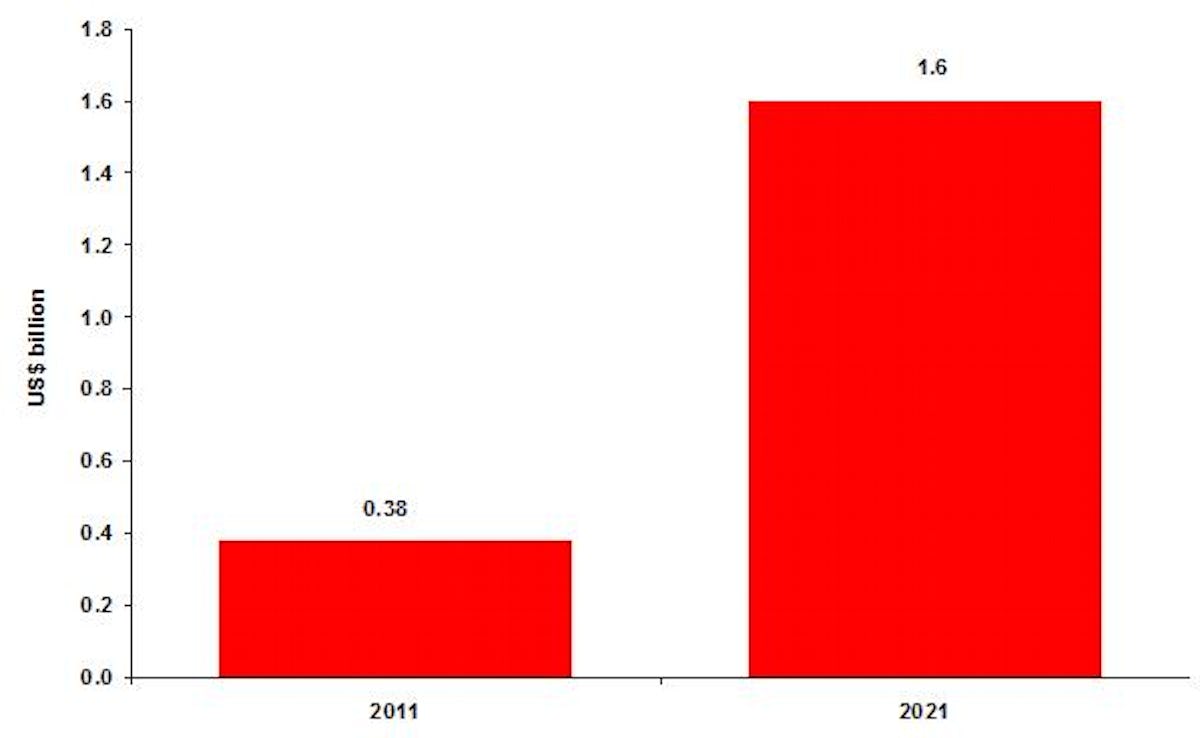 By far the biggest success of WSN has been in smart meters. Lesson number one - the Governments can make things happen faster than industry. In many countries around the world Governments have mandated that so called "smart meters" need to be installed in certain circumstances, such as new house builds or retrofits. More than 50 million have been installed so far. Now meter reading data is sent wirelessly, and the power is taken from the electricity supply so no batteries are needed. This is seen as a starting point to home automation - wireless sensors embedded in the house that will automatically communicate with the smart meter, your thermostat etc. It is part of the smart grid activity. Here, the ZigBee protocol is being employed.

However, those that supply WSN need to be aware. There is no single standard that has emerged as a clear winner. Indeed, many so called standards are not - many companies implementing ZigBee for example meet the basic criteria to use the ZigBee label but add further capability resulting in systems that are not interoperable with different sensors from different vendors. Many vendors, including giant system integrators that have their own proprietary wireless communications, hope that they may become the chosen default "standard". A small number may win. The industry is not gearing towards a more collaborative approach to allow many to win. This in turn is putting off adoption. Would you install tens of thousands of wireless sensors in your plant locations if it was a proprietary solution? What if that company would not exist in five years?
This reads on to the lack of scalability - party due to lack of multi vendors sensors working together - but no-one has really tested many tens of thousands of mesh wireless sensor nodes. Theory suggests key network paths may form and if they are removed the system can slow down to unacceptable levels.

Another challenge that vendors need to address is that many only offer hardware. Adopters are often on their own for the software - which they need in order to make useful decisions on the data collected to give the system a payback. IDTechEx note that in wireless sensing, the big successes are those that offer complete solutions. One example is Savi Technology, part of Lockheed Martin, that offer a full solution to asset tracking/visibility and the other is Ubisense, a successful UK company that has recently listed (and oversubscribed in doing so) based on a real time locating systems (RTLS) solution offering. Those selling only hardware now take note.
In addition, reducing the price and increasing the life of the nodes is key to the high volume applications.

In the new IDTechEx report Wireless Sensor Networks 2011-2021 IDTechEx forecasts the market in great detail. We study how the average price per node will drop from $9 in 2011 per piece to $5 per piece in 2021. The report looks at the latest activity and sees how these challenges are being tackled.

US ahead but Asia catching up

The USA dominates the development and use of WSN partly because of the heavier funding available there. US industry sits astride the computer industry thanks to companies such as Microsoft and IBM and WSN is regarded as a next wave of computing, so US industry is particularly interested to participate. Add to that the fact that the US Military, deeply interested in WSN, spends more than all other military forces combined and creating and funding start-ups is particularly easy in the USA and you can see why the US is ahead at present.
IDTechEx has profiled the main players in WSN, and their location by country is shown below. 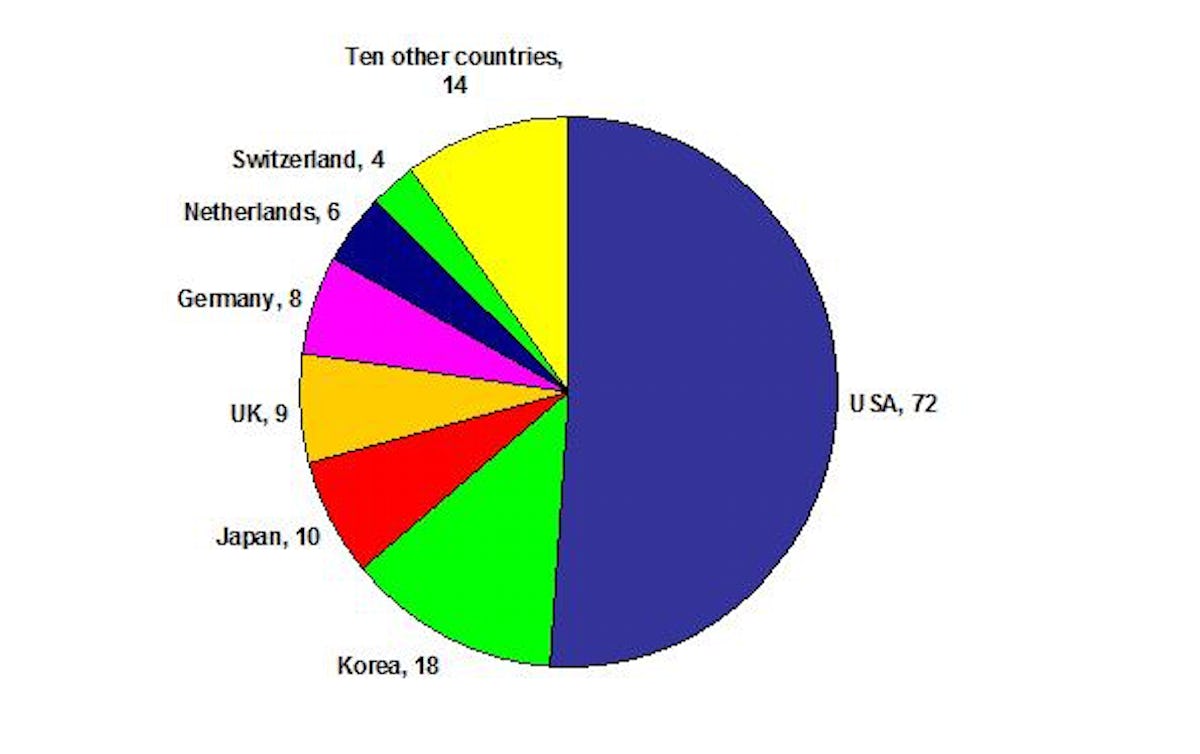 It was the Governments that created the first killer market for wireless sensors in smart meters, even though in reality most do not use the wireless features of the smart meters yet. The US military have spent more than $1.5 Billion on RTLS/sensor asset tracking solutions. Industry usually prioritises rapid payback, Governments don't always have to as they seek better security, safety, longer term efficiency etc. One such new project in Europe is "Living planIT", focused on making smarter cities. 22% of the global population lives in 600 major sized cities, representing 50% of the global GDP. Improving quality of life is therefore a very important challenge but also represents a great opportunity for sustainable technologies. Living PlanIT's aim is to create an ICT platform through aggregating existing and proven technologies that will be blended into real estate development. That would have as a prerequisite to embed technology (e.g. wireless sensors) into the construction process rather than rely on retrofitting which becomes more cost intensive.
In the first wave of the project, 2, 897,640 sensors will be embedded in Living PlanIT's "test-city" in Portugal. Requirements for these include standardisation, open API, horizontal integration but also, zero maintenance for embedded sensors that would have to meet lifetime expectations of over 30 years. Living PlanIT will be presenting at the IDTechEx event "Wireless Sensor Networks USA 2011" in Boston, USA on November 15-16 (http://www.IDTechEx.com/Boston). This is the only event on the topic to cover the latest progress with technology and adoption. You will hear the needs and experiences of many end users.
For more read Energy Harvesting and Storage for Electronic Devices 2011-2021
and Wireless Sensor Networks 2011-2021~
And attend Energy Harvesting & Storage and Wireless Networks & RTLS USA, November 15-16 2011, Boston USA
PrintForwardTweetLikePinredditShare
Previous
Next