2012年3月20天 Dr Peter Harrop
IDTechEx Printed Electronics events track the applications and technologies that are most promising. It may come as a surprise to some that the favoured chemistry and morphology of the printed devices remains that of inorganics and composites.
The industry seeks more participation from the inorganic chemicals industry for that reason. Although the substrates usually consist of routine organic compounds, they never represent the primary added value.
At the forthcoming event, Printed Electronics Europe 2012 3-4 April in Berlin, one third of the 94 presentations and masterclasses primarily concern organic compounds but two thirds primarily concern inorganic and composite devices.
The organisers did not steer it that way: the customers did. The inorganic chemicals and materials mainly involve metals and their oxides acting as conductors, semiconductors, dielectrics, barrier layers and light emitters. They tend to have superior electronic parameters and it is increasingly realised that optical transparency, physical, thermal and electrical stability and long life are also typically on offer from such chemicals.
The composites involve inorganics plus carbon nanotubes and graphene made into inks and/or formed into composite layers in or on devices.
Some of the most promising elements employed in research and production 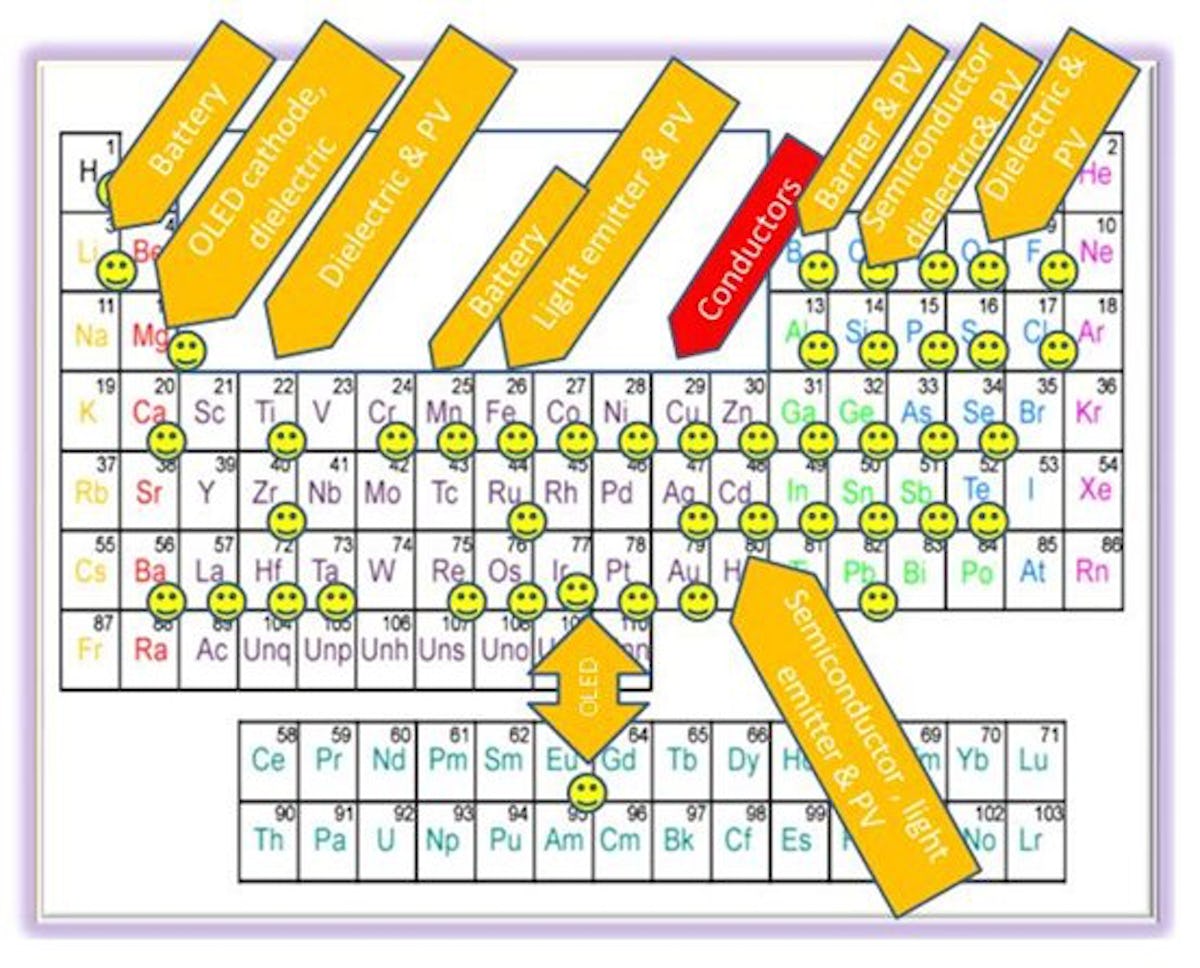 Source: Source: Inorganic and Composite Printed Electronics 2012-2022, IDTechEx, www.IDTechEx.com/Inorganic.
In the last year we have seen considerable progress towards commercialisation with printed zinc oxide semiconductors and nickel oxide thin film semiconductors becoming a more major focus of research. Titanium dioxide, in specialist forms, is appearing in commercial printed photovoltaics and the electrophoretics of e-readers but hafnium oxide is showing more promise as a high k transistor gate dielectric.
Both compounds and composites show promise as transparent conductive electrodes where current indium tin oxide solutions are favoured in the market but they cannot be tightly rolled - a market need - and they have cost issues.
Light emitting diodes are rapidly taking their next 5% of the lighting market thanks to employing a wide range of inorganic compounds, such as YAlOCe, GaN, GaAs and zinc oxide nanowires, and silicon or doped aluminium oxide substrates.
Now the first printed flexible, conformal versions are appearing to great acclaim, because they open up huge new markets as do the new printed barium titanate piezoelectrics. Inorganics are the basis of much of the new stretchable electronics and there are printed copper indium gallium diselenide photovoltaics in the market.
Printed silver nanowires and carbon nanotube composites compete as future transparent electrodes while 3:5 inorganic compounds in quantum tunnelling composites are coming to the fore. It is now highly likely that printed copper nanoparticles that sinter at low temperature will reduce the cost of many forms of printed electronics and printed silicon in many forms tailored to different applications has started to appear in the marketplace.
A sign of the times can be seen in the fact that the Japanese materials giant JNC Corporation, formerly known as Chisso Corporation, has declared that printed electronics is now its priority; at Printed Electronics and Photovoltaics Europe, it is presenting both inorganic and organic electronics printing materials.
BASF, known for organic materials for printing electronics has recently bought Sion Power which prints new lithium-sulphur vehicle batteries. The leaders now back all the horses.
The only report on the full subject, the IDTechEx,
Inorganic and Composite Printed Electronics 2012-2022 is updated more and more frequently as progress accelerates.
For more attend: Printed Electronics Europe 2012.
PrintForwardTweetLikePinredditShare
Previous
Next