2021 8월19일 Dr Peter Harrop, Dr David Wyatt
To mark National Aviation Day, a celebration of the history and development of aviation, IDTechEx analysts consider the future of electric aircraft.
For decades the theoreticians proved that bumblebees could not fly and were extremely irritated that they continued to fly anyway - using different equations. Much the same thing is happening with fixed-wing battery-electric aircraft. They were supposed to be impossible, but over one hundred are up there with around 1000 on order. These are small so they do not even need a new principle of flying. They just copy the Tesla approach with cars down below. The IDTechEx report, "Manned Electric Aircraft: Smart City and Regional 2021-2041" has detail on these electric fixed-wing aircraft as well as analysis of radical new electric vertical take-off and landing aircraft designs.
The host of small improvements usually multiply. Two 10% improvements benefit by 21% and the choice of improvements is vast. People wrongly think that a Tesla gets record range from a better battery, but equally important is safely running the battery nearer to its limit, eliminating thousands of parts and other detail. Range is even more desirable with small aircraft because range is a safety factor, so the aviators also seek 0.2 drag factor, eliminating one kilometer of cabling, hundreds of parts, and inefficient motors and power electronics.
Faced with reality, the naysayers of small electric aircraft now turn their attention to larger electric aircraft and vertical take-off being impossible. They have some point because we are currently in a silly season where many imprudent proposals attract a shower of money from eyes-shut investors hoping for the next Tesla. Theoreticians were right to point out that one design with a thruster on each wing tip and nothing in-between would fling itself out of the sky when one failed. They are right to caution that, with currently available parts, many multirotor VTOL fall out of the sky in 60 minutes from takeoff - no glide and not even parachute deployment at that height. City air taxi economics are rightly questioned by IDTechEx in their drill-down report, "Air Taxis: Electric Vertical Take-Off and Landing Aircraft 2021-2041". However, after doing the calculations, benchmarking and interviews, IDTechEx is certainly not negative about battery VTOL overall.
As IDTechEx advised, many are pivoting to VTOL with fixed wings, so they can fly as regular aircraft most of the time, endure longer, and, in some cases, glide in an emergency. One example is UK startup Vertical Aerospace floating at $2.2 billion following Virgin Atlantic and American Airlines placing orders for 1,000 of its fixed-wing VTOL - several billion dollars despite nothing yet in the air. 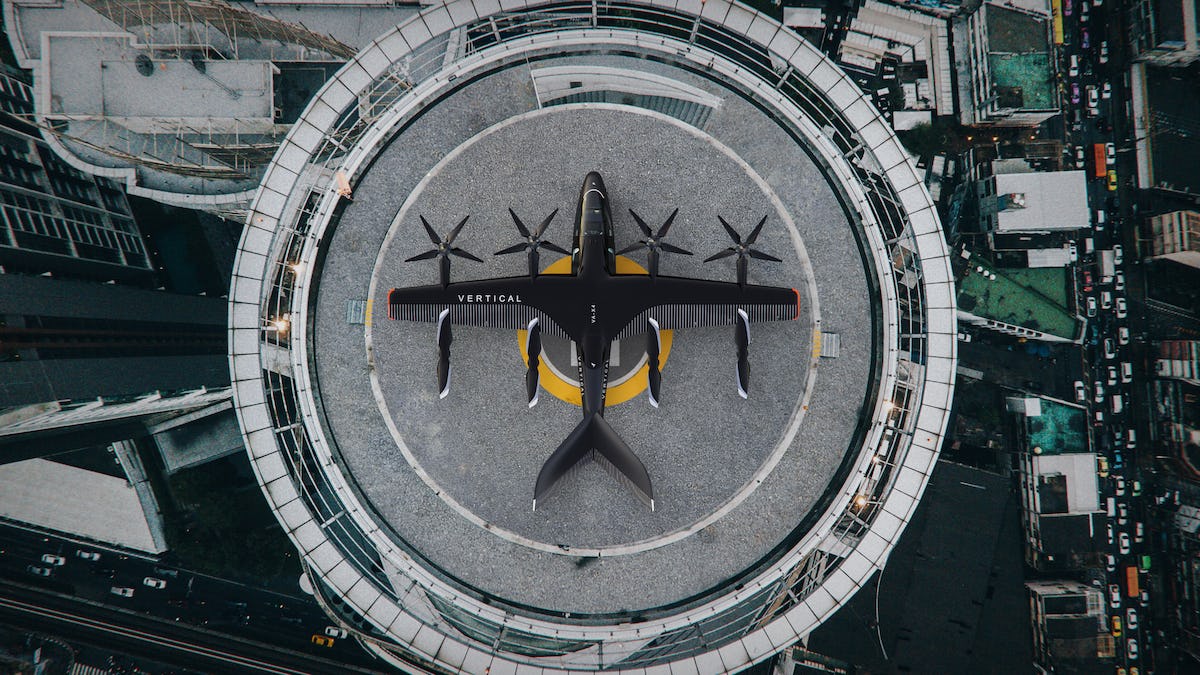 Vertical Aerospace VA-X4. Source: Vertical Aerospace
Contrast helicopters are inherently more efficient in vertical flight but without redundant thrusters and stability in wind. They help to erect high-rise buildings, hovering for one hour at a time. No battery VTOL can do that: they must address minimal hover business cases.
Back with conventional takeoff and landing fixed-wing aircraft, there are bumblebee-like calculations warning that none of the planned eight to 100 seat versions promised for 2026-2030 can fly. They use the wrong equations because two use the very different principle of ground effect and many others use the new principle of distributed thrust DT, involving multiple propellers along the wing. DT means dispensing with flaps and a large percentage of weight, space, material cost, drag, and runway length. NASA and DLR calculations and experiments support this.
The naysayers are also wrong because they ignore the "every little bit helps" approach for the larger aircraft. For example, today's polluting regional aircraft have 30km of wiring and poor drag factor but a born-electric one is like a Tesla. Tesla range comes substantially from regenerative braking and the aircraft equivalent is propellers reversing on descent and wheels that regenerate on landing. Indeed, powered wheels can make electric aircraft taxi and takeoff more efficient. For the biggest picture, see IDTechEx report, "Electric Vehicles: Land, Sea and Air 2021-2041".
Let us consider one example. Bye Aerospace has over 720 orders - over $250 million, with deliveries about to commence - from flying schools and air taxi operators for its two- and four-seat battery aircraft you can test fly today. It recently announced an 8-passenger battery-electric aircraft on a similar, "lowest total-cost-of-ownership" pitch but the 500nm range (loaded) was announced as dependent on a partnership with Oxis Energy for a new battery. The naysayers grinned when Oxis promptly went belly up. However, the giant LGChem is on a similar timescale to supply a similar battery and, like Tesla, Bye never was relying on one battery. They do the grunt work on all the little improvements. The following aspects of the specification reveal some of this and also the multiple safety features beyond even its long glide, emergency autolanding system and aircraft parachute.
This eFlyer 800 design is entirely new, from tip to tail. Aerodynamic efficiency is twice that of a typical legacy turboprop aircraft of similar size. High overall propulsive-system efficiency with high motor efficiency with low cooling drag. Two wing-mounted electric motors each with dual- redundant motor windings and quad-redundant battery packs. Modest range increases are offered from optional supplemental power solar cells (probably the satellite-grade that they trialed. It produces double the electricity of today's solar cars and aircraft) and in-wheel electric taxi.
Indeed, Jet It, and JetClub, fractional ownership sister companies in North America and Europe respectively, have signed a multi-billion dollar purchase agreement for a fleet of eFlyer 800 aircraft. In addition, L3Harris Technologies and Bye Aerospace have signed an agreement to develop an all-electric, multi-mission variant that will provide intelligence, surveillance, and reconnaissance (ISR) capabilities.
For now, Bye Aerospace is not doing a bumblebee with a new principle of flying but it can add distributed propulsion at a time of its choosing. Meanwhile, all battery-electric aircraft climb faster than polluting propeller-driven ones just as Teslas accelerate faster. Just be careful about saying that no battery-electric business- or regional aircraft can fly. There is a bumblebee smiling at you from above.
For more aviation-related research available from IDTechEx please visit www.IDTechEx.com/research/EV.
IDTechEx guides your strategic business decisions through its Research, Subscription and Consultancy products, helping you profit from emerging technologies. For more information, contact research@IDTechEx.com or visit www.IDTechEx.com.
Top image: Bye Aerospace eFlyer 800. Source: Bye Aerospace
PrintForwardTweetLikePinredditShare
Previous
Next